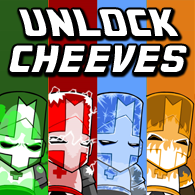 Unlock all 12 achievements with this concise guide.

Defeat any boss without using any magic.

). Do not use any attacks while holding RT.

Using a catapult, fling a knight with maximum power.

FLOWERY FIELD: After fighting three waves of enemies, each player must use a catapult to jump over castle walls. Walk into the catapult to enter, but do not press

immediately. When you get a feel for the timing, press

right before or exactly when the meter is completely full. If you don’t get maximum, the level can be quit and restarted.

FLOWERY FIELD: Each time you replay the level, you have another chance to get Maximum Firepower, so I recommend not worrying about it since there are dozens of characters to play with and getting the right timing on any character unlocks the achievement.

Navigate the Abandoned Mill without hitting any obstacles.

ABANDONED MILL: When the Giant Troll appears, move your deer closer to the left of the screen so you have more time to react to logs and doors. If you are playing with less than four players, the uncontrolled deer will gravitate toward doors so you can follow their movements.

ABANDONED MILL: Just like Maximum Firepower, every time this level is completed you have another chance for the achievement, so you can wait to unlock this through eventual repetition.

Complete the game using any character.

DESERT: Use the shovel found on this level to dig (using

) anywhere you see an “X” drawn in the ground, and dig up every spot you encounter. This should unlock by the time you reach the Sand Castle, and it is cumulative so it’ll unlock without much effort.

OTHER: After getting the shovel, don’t worry about any dig spots. If you’re going for the Animal Handler achievement or plan on playing this game a few times, you will dig up more than enough spots for the achievement.

Defeat any boss by playing one of his own minions.

BARBARIAN, BARBARIAN BOSS: Complete the King’s Arena (must be solo) in the first sequence of the game to unlock the Barbarian. Restart the game with this character and play until Barbarian Boss, after which the achievement should unlock.

In a 4 player game, resuscitate each of your fallen comrades at least once.

Collect all 4 princesses’ kisses in a multiplayer game.

COOPERATIVE: Play with a friend on the four following levels, making sure that your character wins each duel at the end: Barbarian Boss, Cyclops’ Fortress, Ice Castle, Final Battle.

Complete the Home Castle through Barbarian Boss areas without attacking any foes.

COOPERATIVE: Play through the first four levels of the game with a friend doing all the work. Move and block (hold

) only, hitting a single enemy forces you to restart the process.

Collect all the animal orbs.

Follow my list of all the Animal Orbs in order of appearance in the game. They’re all fairly easy to find if you know the signs to look for and which items to use. Here’s my in-depth guide:
[link]

Win 20 All You Can Quaff Online Matches.

I recommend playing with friends since not many people play this mode online. Find whatever technique works well for you in alternating

so the next fruit falls almost immediately.