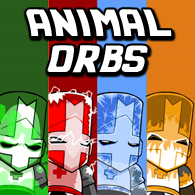 Find all 28 Animal Orbs with this concise guide.

These Animal Orbs attack enemies or directly assist in combat.

SNOW WORLD: Bring the Horn to the end of this level, or backtrack from Ice Castle and use the Horn next to the horn sign to summon him.

TALL GRASS FIELD: Bring the Horn to the second group of enemies, find a hut with the horn sign, and blow the Horn to bring him out.

ALIEN SHIP: Once the countdown starts, go past the energy wall and look for a door in the background. You can quit the level right after the unlock message appears.

These Animal Orbs help the player find items or collect consumables without affecting any stats.

MARSH: Bring the Shovel to the second screen of this level (with the graves) and find the “X” between the two groups of graves.

FOREST ENTRANCE: At the end of this level, look for musical notes in the background. Follow them behind the bush and Owlet emerges.

BLACKSMITH: Bring the Cardinal to Full Moon to get the Key Sword required to unlock the Beholder’s locked door in the Animal Ark.

TALL GRASS FIELD: Bring a Sandwich and 2 Bombs near the end of the level where a rock protrudes obviously (right after the flurry of arrows). Eat the Sandwich to move the rock, and use the Bombs on a crack in the wall to free this pet.

MEDUSA’S LAIR: Bring the Shovel to the first “X” and dig to bring him out.

DESERT: Bring the Shovel to this level and stop to dig up every “X” you see. This is easier than trying to describe the location, and it only takes a few minutes.

CYCLOPS’ CAVE: Walk out of the cave to find this Animal Orb.

HOME CASTLE: Bring the Shovel to the “X” below the veterinarian in the hay.

SAND CASTLE INTERIOR: Bring 2 Bombs and use them on the cracked wall at the start of this level.

THIEVES’ FOREST: Floating over a small stream, can’t miss it.

BLACKSMITH: Head to the very left of the Animal Ark and use Magic Jump (

with Magic 20+) or jump and alternate

until you get high enough to grab it.

MARSH: Just before the level ends, it can be found next to a fence in the open.

CYCLOPS’ FORTRESS: Bring 2 Bombs to break a crack in the back wall.

THIEVES’ FOREST: Bring 3 Bombs near the end of the level where you first encounter Trolls. Bomb the Troll or the crack to free it.

SNOW WORLD: At the end of the level, go behind the huts and it comes out.

DESERT CHASE: Keep your camel until you see a bandit with this Animal Orb, and use the camel to chase him and steal the pet from him.