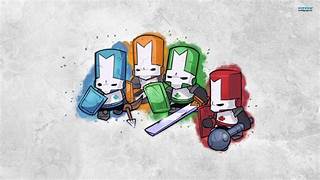 This castle crashers guide features tips to make insane mode much easier, ways to level up, and secrets you might not know!

We aren’t going to get into the obvious things like having an industrialist and fencer in your team, but I’ll tell you some tips i’ve learned. First of all, you should have a king in your team. the reason why is because of his unique healing ability. this allows you to take advantage of the fact that there is unlimited time to complete the levels, and heal yourself fully after each battle. Speaking of which, some people don’t realize king can heal multiple knights at a time. The way to do this is by getting everyone close to the king, and then healing. the white orb will hit all knights and heal them all. This technique will save you health potions, which you will need for when you are actually in combat. This does not work in a small handful of levels, including the Ninja pirates, and the alien ship.

This can be used in the infamous ice castle, but only in a few rooms. You can use it in the eskimoo area of the castle after defeating them. But what if you are doing insane mode solo without king and want to do this? You could use a pet troll, but it regenerates your health very slowly, and you will have to be patient. It will also take up your pet slot, so you cant pick another pet. It’s your choice if you want to use it or not.

If you are having trouble in the Wizard’s castle, then one thing that could help you is changing your team to knights that have magic that affects the cultists. All non-elemental knights like the grey knight,fencer, and industrialist have magic that affects the cultists, but these are not all of them. If you need to beat the castle with an elemental knight, then use the note below + the extra information ill give you. Not a single weapon is effective in all levels, and I highly recommend switching them to fit the level you are on. If you are an elemental knight ( Basic knights, Fire demon, etc) then you will not be using magic. Select a weapon that decreases magic to boost other stats to give you an advantage. It will be like a free massive stat boost.

Also, some enemies are Resistant to a certain category of magic, for example, Demon enemies are resistant to demon magic. Unfortunately, this does not work the other way around too. So it gives you a disadvantage. If this becomes a problem I recommend changing to a weapon that takes away magic to boost another stat, since you will not use magic anyways.

NOTE: you might be wondering, “What if I want to pass a level with a character that doesn’t give me an advantage?” well, just have your friends play the other characters for you, and return the favor later on. Don’t have friends? you can always hop on to multiplayer and send a friend request to people who you find useful or nice.

Most players know all these secrets, but a handful of people might not. This is for those who don’t know or didn’t spot the secret.

BOOMERANG: To get the boomerang you have to go through thief’s forest with the cardinal. you will come across a bush in the background that contains the hidden boomerang. The cardinal fill fetch the boomerang for you once you pass the bush. the boomerang can be used to stun enemies and it deals no damage.

I’m only going over the pet secrets here, husky pet “secrets” that have a dig spot mark don’t count.

First of all: lets make sure we all know what exp is and how to get it. Exp points are what you gain when you hit an enemy, and they level you up. 1 exp point=1 hit. Now lets get into the tips!

Since more hits means more exp, if you are looking to lvl up fast then do not place points into magic or strength, since more dmg means less hits. You should also equip giraffey(Giraffey boosts exp gain).

An efficient and popular way to level up is farming the troll mini-boss. He is found at the end of thieves forest, and takes the appearance of a large troll.

DO NOT KILL THE BOSS. Instead keep the boss alive and kill his minions for infinite exp. Once you have reached a decent level, continue and reach insane mode. Then you can reach lvl 99 using this exploit in insane mode.