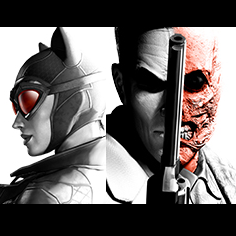 This is a quick guide for Catwoman’s final battle with Two-Face.

I have seen enough complaints about this encounter, I figured I would write a quick guide with some pointers on how to win this battle

First things first, I firmly believe that this battle is flawed in terms of game design. The rest of the game is great, but this battle has some problems that can confuse the player.
Here are the two major flaws, both of which a strategy needs to be built around:

Anyway, with those two things in mind we can now form a strategy.

Knowing that the thugs respawn and taking out Two Face will end the battle, the strategy becomes clear.

Simply put, you will want to distract most of the thugs so you can go after Two-Face.

So, here’s what to do: do a loud takedown downstairs in the back hallway with floor grates, this will eventually draw most of the thugs away. Now quickly escape upstairs to a safe location without being seen.

Hey you guys, get over here!

If needed, pause for a moment and wait for a thug to discover his fallen comrade. He will call out to his buddies to come down see your handiwork. Most of them will oblige and hurry downstairs.

Once most of the thugs are downstairs and on their way, now’s your chance! Go after Two-Face, scratch his eyes out! There may be a straggler on the far end, either silently take him out, or hope you get enough punches in Two-Face before he reaches you.

On easy and normal mode, you should have enough time to finish off Two Face in one sitting, HOWEVER on hard mode you may need to escape away and repeat the process once more.