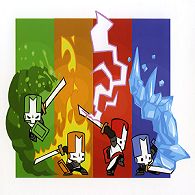 Animal Handler
Collect all the pets

Conscientious Objector
Complete through the Barbarian Boss without attacking any foes.
Tip: Just ask a friend to beat those stages with you just walking 😉

Deer Trainer
Navigate the Abandoned Mill without hitting any obstacles

Glork
Win 20 All You Can Quaff Ranked Matches

Kay Eye Ess Ess
Win a kiss from the four princesses in a multiplayer game. (Doesn’t need to be in one single game)

Maximum Firepower
Using a catapult, fling a knight with maximum power at the Flowery Field stage (right after killing the Beekeppers)

Medic
In a multiplayer game with four players, resuscitate each of your fallen friends (must be in one single game).

Melee is Best
Defeat any Boss without using magic

The Traitor
Defeat any boss by playing as one of his own minions.
Tip: Easiest way to earn this achievement is beating the Barbarian Boss with the Barbarian.

Traditional
Complete the game with any character.

01 – Beholder
Effect: Magic +2.
Location: Animal Ark, inside the locked door at the left. To open the door you will need to break it with the Golden Key weapon, located at the level Full Moon (you will need the Cardinal animal orb).

02 – BiPolar Bear
Effect: Mauls (final hit) enemies and friends (that’s why is BiPolar) who are near Death.
Location: Level “Snow World” at the end, before entering the cave, use the “Horn” and then he will come out.

03 – Bitey Bat
Effect: Randomly hold an enemy and do a small damage.
Location: Level “Pipistrello’s Cave” after defeat the “Pipistrello” it will turn into “Bitey Bat”.

08 – Frogglet
Effect: Pick ups near items with his tongue.
Location: Level “Marsh” after the first fight (inside the graveyard), search for an “X” spot to dig.

10 – Hawkster
Effect: Attacks downed enemies (already dead or about to die) and recover 1 fruit from them (only one fruit at a time). If in multiplayer a friend can get the fruits if they touch them before you (just like another animal orbs that bring things to you).
Location: Level “Tall Grass Field” in the beginning of the level, use the Horn (got from the Corn Boss) near a camp (after beating the first group of enemies), there must be an Horn symbol.

11 – Install Ball
Effect: Shoots enemies with a purple colored plasma ball.
Location: Level “Alien ship” after the countdown starts, destroy the first barrier controller and move up to the wall, there’s a “hidden” black door, behind him the install ball will be.

12 – Meowburt
Effect: Agility +3.
Location: Level “Parade” after completing the level and entering the “Cyclops Cave”, come back to the outside of the cave and the “Meowburt” will be standing there.

14 – Mr. Buddy
Effect: Allows you to dig faster.
Location: Level “Home Castle” in the first scene there’s one “X” spot at the left. Just dig it.

15 – Owlet
Effect: Finds food hidden in threes.
Location: Level “Forest Entrance” before you completing the stage there must be some notes appearing behind the bushes, it is there.

19 – Rammy
Effect: Knocks down enemies randomly, and in multiplayer while trying to kiss the princess, it knocks your friens.
Location: Level “Tall Grass Field” after defeating the Bear Boss.

20 – Scratchpaw
Effect: Strength +1, Agility +2.
Location: Level “Sand Castle Interior” at the beginning just break the walls with 2 bombs and get him.

23 – Snailburt
Effect: Defense +5, Agility -5.
Location: Level “Marsh” near the end of the level, before the cornfield.

26 – Troll
Effect: 1% increase of health regeneration.
Location: Level “Thieves’ Forest” after find the first trolls there must be one troll trapped, just break the wall with 2 bombs and get him.

27 – Yeti
Effect: Prevents player from being frozen by ice-based attacks (useful at multiplayer while trying to pick up the princess).
Location: Level “Snow World” at the end of the level, before entering the cave, he is behind one house at the right of the screen.

28 – Zebra
Effect: Helps find food in grass patches.
Location: Level “Desert Chase” when you see it (with one bandit on a camel), follow him, kill him and take his zebra.

In this game there’s a total of 30 characters and 2 of them are through the DLCs. Below is a list of each character and how to get it and some basic infos.

Well, that’s it, later I will add more pictures of them, keep commenting, giving feedback so I will update the guide. ;D