This guide is a guide to help players in singleplayer normal mode beat the corn boss. It also has a little bit about co-op.

This guide is about all of the things I have noticed when playing the Corn boss level.I have not looked up any websites or other guides for the Corn Boss. If there are any other guides for this with some of the same information, I’m sorry and I did not mean for it to happen. Also before I tell you know this, I know the tricks very well becase I made this. I can identify them, so if you can’t, it’s okay. I will also offer help to you if you want it, just coment or message me on Steam (NinjaBacon64). I will try to help as soon as I can. Please enjoy this guide.This guide will have two ways, of doing this the “hit and run” and the “Tank it” the “hit and run” will be explande by me (NinjaBacon64) and the “Tank it” by Teh Swag. 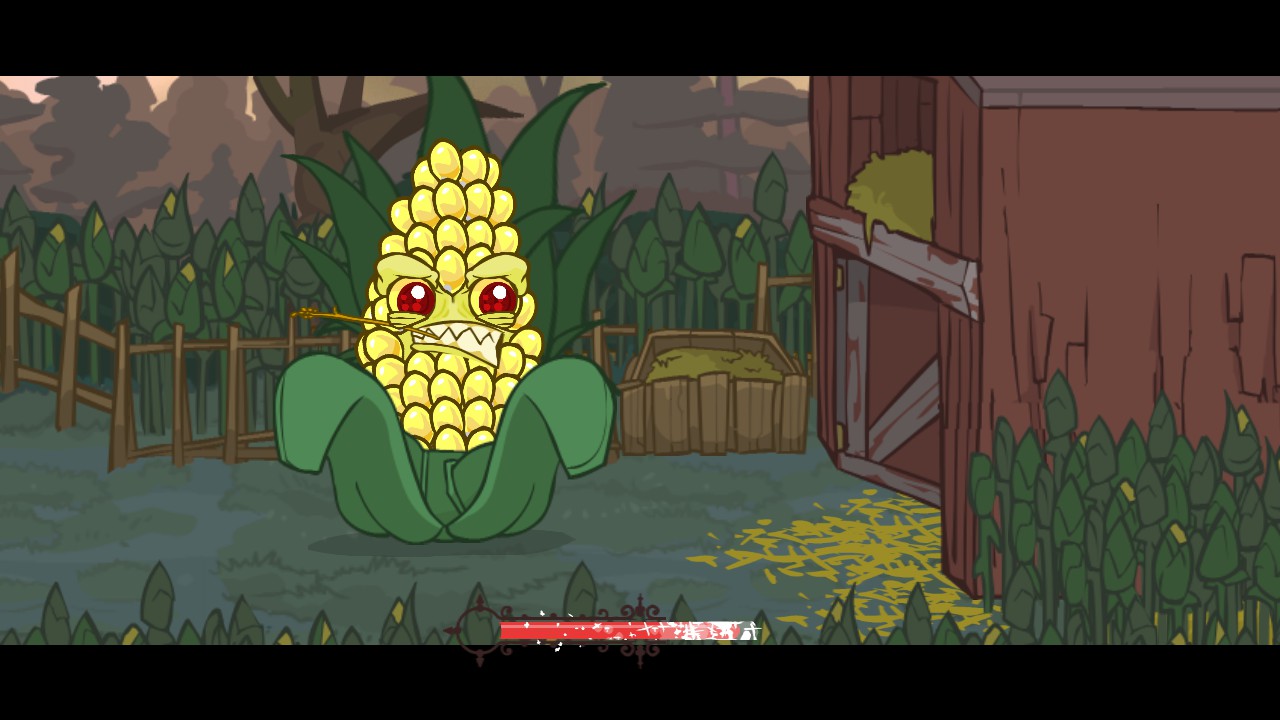 This is the corn boss. If you already know the Corn Boss and his attacks feel free to skip this part of the guide.

The Corn boss is a unique boss and one of a kind (the way he attacks and the way he drops food).
He also has 4 attacks. I will describe them to you in numbers so it is easier to understand. Keep in mind that all of these attacks knock you down.

Attack #1: This is the most common attack (as he uses it more and more the less health he has). This is where he burrows into the ground and he pops up later. .

Attack #3: This attck is not that special. It only really happens if you get to close. He will whip you with his husk (the husk is the green part on the side or the shell that the corn is in). This will hit all players and the NPC’s (I will cover this later on).

There are 2 best ways to attack the Corn boss it depens on how you play I like to stay back and use ranged attacks however some people like teh sawg like to use splash magic and I (and teh swg) will tell you how to use these two attacks Go near-ish to the Corn boss so that your splash magic will hit him, but you won’t be attacked by attack #3 or #4. If you feel like you are susceptible to die on the corn boss go stand in the middle of the two NPC’s until he hits them. If you feel like you aren’t, then you don’t need it.

Attack #1: For this attack you should always keep moving until the dust from when you run intensifies. After you notice there is dust even where you haven’t run, you should get ready to hit the corn boss with your magic.Or the better way for me (NinjaBacon64) is to stay still and wait for dust (like when you run) to apear then move up (or down) to avoid this attack not to the side he will attack you before can you get out of the way

Attack #2: If you’re bye yourself and the corn boss burrows but does not go for you then that’s when it is attack #2. The best thing to do is to run away to where the Corn Boss can’t go, such as the bottom middle. After he does his spinning attack part, go to attack him with magic.

For some people like me (NinjaBacon64) its best to use range magic or your bow to attack him instead of your splash magic.This one of the two best ways this is the “hit and run”attack run repeat
This is the way I do it as I like to “hit and run”in games like this I prefer to not die but willl take “more time” then others to do so.If you like playing games like this the hit and run methid is best for you.

If you use splash magic, it will not take as long, but there is a slight possibility that you can get hurt by attack #3 or #4. If you don’t want to get hurt by this, just use your shield when he starts to use the attack. (THIS WAY IS BETTER for people who like to tank)this is the “tank”just tank it.

So you’re almost at the end of this guide.

The NPC’s are the best thing to do if you dont feel you will be able to beat the Cornboss easy go to the NPC’s and stand there then when you see attac#1 move out of the way if you are sucsesfull the NPC’s will agrue and attac the Corn boss.(you do not need to do this as they dont do that much dmg but do not do this if you are useing the “Tank it” method they will make the Corn boss do attack #3 and #4)

Health potions are a realy good thing to stock up on. The best place to go is to the Swamp Store. They sell potions for the cheapest amount: 11 coins.

Also, if you are wondering, the popcorn drops every time you attack the Corn Boss. This popcorn acts as food and heals you one health point. Healing one health point is kind of stupid, so you don’t need to go out of your way to get it.(unless you’re near death or “under powerd” but if you are going to get it do it quicly they will de-spawn)

It is best to revive a player if you’re on co-op after the Corn Boss does attack #2.

Also dont run near other players as it will case dust to apper and you will not know if its the player or the corn boss. 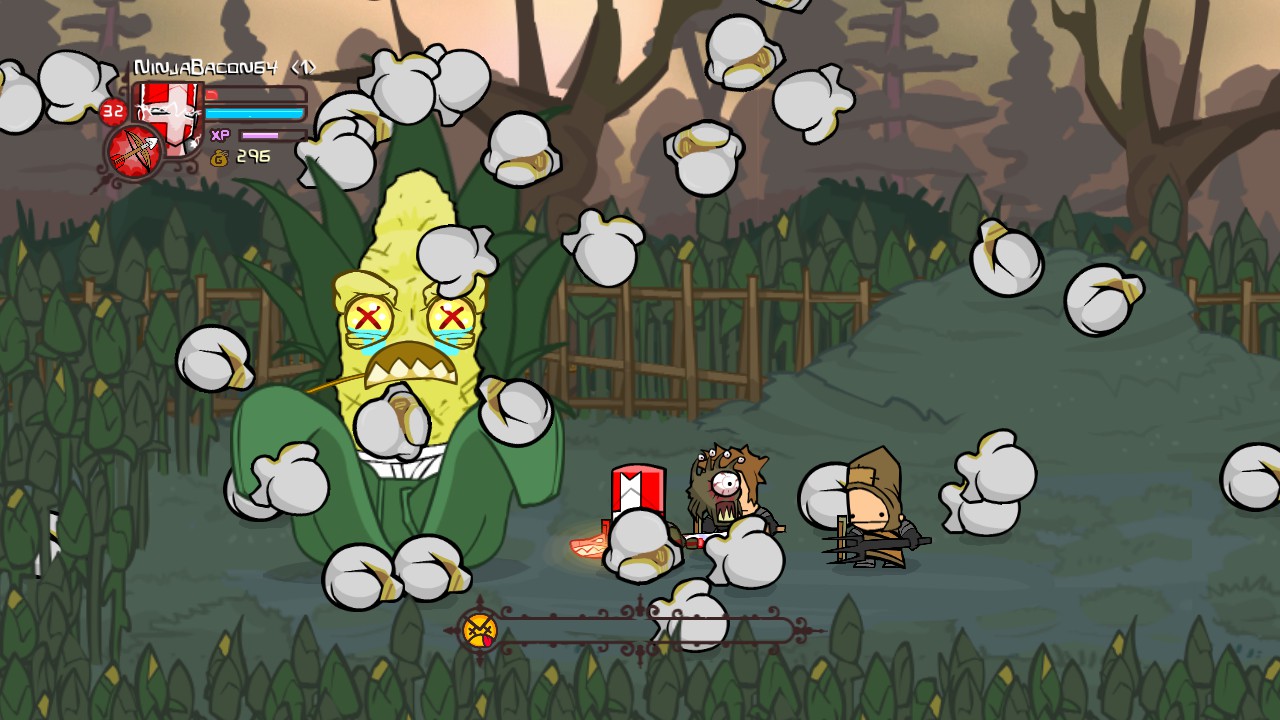 If you follow these steps and all goes well this will be your reward: the Corn boss dying and you will get a trading card. Good luck! PS. This battle can take a long time or it can be short so if it takes long one time that doesnt mean you are doing it wrong.

Thanks for reading this guide!

The basic guide outline screenshots and information was done by NinjaBacon64 and all incorrect information and grammar was corrected by Teh Sweg. If you liked this guide, please rate up and favorite it. If this guide made your life considerably worse, please leave a negative rating. As always, thanks for reading and liking this guide! (this next bit is by NinjaBacon64) although how this could make your life worse is unkown.