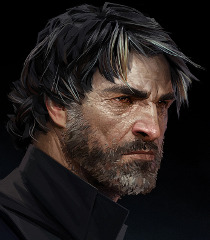 The canonical (?) choices made by Corvo, for those who wanna play by the book.

So for the most part I will be refferencing this video, made by King J. Grim.
His video is pretty spot on about it, and after watching it, I’ve decided to research it and make it a guide. He also helped answer some questions that I had that weren’t exactly explained to me, so huge props to that guy.

Essentially, Corvo thinks simply; he just wants to do what the late Empress would do. She considers all people, both weeper, bandit and guard alike, to be her people, and he is sworn to uphold their safety. This means that, cannonically speaking, Corvo stayed his blade from the innocent and who had no part in his framing (i.e. guards, maids, etc.), and he also saved them from peril, but still he wasn’t against shoving a blade into the throat of someone who’s wronged him.

While there is a fair bit of vengeance in him, he reserves it for only the people that had it coming, such as the ex-Spymaster Hiram Burrows. And he also cares for Emily, his child, and will do pretty much anything to see to it that she’s safe and sound.

As such, after escaping your cell in Coldridge Prison you need to pretty much ghost through the prison part, avoiding detection and only knocking out guards instead of killing them. Luckily, this being the first mission, it’s pretty easy.

There aren’t many choices, so just make sure to not kill any guards in the prison. That’s pretty much it.

After the pleasent boatride on the filthy river, with the nice moon illuminating your way, you’ll arrive at the shores of the Distillery District (which is a pretty unoriginal name if you ask me). The way Corvo played this part is simple, he first went to visit Granny Rags.

There, he took out the thugs in a non-lethal manner (if you find this hard, sneak up from behind them and snipe as many of them as you can). He accepted the Rune as a gift, but decided against poisoning the elixirs Slackjaw’s men are making, as it’d cause the disease to spread.

Corvo went through Bottle Street and avoided the first checkpoint, and then went under the bridge, and took the path to the side. Seeing the thugs loot the guard, he either ignored them or knocked them out.

Coming to the kennels, Corvo saw the Overseers harassing a woman and a Overseer. Knowing he should keep the people safe, and that confrontation is sure to ensure, he knocked both Overseers out, looted the safe without getting detected and rejoined Samuel by the docks.

After a good night’s rest, Corvo goes with Samuel to the shore of the Distillery District and starts the mission off by going to Slackjaw and helping him in exchange for the roof access to the Golden Cat. However, he decides to not get the information from the one guy via torture, as he’d rather kill the two guilty ones than torture one (even if he wanted it) man. The book also confirms this, as Corvo didn’t like Slackjaw’s way of interrigation.

Before arriving at the Golden Cat, he saves a civilian from a couple of thugs, presumably non-lethally but it is hard to say because of what happens next. It is presumed that Corvo went mad and paranoid when he came to the Golden Cat, and started carving a path to Emily, taking down any guard who was on his path, for he could not afford to lose her trail now. That was his first duty, and after that, he presumedly calmed down a bit and hunted the Pendletons down, taking them out one by one with no further innocent blood on his hands.

Coming back to the Hound Pits, and having returned Emily there, he’s tasked with fetching Anton Sokolov, the royal physician himself. Corvo most likely opted to come infront of the Royal Physician, as he then shot him with a sleep dart, and carried him out of the room. Before that, he rescued the people trapped behind that wall of light, as well as Anton’s test subject in his greenhouse.

With Anton as hostage, the Royalists have two methods of getting information to find out where to go next; scare tactics or a bribe. Corvo saw the scare tactics as too brutal, so he went to Piero to buy the bribe. Here we also know that Corvo expressed his disdain to Piero for spying on their own people, and that he didn’t flirt with Callista, as that would be seen as cheating on his now-late love, the Empress.

With the bribe succesful, Corvo is sent to the Boyle Estate to sever one last tie the Lord Reagent has.

For the most part this is easy, as we know that Corvo decided against killing Lady Boyle, as she’s still a citizen of Dunwall. He also had upheld Trevor’s honor by killing Lord Shaw in the duel. For the most part this mission’s meant to be enjoyed by the player. He also did not sign his name into the guest list, as he knew that the longer the secret is kept that the ‘Masked Felon’ is indeed Corvo, the better. We also know that, canonically speaking, the Boyle Corvo should’ve assassinated is Waverly, but seeing as how the game can give you any of the Boyles, it is understandable to skip over this one part.

This is where things got pretty complicated, and I had to resort on the YouTube video. Corvo enters the tower without being seen, and knocks out the guards as he then proceeds to answer the Intercom while the Lord Reagent is still on it. We know this, as we see in the battle with Daud and in other places that he’s not one to shy away from making his presence known to some of the more higher-value targets. He takes off the mask, and shows the Lord Reagent who he exactly is, which prompts him to call guards on Corvo. Corvo most likely ran away from the confrontation, as there were too many guards there, and instead opted to go through one of the doors upstairs to reach the Broadcast Tower.

We know that Corvo spared the propaganda spreader, and even took his advice on how to take care of the Lord Reagent, sneaking into his room only to grab the audio note, and play it throughout the city of Dunwall, therefore exposing him for his crimes.

But, this wasn’t enough for him.

Returning to the Hound Pits, Corvo is betrayed by the Loyalists, as they wanted to control the Empire. Their plan was to kill him with a poison, but Samuel saved his life with his quick thinking.

Regardless, after a few cutscenes, Corvo wakes up, thrown in a prison. Now it might be possible that Corvo went mad here yet again; he was in the territory of the man who murdered the Empress, and he was betrayed by his close allies. Grabbing the first sword that seemed to fancy him, he charged through the Flooded District, slaughtering any assassin unfortunate enough to stand in his way. This is supported by two things: in Daud’s dream, where he fights Corvo, we can see he killed his assassins, and at the end of Brigmore Witches, Daud is left alone to fight Corvo, as normally a few assassins would come in to fight Corvo before Daud calls them away.

We know Corvo retrieved his gear, as in the end of Brigmore Witches he has his trademark blade against Daud’s throat. As he beats Daud, he stands next to him, listening to Daud’s words of regret. He picks him up to go for the kill, but he stops. He stops looking at Daud and looks behind him, only to see the statue of the late Empress. Realizing that he’s slaughtered many of her citizens, he drops Daud down and walks away, grabbing the key and going back to the Hound Pits.

7) Return to the Hound Pits

Corvo now enters a different part of the Flooded District, where bodies of the plague are dumped. The one choice here is saving the survivors or not, and as hard as it was for Corvo, he decided against saving them, as that would potentially mean that the plague could spread furthermore through the town.

Having snuck past the tallboys and other random guards, Corvo returns to the Hound Pits, and finds out that there was a massacre there. However, he has no time to waste, as he has to find out where Emily is. Rushing through the Hound Pits, he stayed invisible and knocked out the guards who were in his path, as he had calmed down since his encounter with Daud and his assassins. He first checks in his room, where he overhears that Anton Sokolov and Piero Joplin are stuck in the laboratory and need help. He helps them finish building the arc pylon, and then requests that it merely stuns the guards, seeing as how the other option would read to mass genocide. He signals Samuel to come pick him up, and readies for his final job; to save Emily and to kill Havelock.

This is it; Corvo’s last mission. As he touches down, he says his farewell to Samuel, as he then readies himself. Moving quickly through Kingsparrow Fort, it doesn’t take him long to enter the lighthouse. It is unknown if he killed guards on the way, as before, with the Golden Cat, he went on a killing spree to get to Emily. He most likely ran through the lighthouse and the fort, killing some squads of the guards, and most likely got a few alarms rung, as eavesdropping on Havelock reveals that he knows Corvo’s coming, despite the fact that he wasn’t seen. Therefore, he must’ve had some sign that Corvo was approaching.

Corvo eventually arrives at the lighthouse, ready for the last encounter but he discovers that Havelock had poisoned the rest of the Loyalists, as he feels regret for betraying Corvo. Corvo makes his presence known to Havelock, who doesn’t engage in combat, much to Corvo’s surprise. As Corvo puts his weapons away, and picks up the key, Havelock decides to try and get the upper hand on him, striking him while his weapons are down. A heated battle takes place between the two, and here’s where things get weird. Harvey Smith said that Havelock either suicided or died, so Corvo most likely pushed him off of the railing during the fighting via Wind Blast or something like that.

After the confrontation, Corvo frees Emily, and can rest easy knowing that she, as well as the Empire, is safe.

Well, thanks for reading, this is my first ever guide and I’d like to know what all y’all think.

Thank you to King J. Grim for specifying some things and helping me out with this guide, as well as for making that video at the start of the guide.

Most sources come from Harvey’s posts on Twitter, and Dishonored – The Corroded Man, as well as a lot of theorizing.

If I missed any NPC encounter, please lemme know in the comments below, so I can correct it.