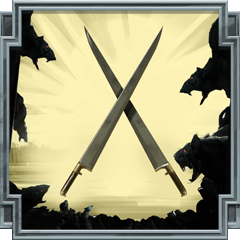 A complete guide to all the Brigmore Witches DLC achievements. There will be no video guides for ghost nor clean hands in this guide.

There are 2 unmissable story achievements and one kind of missable achievement in the Brigmore Witches DLC. They are as follows:

-Parting Shot:
“Deliver (or attempt) the killing blow on Corvo.”
Technically this achievement can be missable if you fail the fight.
Unlocked after the dream right at the start of the DLC.

-Breakout:
“Break Lizzy Stride out of Coldridge Prison.”
Unlocked after completing “A Stay of Execution for Lizzy”.

-Gangs Of Dunwall:
“Restore the Undine to working condition.”
Unlocked after completing “The Dead Eels”.

All Come To Ruin

-All Come To Ruin:
“Complete The Brigmore Witches in High Chaos.”

-Silence Is Golden:
“Complete The Brigmore Witches without alerting anyone.”

Complete the DLC without being spotted by any guards or enemies, you can track this at the end of each mission by looking at the mission summary tick box “Ghost (Never detected)”

-Cleanest Hands:
“Complete The Brigmore Witches without killing anyone.”

Complete the DLC without killing any guards or enemies (river krusts, hag fish and rats don’t count as kills) You can track this at the end of each mission by looking at the mission summary tick box “Didn’t kill anybody”

There is a total of ten favors in the Brigmore Witches DLC. Only eight, purchased in one playthrough are needed for the achievement.

Favors in this DLC work just the same as favors in the Knife of Dunwall DLC. They can be purchased before missions during the shop pop-up.

(Wouldn’t recommend getting this achievement while attempting the “Enough Coin To Disappear” achievement.)

-“A Stay of Execution For Lizzy” Total: 3 favors

-Wall Of Flesh:
“Use an enemy lifted with Pull as a shield.”

This achievement is actually quite simple. All you need is “Pull” level 2. This will cost a total of 6 runes.

Once you have unlocked “Pull” level 2 simply use it to hold an enemy in front of you during combat and let them be hit by an enemy bullet, sword strike etc.

I would recommend getting the achievement during the “Dead Eels” mission as enemies are plentiful.

-Enough Coin To Disappear:
“Survive The Brigmore Witches in Low Chaos with 10,000 coins.”

This achievement is a pain. Basically, play not killing anyone or many people and collect as many coins as possible without buying anything. You have to finish the DLC with a total of 10,000 or more coins.

EDIT 21/07/2020: It has become known to me that this achievement is actually a little bugged and can be unlocked on High Chaos making it considerably easier.

There are other great guides on steam detailing how to obtain the coin for this achievement.

The following information may be useful:

If a game from The Knife of Dunwall is not imported, Daud starts The Brigmore Witches with 3000 coin.

(Wouldn’t recommend getting this achievement while attempting the “Deal Maker” achievement).