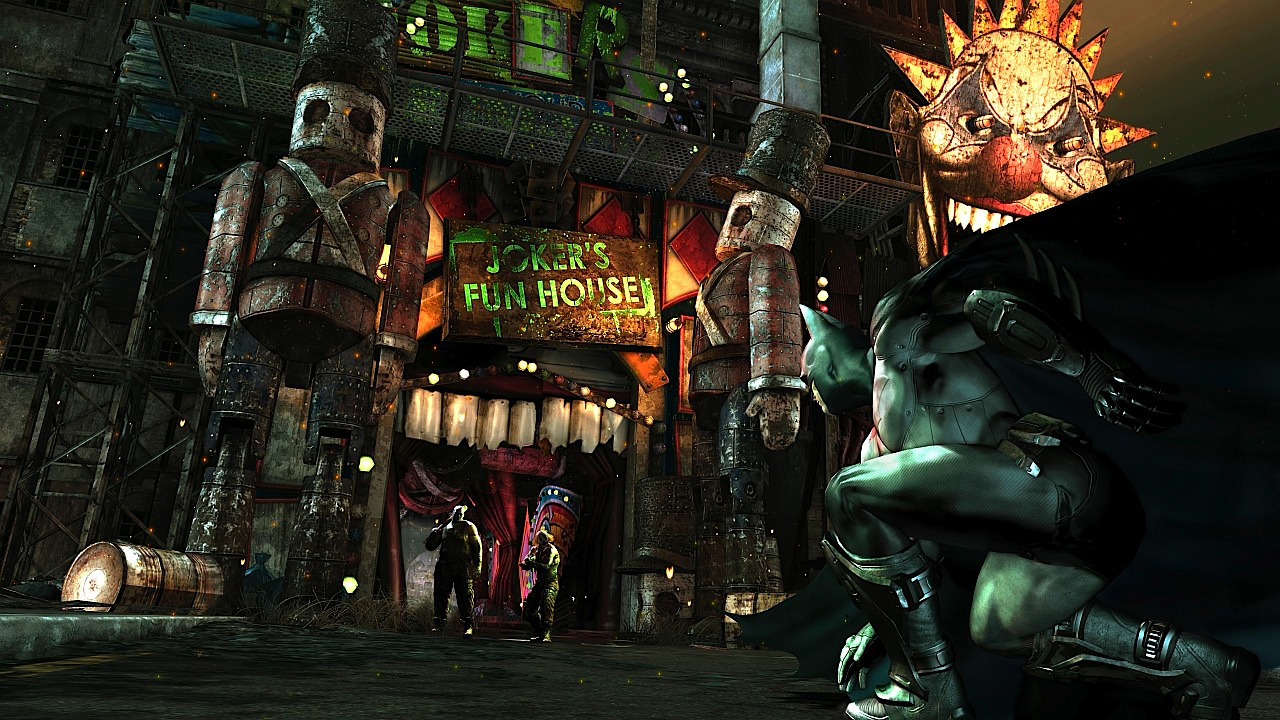 Jokers Carnival is one of the-if not the- most difficult challenges in Batman: Arkham City. It is obtained as a part of the DLC pack of the game. This guide will show you how to beat this map and obtain three stars.

What does this challenge consist of?

Basically Joker’s Carnival consists of a combat endurance challenge. It has 6 levels of increasing difficulty. The number of strikes required for each level and what each level consists of is given below:

Every time you reach the next level, you can press R1 to bank in your points to get more time. The higher the level, the more time. However, you will get less and less time as you repeatedly bank in at each level. The following table is the number of strikes necessary to reach each level WITHOUT getting hit:

You start out at level zero with about ten thugs in front of you, the closest one being to your
right. I have a tendency to go for him first, as you can get to him fastest, which matters a lot
when you are being timed, as it takes about two and a half minutes to reach and breach level six.
This is pretty basic stuff, and shouldn;t give you much of a problem.�Try to use the control
sticks and move between distant enemies to land critical strikes and avoid having to counter
(critical strikes raise the meter faster). After about ten seconds or so, you will reach level
one.

Level one is a whole lot of the same thing with the introduction of bats, poles, and a blade at
some point. Keep on plowing through enemies, jumping around the room until you get to level
two.

Level two introduces a single taser into the mix, which you want a thug to pick up as soon as
possible.This means try to avoid hitting the guy who;s bent over where the taser fell.Once
someone picks it up, use your Combo-Disarm/Destroy to take the taser from him and break it. Try to
avoid accidentally using it on a knife or pole, as it will just waste your time.Keep trucking on
to level three.

I am not sure if the armored thug appears on level three or right before you reach it, only
because I’ve had him appear during both instances, but for now avoid him.Your main threat is the
Joker muttering something about ninjas and then opening the gate to let the sword-wielding pests
through.Two will come out (though, as with the thugs, I’ve also seen three come out) and you
want to attack them immediately.Be wary of the ninjas’ dodge.When they do it, immediately
attack them again in order to hit them, but keep your eye out for the counter icon as well. After
you deal with them and the armored thug you should have already reached level four.

The beginning of level four is swiftly followed by an annoying buzzing akin to your alarm clock,
as well as some flashing lights. You should know what this mean: someone’s going for the gun
rack. Wait until the alarm goes off, and keep a close eye on the thug at the rack and as soon as
you see him turn around, firearm in hand, Combo-Disarm/Destroy his heiney. Proceed to beat your
way through to level five. It may also be useful to note this is generally the point Joker jumps
in, if you have yet to lose your combo from a missed attack.

Level five unleashes the appendage-less ugly that is Abramovici (well one of them at least).
He is more of a toy than a threat and will greatly help you once you master his timing. Once he is
out of the gate start swinging on him fast. Watch for both the counter icon for the thugs and for
Abramovici to pull his arm back in an attempt to swing at you, and immediately dodge-jump over his
head to his back side.Continue assaulting him and jumping over him until he falls. DO NOT
COUNTER! Many times, the counter will not protect you from Abramovici’s swing, and lets face
it: we’ve come too far to be broken at this point. During your assault on him you will likely
reach level six, but ignore that behemoth for now and instead, stay focused on Abramovici until you
take him down. Level five also throws a shield into the mix, which you can destroy if you want or
just ignore for now. Now to take on the giant monster growling in your face.

As you may have noticed at this point in time, you have a titan thug walking out of the gate a
few seconds after you reach level six. If you have just taken Abramovici down, you usually have a
decent opening to super-stun the titan. You want to make sure you have enough time to execute the
stun attack fully, and not be hit during execution. Usually, if you are in Freeflow mode, this is
easily accomplished as long as the counter appears after the first stun.Once he is stunned,
attack him until you mount his back.During your attack, you DO have time to perform a
Blade-Takedown if someone approaches you with a knife. If you didn’t destroy the shield yet, jump
over the titans� back if someone tries to attack you with it.

Once you have mounted the titan, DO NOT use the titan charge or shockwave.Use the control
stick to flail around with him, damaging as many people as you can for about ten seconds. After
that point, charge as far away from the crowd of thugs as possible and wait to be ejected from the
titan’s back. Stun him again, and repeat the process Before or by the time of his defeat, you
should have maxed the timer out, and gained the bodacious bonus of 1,000,000 points.
Congratulations!