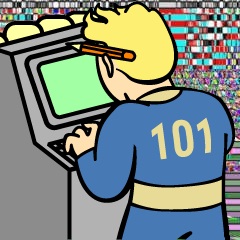 A list of all console commands, and the description on what they do.

This guide will show you every console command in Fallout: New Vegas.

Huge props to the Fallout: New Vegas wiki, I couldn’t find everything out for myself!
(http://fallout.wikia.com/wiki/Fallout:_New_Vegas_console_commands)

Using the console will disable achivements, but only for the current session.
If you use a console command, then save, then completly close the game, and open it again, achievement will work again, even on the save which you used console commands.

tmm <1/0> – Show/hide all mapmarkers (additionally : ‘tmm 1 0 1’ will show all map markers without discovering them and without being able to fast travel to them.)

EnablePlayerControls – Enables player controls (when disabled by quasi-cutscenes)
disable – Removes the selected object from the game (can be undone by typing “enable” while the object is still selected. Great for removing glitching objects.

enable – Used for enabling previously disabled objects. (Object still needs to be selected, as you cannot reselect an object that no longer exists.)

movetoqt – Instantly shifts you to the quest target or next optional quest spot.

player.additem <base id> <amount> – Get the indicated amount of the selected item.

player.removeitem <base id> <amount> – Remove the indicated amount of the selected item.

setownership – make the item yours by mouse left-click on item and typing setownership (for instance, a cabinet or a bed; already owned property will still deduct Karma)

unlock – unlock doors, safes, terminals or any other locked containers. You can get the unique ID of an item by clicking on it while you have the console open, causing it to print out on the command line, preferably after you type “unlock ” and a space. Please note that the “unlock” command may not work on a very limited number of locks, safes and/or terminals. However, it will open anything that is meant to be opened directly from the door/safe/container, and some more that are game breaking, like the elevator behind Benny’s room leads to a vault, and the doors that are not meant to be opened will lead to bottomless gray pits. If you jump into the pit, it drops you to the stairs under the Vault 21 gift shop.

player.srm – Self-repair of items up to your current repair skill. Note that you can’t repair all items in one command (‘A’ on PC) if the total cost of the repair is more caps than you currently have, forcing you to do repair individual items until the total amount needed to repair all items in a single command, is less than your total caps on hand. Regardless of method, all caps “spent” on repairs are paid to you, netting a total cost of zero. This is particularly handy before you sell items, raising their value considerably.

setpccanusepowerarmor 1 – make power armor wearable. If you can already wear power armor and type 0 instead of 1, you will no longer be able to wear it.

addperk – Select an NPC and type addperk 00031db7; this example would give the selected NPC Light Step.

resurrect – Revives non-player character and renews their inventory. This command will not undo the failure of quests.

resurrect 1 – Revives non-player character without renewing their inventory. This command will not enable the completion of failed quests.

player.resurrect – May cause a game crash.

killall – Kills all non-invincible NPCs in the nearby area. Use with caution, as some quest-essential NPCs you can’t see directly may also be killed. Also effects companions (rendering them “unconscious” in Casual mode but actually killing them in Hardcore).

rdf – resets all the dialog trees of all actors. A last resort for bugged dialog; can help in bugged quests or break them if used incorrectly. (i.e. choosing an answer, then resetting and choosing a different one may or may not break the quest based on such answers) Use with caution.
player.placeatme <base id> – Spawns Creature/Non-player character, static objects, and containers. They will spawn on top of you, so make sure you are in an open area if you spawn a lot.
Alternatively, you can use ‘placeatme’ instead to spawn things at selected object location instead of the player location. (useful if spawning several monsters and you don’t want to be at hit distance from them)

removefromfaction <faction id> – Removes non-player character from a specific faction. For example:
removefromfaction 1b2a4 will remove NPC from your own Player Character’s faction. These previous two commands are useful when you need to turn a hostile non-player character friendly in order to talk to them/begin a quest related to them that you otherwise couldn’t start. Add them to your faction, talk to them and complete their quest. Then remove them from your faction and they will return to being hostile.

OpenTeammateContainer 1 – Will open their inventory, as though they were a companion, for the transfer of inventory items.

SetRestrained 1 – Will cause an actor to stand in place, not engaging in combat or carrying out AI packages.

PlayIdle <X> – Plays an idle, where X is the idle’s EditorID string (not the FormID). The number of EditorIDs are too numerous to list here.

PushActorAway <X> <Y> – Causes another actor (variable X, an Actor reference formID) to go into a ragdoll state and gets impelled away at a force of Y, away from the calling reference (selectable by clicking on a ref in console mode or by using the ‘prid’ command)

player.setscale <scale> – 1 is default, 0.1 is ultimately microscopic, 10 is gigantic (not recommended for indoor use).

player.getav – Get the current value of Skills or S.P.E.C.I.A.L. amount. See Fallout 3 console commands for the list. These can be modified with the modav command.

player.advlevel – Levels the player up by one level, but does not add the experience points. While you gain all level perks, etc, you will not level again until you have made up all the points for the levels gained by this command and the experience required for the next level.

player.rewardxp 15000 – adds 15000 exp. Any levels gained will be granted immediately, one after the other. (You cannot subtract experience using player.rewardxp -n. Attempting player.modav xp -n displays the message “Actor value ‘XP’ cannot be modified in scripts or the console.”)

sexchange – changes the gender of your character.

player.setlevel X – Allows the player to set their level

resetquest <QuestID> – Gives the given quest, removing it from the quest log. Beware: often, this may force you to redo other quests to receive it once more.

movetoqt – Moves the player to the current quest target.

showquestlog – Shows the quest log which includes everything the player has encountered and done.

caqs – Completes all stages of all quests, even quests you have not taken on, basically completely wiping out all quests of the game and completing the game without ending the game.

setstage <QuestID> <Quest stage number> – Moves the quest in your quest log to the indicated quest stage. Recommended command for moving past bugged sections of quests rather than forcing the entire quest to become completed.

incrementscriptedchallenge <base id> – Increments the current value of a challenge by 1, does not work with all challenges.