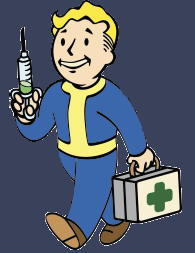 So you decided to mod your Fallout: New Vegas. Installed Texture mods, Quest mods, New Weapons and whatnot. Only problem now is, your game barely runs anymore. and if it runs it might just be for 10 minutes before you’re looking at your Desktop in a pretty frustrated way. Well then! this is then probably (and hopefully) the guide for you!

Thank you for reading my guide! And, it is my first so I hope it turns out well.
But you don’t care about that and just want to fix that damned game.
========
As to writing this guide my setup is running:

(As you might see it is nothing special and does the job just as well. This is just made for comparing.)
========
This guide is meant to help its readers stabilize their game after it has been modded.

WARNING!
Back-Up your game as it could lead to your game getting corrupt if not followed directly.

– New Vegas Anti Crash: NVAC[www.nexusmods.com]
= This mod as it says in its description takes care of overall crashes.

– ENBSeries: ENB[enbdev.com]
= You might think now, “Doesn’t this mess up your game more than it does good?” Yes, normally. but
I had found some interesting things in its configuration files which helped me out.

– CTD and Memory patch ENBoost: ENBoost[www.nexusmods.com]
= Makes it so Fallout NV can allocate more Vram to your game.

– Fallout 4GB Executable **Updated Version** : Fallout 4 GB Patch[www.nexusmods.com]
= New Vegas can only use 2GB of RAM by default. So now it has got double the amount of RAM
needed for its graphical processing.

– Yukichigai Unofficial Patch: YUP[www.nexusmods.com]
= Patches a lot of bugs missed by the Dev-Team. I strongly reccomend getting the Invidual ESM’s as you can just tick on or off the DLC you own or don’t own.

Coming back to this guide, there are a lot of helpful comments down below. Honoring their help and insight; I will put their recommended ideas in this guide! Happy modding!

xNVSE[github.com]
= A reworked version of the old and trusty NVSE; it delivers more features and stability.

New Vegas Tick Fix[www.nexusmods.com]
= A given alternative to; Stutter Remover. Meant to deliver the same result, get rid of the stuttering.

– EXPERIMENTAL New Vegas Stutter Remover: NVSR[www.nexusmods.com]
(As of being said in the comments; this mod might not work that well, so it is marked as experimental and has been moved down here. So, try using this when the other mods don’t work.)
= As it says in the description of the mod, takes care of overall stuttering.

For every file it is just the question of downloading it via Nexusmod Manager. or dragging and dropping it in the right category. All of which are on the either in the file “Readme” or on the modpage itself. So, we’ll skip this step.
======
At this point you’ll be able to run your game for a total of 10 minutes before it crashes.
Hopefully if you change some aspects of your Config (ini) files it will work for at least a whole lot longer.
======
– New Vegas Stutter Remover

You’ll want to find your stutter remover file in your NVSE Plugin folder and open it with notepad.

Under the line “Master” you want to match up your code with mine.

This will change out a few small things which (hopefully) make your game a lot more stable.

– Further down is a line “Heap” mentioned. this is quite an important line.
You will see a line called “Heapsize=250” or something in the matter of that. You need to change that to a higher BINAIRY number. I suggest you use 1024.

= What this does, It gives the game a bigger size in MB to work with and load at the same time. as it was 250 megabytes before. It is now 1 GB. This is best explained by: Gopher =And yes, I know it is Skyrim but it works in the same way. and please, DO NOT DOWNLOAD THE SKYRIM FILES! It is just a demonstration only.
========
Now upon loading the game. You might see that certain objects are seen through complete mountains!
To get rid of this you are going to need to open your default game launcher and turn off
1. Antialiasing
2. Anisotropic Filtering 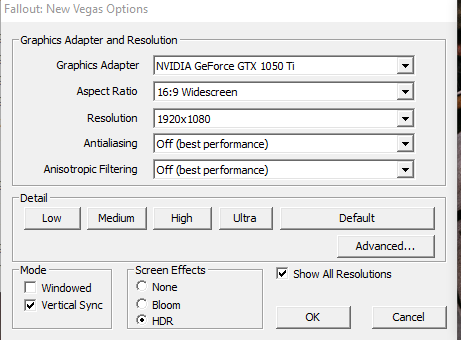 (You also may need to play around a bit with these settings if your game is still crashing.)

Hopefully this guide will have helped. And you finally get to play for a longer than 10 minutes.