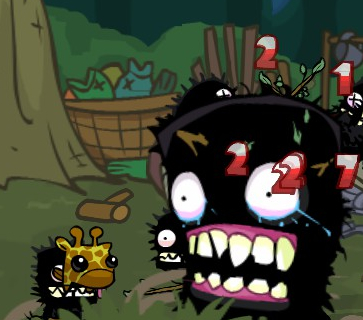 This guide explains possibly the fastest way you can level up your character. From reading Wishengrad’s guide on how to level up fast (juggling a bunch of enemies at once can greatly increase your XP), I looked for ways on how to keep the multiple enemy juggle going over and over again. Then I thought of the Troll Boss when I came back to him on Insane Mode one day.

This has to be done on Insane Mode because the enemies are buffed, and the Troll Boss has a huge amount of health. It is hard to do, which explains why I’m making this guide for the public. You will be surprised by how fast you’ll level up.

You cannot start doing this farming technique too early. You need to have a character with high agility and max defense. Without the health increase from Defense, you would die more quickly and often. Without the speed increase from agility, you won’t be able to dodge the attacks very well. It is very important to have high agility and max defense, or close to max. Magic is best not to be used while juggling the trolls, or at all.

The most important thing about this farming technique is you need to have low or no strength. It may take longer to get to the troll boss, but you’ll be able to juggle the trolls longer without them dying.

For faster leveling, you might want to have Giraffey, because he helps you level up faster, giving you more XP for every hit. While Giraffey make you level faster, he doesn’t necissarily make you level fast. I, Aichomancer, recommend using Hawkster, or Rammy. Hawkster will retrieve food from dead trolls, and he’ll bring it over to you so you don’t have to go running like a chicken for it possibly taking unwanted damage. Rammy is helpful, because of the immense ammount of protection he provides. First of all, he does low damage, and can hit any troll that gets in his way. He also doesn’t even need to be charging to hit a troll. (Although he will likely hit most of the trolls that he does hit while charging, but you’ll get xp for every time he hits an enemy,) the best thing about Rammy, is that when you’re getting cluster f_cked by the trolls, where you’d normally either give up and die, or sit there for five minutes waiting to get out of the gang bang, rammy will come to your aid, and knock down all of the trolls, allowing you to continue with your farming.
For a weapon, I have different selections for different reasons;
if you have high agility but low or medium defense, use the Necrotana, because it grants a sweet bonus of +7 Defense, and a measly +2 magic.
If you have high defense but low agility, you can either use the Skeleton’s Mace, or the Ninja’s Sai.
You could also use the Glowstick, or Cult Minion’s Sword, because of the -4 Strength, and the +5 Magic and Defense. The critical hit can make you lose xp, but compared to having a weapon with neutral strength, you’ll get more XP.
If you don’t know that stats for one of the swords or you don’t know how to unlock it, refer to one of the weapon guides.

You are going to have to fight the Thieves on your way to the Troll Boss, it is worth it once you do get there and do the farming right.

Once you reach the village and kill those three Theives at the bridge, run forward until you come upon the Troll Boss. Do not start attacking her imediately. Wait for her to spawn several trolls. While waiting, and while there’s a lot of trolls in the area, you want to strafe around the area how the enemies do it. This is why the speed increase from agility is very helpful.

Keep strafing around the area until she stops spawning trolls, or when you think there’s enough on the map.

Line up in the middle of the map and jump up, and start doing only light attacks, mostly just slashing. Make sure there was a troll in front of you when you jump up and start the juggle, but not too close, or else he could slash his stick and knock you down before you’re able to hit him.

Keep juggling the one enemy, not turning at all, just going forward, until you reach the end of the screen. You need to stay at a somewhat low altitude so that you can hit other trolls and bring them into the juggle. If you’re low enough for a troll to slash you, chances of him actually hitting you and knocking you out of the air is probably at 99%. For the troll being juggled will end up slamming into the troll and knocking him down, most likely bringing him into the juggle.

What to Look Out For

Every farming technique has its cons.

Being knocked out of the air by a troll is uncommon, but can happen. If it does happen and you’re knocked onto the ground, press space when your body hits the ground and you should jump right back up without having to wait.

If you’re too slow, the trolls will get an advantage of you and a bunch could all start hitting you one at a time. Bring your shield out when you can tell a bunch of them are gonna start attacking you at once, and hold it out. Notice that they’re pushing you the direction they’re facing. While being pushed some other trolls behind you could attack and turn your shield around. When there are no trolls ready to attack behind you, or they’re too far away behind you, just pull your shield back, and then run back, continuing a strafe until you start your next juggle. You always want to strafe when you’re not doing a juggle, and on the ground.

But be caucious of where you’re being pushed to while they’re attacking, I’ve had instances where they completely trapped me in a corner and the only way I could get out was by dying.

What about the troll boss? Do we have to do anything about her?

You don’t really have to do anything with her while you’re only trying to level up. She will walk towards you and can walk into your juggle, ending up pushing the juggled trolls back and possibly ending your juggle. This commonly happens, but it’s not too big of a problem.

ALWAYS pay attention to your juggle, where you land, and where the enemies are. It is important to keep a good juggle going and to avoid being hit. The Trolls will do 80 damage, but their damage will depend on your defense.

This technique is hard to use and hard to get used to. If you die from the trolls, don’t worry. It wasn’t easy for me to do when I first tried it. I understand it’s fustrating to fight through the forest all over again. To avoid it partially, you could possibly try killing the Troll Boss first, until you finish the level with killing the Catfish, then you don’t have to go through the enterance all over again.

Once again, this guide is related to a lot of the XP guides, but it’s not enough to make this guide a repost. And if this has been done before, I apologize. I haven’t made a guide in a long time, and the other one I’m working on takes a lot of work and time to make. I don’t know when this new guide will be finished and published.