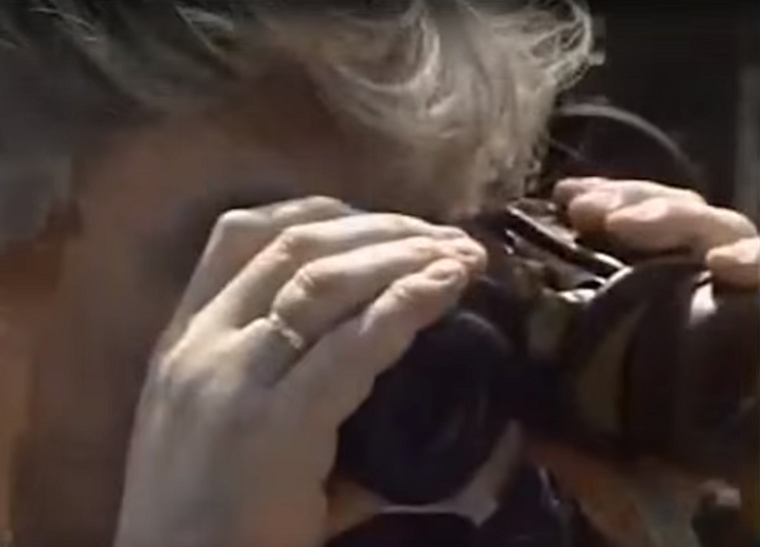 Are you an experienced player tired of taking the typical route through Primm and Novac?

This guide instructs how to easily follow the route north of Goodsprings, instead of going towards Primm, Nipton, and looping north to Novac. Bear in mind that this is reccomended for only experienced players as someone who is inexperienced may find difficulty traveling through the different route as many enemy of the enemy encounters along the way are abnormal for a low level player. 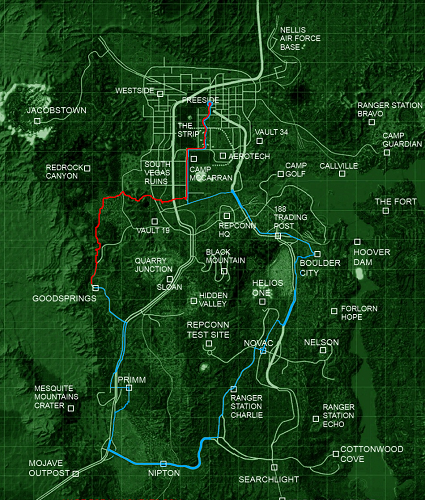 An overview of the route taken. In blue: Typical route of Courier In red: : Shortcut 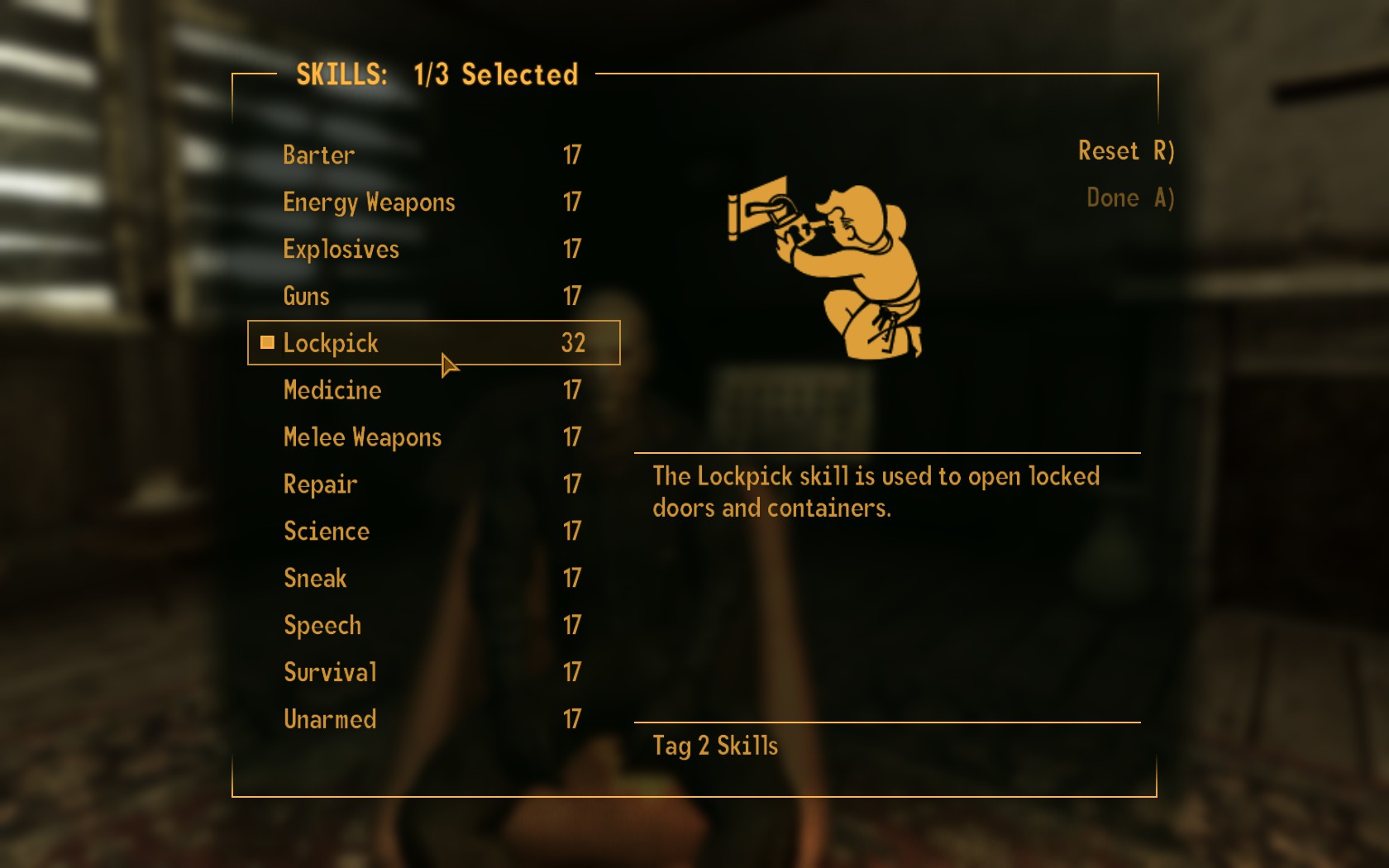 The only requisite for this is that you have at least a Lockpick skill of 25. Beyond this, the only other optional steps would be to select Speech and Explosives as well in order to rally all of Goodsprings during the Ghost Town Gunfight quest if you choose to do so. 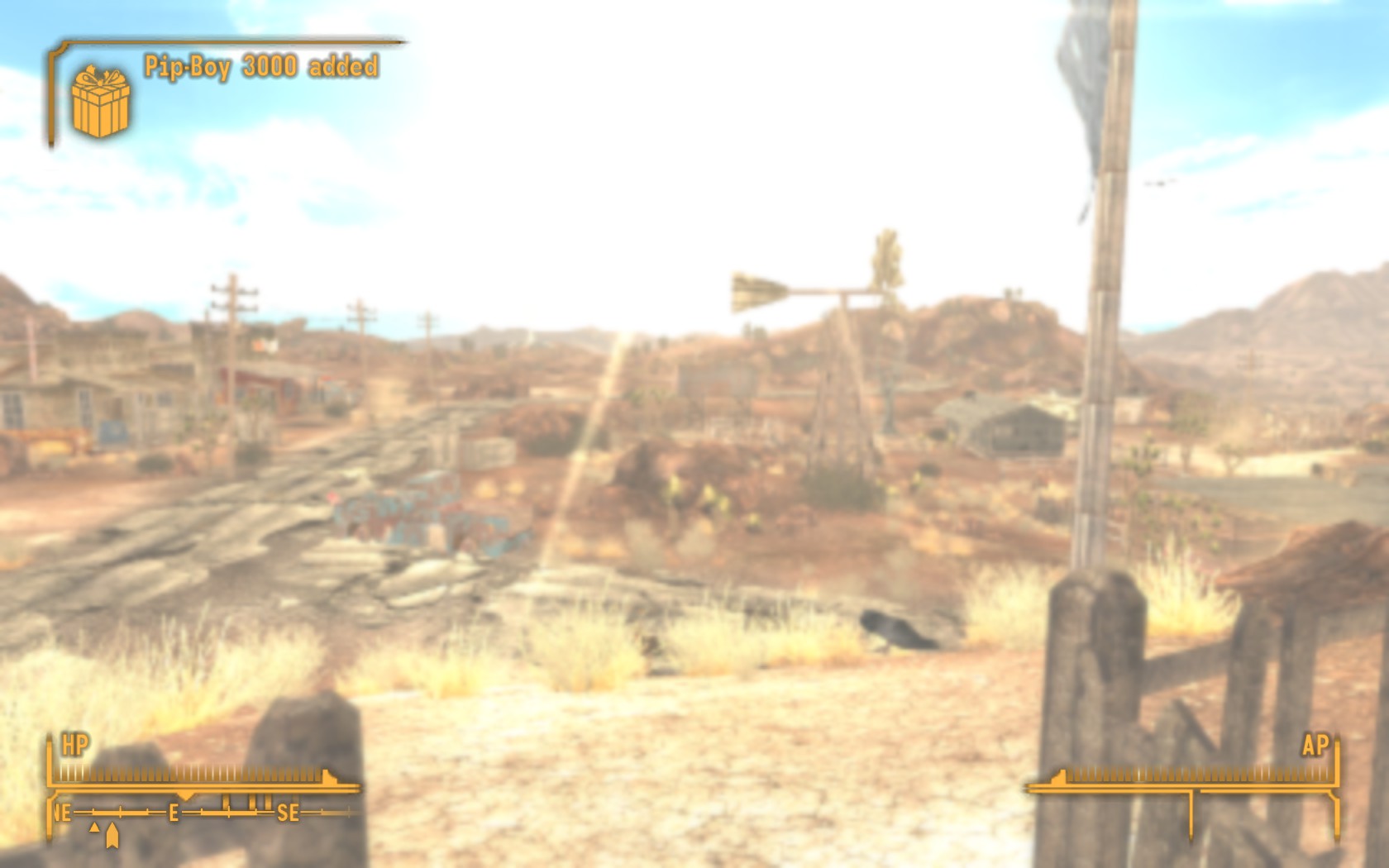 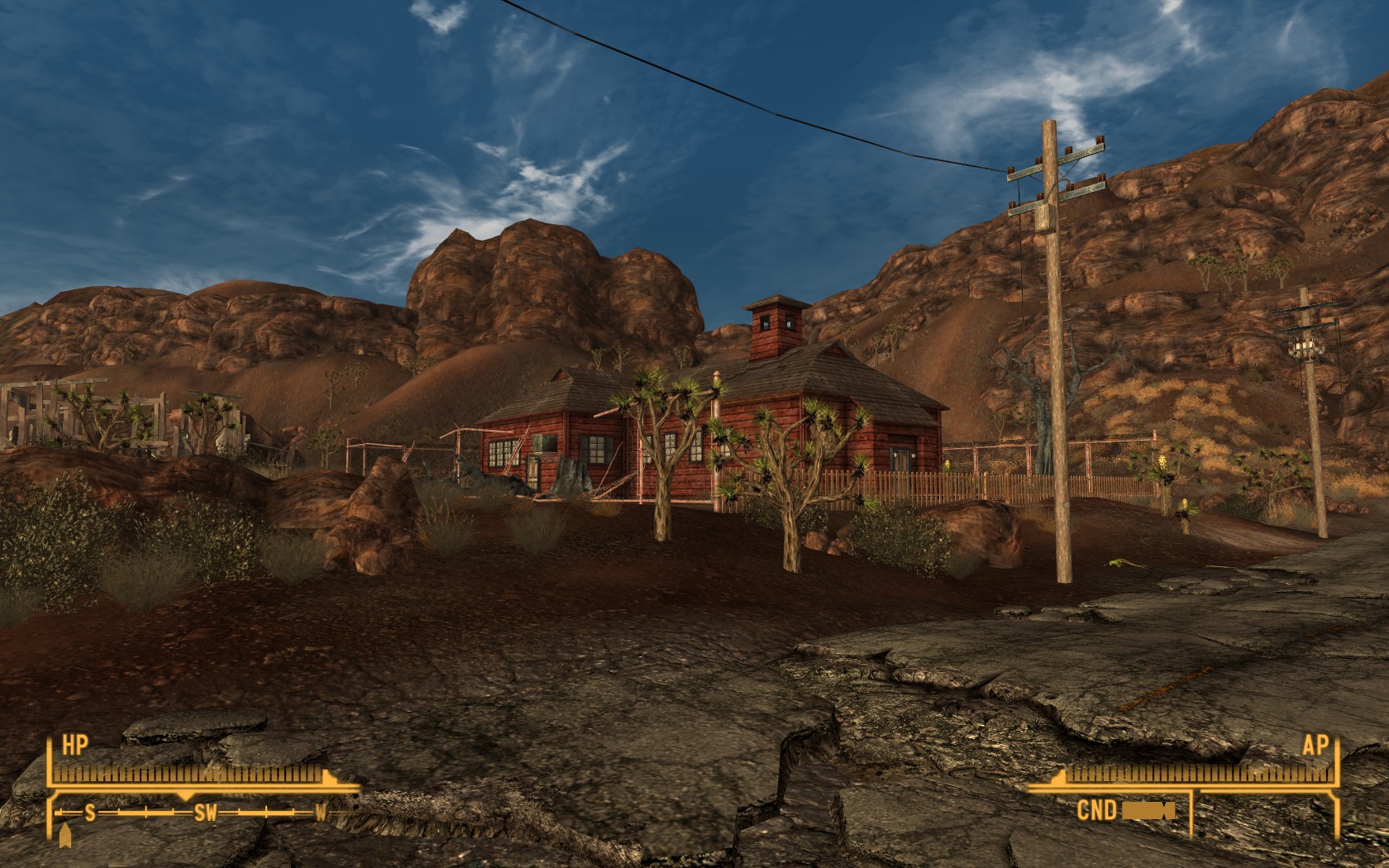 To the Goodsprings Schoolhouse

From here you must use the 25 or above lockpick skill you chose and use it to lockpick the safe inside (easy difficulty). 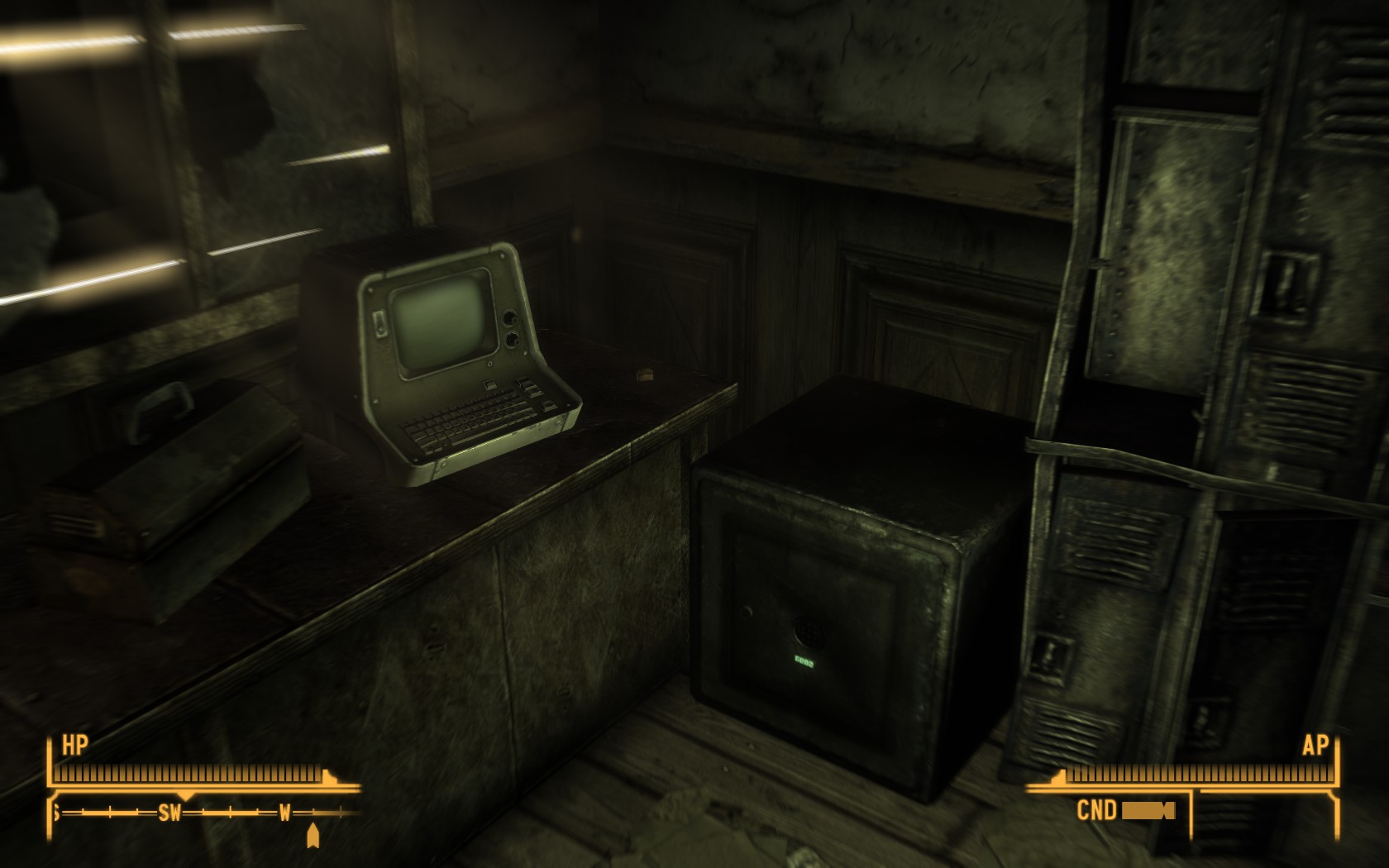 Inside you will find a Stealth Boy: 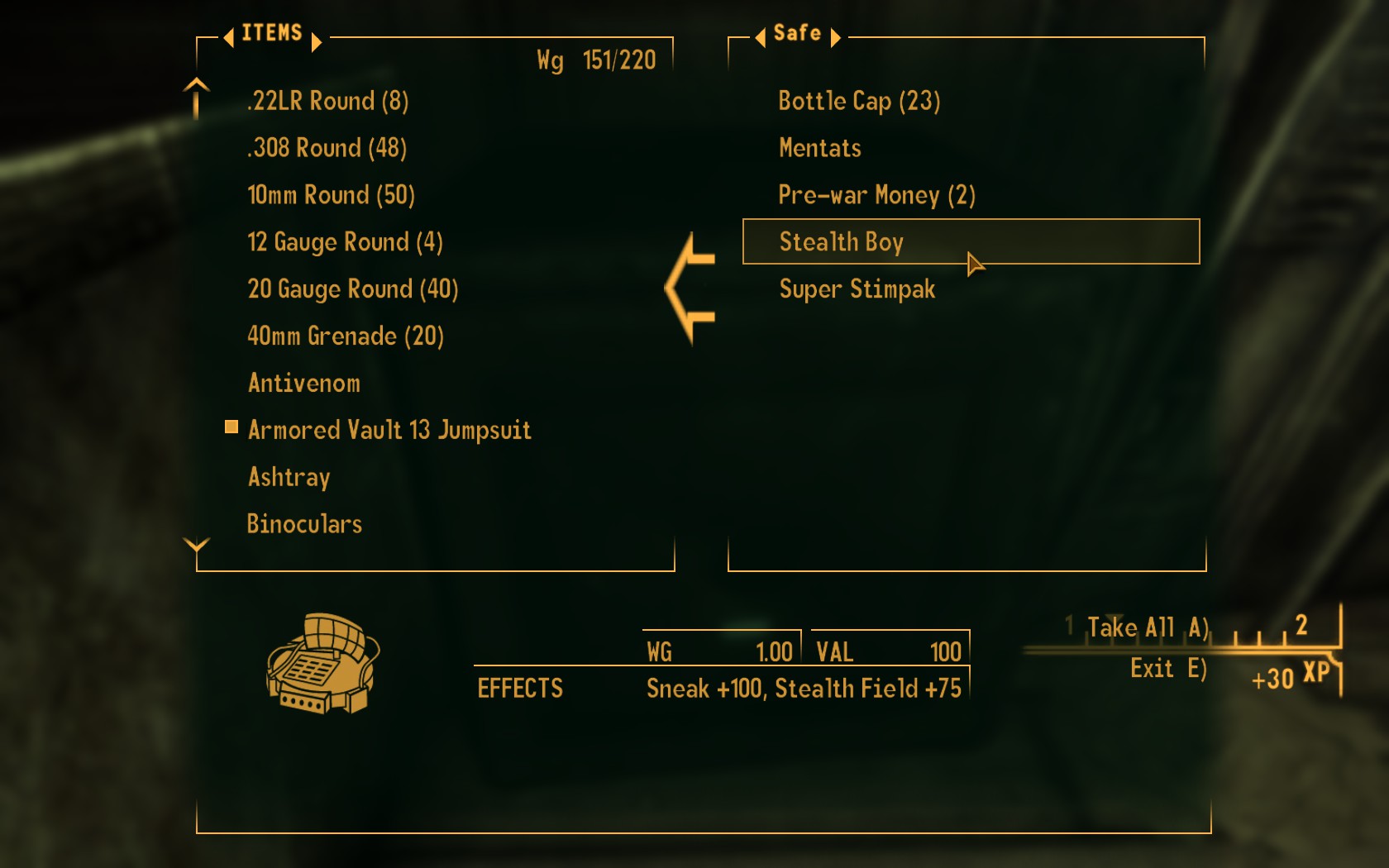 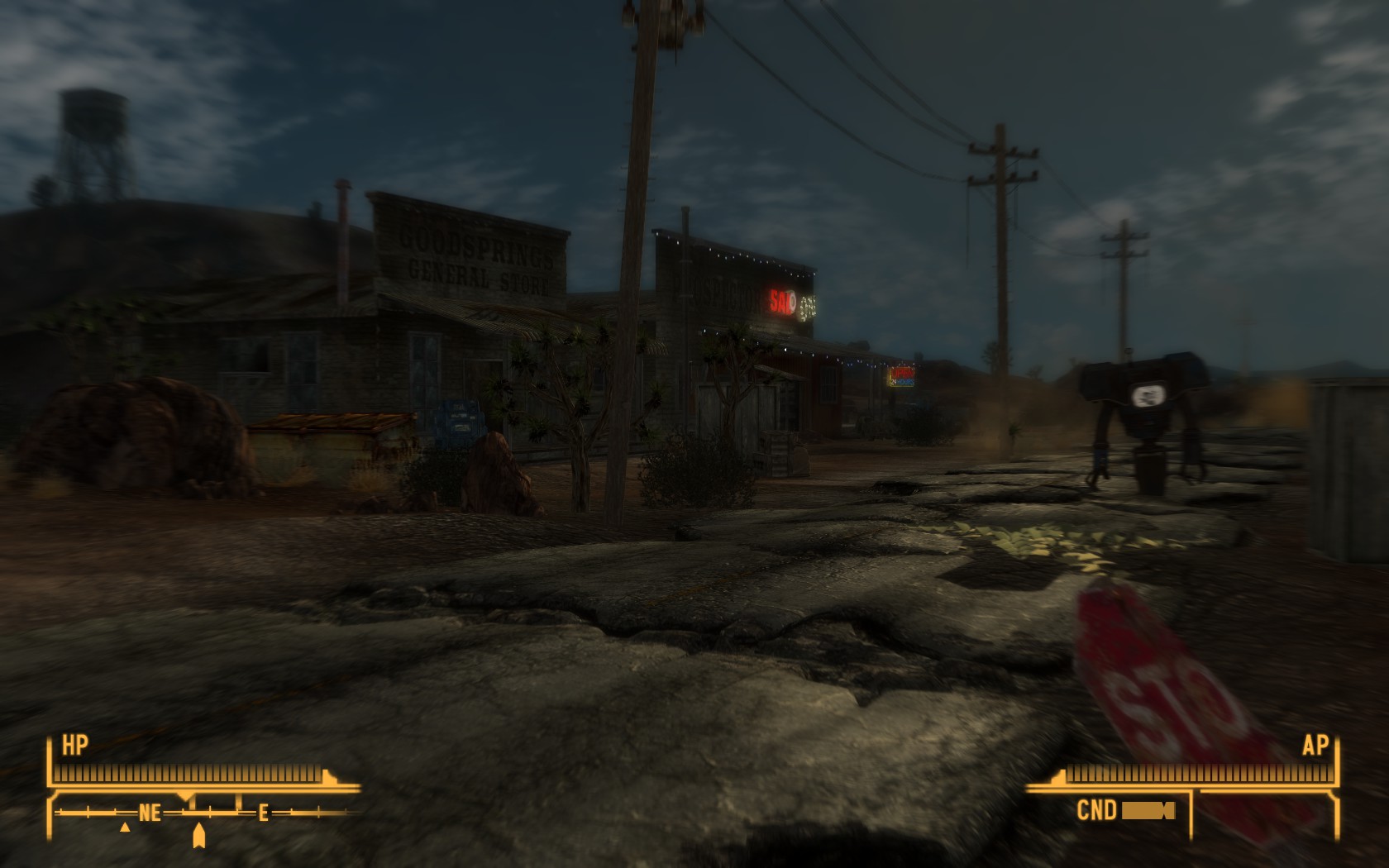 It is at this point you can either choose to pursue the tutorial and “Ghost Town Gunfight” quest or complete “Run, Goodsprings, Run,” but it is not essential for this plan to do so. It is adviseable however to pawn off any extra items you have and sell it in the Goodsprings General Store, such as items in VIctor’s Shack and Doc Mitchell’s house in which all items are unowned. 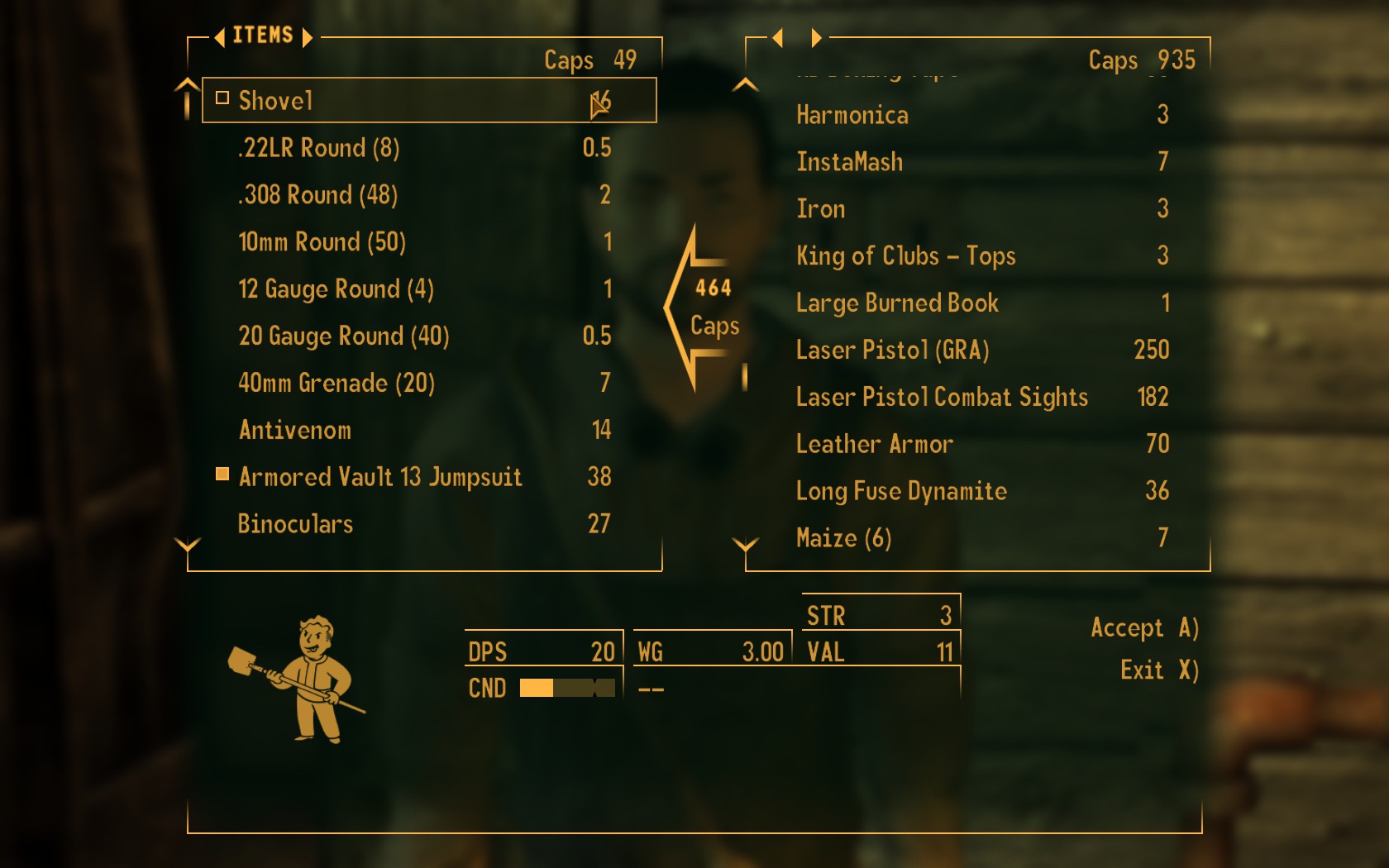 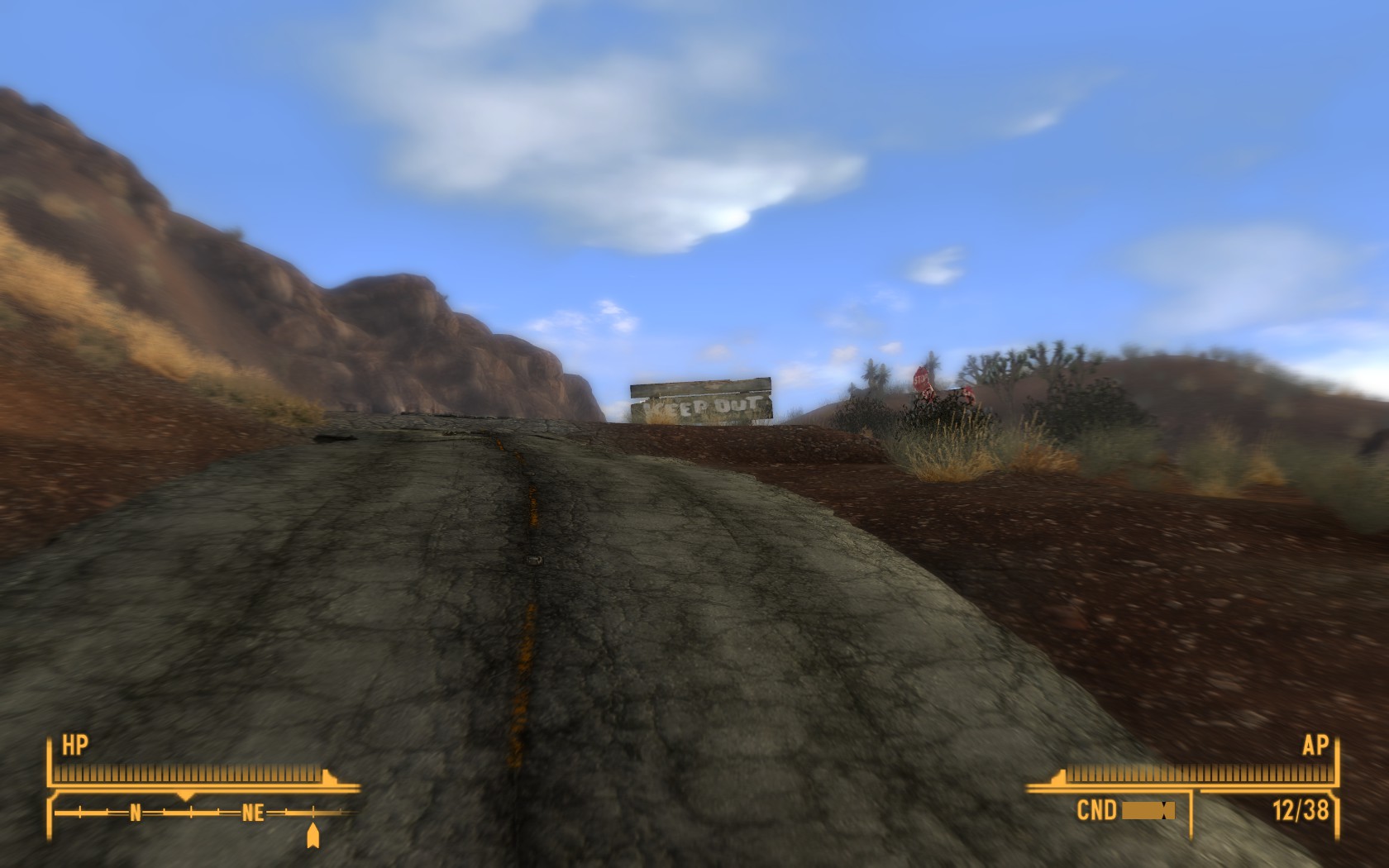 Reaching this point results in the menu popping up asking if you’d like to either travel onward, edit your attributes, or change your character’s appearance. You may do so at this point and change your skills to whatever is desired as you will no longer need the lockpick skill of 25 for the safe, the explosive skill of 25 for Easy Pete or the speech skill of 25 for Trudy’s speech check for the “Ghost Town Gunfight” quest. 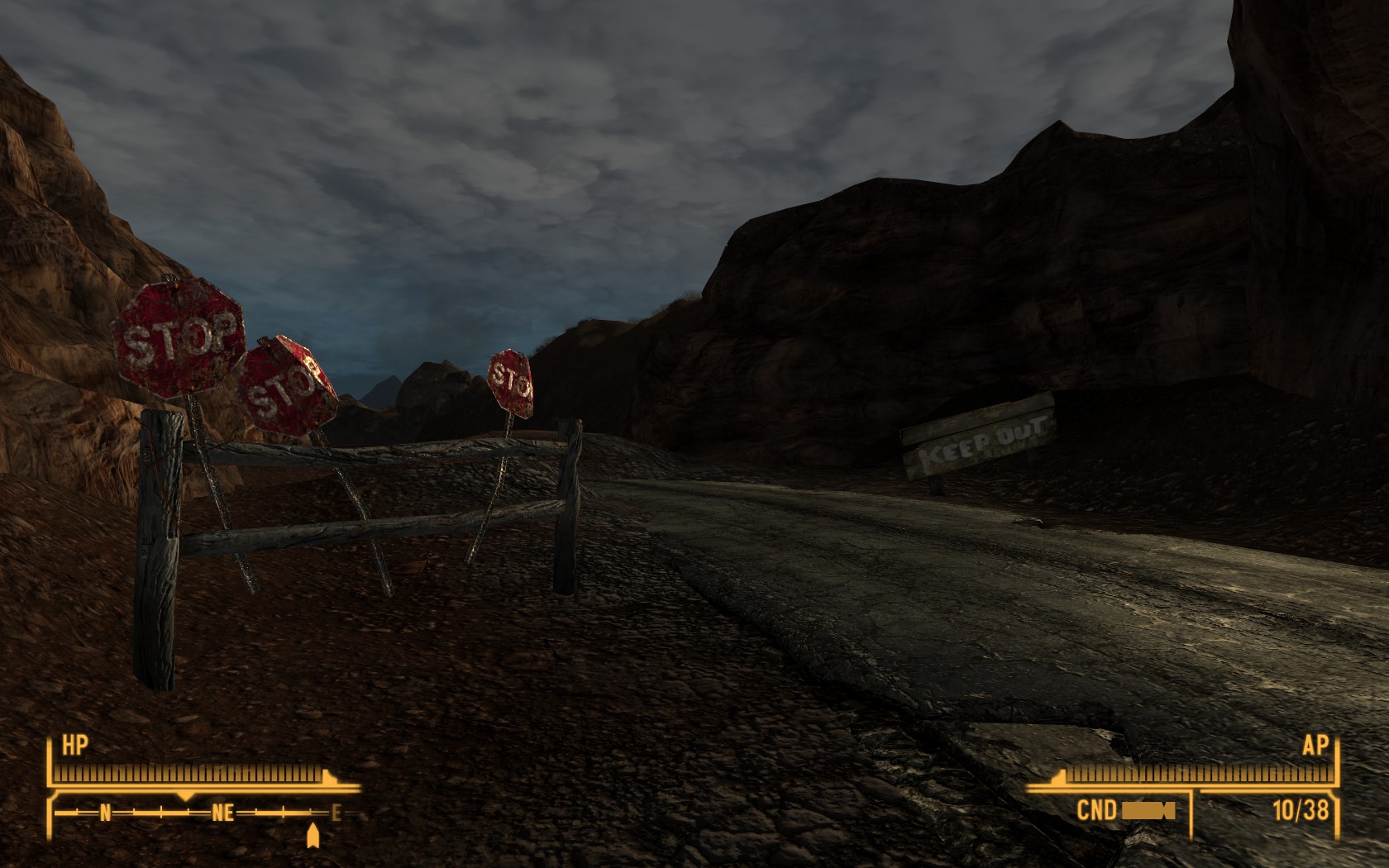 At this point you will want to turn left before venturing down further on the road where highly dangerous Cazadores are, and instead turn left and climb up the ridge to the side of the road. 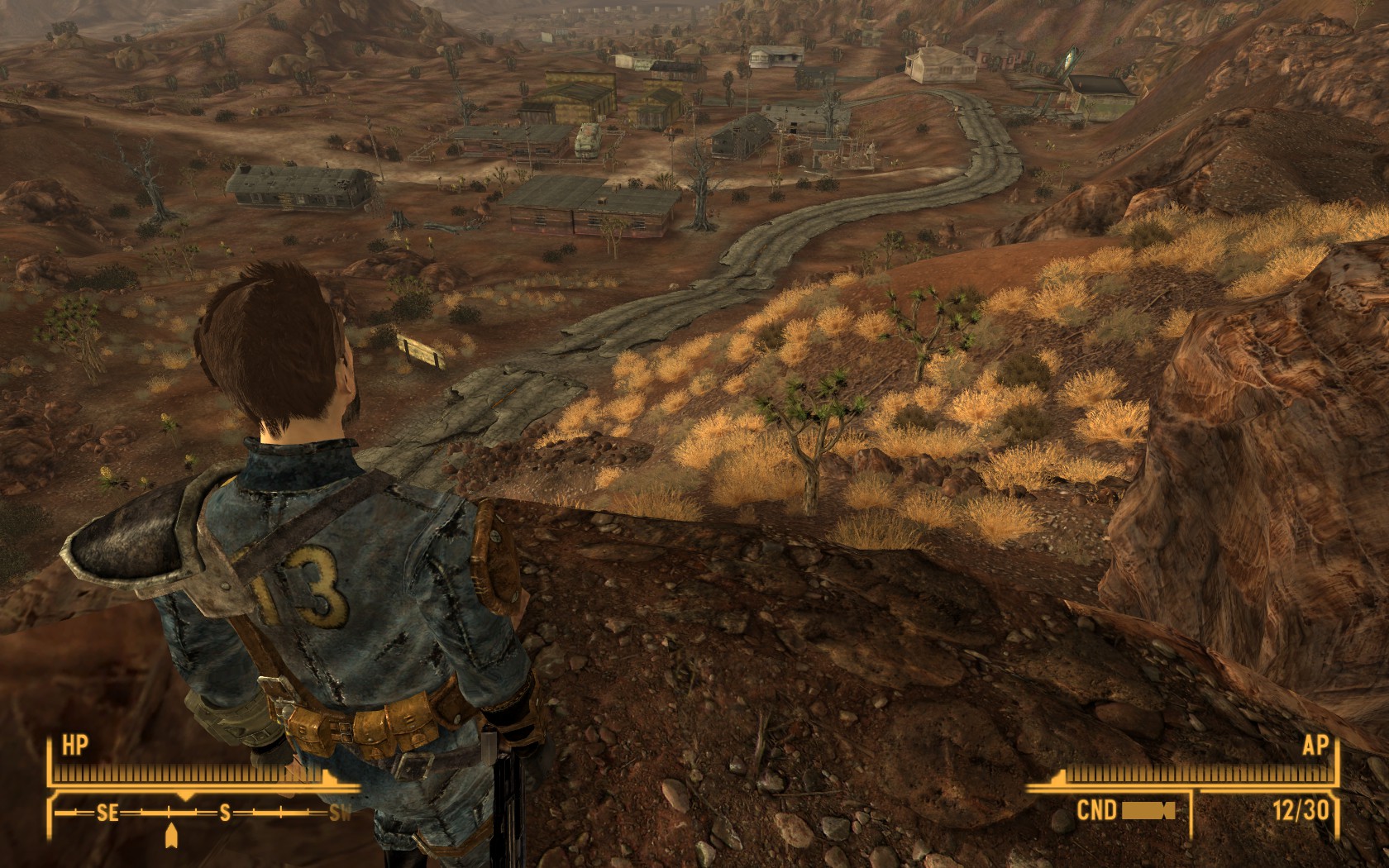 Sneaking Past the Tribal Village

Following the ridge and staying far from the road, you will eventually reach a cliff. Below it lies what once was the Tribal Village which has been since occupied with Cazadores. 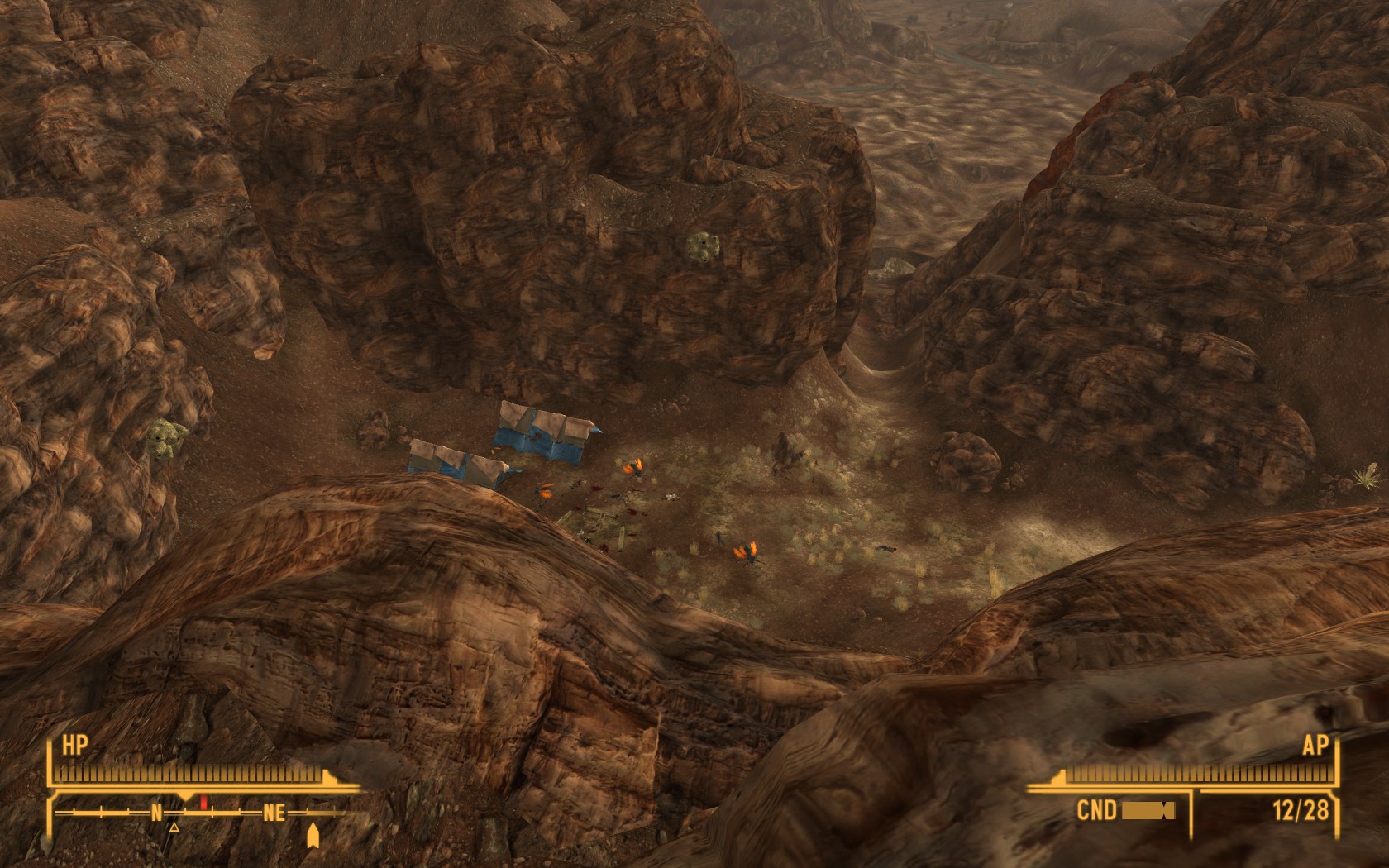 Staying hidden, you will want to activate your Stealth Boy. 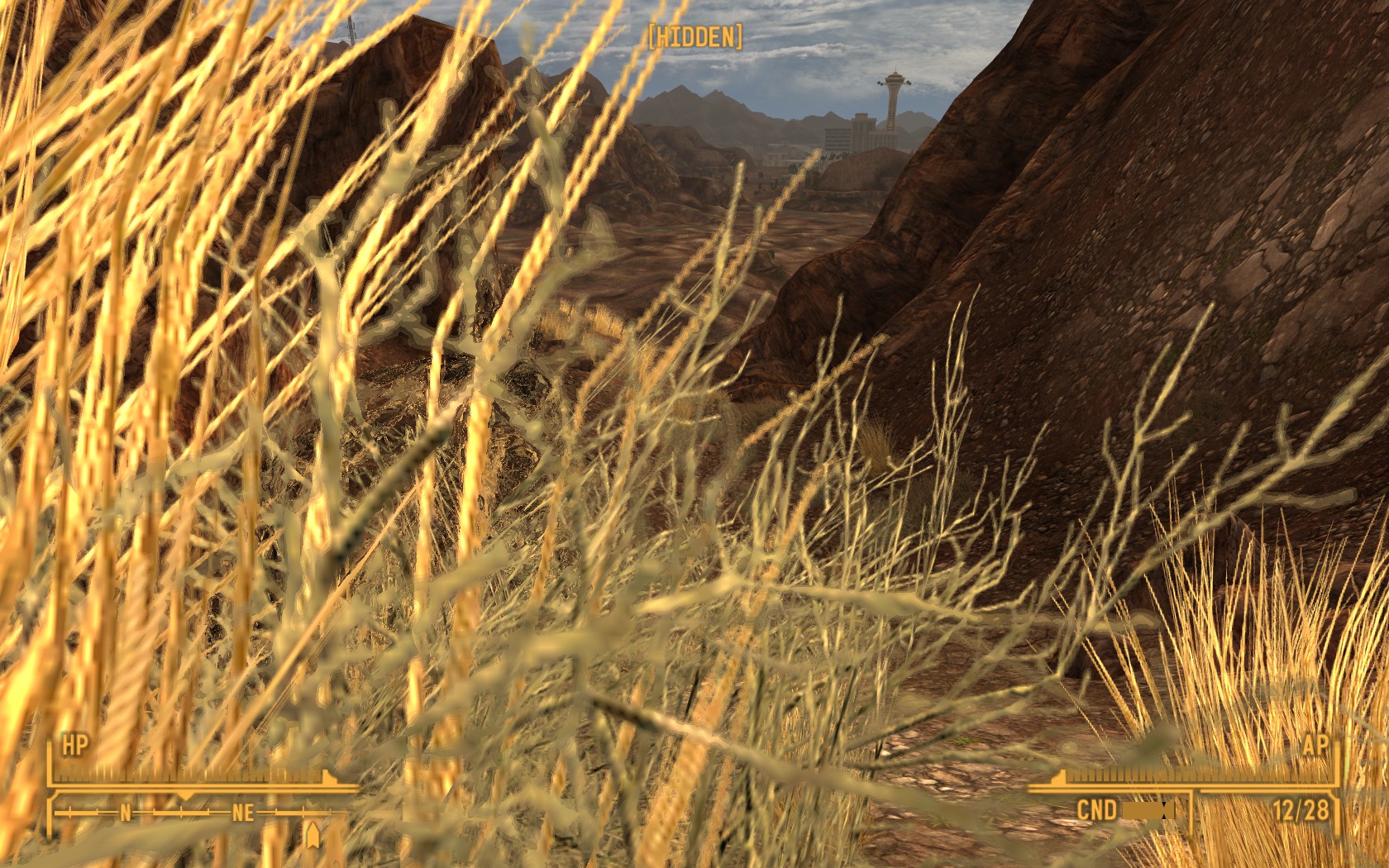 Now, carefully scaling the cliffside, you must keep a sizable distance whilst sneaking past the horde of Cazadores. You will likely not be spotted unless you enter the vicinity of the camp. Once you have finished scaling the cliff, sneak through the small valley which is unoccupied by any Cazadores, and continue sneaking until you are a sizeable distance from the entirety of the tribal camp. Note that this will not result in unlocking the camp on your Pip-Boy for fast travel, because in order to do so you will need to come close to the camp. 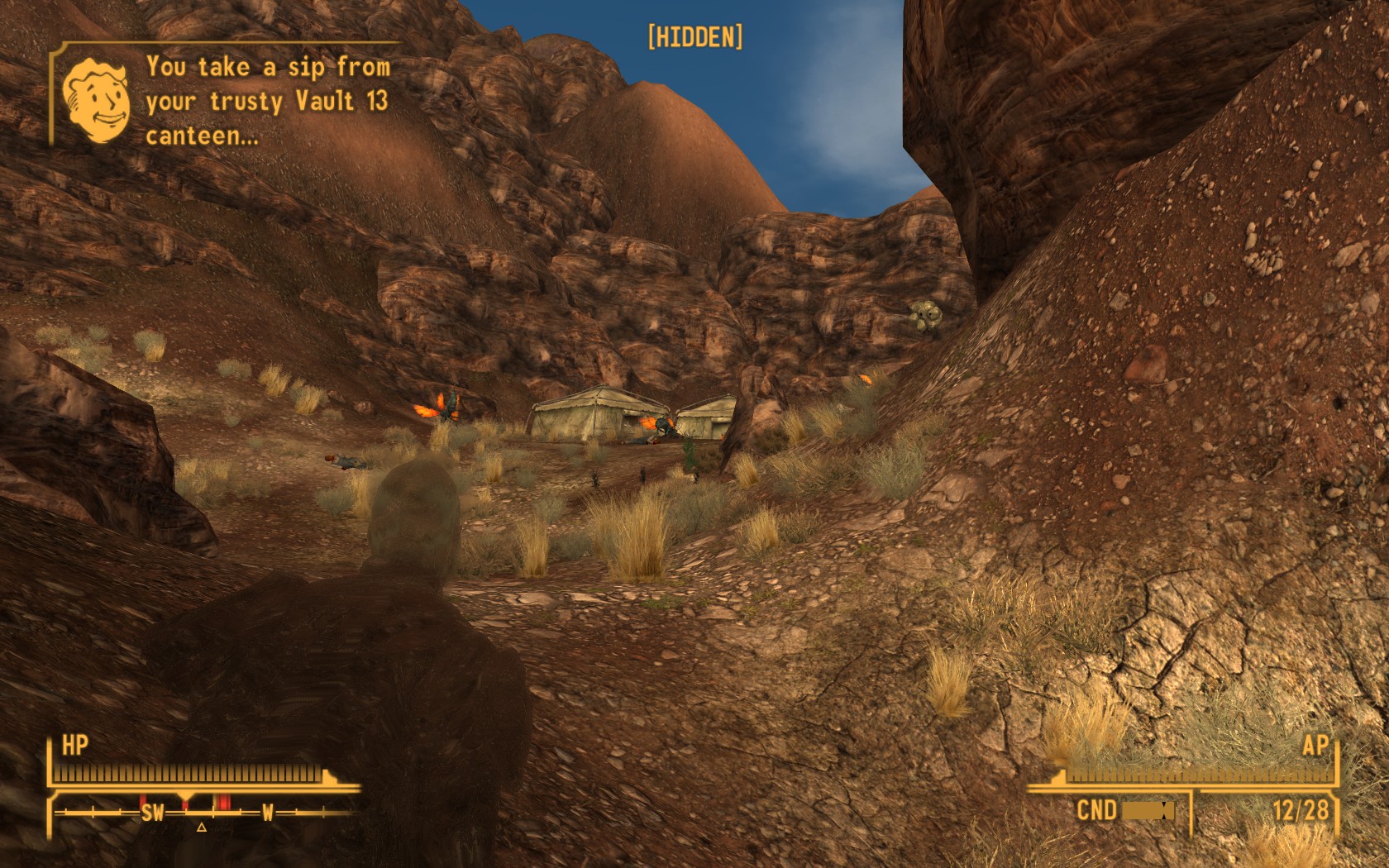 Once you reach the other side of the valley, you will see Red Rock Canyon in the distance to your right, and more immediately see the lake and destroyed house which is the Spring Mt. Ranch State Park. 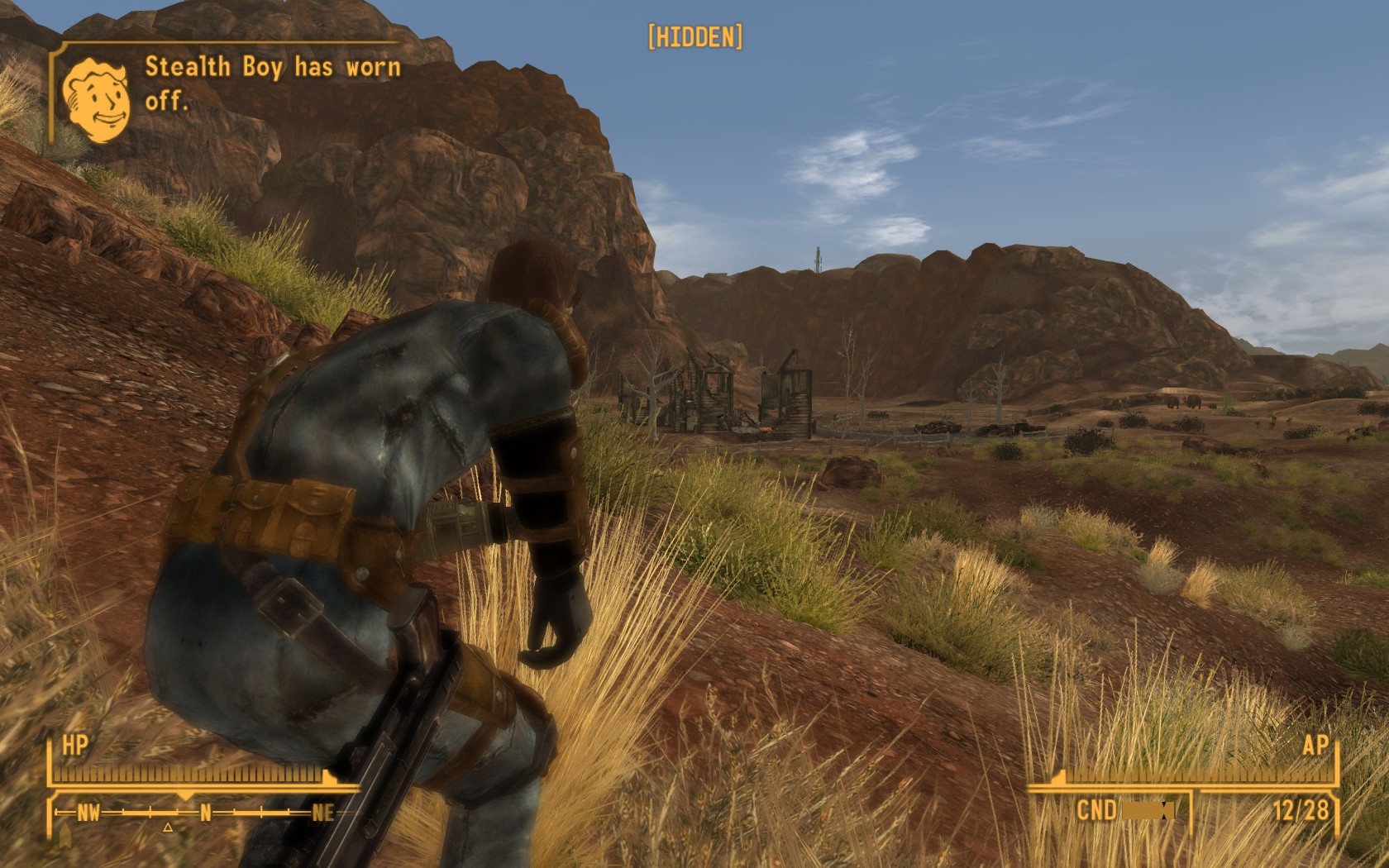 It is advisable to discover both these locations, as the Great Khans are essential to the storyline. 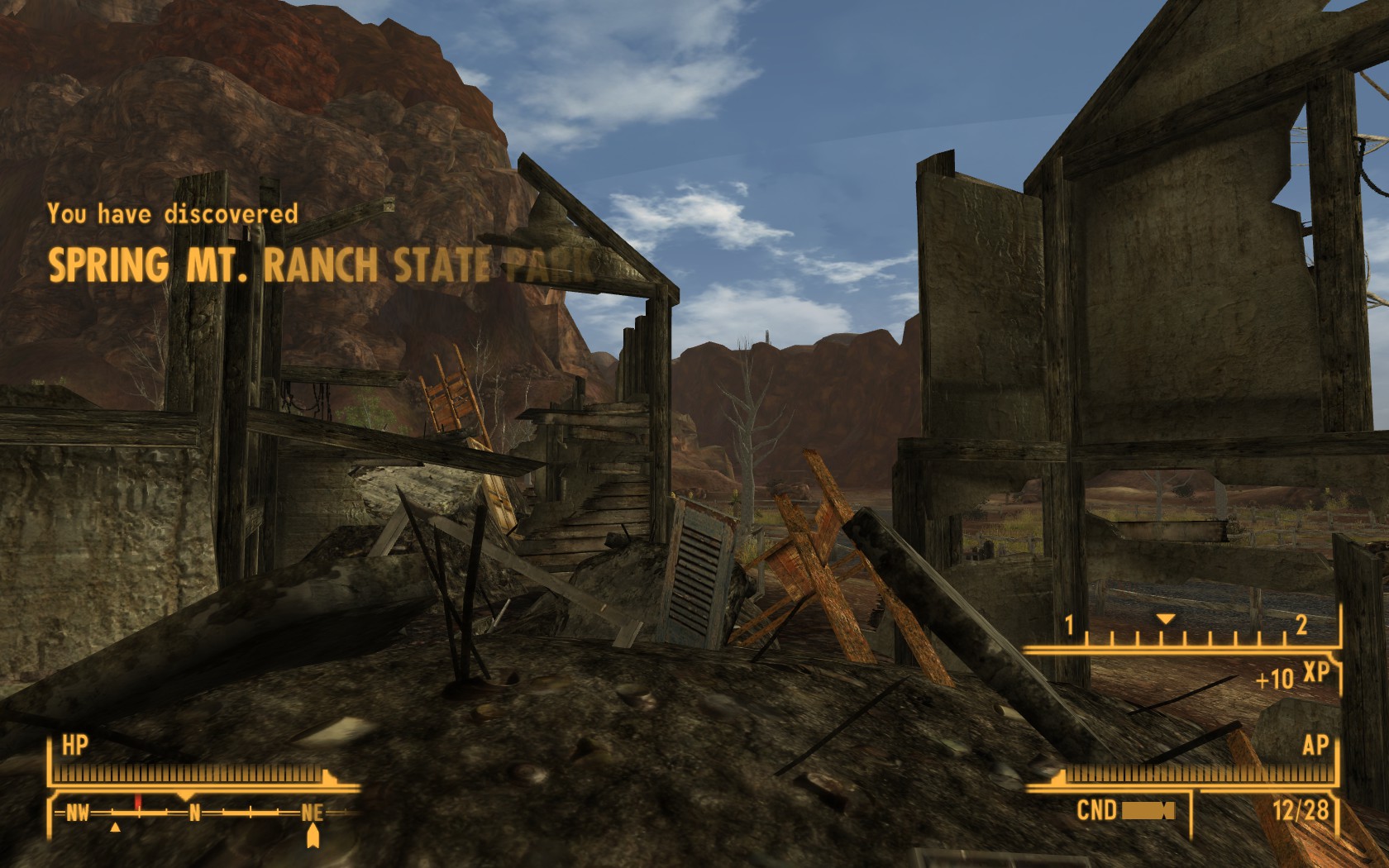 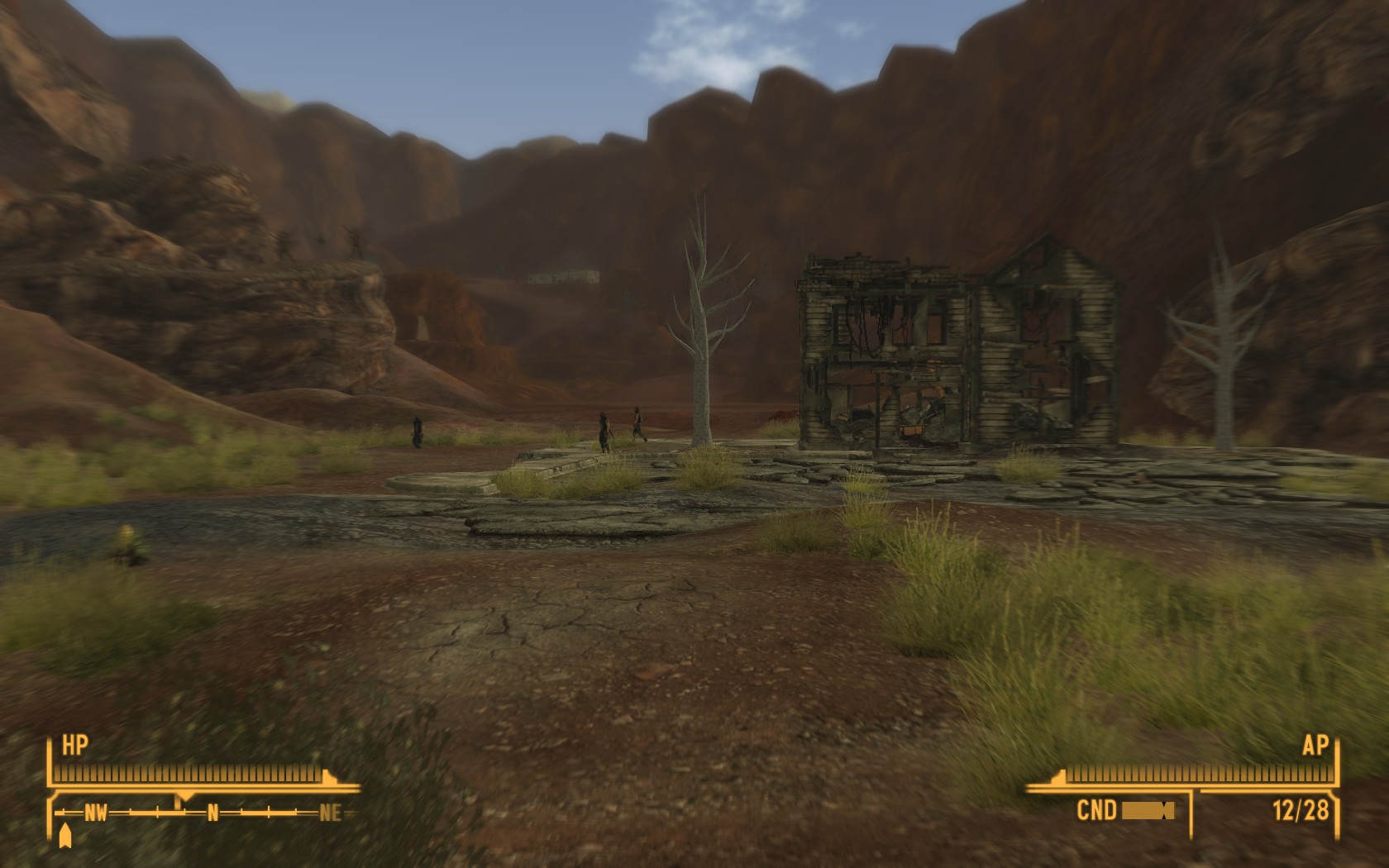 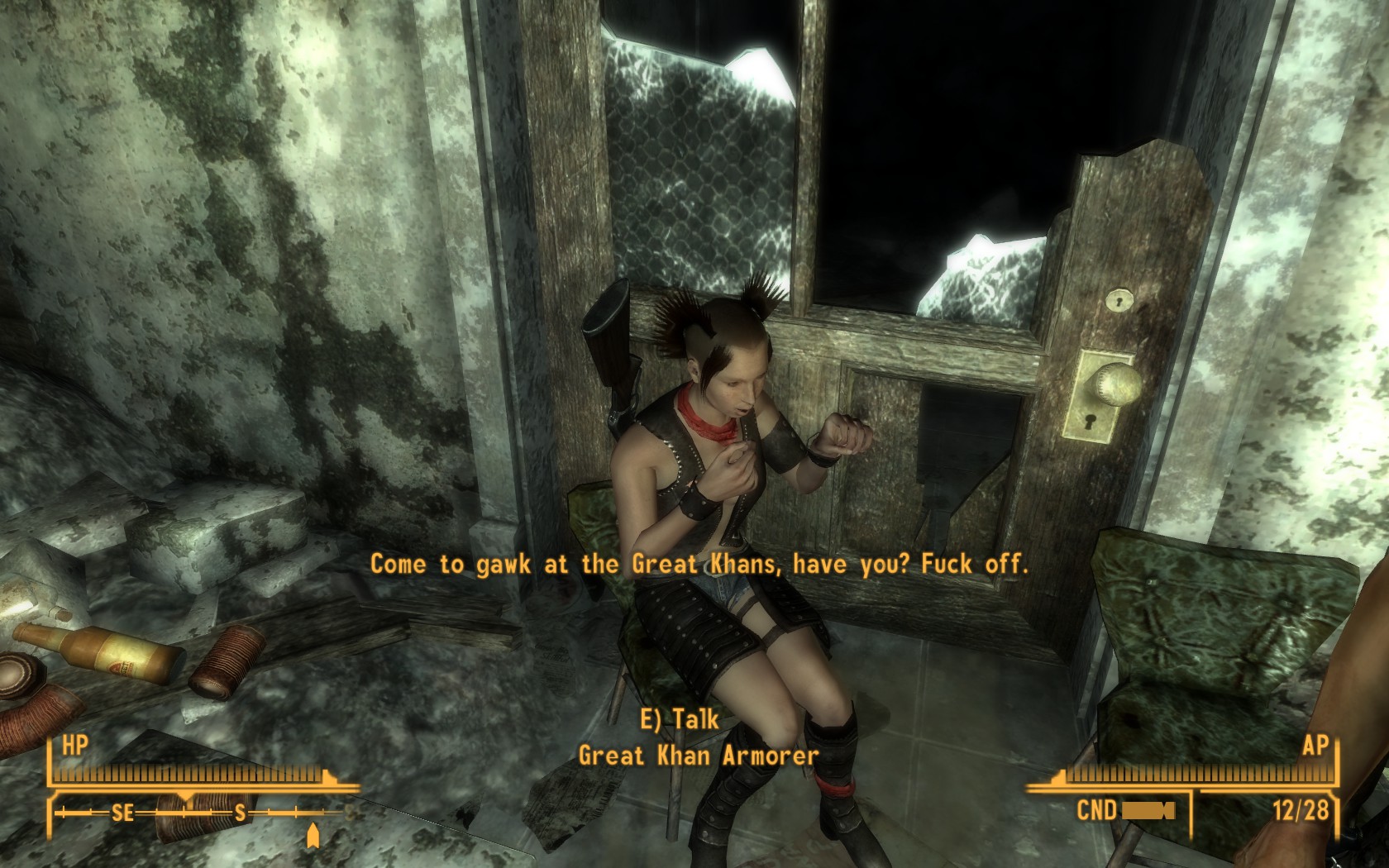 It is also worth noting that the park will contain some minor enemies, such as giant mantises and also contain a large stock of Birhorners. If you are playing hardcore mode the Bighorners will make for a great source of food. 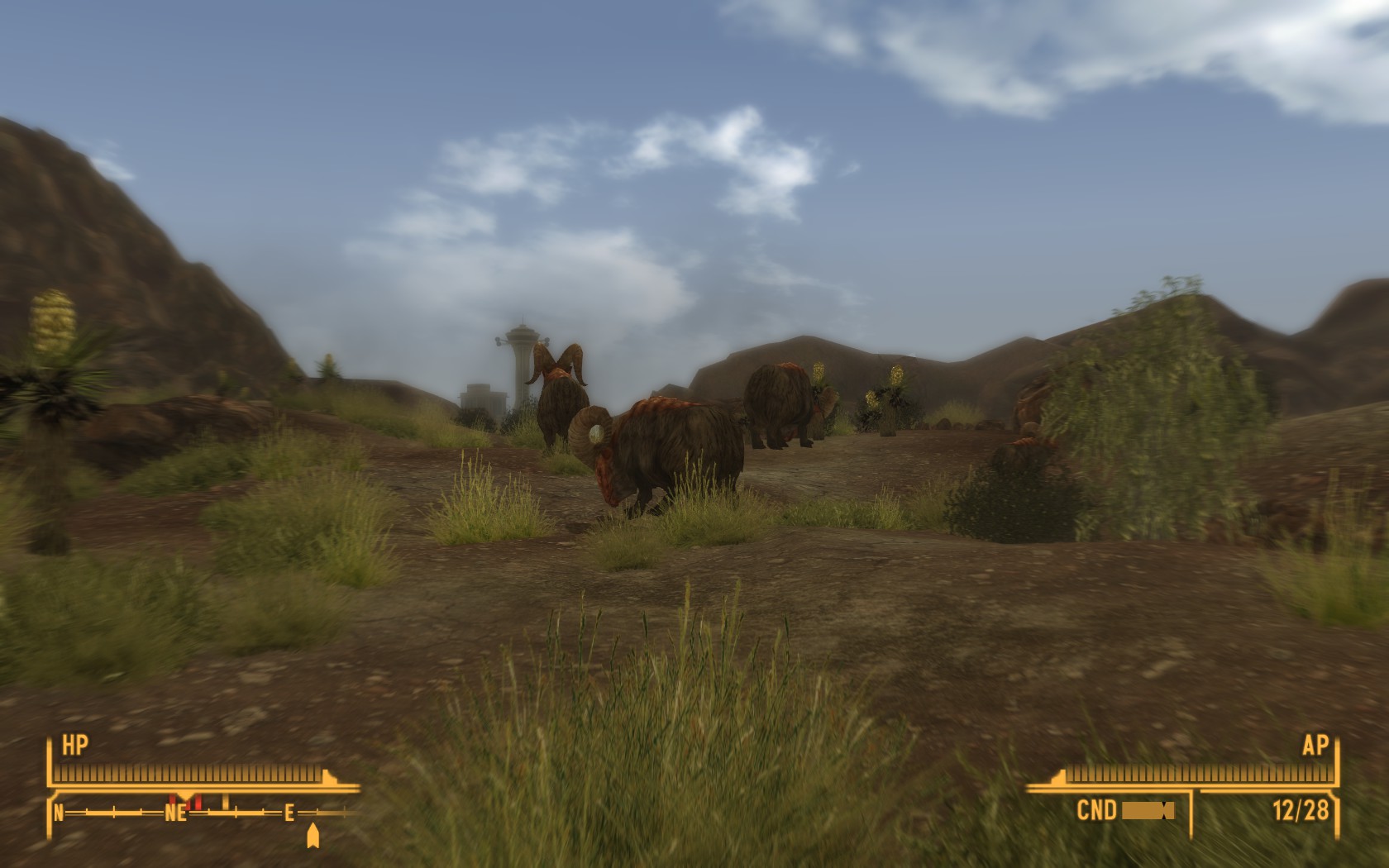 Getting Through South Vegas

Once you reach Red Rock Canyon, you will begin to head east. Upon doing so, you will come to the branching road. Going either way will result in high level enemies such as Vipers, Deathclaws, and Cazadores near Bonnie Springs. The best option at this point is to venture through the hills going straight. 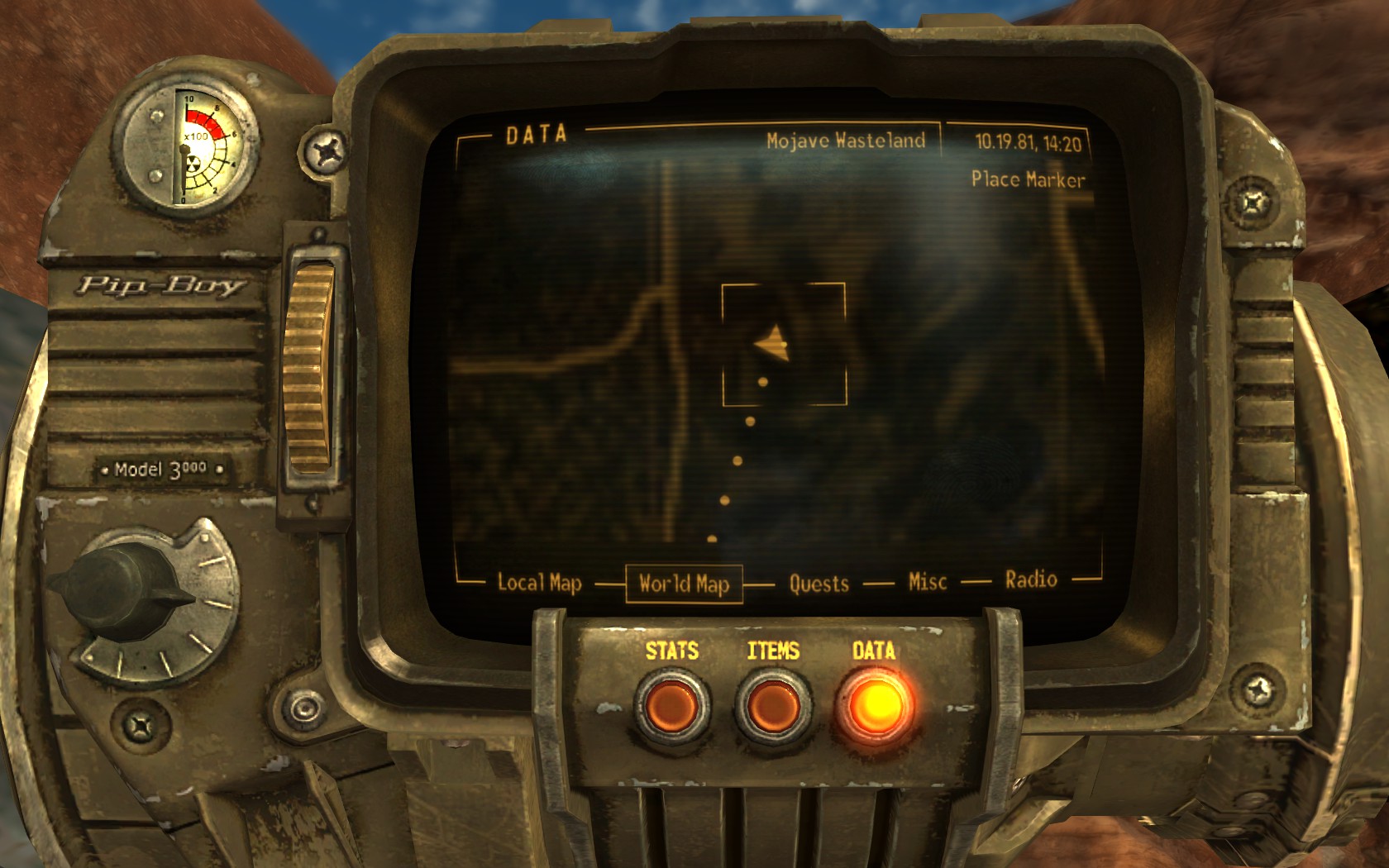 Below: A view of the pass, just northeast of Bonnie Springs. 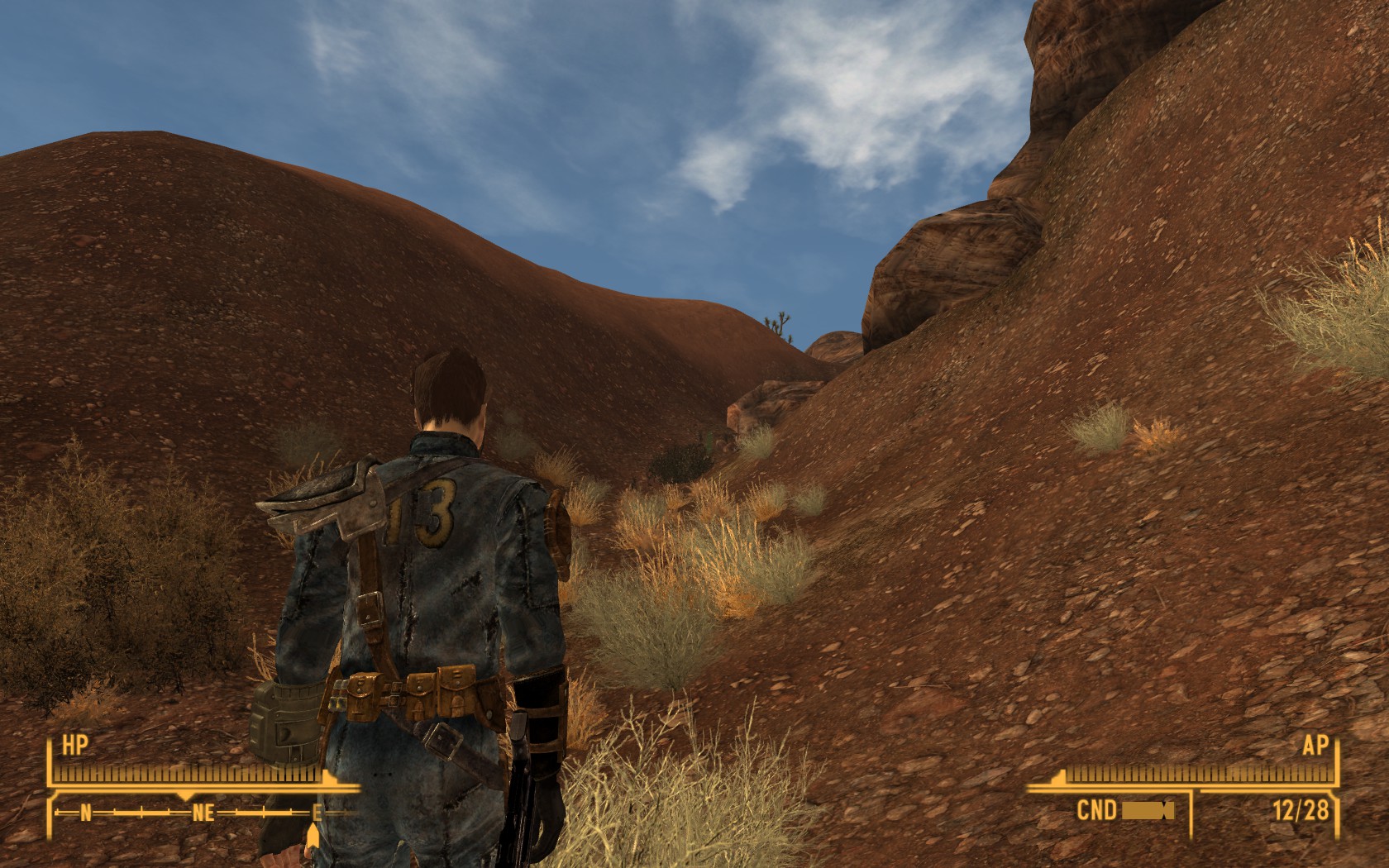 The only significant threat will be a small band of Fire Geckos which can easily be cleared out. 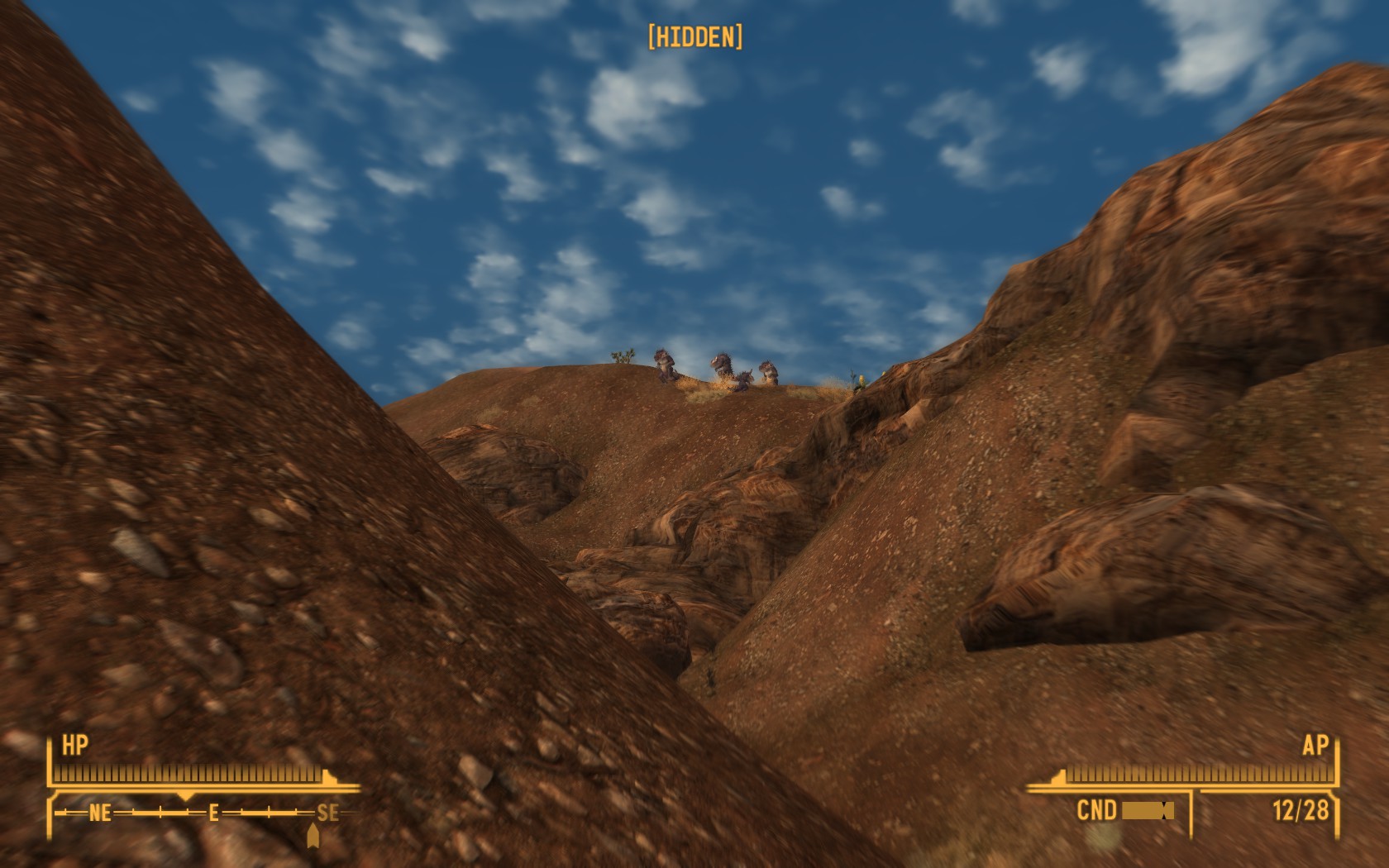 Continuing on the path, you will see the view of South Vegas. On the left are Fiend leader encampments such as Violet and Cook-Cook, and to the right can be seen Camp McCarran. 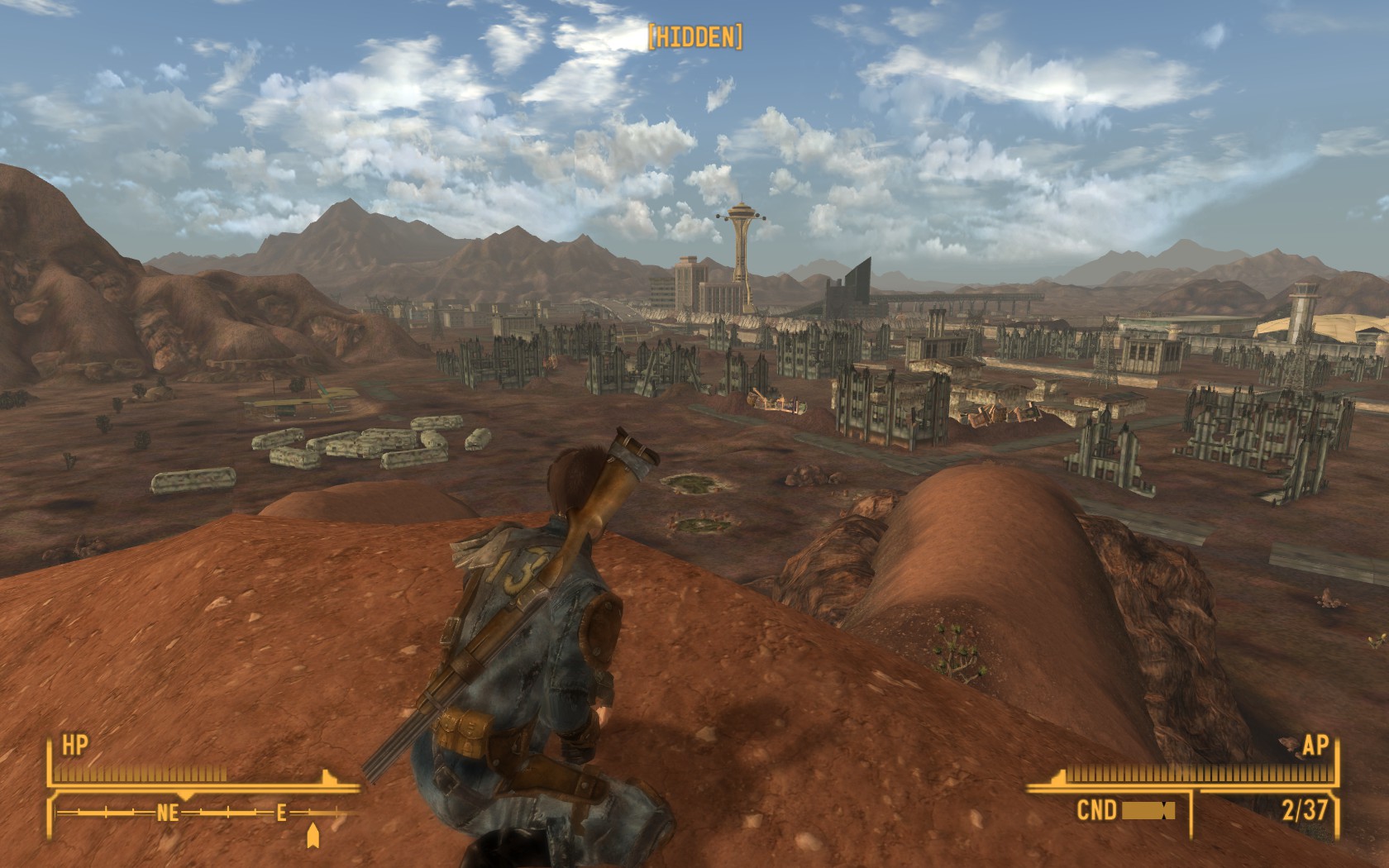 An overview of the remaining route: 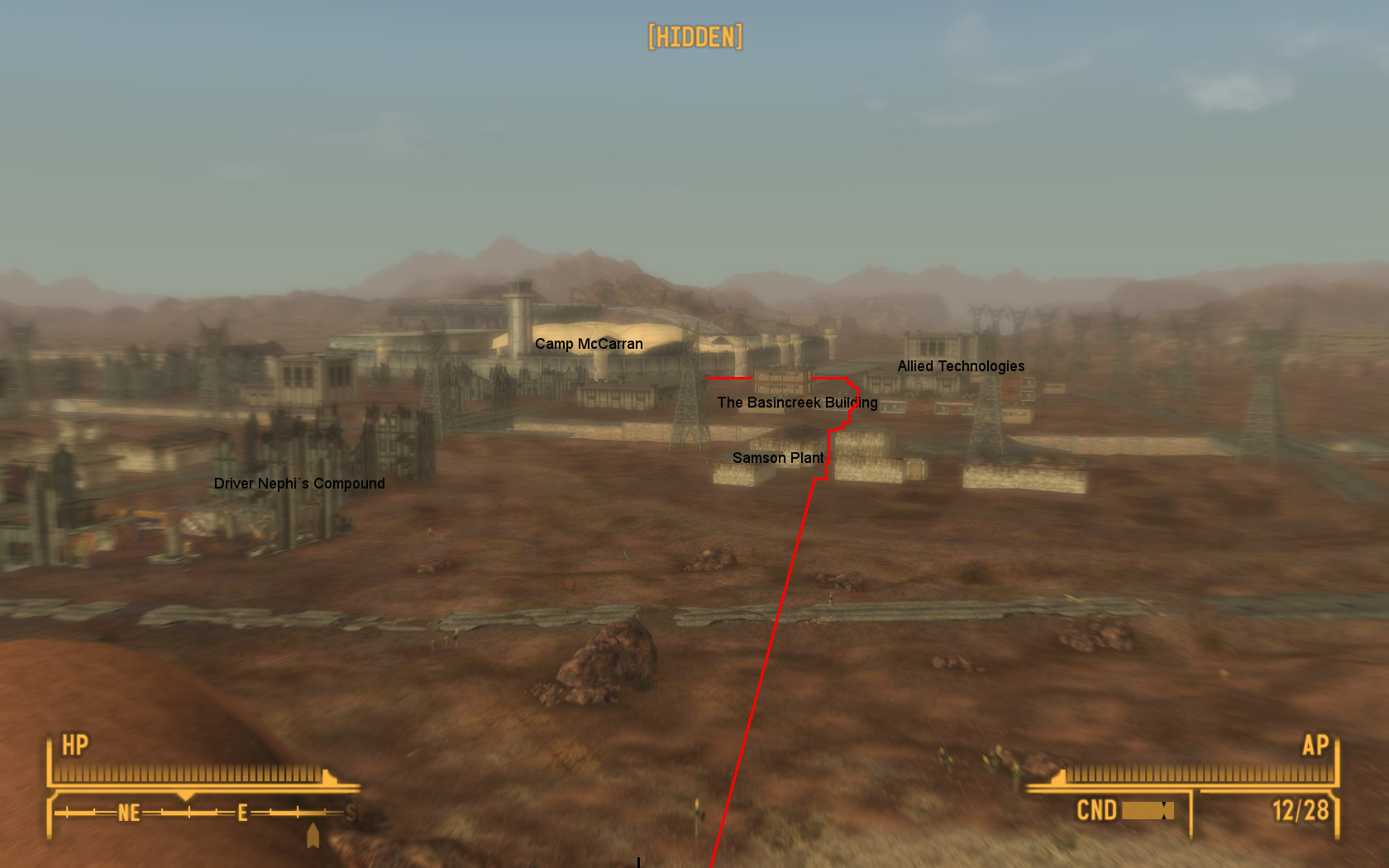 Scaling the hill overlooking South Vegas, you will now need to sneak through Fiend Territory, or run through instead, but choosing to fight through will be very difficult at such a low level. 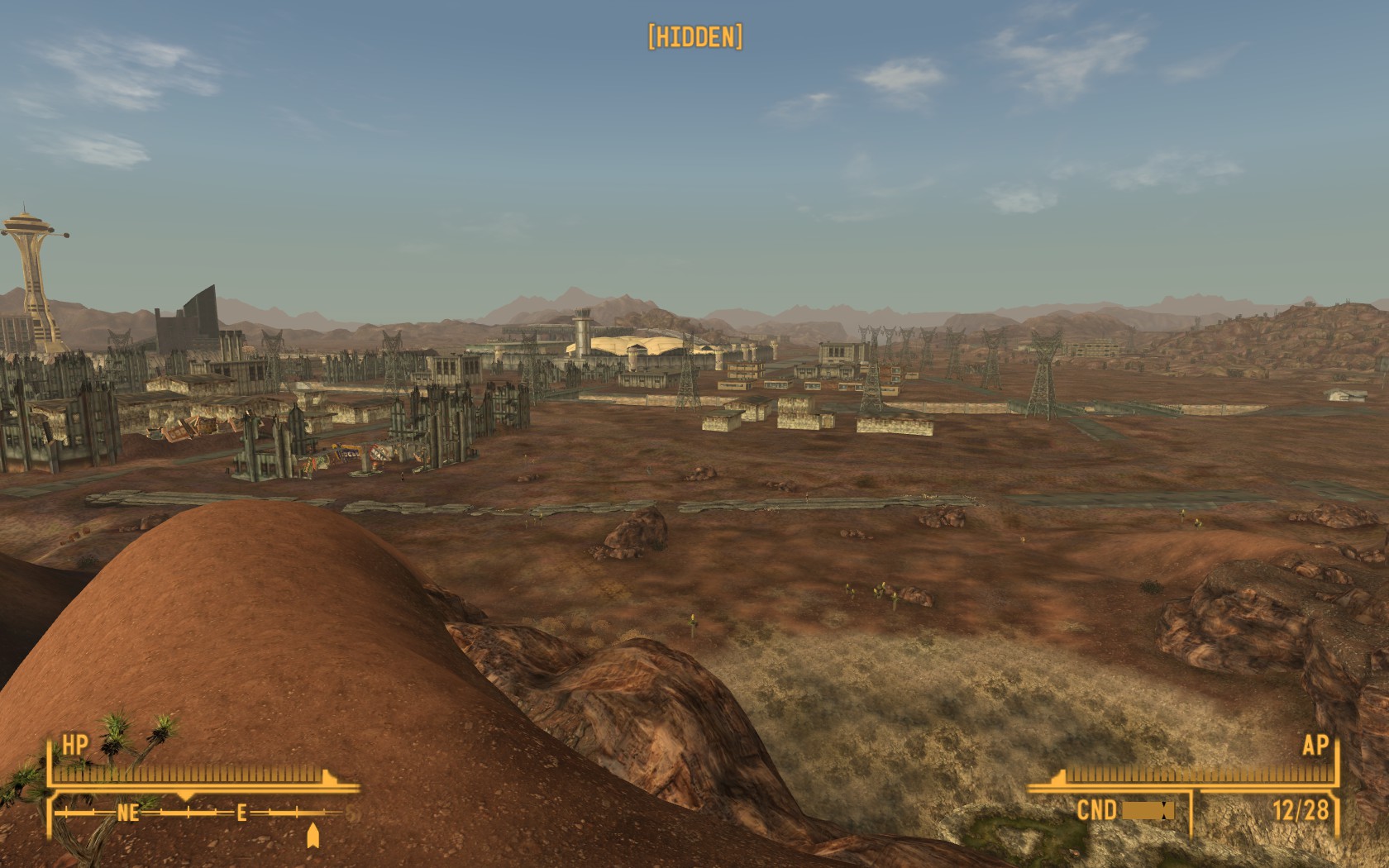 Once you reach the Samson Rock Crushing Plant, you must sneak further to the Basincreek Building. 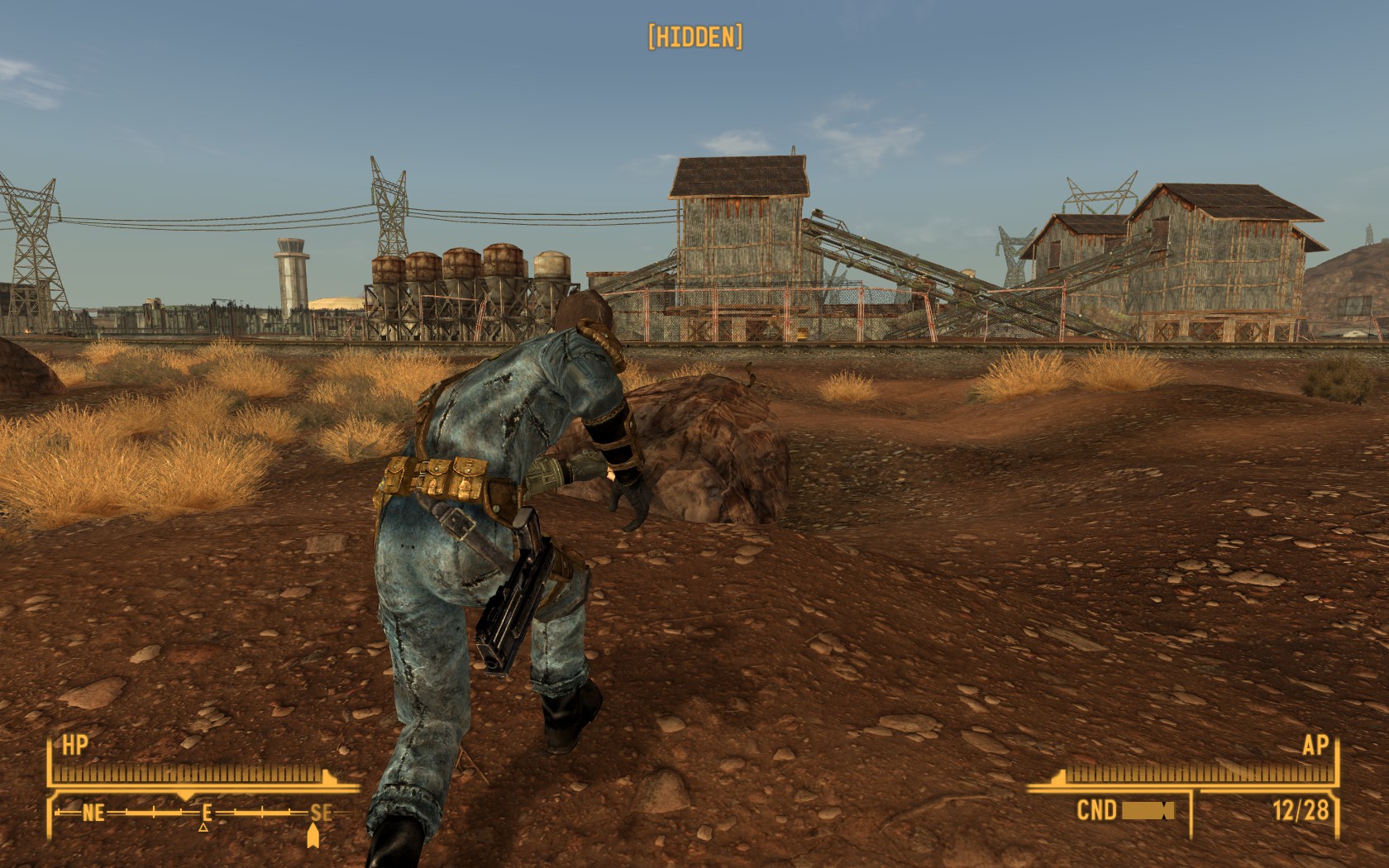 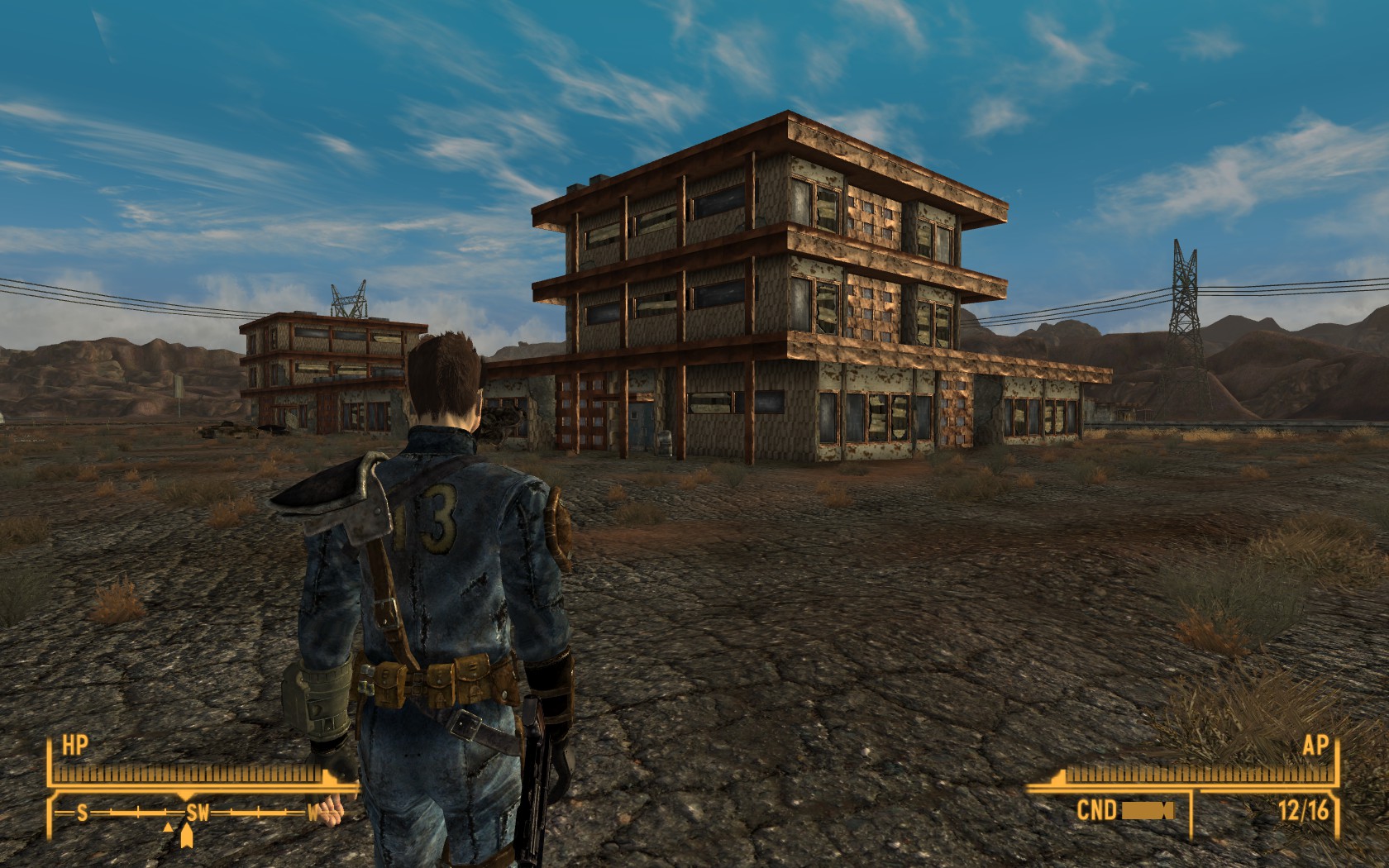 From here you will make a run for Camp McCarran’s front gate and the El Rey Motel. Keep in mind that the area is a warzone. 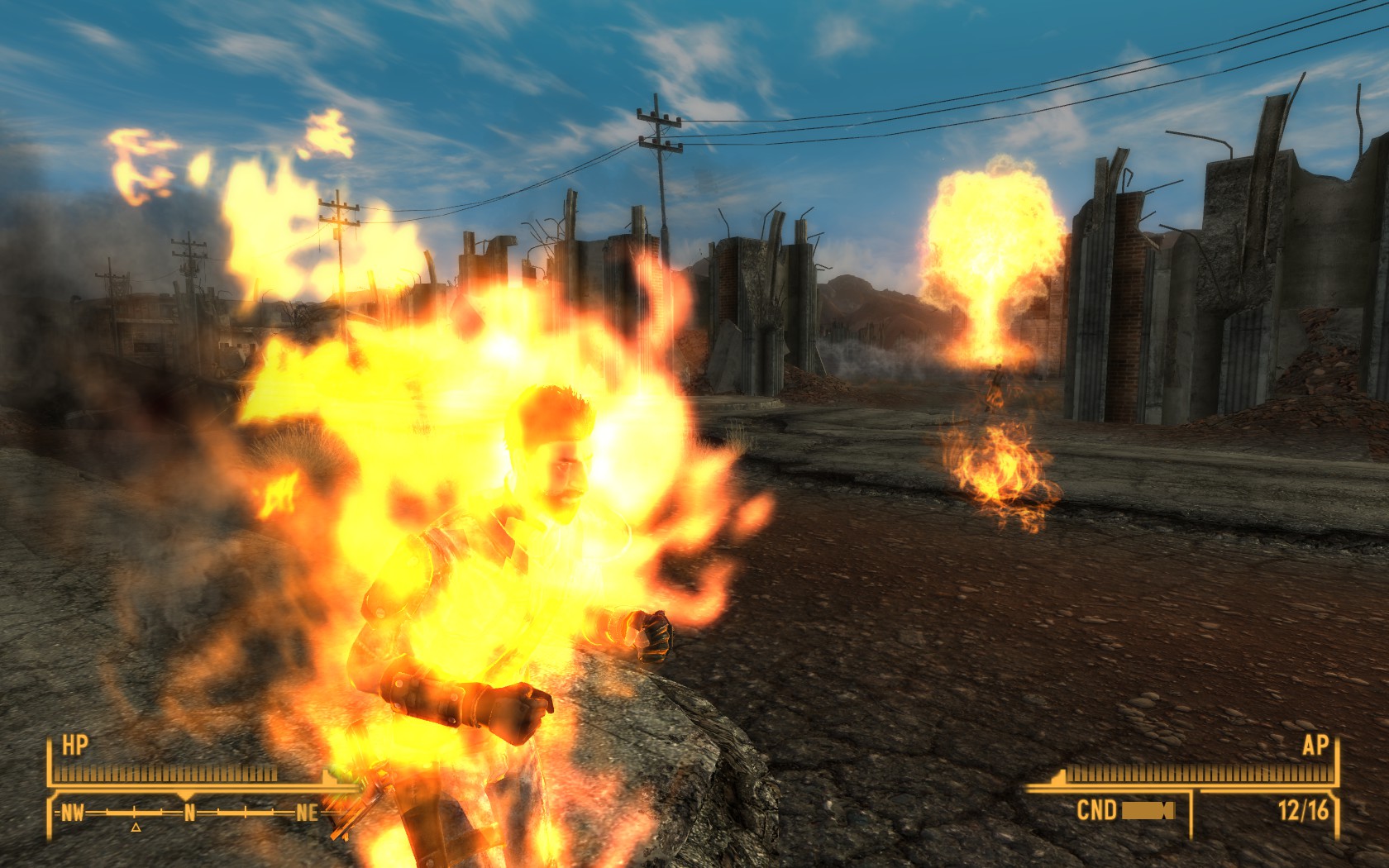 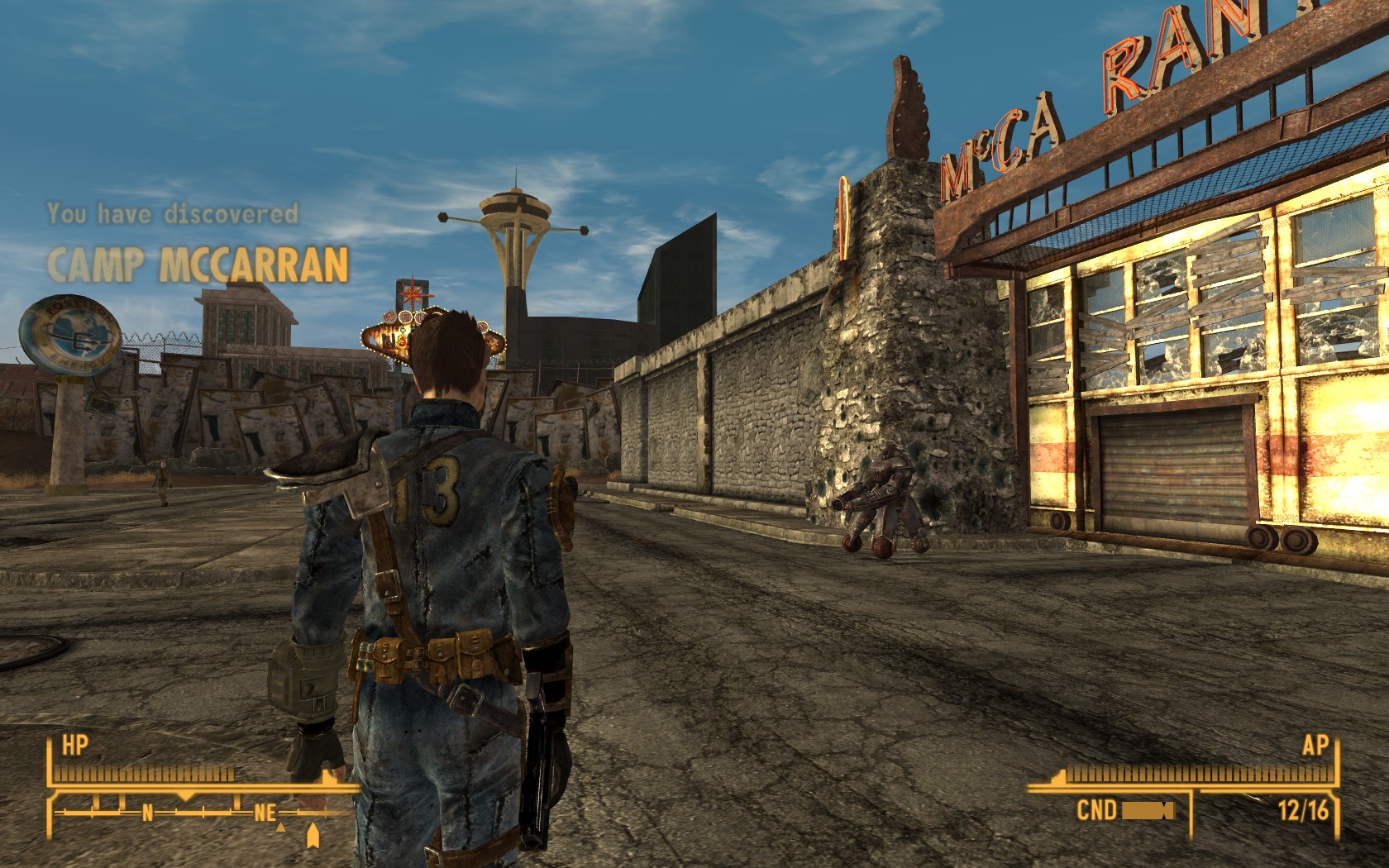 Now that you have reached Camp McCarran, the divergence of this guide’s path from that of the normal gameplay route is over.
You will encounter many enemies at a lower level now, bringing a new challenge to the game and will result in a much different gameplay. Enjoy!