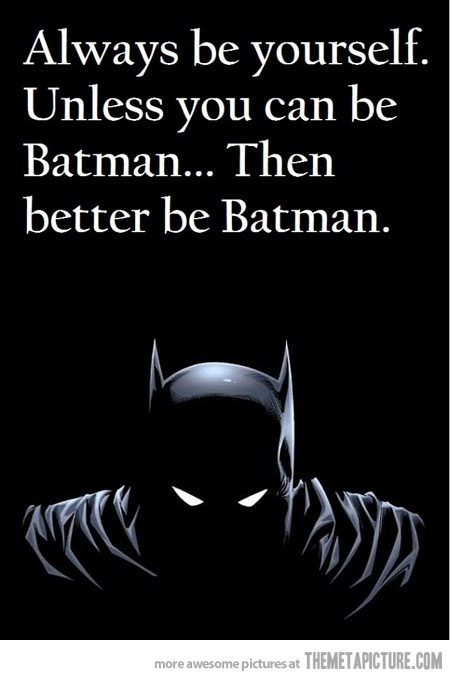 Basically there a lot of people who AREN’T the Batman. Now that is not ok. So that is why I have made this guide, so we can all become The Batman. Because you should always be yourself….unless you can be Batman….ALWAYS be Batman. [Spoilers for Arkham City inside]

Step one to becoming Batman.

Now, there are many steps you must follow to become the Batman. Now some people think that you must lose your parents, well that is not true at all. As long as you are mainly raised by your British butler, than you are on your way to becoming Batman!

Step two is also simple, because it doesn’t actually involve much work. Brood. Only wear dark clothing. This will make people think you are a freak and some will fear you. Much like Batman!

This is also a fairly simple task, get an IQ so high its unbelievable. So whilst your brooding, you better have your wanna-be-Batman face deep in an advanced science and mathematics textbook. You must know everything. However, even with your high IQ you will still fail to make the right choices…..LIKE AT THE END OF ARKHAM CITY WHEN BATMAN IS GONNA LET HUNDREDS OF PEOPLE DIE, JUST SO HE CAN ATTEMPT TO SAVE ONE GIRL, WHO IS ULTIMATELY JUST GONNA DIE CAUSE SHE IS BEING HELD BY THE JOKER! I MEAN COME ON! YOU KNOW JOKER HAS SOMETHING UP HIS SLEEVE! Thank God for Alfred….

This one is SLIGHTLY more challenging. You must acquire an immense amount of money. So much its infinite. Like take Bill Gates, and times that by 10. THAT much. Nobody cares how you do it. Rob Bill Gates, use that money to invenst in printers, and just photo copy money. Works every time.

Now that ur incredibly wealthy, there is something you must do with that money. That something, is use it to develop technology that shouldn’t work in real life, but for some reason your supposed to believe it does. Also buy a utility belt, this is Batman’s get of jail free card. No matter what situation he’s got something in that belt. Need to sneak past a ton of guards? Sure, smoke bombs! Want something more accurate than a batarang? Sure, REMOTE CONTROLLED batarang! Need to somehow freeze water blocking your path, and hurtful air coming from vents? Got a freeze bomb for that too! Wanna pour yourself a bowl of cereal but realize there’s no milk? Don’t worry, Batman has those little milk packets you get a Diners!

Make it known to the world that you will have a hard time winning fights unless you prepare. This way, no matter who you are fighting, your Fanboys will believe you are victorious if you prep. You VS Zeus? You if you prep. You VS Doomsday? You with some prep. You VS Yourself? Depends which of you get preptime. They don’t even need a valid item you could prep with to defeat the villain. They just need the phrase “Batman wins if he has Preptime.”

Develop a catchphrase. Something catchy, or that says who you are, but something people will remember. Some great catch phrases include “I’ll be back”-Teriminator “My spider sense is tingling” -Spiderman “Where’s Doug?”-Everyone from every Hangover movie ever “Luke! I am your father!”-Darth Vader. These are good but FAR too complicated. You’ll need something very catchy, that days of work was put into….something like…..”I’m Batman!” YES! BRILLIANT! Man, by this logic Mario’s catchphrase is brilliant too! (It’s A-Me Mario!)

This step is VERY important. If you have any villains, who are girls, and are not in a relationship, you must date them, or be romantically involved with them in some way. Batman has done this a good couple times.

This one is two parter. You must learn and master EVERY SINGLE MARTIAL ART KNOWN TO MAN…..and several known only to dolphins. The second part to this, is find a sidekick who is almost as well trained as you even though they have done nowhere near your level of training. Such as an acrobat in the circus. Give them a name that relates to yours, but is nowhere as cool.

The final and most important step to being Batman….FIGHT FOR JUSTICE!!!! and incorporate the phrases “I’m batman” or “because im batman!” into every sentence. Follow my tips, and you will be Batman in no time!!!!

CONCLUSION/Credits
Thanks to Smitty The Kitty for inspiring me to create this guide.
Thanks to Batman for being Batman.
Also check out my Steam group the Snapping Turtles
–Leave comments about what guide I should do next!!
(I know it seems I am making fun of Batman, despite this I am a huge Batman fan and don’t mean to offend any big Batman fans.)
Leave a rating if you enjoyed!