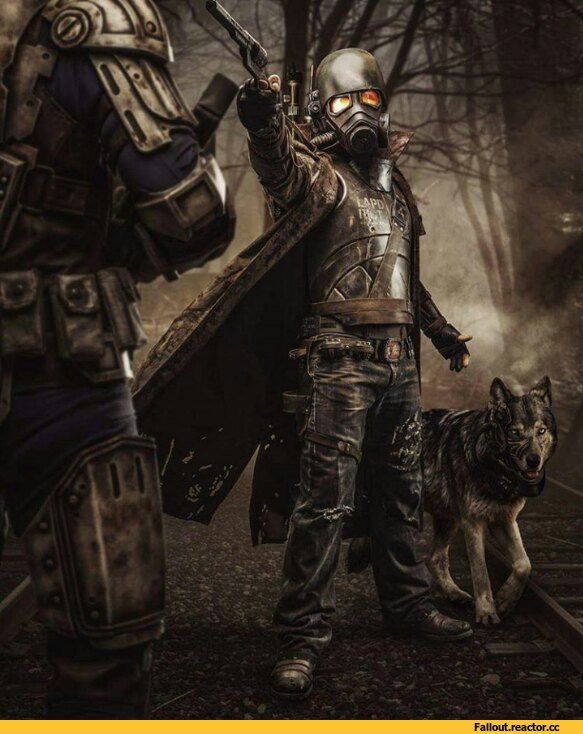 1) Your outfit and looks.

Alright, how your courier looks is up to you but if you want to be the badass kind courier you need to say “f-word off” to true armor, wear something formal that is gang-like. I personally like a Omerta suit or a formal suit but a king suit works too.
Dont use any bad-looking armor with good defenses if its not stylish.
Basically, no cool = no good.

The reason for this is that a kind badass courier will always give the less painful, merciful death. 9mm pistols or 45 pistols dont hurt much, also if you got a powerful weapon that will kill them in only a shot make sure to use that cause we dont want our poor enemies to suffer, they deserve better.

3) If your enemy is a monster and has done terrible stuff, dont hesitate to kill him and show no mercy.

Poor thugs and fiends deserve better and should have a quick and painless death but you know which people dont? THE LEGION, we hate monsters like them so dont hesitate giving them a painful death cause you may be kind but you are still badass.

4) Join no factions, aim for an independent vegas.

An independent vegas will help enemies that dont deserve their sad life have a slightly better life and people who are good have an even better life and that is the most kind thing ever. Do not hesitate killing NCR cause even if they “aim for being good” they are corrupted. Dont hesitate killing Mr House, but give him a merciful death. Dont hesitate AT ALL killing legion, they are monsters.

When you first meet him at the tops, make sure to pass his speech check so he can go with you to the suite and doesnt outsmart you after that make sure to forgive him and let him go, get out of the tops and begin Render Unto Caesar then sabotage Mr House and blah blah blah. Give a stealth boy to Benny and massacre Ceasar and all his legion boys.

6) If done a mistake that you regret, dont hesitate but do the following.

If that mistake was killing an npc, then dont try to load a save and anything but make a small place for him and move his corpse there to make sure he rests well and pay him a visit each a real life day or two. If that mistake was doing something you didnt want to do on a quest like helping the legion kill a poor town then kill legion. If it has nothing to do with that do whatever you can to feel better, watch memes, do more quests, etc etc.

FROM NOW ON, VANILLA GAME GUIDE HAS ENDED. THE FOLLOWING IS HONEST HEARTS ONLY, DO NOT READ IF YOU DONT HAVE THE DLC.

Alright, if you are now reading this i guess you have the DLC, good. Move onto the next section.
If you dont have the DLC, then read the goodbye message here:
It has been a really nice adventure to teach you how to be a good but badass person, a cool guy who you will always want as your friend. I hope you follow my example and become the best badass, kind courier.
– The courier, MrNoOne.

Ill be honest, at the start there are a lot of rude options, DONT TAKE ANY. Just dont, be nice to people okay? People like Daniel or Joshua could really use a friend.

Why not take friends along? Come on, it will be fun! A good and kind courier always accepts help.

Ill be frank about this (insert hi my name is Frank joke), C H O O S E T H E F L E E I N G F R O M Z I O N E N D I N G. I choosed Joshua´s ending and i had some serious regrets, considering how i only did what he wanted to do cause i wanted him to like me. In the next steps we are gonna separate stuff by the endings.

Alright, you made the right choice my friend. Both Joshua and Daniel are pretty ok if you choose this, Honest Hearts will end pretty boring but it is the most kind thing to do.

Oh no, why? Why did you pick this ending!?!? You have made a mistake, i chose this in the past and had severe deppresion for the past 3 days. Basically just spare Salt Upon Wounds then get heart broken for what happens to poor Daniel. He literally becomes heart broken and kinda depressed for the rest of his life, and betrayed by the sorrows… Sh!t dude thats deep…

Alright, you now want to cure your depression you got from seeing the sad Daniel ending. Fear not for i have the cure!
1) Ok cure, will help you for a while.
Watch memes about Fallout New Vegas.
2) Mostly decent cure, will make you sad but then you will feel happy for the most time.
Make your own headcanon about how Daniel regains his happiness.
3) EPIC CURE.
Literally just forget about it and move on, install a few mods and do stuff.
4) BEST CURE.
Forget about this sh!t ending where everyone is sad and violent, reload your past save and choose the Fleeing From Zion ending and everyone, including Daniel and Joshua will be happy.

It has been a really nice adventure to teach you how to be a good but badass person, a cool guy who you will always want as your friend. I hope you follow my example and become the best badass, kind courier.
– The courier, MrNoOne.