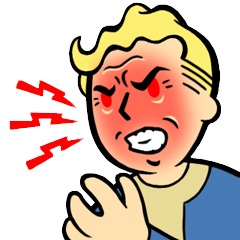 This is a guide for what is essentially the most basic way to make Fallout: New Vegas difficult. It’s a guide for how to beat the game in hardcore mode, on very hard combat difficulty, without dying once or reloading saves. This is my first guide, so apologies if it’s terrible!

We’ll start with character creation. It’s recommended by me to use a female character, but playing a male has another (lesser) benefit later on that I will describe. For SPECIAL, get 10 in Luck, Intelligence and Perception, put 7 into Endurance, and dump the rest.

Tag skills will be Sneak, Medicine and Speech. For Traits, Good Natured/Skilled and Wild Wasteland. Some of these can be interchanged for this run, but the main things you MUST have are wild wasteland, high luck, high intelligence, medicine and speech.

Early on, go to Doc Mitchell’s science station and make stimpaks. There are another two medicine boxes that can be looted for more possible stimpaks, as well. If you have the DLC packs, this should give you a TON of stimpaks early on. If you really want to go the extra mile, start the “Ghost Town Gunfight” quest and ask Doc M. for more stimpaks.

Keep in mind that in hardcore mode, stimpaks do not instantly heal you, rather healing you over a period of time. If you are getting shot at, use a stimpak almost every fight. Don’t be stingy; you have plenty and you’re way better safe than sorry. Medicine will increase the regen per second, but you probably won’t be putting points into it until later. This is a good starting point for any survivability-based pacifist-aiming character, but continue the guide if you want more details.

Getting to New Vegas

You may think playing it safe here would be the best option, but “playing it safe” may be more difficult than you expect. Following the “normal route”, as guided by the “They Went That-A-Way” quest, you can come across vipers. Vipers are A) hard to spot beforehand, B) hard to kill even with DLC pack weapons, and C) heavy hitters. If you are confident in your ability to fight them, go right ahead, but there is an option that is a very high-risk high-reward route of getting to New Vegas. Entering the Black Mountain route.

The Black Mountain Route is like walking a tightrope. On one hand, you have deathclaws, towering, speedy beasts that will kill you in one hit. On the other hand, you have Super Mutants, who are armed to the teeth with high-damage weaponry and always travel in pretty big groups. However, if you know how to walk that tightrope, you can get to New Vegas easy without ever getting into a fight. If you think about it one way, you’re going to die from pretty much any combat encounter, so why not take a route with the hardest encounters?

It’s hard to go into detail from memory, but essentially, you need keep the “Main Road” north of Sloan to your left and the “Black Mountain Road” to your right. Use binoculars and stay away from any enemies as much as you can. Sneak the entire time. If you fail, try and try again! Each character you make will get you closer to getting past this obstacle. Walk along the ridge and eventually, you should stop seeing deathclaws. You can stop sneaking at that point, and go directly towards Camp McCarran. You can use the Wiki for the exact location, but another way to just spot it is to look for the monorail or the giant area with what looks to be multiple short tents draped over it. Head over there.

You’ll start seeing NCR soldiers, along with fiends. They will fight eachother, normally to the victory of the NCR, but you want at least one of the NCR to die. Grab their uniform if they do, and don’t get up close to the fiends. Once you’re into Camp McCarran, head into the main building, go upstairs, and make 2 lefts. There should be a sign saying “Monorail”. If you have a uniform, go on in. Ride the monorail and admire your accomplishments. You just passed the first hurdle of one of these runs, and one of the hardest!

If you don’t have a uniform, do the same. Just run like hell and take a stimpak. They shouldn’t catch up to your speedy train riding, but do it just to be safe. Don’t worry about the soldiers on the other side, they don’t get mad at you for using their monorail without permission. Either way, you’re in Vegas! What now?

It’s time to meet Benny! You picked a woman to start, right? It’s time to put that to use. Once you walk into the Tops, you will level up to level 4 from completing a quest. Pick “Black Widow” and “Educated”. Put all points into Speech. You’ll want it 75 or over. Once you’ve done that, head to Benny and pick the [Black Widow] dialogue choices. Go to his room and sleep with him. A prompt should come up to kill him in his sleep, which is the easiest way to kill Benny. He won’t put up a fight and no one in the Tops will realize. Bing, bang, now you have the platinum chip.

If you’re playing a man, you may have a hard time here. You need to kill Benny and get out as fast as possible. It’s possible, but risky. In this same scenario, take Confirmed Bachelor instead of Black Widow. Now you have the platinum chip!

I want to bring up one of my past blunders in this case. I was playing a man, and I decided to let Benny get away. When I was going to cottonwood cove, I went through Primm Pass and got killed by a deathclaw. This made me realize something. You need to travel through the wastes as least as possible for this run; things can catch you off guard and you will have very little say whether or not the vipers, deathclaws, cazadores or otherwise kill you. Very Hard is Very Hard; things do a lot of damage, and you don’t do much. Keep your adventures short, sweet, and uneventful. Kill Benny at the Tops, and you won’t have to travel to Cottonwood Cove.

Go to Benny’s room and meet Yes Man. He’ll be past a few doors to the right of Benny’s bed. You can discuss his plan for taking over Vegas. If you didn’t already realize, you’ll be getting the independence ending for the game. While not entirely necessary, it’s by far the easiest, simplest, and safest option.

Head out of the Tops for now and head to Gomorrah. Remember that luck stat? This is where you need it. Blackjack is the easiest game to gamble in. It’s easy to pick up on, and high luck makes it very hard to lose. Gamble until you have ~7000 chips and trade them in for caps. What on earth could you possibly need that money for? Well, let me introduce you to the easiest, most affordable, most defensive armor in the wastes; Combat Armor Reinforced MK 2. For around 6000 caps, you can have 25 DR with almost no effort. This’ll definitely get you through the tougher parts of the wastes. You can find it at Gun Runners.

Now you have armor, but you still need a weapon. And I have two for you, that you can use at the same time, no less! Meet Arcade Gannon, the best companion. He’s a hunk, caring, sarcastic, and great with a plasma blaster. What’s not to love? You can get him to join you from the aformentioned Confirmed Bachelor perk or a successful 75 Speech check. But I said two, didn’t I? I think I should stop saying this, but have another OP zero effort item at your disposal, the Alien Blaster. Wild Wasteland and Energy Weapons come into play here.

You can find this blaster on the bodies of the aliens due north of Horowitz Farmstead. Have Arcade take care of them while you loot the bodies. This weapon has a 100% critical chance, with albeit finite ammo. However, if you’re just looking to complete the game, you shouldn’t have any problems with ammo shortage. This should set up the equipment you’ll use until the endgame; Alien Blaster, Arcade Gannon and MK2 Combat Armor are a wicked combo that can keep you alive as long as you need it to.

Yes Man is interesting because you can tell him that you don’t want to do stuff and he will just let it go. You can find him in Benny’s room, and you can stop by him after you kill him, or just come back later. If you visit the location of every faction on the Side Bets quest, you can just say that you were there and Yes Man will mark them off the list. You don’t need to go to Bunker Hill, you don’t need to kill/protect President Kimball, all you need to do is kill Mr. House and put a chip in the El Dorado substation.

Going to certain spots can get tricky, though. Boomers create damage that can’t really be avoided. My advice? Stimpak and run like hell, as always. Stick to the sides and just book it. 9 times out of 10 you can get through without dying, but it’ll still be pretty tense. You may take around 2 howitzers, but you can use doctor’s bags to keep yourself going.

The other challenge is the Brotherhood. Be as peaceful as possible. Do what they ask until they remove your collar, and then get out of there. Tell Yes Man that you want them ignored and everything’s good.

Going to the El Dorado substation is the last bit before the final battle, but it shouldn’t be too difficult. Use a disguise if you need to. Eventually, you’ll get to the Battle at Hoover Dam.

The Battle At Hoover Dam (Or rather, the “Great Diplomatic Discussion” at Hoover Dam)

You’ve gotten this far without dying, so what’s a little bit more? You’re going to be thrust into a large-scale combat scenario, so just use stimpaks liberally and have Arcade and your Securitron buddies do the work. Make sure to keep Arcade alive, too. In hardcore mode, companions can die.

Squeeze your way past the fighting and get to the Legate’s camp. Use VATS for Alien Blaster headshots and you should be able to clear out the camp fairly easily. Again, liberal use of Stimpaks and rely on Arcade. I’m sure you’re familiar with this by now, but 100 Speech can convince the Legate to leave, and you’ll be able to beat the game without fighting him. Same thing goes for General Oliver; you can convince him to not fight you, and you don’t have to deal with his squad’s gunfire.

And that’s basically it! This was really just a compilation of known techniques, but they work well for a permadeath run. Apologies for the lack of pictures, wasn’t sure how to include them so I left them out. Hopefully my text-based guide helped out with anyone who wanted to try this!