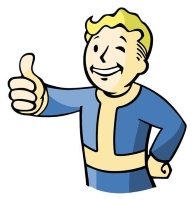 For people who are stuck in the early mechanics of the game, like with character creation procrastination and loot hoarding.

For the people who already play and love this game, this guide will be useless.

This is probably the first video game I’ve ever played and really, really liked. So this was kind of a journey for me. At first I didn’t think a guide like this would be necessary or helpful, but then I looked at the majority achievements, and it seems to me most people stop playing the game early on, and so did I a few years back. So I’m making this with the idea that a lot of people, like me, had or are having trouble getting into/understanding this game.

A game with stat distribution and perk picking can be a lot.

So you first real choice in the game is to either figure out what everything does or just go with it without giving too much thought. One requires a lot of effort into something that should be relaxing and the other one kind of guarantees that you won’t be enjoying the game as much as you possibly could.

I probably restarted the game 4 times before I stuck with a character, lost about 40 hours… Well, not really lost, I learned a lot. This is one of those games where you can finish it a lot faster once you figure out how to actually complete a quest. The figuring out part, the looking around is what takes up most of the play time. And that’s why it’s completely okay to redo a quest if you think you messed up, because the second go will much be much shorter since you’ve already figured out how you want it to go.

And then I discovered something beautiful: the console. Just a console command here, and another there, and I could respec my character whenever and wherever I wanted. So my advice is this: start the game with a just go with it attitude, but don’t restart if it looks like you can’t do something you want to, just respec in console!

One could call this cheating, but it’s not as if it’s god mode, and I never added my perks or skill points, I only replaced them or rearranged them. This probably seems useless and obvious, but it was a grand revelation when I realized it.

Link to the wiki page for console commands[fallout.fandom.com]:

Note: it probably is cheating if you’re always changing your stats so you can meet every check, but, eh, it’s a single player game, cheat if you want.

When you see loot, what do you do? You grab it of course! And even if you’re not sure of what it is what you’re grabbing does, you still grab it, right?! But of course, it could be the vital ingredient of some potion or weapon!

This might not be a problem for some, but it was for me, I would grab everything and absolutely clear a place of everything it had and lug it all back to my base, which would sometimes take 2-4 trips there and back again.

This probably isn’t as big of a deal with the people who play the vanilla version of the game, but I’ve been playing the Jsawyer Ultimate Edition, basically some unofficial added or changed game mechanics by the project director of the game, one of them being that the carry limit is halved. AND BOY DID I SUFFER.

But why was I suffering? It made me realize I was basically making work for myself where none was. While I was looting and transporting, I could’ve been doing some questing or monster slaying, some real flippin’ gameplay.

And that’s when I realized I didn’t need any of this stuff. But then the nagging thought came to me: what if I some day did… But then I eventually realized I could buy most of this stuff from vendors. And that the easiest way to make money was selling energy weapons. So that eliminated my list of absolutely must grabs from everything to just one.

Just installed a mod to make selling energy weapons stop being such easy money, so I might invest in crafting as a fun way to make caps.

You can store your items in containers.
You can hold Tab to turn on your pipboy light, and R to holster/unholster your weapon.
You run faster with the pistol or no weapon out.
Mod your game. It’s easier than it seems; it makes it look next gen and the features are intuitive, and the restored content is dazzling, and the performance hit can be minimal.(would share screenshots, but ENB doesn’t work with steam overlay)

My character ended up looking like this (opinions on each stat):
6 Strength Important for requirement of some weapons so you can actually snipe with them without any extra wobbling
4 Perception Generally useless unless you wanted points in lockpicking, explosives, or energy weapons
5 Endurance Not good or bad
5 Charisma Useless unless you wanted points in speech or barter, which I did.
8 Intelligence Great for more skill points and points in science, repair, and medicine.
8 Agility Great for more Action points and points in guns.
5 Luck Not good or bad

Focused on guns, repair, science, speech, and survival early on. Playing hardcore mode so I thought food was a must, but then I found an NPC to trade mats for food for me, so I stopped focusing on survival. And repair was more of a secondary thing for better maintaining of weapons.

I thought lockpicking was important early on, but then I realized it was just more guns and ammo on the other side of the vault, and I already had guns and ammo. What I really wanted was more dialogue options and more powerful guns.

I have put 70 hours into this game. I have not reached level 10 yet. And I love it so very very much.