This guide will show you how to do my favorite mission without killing a soul, including your target. It’s fairly easy when you know some tricks.Note that this isn’t a ghost playthrough, but that should also be easy only if you are careful enough. This is also not a completionist walkthrough either, but only one of the runes are hidden away, everything else is pretty easy to get.

What you will need before you start.

The below items/skills are strongly suggested.

First, the powers. You need at least level one in Blink and Dark Vision, and level two of Bend Time. You can get level two in all of these and Agility by getting every rune (even at the Hound Pits Pub) up to that point. 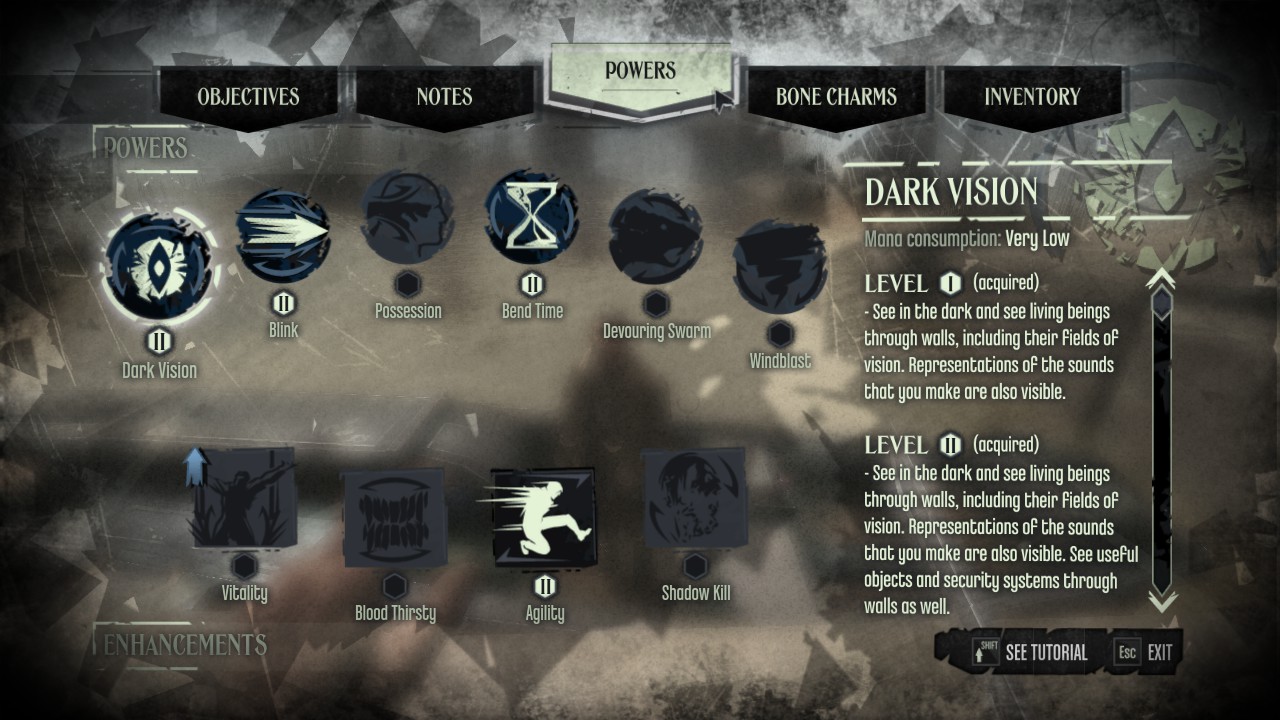 You should also have a good amount of Sleep Darts in case you alert anyone and need to neutralize them quickly.

The below items/skills are optional and can help a bit.

These bone charms each give a little oomph to your capabilities, but are entirely optional. Keep in mind that some of these are from the Preorder/GOTY edition, and I can get 10 bone charms because of that. 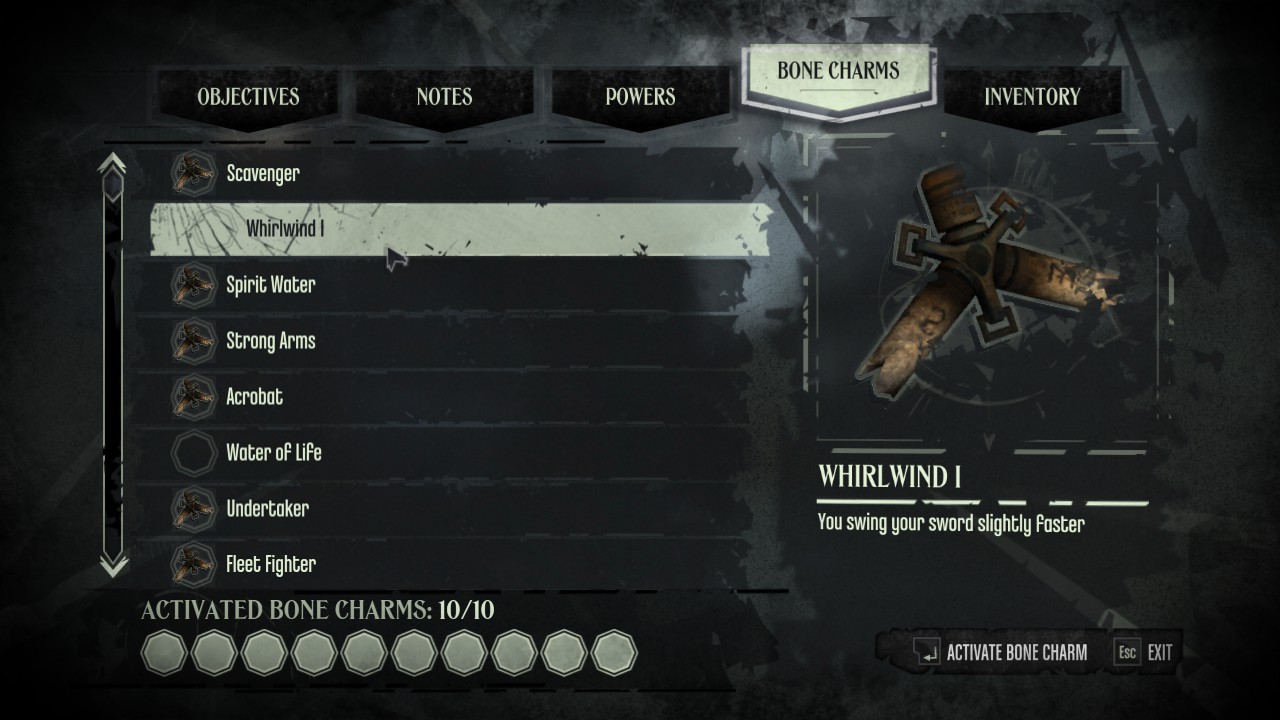 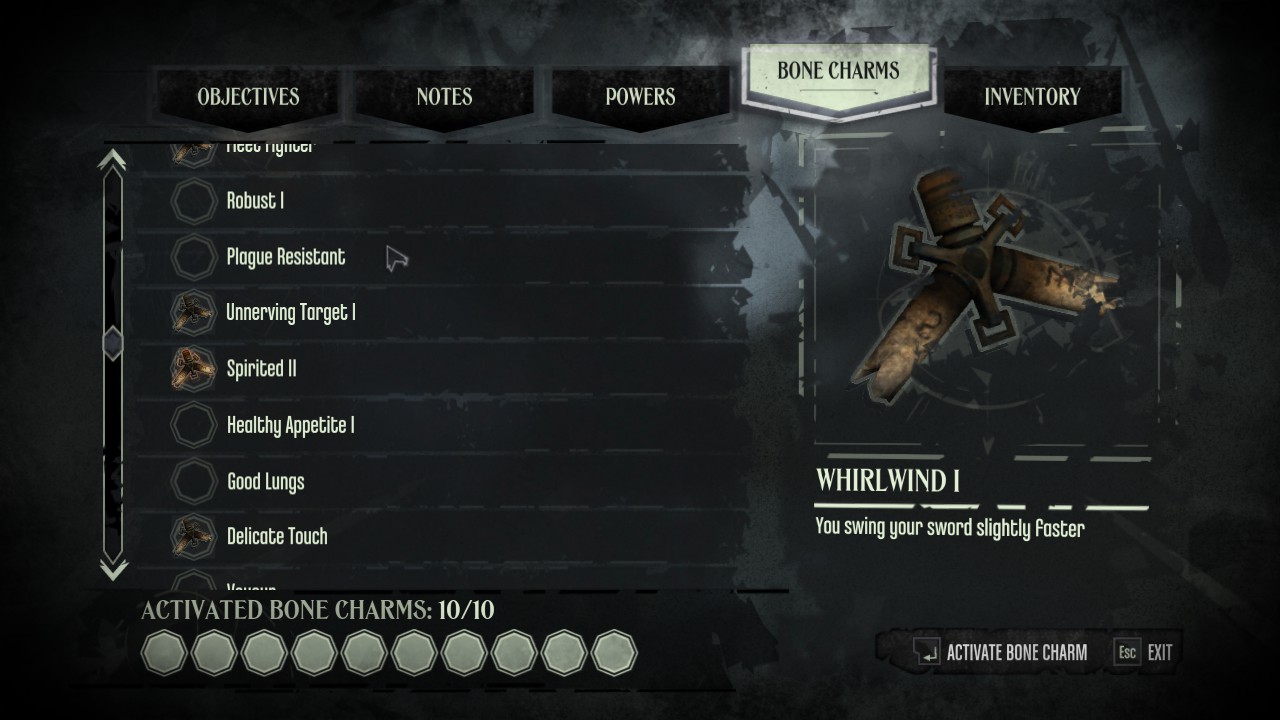 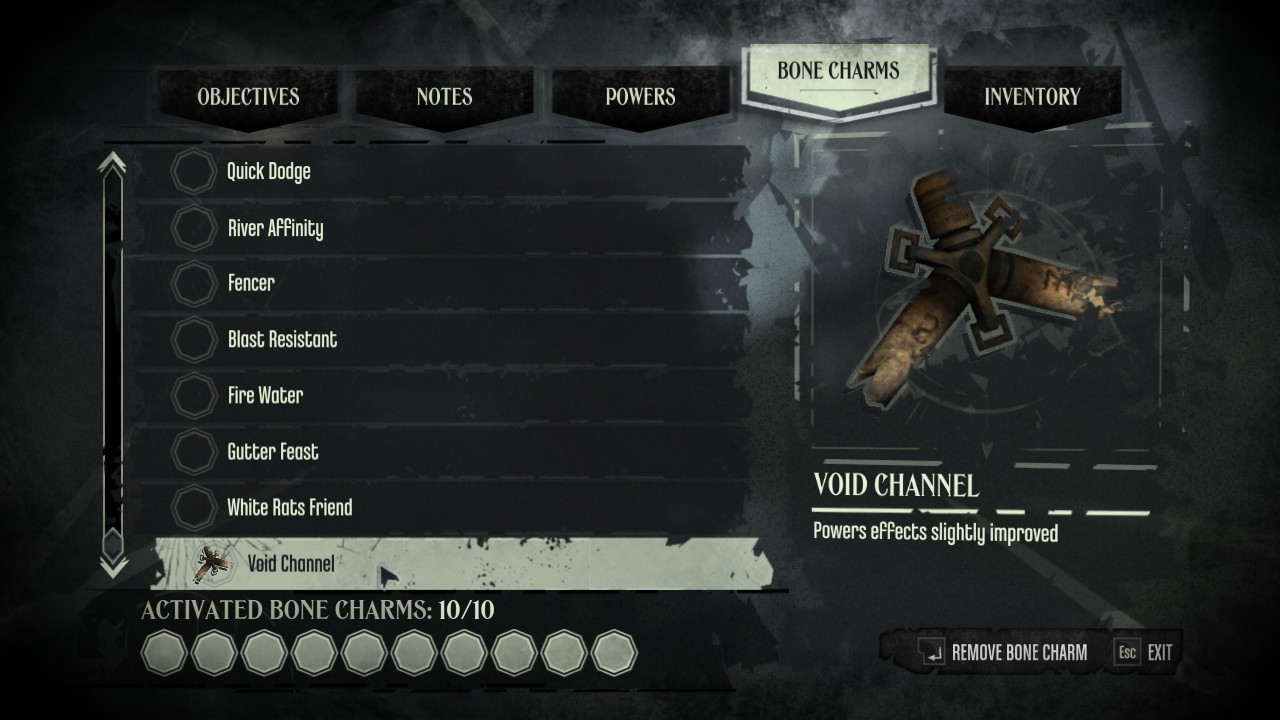 Getting Into the Party. 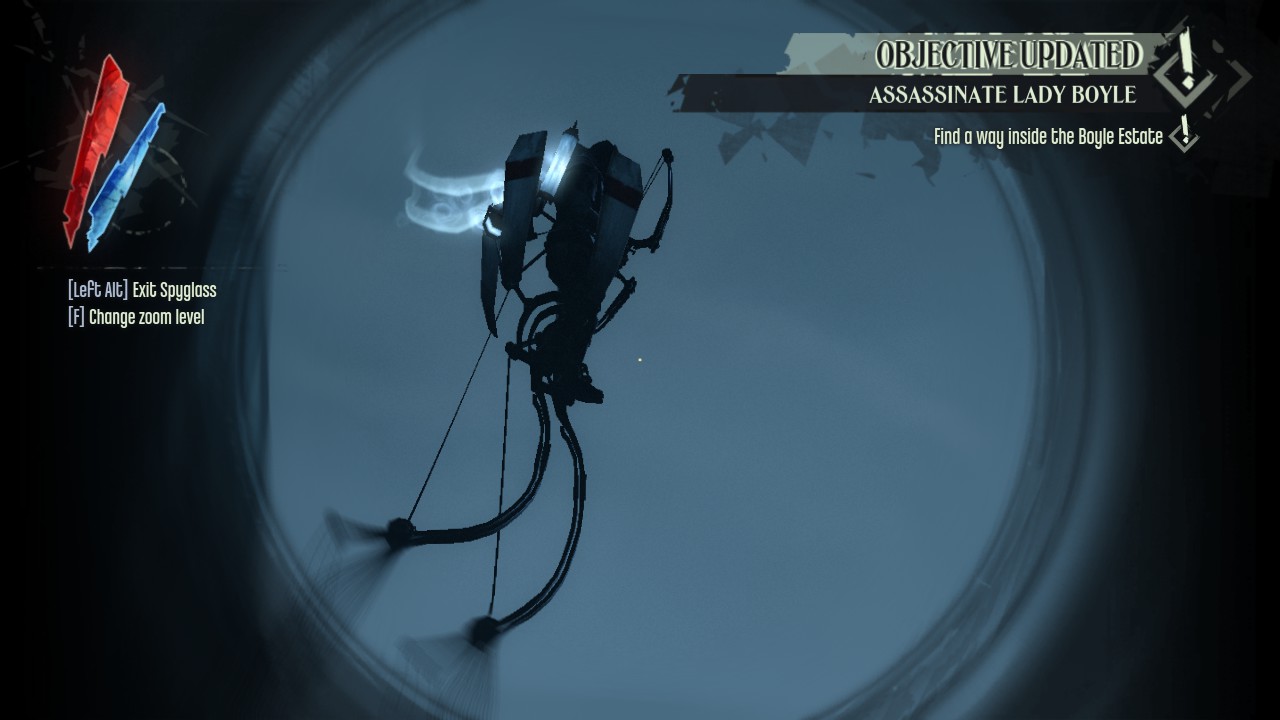 This mission is the first to introduce you to Tallboys. These guys walk on stilts and carry bows armed with explosive bolts. They also have headgear that will spot you even if you are hidden.
They are fairly easy to avoid because they move in a straight line, and there is only one of them here. 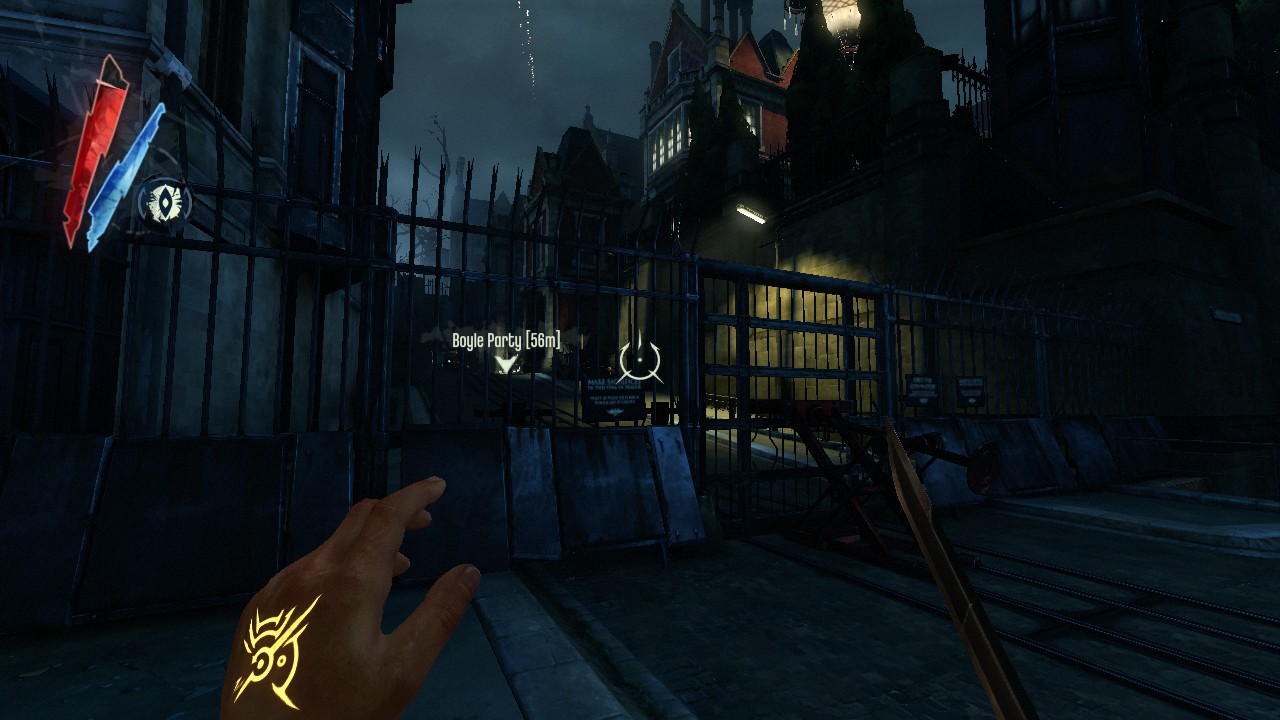 This is the normal way into the party. You must Blink over the sharp fence shown below and proceed to the people in the far side. You will need an invitation to get in this way, but there are two ways to get one that I know of. The first way is to wait until the wind takes a woman’s invitation into a nearby corner. Just pick that up and you are in! The second way to get an invite was all the way back when you rescuing Emily. There is an art dealer’s apartment and in it there will be a safe. Crack the code and in it you will find an invite.

If you are too cool to get in like the rest of the partiers, you can always walk down the street from the fence I explained in Entrance 1 and find a little crevice. 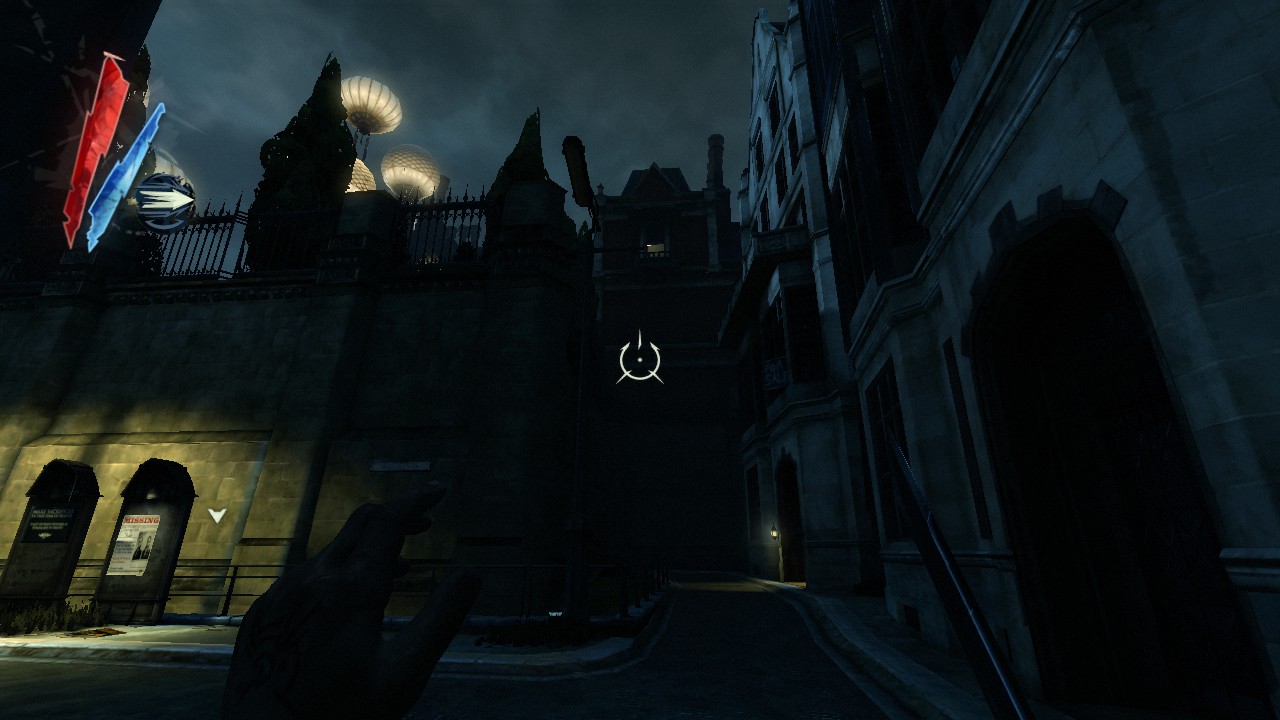 Here you will find an area a Tallboy and a guard patrols. Be careful taking out the guard though, there are rats there that will eat up the “corpse” so dump him somewhere above ground.

Walk indoors and up the stairs, avoiding the weepers on the first floor. At the top you will find a window to hop through and into the next building. 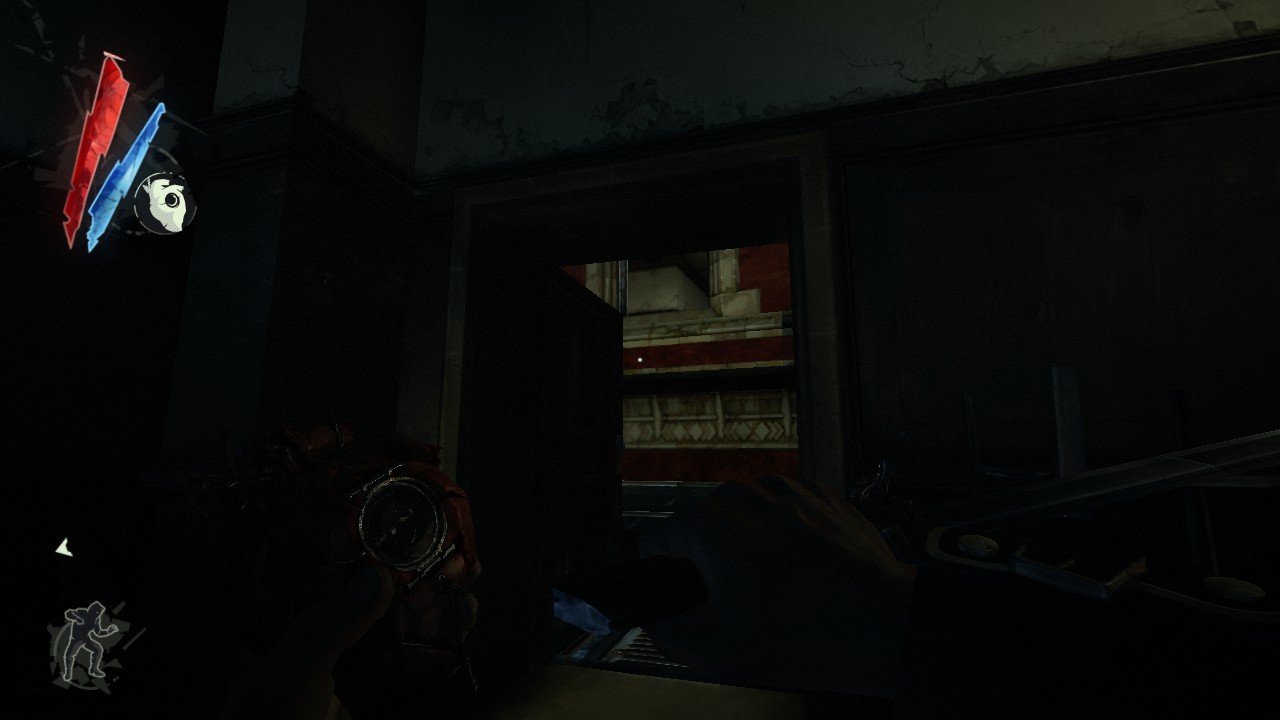 In there, you will find a locked door between you and your party. Lucky for you, someone’s left a key to the right of the window that fits the door. 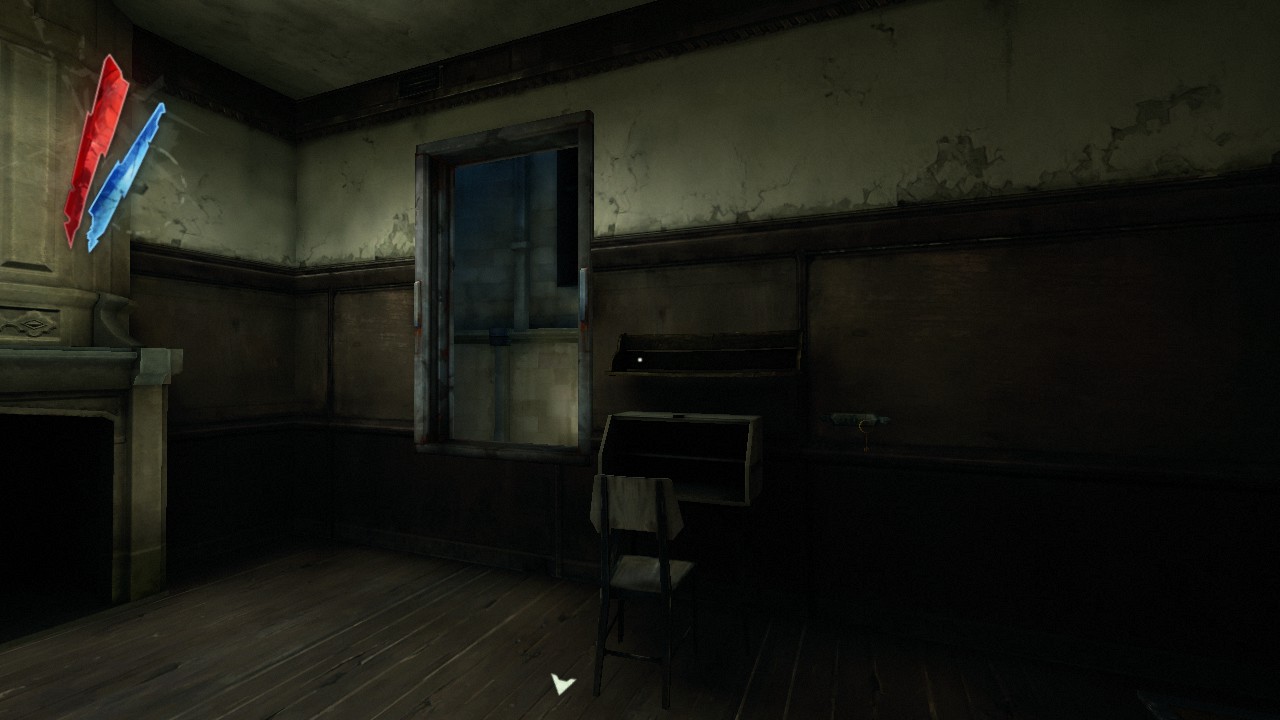 Simply follow through there and you are now in the party (but still outdoors.)

Pendleton wants you to do something for him.

Before you enter the party, go and find a dude named Lord Shaw. Pendleton will have talked to you about him before you left for the mission. 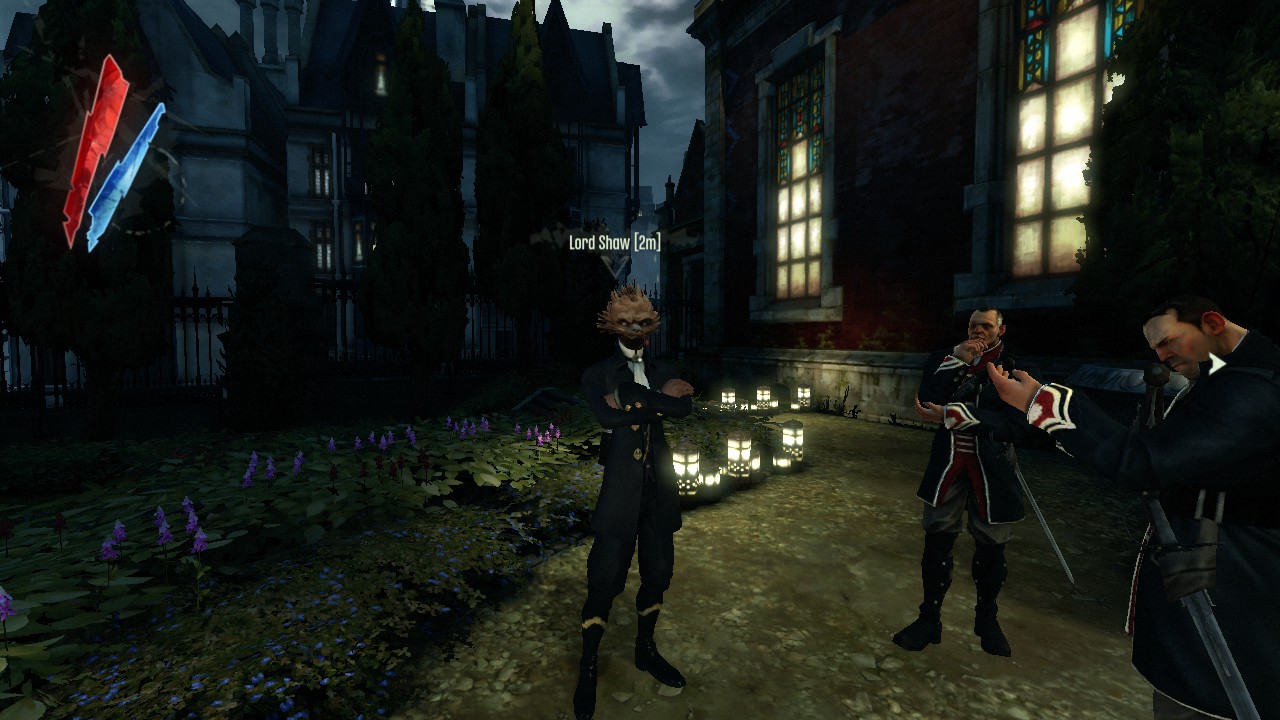 You will give him a note, and are suddenly part of a deadly duel! Don’t worry, You won’t have to kill him.

You are meant to pick up a dueling pistol, which is required to start the duel, but not required to take out Shaw. 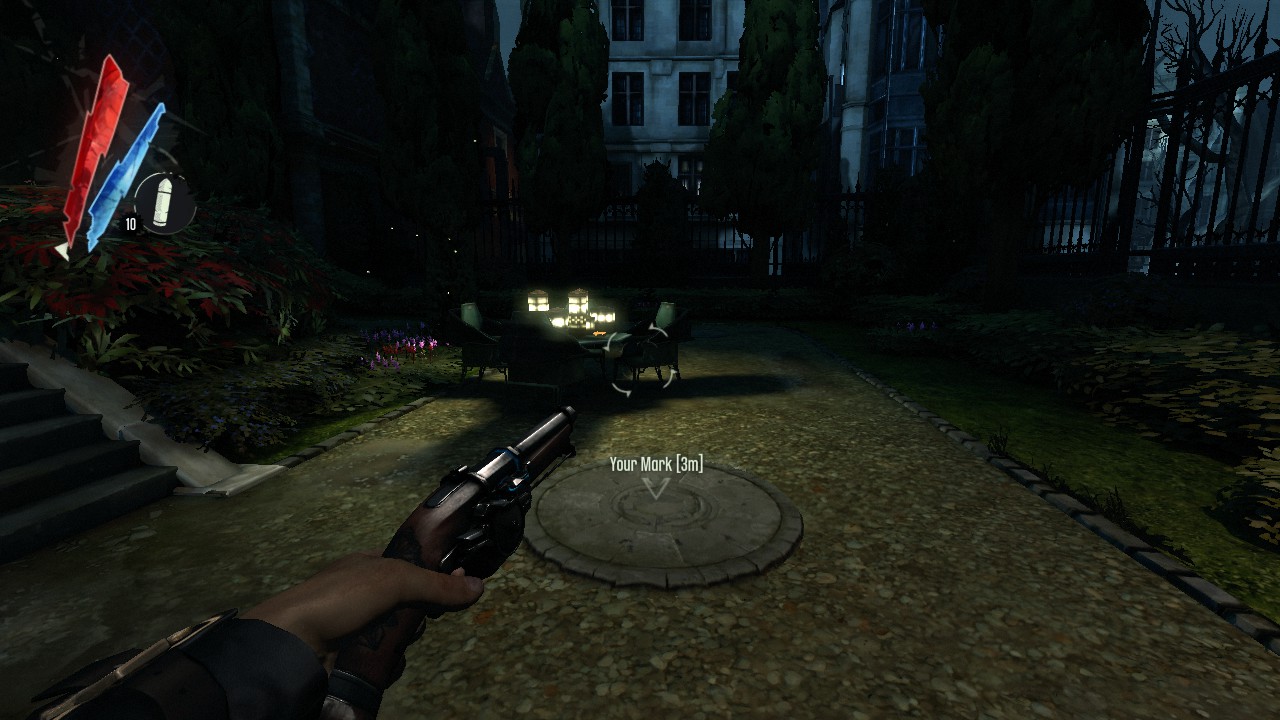 Stand on your mark and then take out that crossbow and arm it with a sleep dart. When the guard counts to three, simply turn around and shoot him with the dart instead of the pistol, and he will drowsily collapse harmlessly on the ground. Steam user Hedgy pointe out that you need to make sure Shaw is looking at you before you take him out or the guards will think you’re hostile. 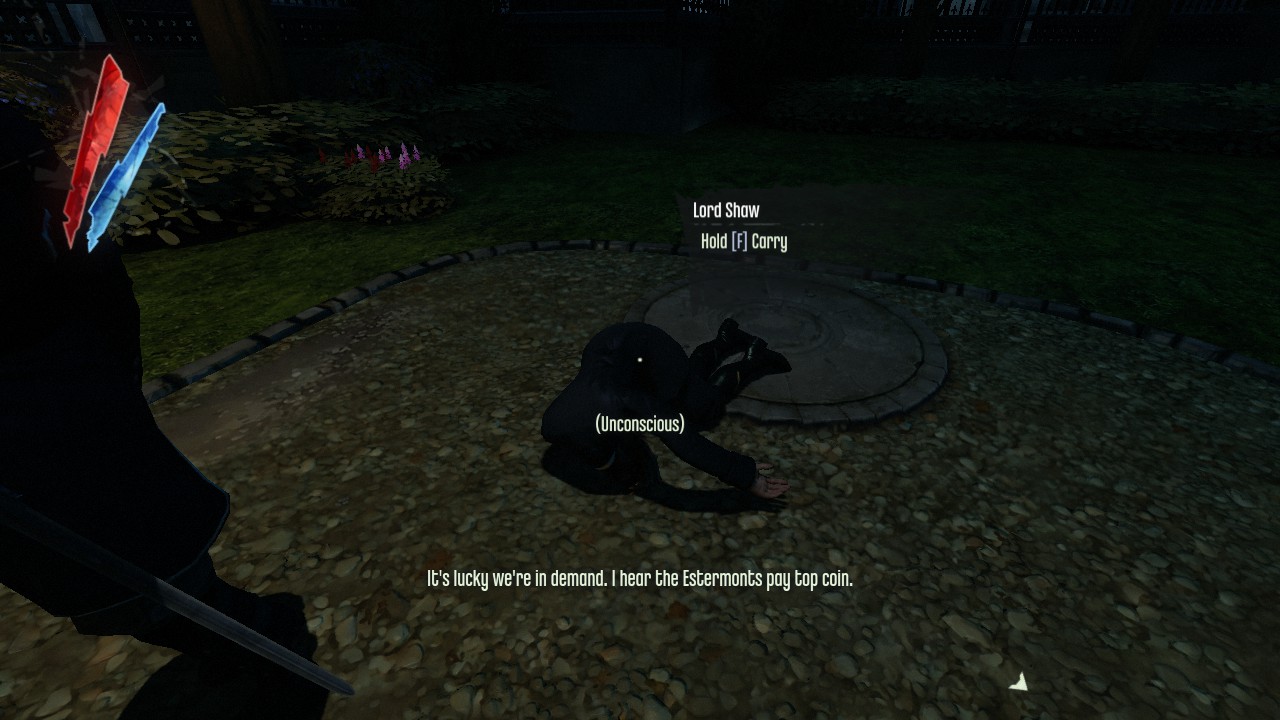 The guard will say that he is dead, but he really isn’t, it’s probably a glitch or the devs didn’t expect you to duel him on a no kill run. And there you have it: Lord Shaw gets rekt and without anyone dying. And you get a rune from Pendleton.

Take it in, this magnificent estate. 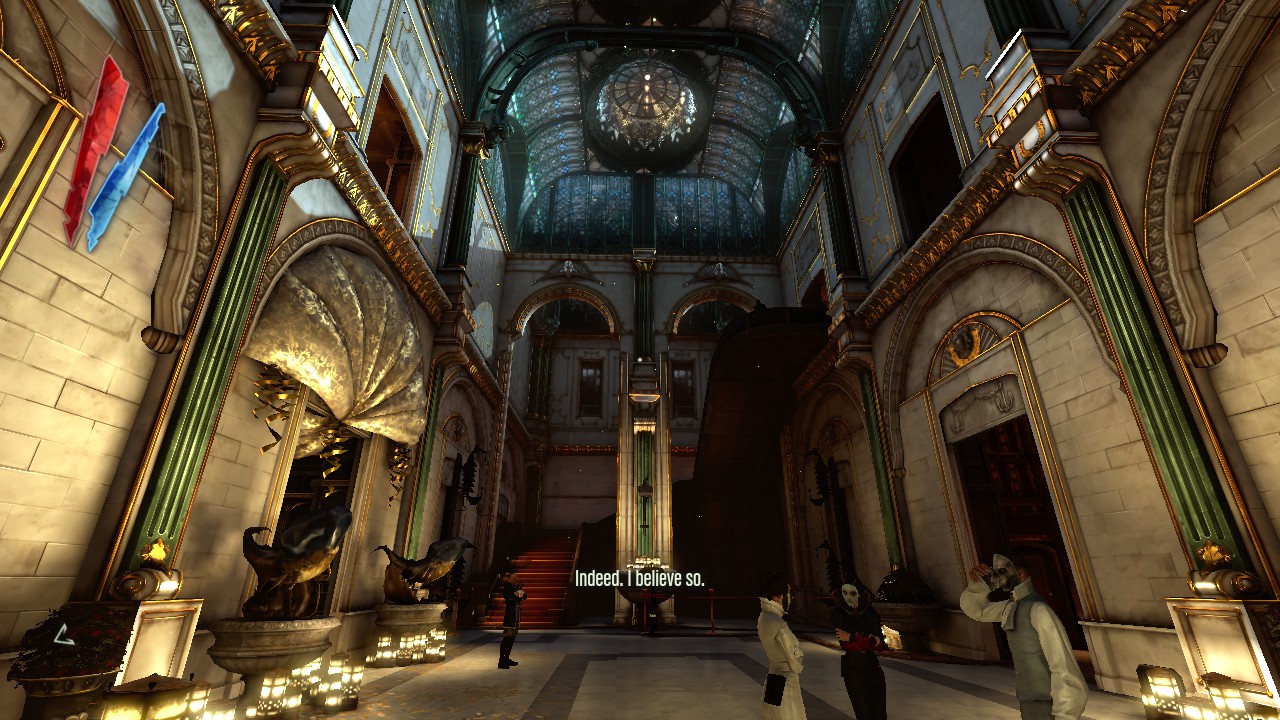 It’s a really pretty house, but you have a job to do, and the most direct way calls for no sight seeing.

There are multiple ways to do this next part, which is why it’s my favorite level. Your main goal is to take out Lady Boyle, but she is one of three sisters, each wearing an identical dress save for color. You can figure out which Boyle is the right Boyle by sneaking upstairs behind the scenes, reading diaries and sniffing panties, or kill all three outright, or go the more… socail route. 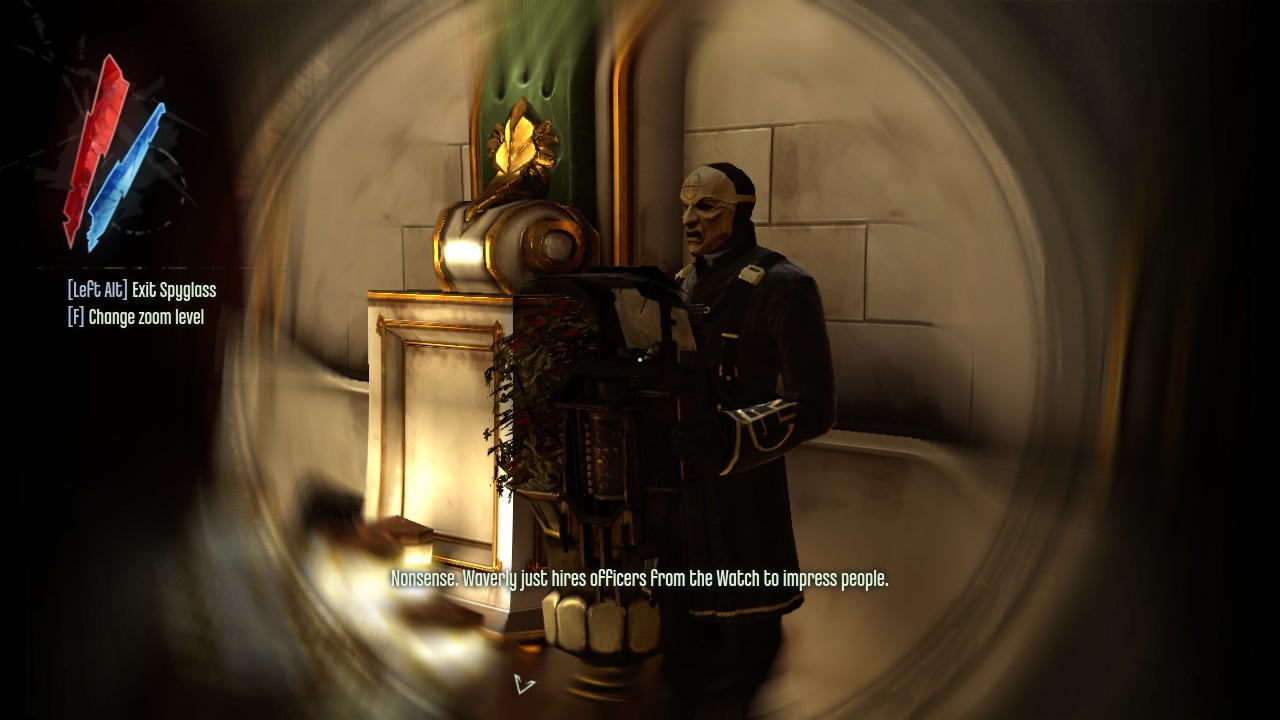 These masked Overseers will carry crank operated boxes around if they sense trouble. If you are nearby when one is being operated, it will disable all magic, blur your vision, and drain health. But that would only happen if you get caught.

Which Boyle is your target?

This part of the mission is randomized every time you play it, so don’t feel spoiled if my cover image is the black dressed boyle. Your target is either in the red dress, the black one, or the white one.

Going about this stealthily is fairly simple, given that you are incognito so long as you don’t cut someone there. Just talk to some of the guests there and they will give you ideas. 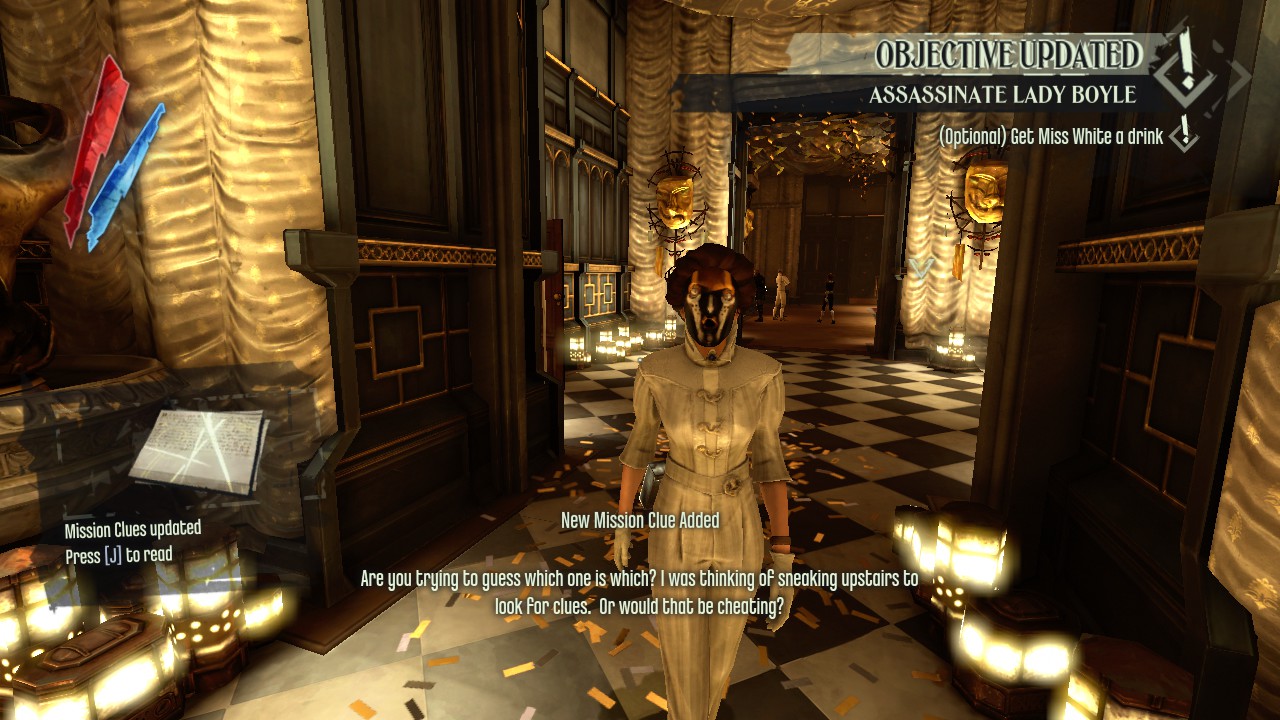 This woman will tell you she was going to sneak upstairs to cheat, but she doesn’t have the mark so she failed horribly. Also her mask makes her look like a tick.

Another woman, Ms. White, has a lot of info, enough of it to quickly determine each of their names. She sits stationary in one of the rooms left of the door you came in. she wears a cool fly mask. 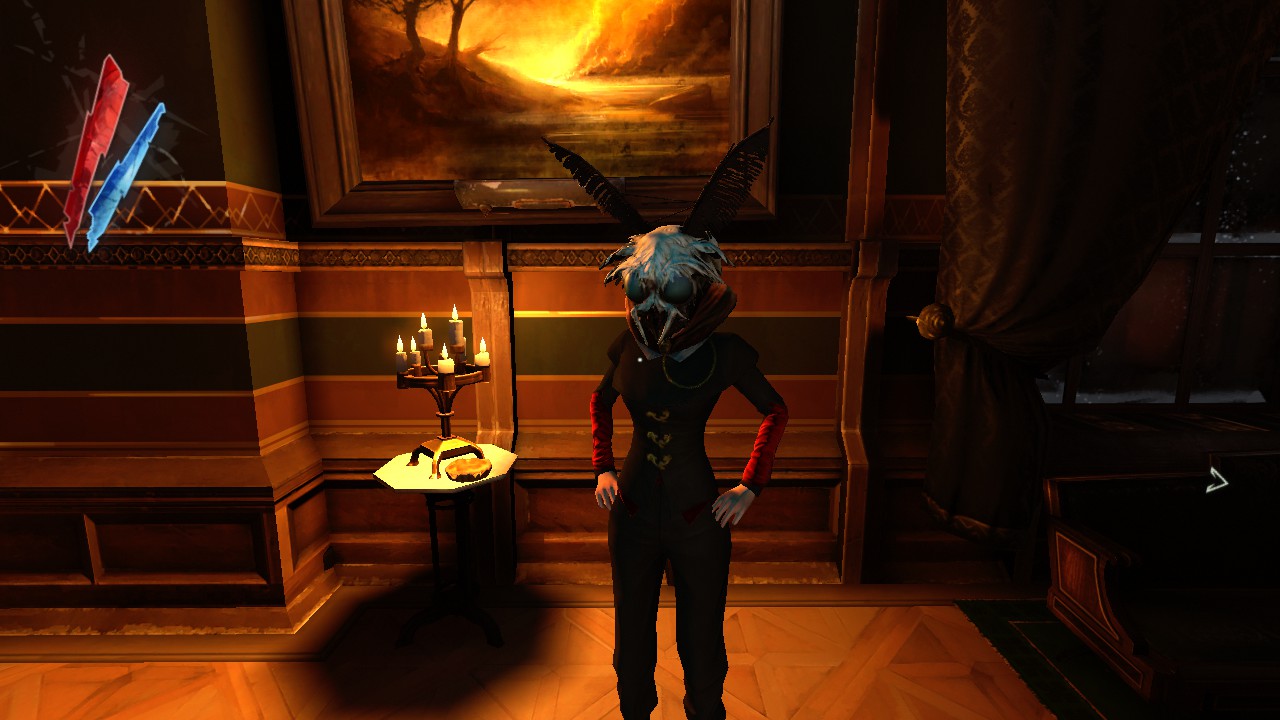 She will want a drink. there’s a waypoint for you to a fountain full of cider, go there and quench her thirst. She will say something along the lines of “Well I can tell for sure that X is wearing Y. Additionaly A is in B,” those are the people and the color of dresses. That would make more sense when you play though.

Your next task is to have a jaunt over to this dark room down the hall from Ms. White. 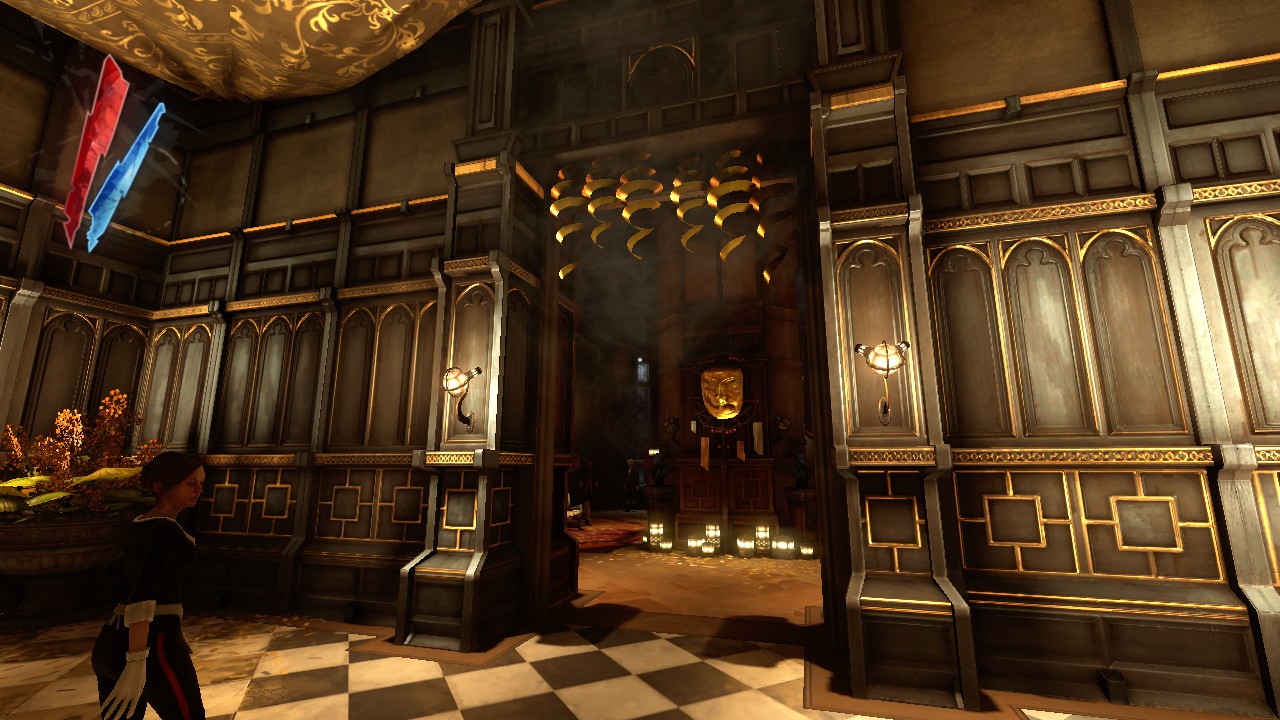 In here will be a lot of people smoking and drinking. Your contact will single you out if you get close enough but he looks like this. 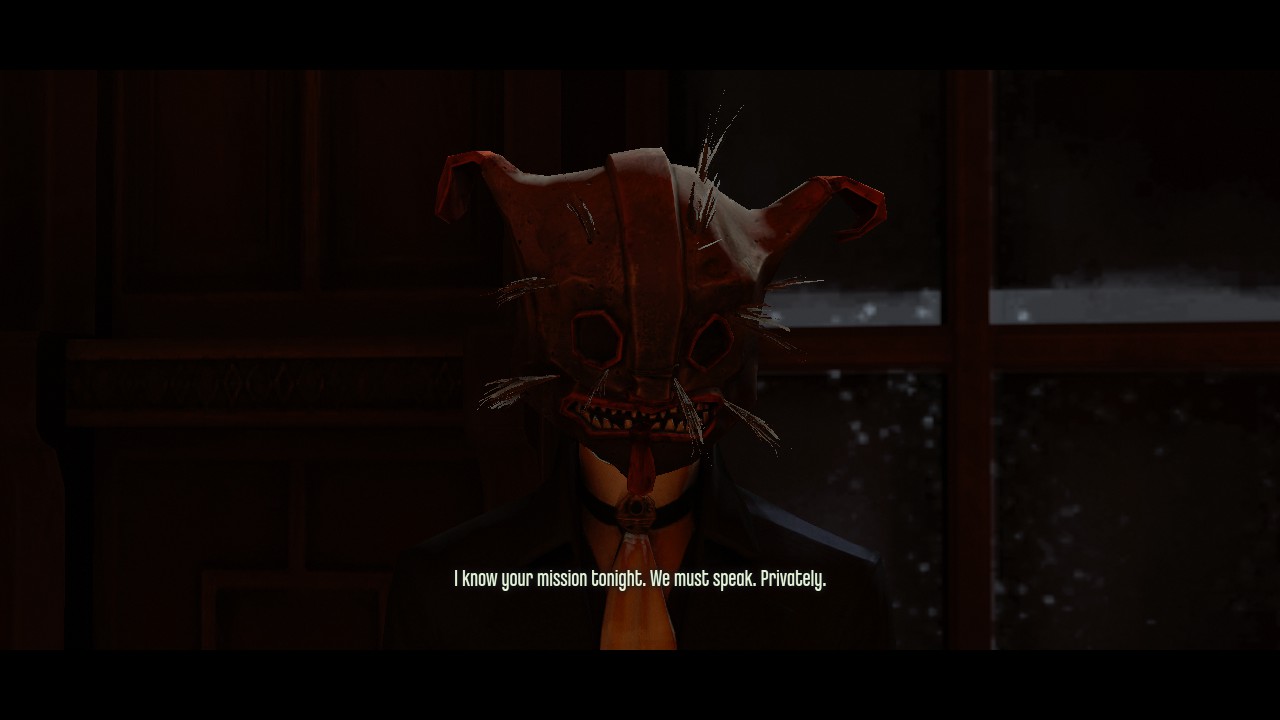 He will explain that the real Boyle is his lover, and that he knows that you are there to kill her. He wants you to take her unconsious body downstairs to him. He will tell you her name only. But since Ms. White told you the names of two of them, you can use process of emimination to find the right one.

Making a hostess leave her own party? Impossible!

So you know the name of the Lady Boyle that you must take out. What now? Your nonlethal objective is to take her sleeping body downstairs. The best way is to go talk to the one you need to smuggle. 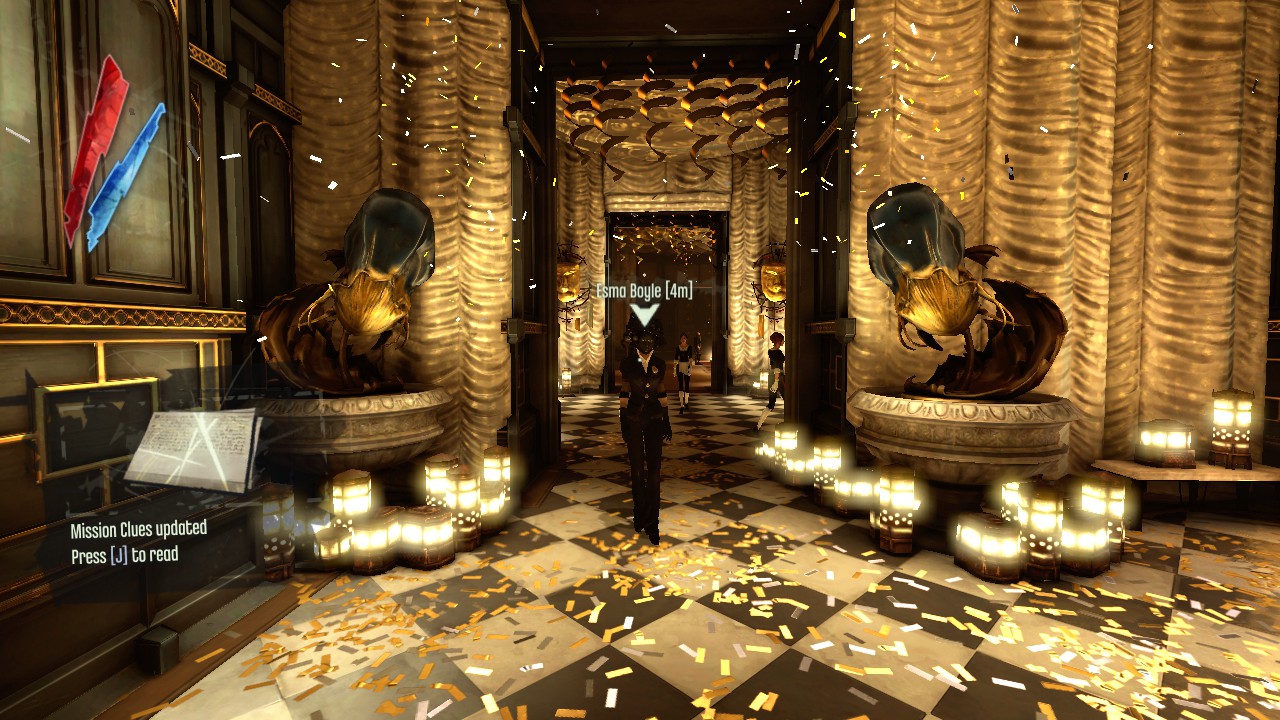 This is the one that I needed to get, but bear in mind that yours might not be the same one. Go up and talk to her. She will say something different depending on the woman. I said I can guess her name and win her game. Then when she asks who she is, tell her you would rather say somewhere quiet or something. Then follow her upstairs.

I’m not kidnapping! She just… had too much to drink! 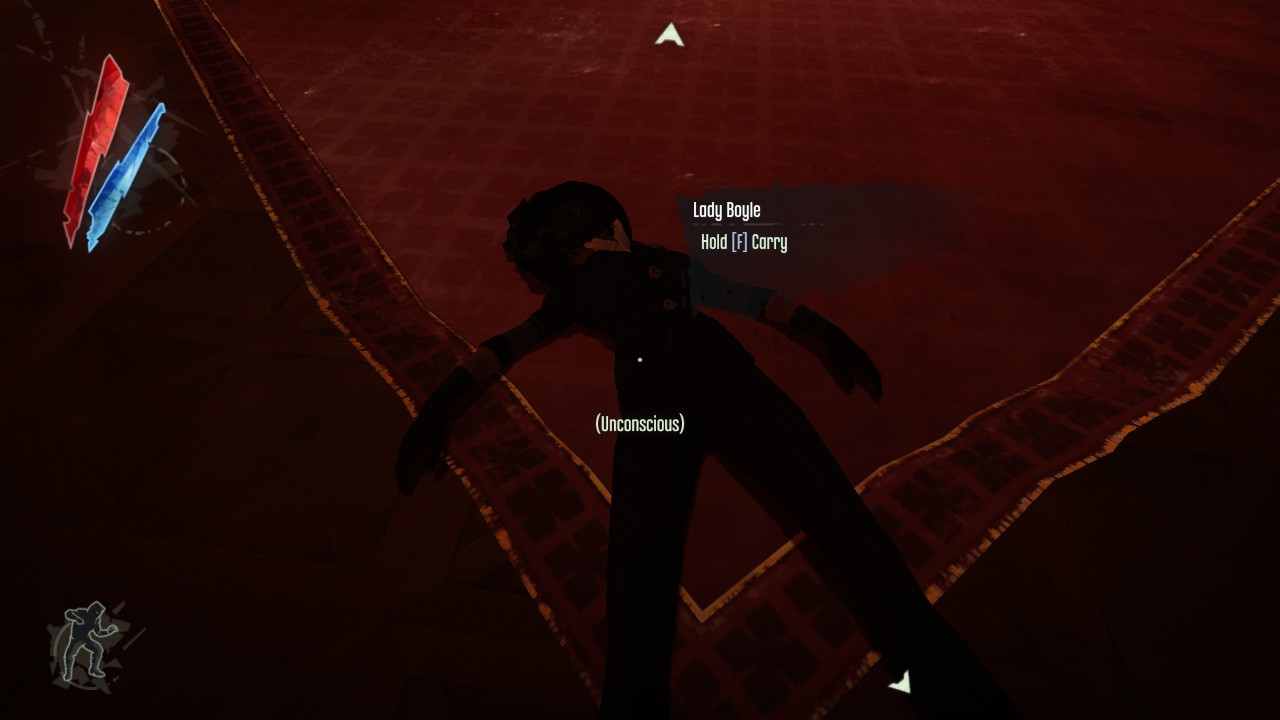 Usually getting her upstairs is enough to make her sleep, so do that and start lugging her body. It’s easy to get her downstairs. You have to sneak her past the guard and just go down instead of back to the party. Downstairs there will be two maids. If they see you, they will cower in fear. For good measure avoid them completely or trank them. 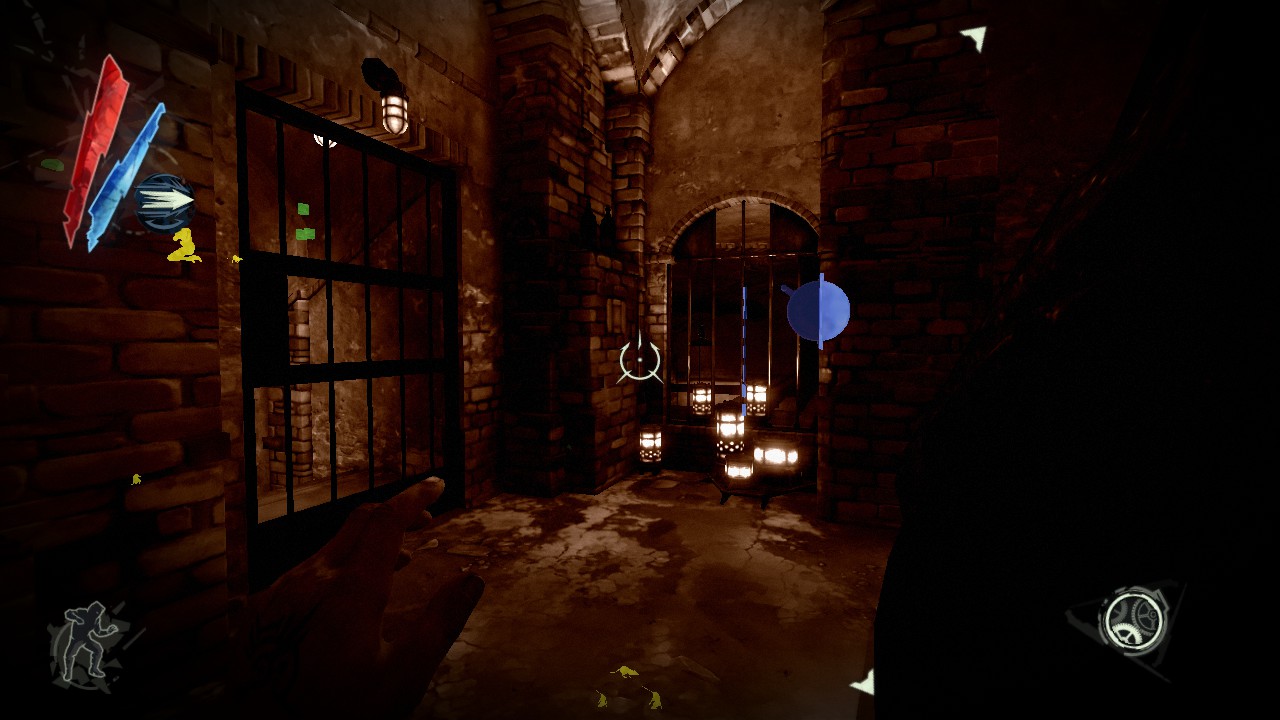 If you go down the stairs on the right wall you will be in the wine cellar. Just throw the lever and unlock the gate. 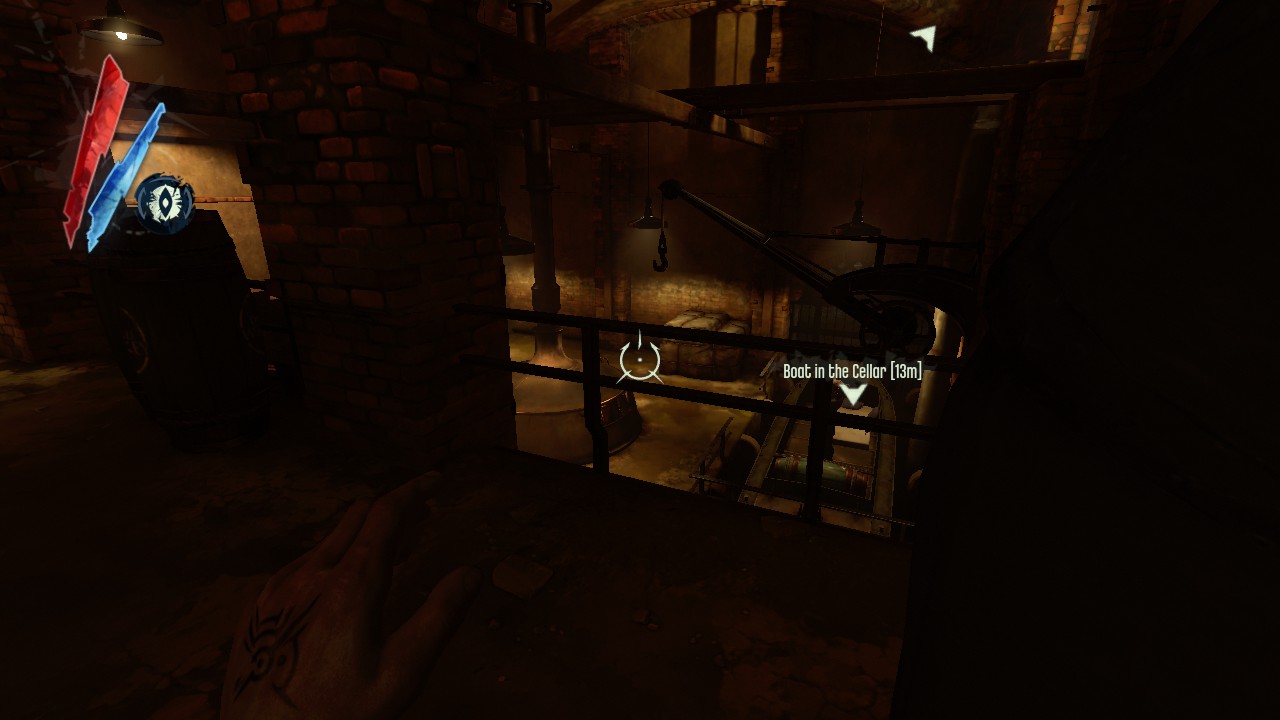 There is an enticing guard rail in the direct route to that creepy dude, and jumping that seems like a good idea. However, in mid air you will be close enough to the guy to trigger the cutscene, dropping Lady Boyle. The fall from that height will kill her. Go around and be careful when approaching her lover. He will gondola her away, out of the way of the loyalist conspiracy and anyone else.

At this point, the guards will attack you on sight, so be wary of them. The closest way out is back upstairs on the second floor. 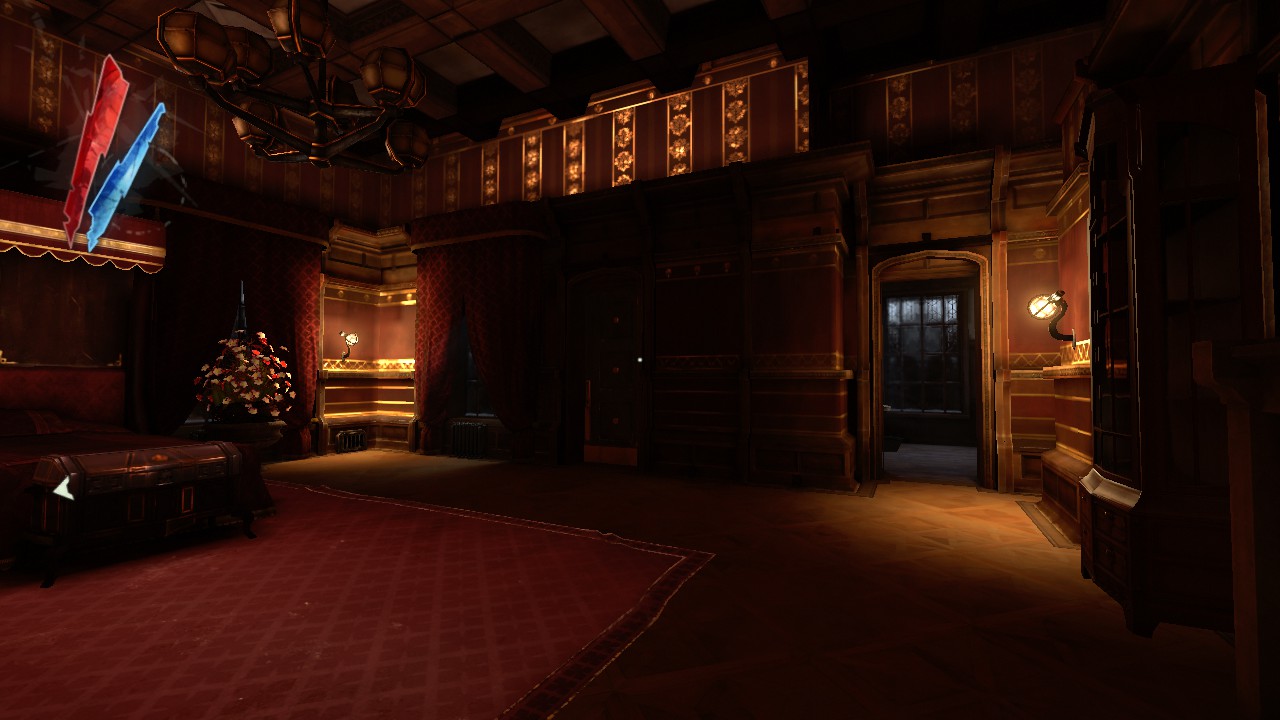 That door will lead to a balcony. Outside the guards won’t attack, but there is a rather friendly guard that wants you to go back inside. Leap off the balcony and make your way back to Samuel. 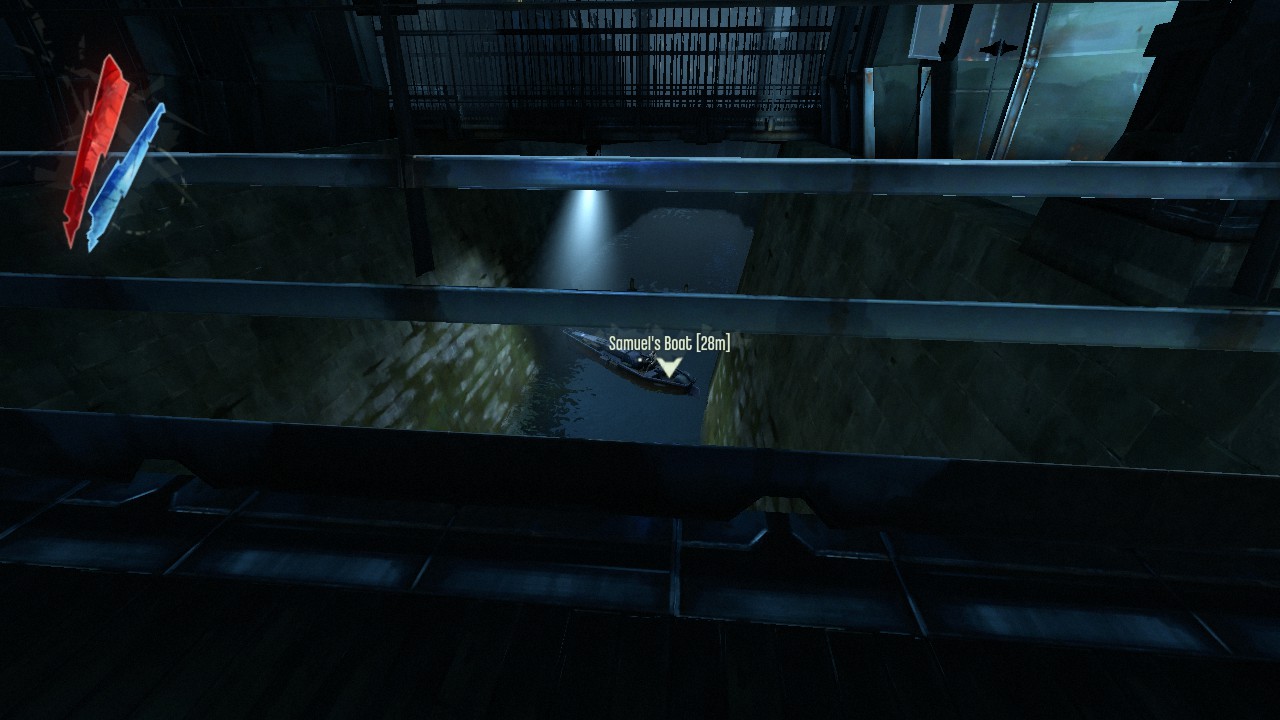 Samuel will have moved, and a gate is closing fast. Don’t bother sneaking under it, there is a walkway you can take to get around it. 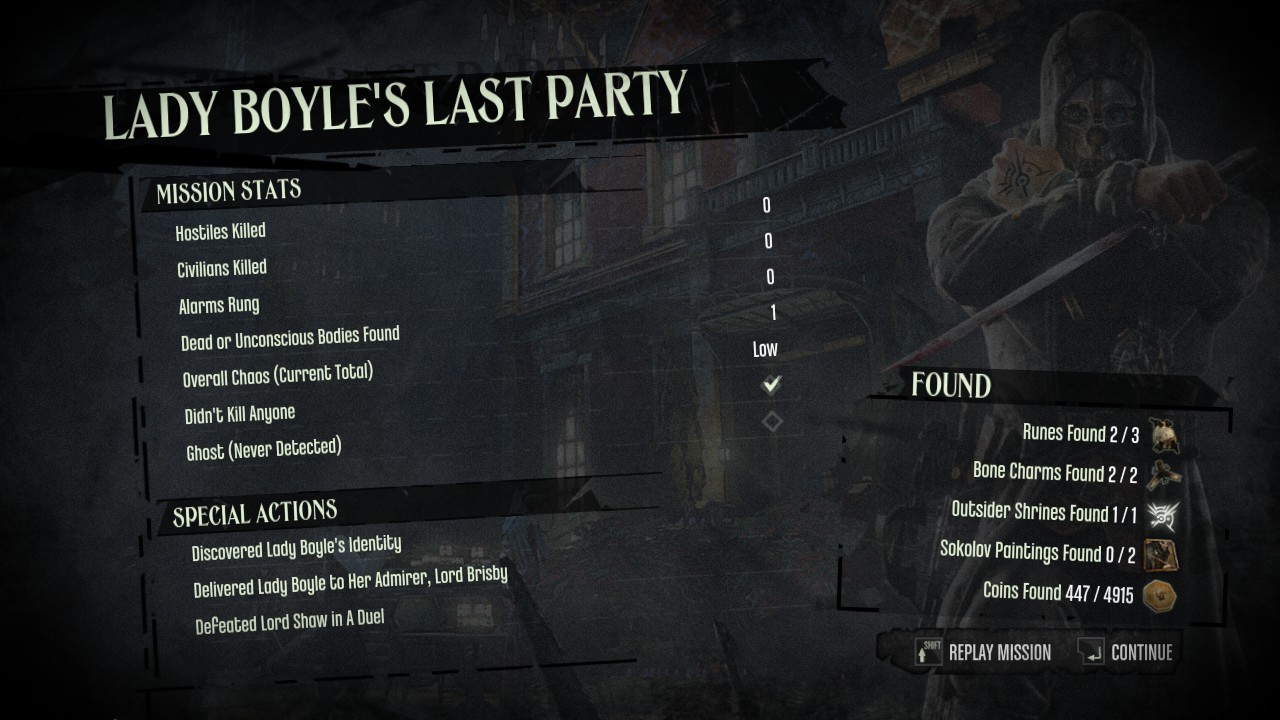 And there you have it! Lady Boyle’s Last Party has been complete with that didn’t kill anyone checkmark ticked off.