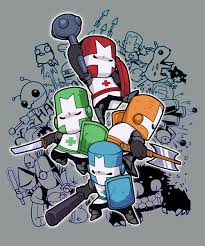 Hey everyone! This is a guide to help you easily beat the bosses in this game. Remember, there might be some bosses that I didn’t list, so don’t kill me. I hope this helps you.

Here’s How This will Work.

So, I am going to put the boss battles in 3 at a time, so I don’t have to waste my life and your life scrolling endlessly and burning holes through everybody’s eyes.

First up is the Barbarian Boss.. Whenever he shoots the spikes, use your shield. If you want to do melee attacks, go up to him and attack. When he goes to punch, shield. When the normal barbarians attack kill them they will drop fruit so you can heal yourself. This is the best way I found.

Abandoned Mill: It’s simple. Follow the head deer (AKA the deer in the front), and you should be fine. If you are playing 4 player well then it will be A LOT harder, and I suggest being back and waiting to see where the door is. But you should not go too back, then you will get damaged even when you go through it.

CatFish: Stay at the boat and shield. You should be fine if you have long-ranged magic. Destroy the hairball it chokes up, and then shield yourself from it’s punches. You can also use arrows if your magic regen isn’t long enough. Stay in front of the boat, or this might not work.

Pipistrello: The annoying bat. Like the CatFish, stay in one spot. When he comes to lick you, shield yourself. When he pauses, you are free to attack. If you stay like this for the whole battle, he might not get up and take a crap all over the floor and bring in the other bats.

Industrial machine: When the things pop up on the floor, attack them as fast as possible or they will dissapear. When the hand comes just spam arrows. When the flamethrower /ice cannon/ poison comes, attack it after it shoots. Don’t walk on the red floor tiles, or they will deal damage to you.

Wedding Crash: Just normally battle the Coneheads the way you do. When you get to Wedding Conehead, attack relentlessly. Do NOT let him get to the organ. It might not work for you, but it works most of the time. Using red knights magic is recommended.

Cyclops: Three words. Magic and Shield. When it throws knives, you can block it with your shield. If he is running after you, delay him. When he stabs the ground, it is the right time to attack, even if he is at half of his health and has a red border around him. Remember, if you don’t have potions, you can always use the vases for food.

Volcano: Use a sandwich and attack from the left or right.

Dragon and Sock Puppet: DO NOT get up close to the dragon. Instead, use ranged attacks like arrows and magic. I’m sorry, but i’m not sure about the Sock Puppet.

UFO: Pretty easy. Just jump and do combo attacks, and the pyramid parts it drops are also easy. Just run in a straight line.

Volleyball Match: Hit the ball before it hits your side, and attack the other side so they cant get the ball to your side.

Medusa: Well, when the snake shoots poison, use your shield. I suggest melee for the first part of her health (aka before she has half health). When there are tiny snakes everywhere, use arrows. It’s much easier.

Ice King: Magic. Melee isn’t very easy because you will just slide, and he can teleport.

Painter: Use arrows to kill the paintings easier. When he actually just stays down there, and there are paint creatures spammed everywhere. use MAGIC. it will clear the paint creatures faster, and then you can charge at him with melee or whatever attack.

Undead Cyclops: I suggest you do what I advised for the Cyclops. When the Undead Wedding Conehead comes out of the coffin, just run. You can’t hurt him, and if you try to, he’ll just hurt you more.

Necromancer: Magic and shield is much easier for this battle. He uses magic mostly, so do what he does. Red knight is recommended.

Wizard; Crystals: run around until there are crystals stuck. Eventually they will be destroyed if you attack them when they are in the ground. DO NOT attack them if they are spinning. It won’t work.

Wizard; Bubble; Blue is magic, red is melee. Melee is just what the Lava demons magic is, but it’s not fire. Magic is just the Dark balls that the cultists and skeletons shoot.

Wizard; Fat Cat (AKA Fat Wizard): Just do your jumping attack. That’s all you can mainly do.

Wizard; Arachnid Demon: Just run. I advise you do this whole battle in Multiplayer. Multiplayer: Have one person run around (That person should be the one being chased by the Arachnid Demon), while the other(s) attack. Singleplayer: Just use your jumping attack and try not to get hit.

Wizard; Sword: Not easy to explain. Just try to attack him with your jump attack when he shoots the meteors, and when he spins, just run out of the way. Magic is not really easy to use on him since always just runs to random places, but it can do a lot of damage if you hit him with it. When you attack him with magic, it does no special ability. Example: It does not freeze him or burn or poison or whatever your magic can do.

Well, thank you for reading this, and I hope it helped you. Like I said, I might not do all the bosses in the entirety of the game. This is my first guide, so i’m sorry if there are some weird parts. Good luck!
Oh, and this might be updated a LOT, so yeah. :3
If you want to play with me in game, then just friend me! 😀