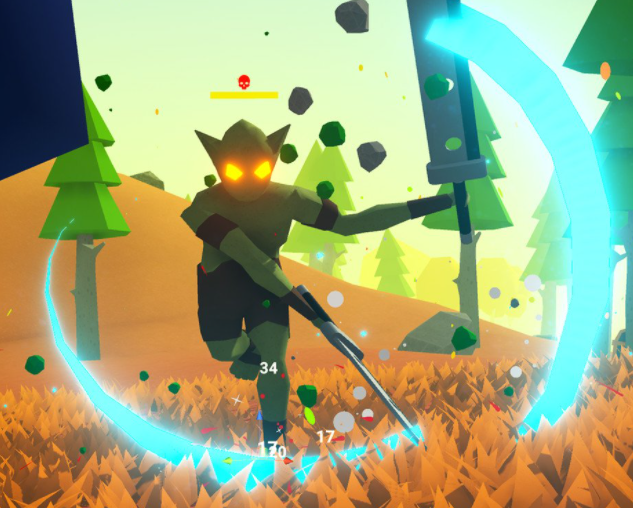 how to kill gronk man

Before fighting gronk, I highly suggest getting a sword, or something (Hammer?, rock)
the reason for this is the sword is very fast, and of course, it’s a SWORD. Common sense here, anyways, I also recommend armor of some type, doesn’t matter what type of armor you have cause you’ll most likely have a few health upgrades as well, but Mithril is suggested.

So you made this far, You have a sword, armor, and maybe some upgrades along the ways.
So Gronk has three attacks, I will be giving them my own names cause I have no idea if the moves actually have names.
1. Ah, yes I cut you into millions of pieces – Gronk will sprint towards and if you get to close you might get caught in this attack, if you have the frog powerup I recommend triggering this attack then evading it, or just running from it. Gronk will have a short cooldown/stun after he does this attack this is your chance to attack run in there and get as many hits as you can.
2. Ayo watch your blade AYO WATCH YOUR BLADE – Gronk will throw both his blades at you they do serious damage but are easy to evade, just keep running in one direction and they should both miss you, Gronk has a short stun after using this move, if you want to you may attack him at your own accord.
3. I hate the ground – Gronk hits the ground with his blades causing blue projectiles (blades) to come out at all angles, to avoid this attack just evade the projectiles by sprinting out of the way, or jump over them.
So there you have it those are all his attacks and how to avoid them.

A lot of people are scared of Gronk, or just unsure of him. I was to, but I hope my knowledge helps new players, or even people who are experienced, If I get support I might consider updating this guide if Gronk gets changed or if I missed something, leave a comment if you have any questions or tips.