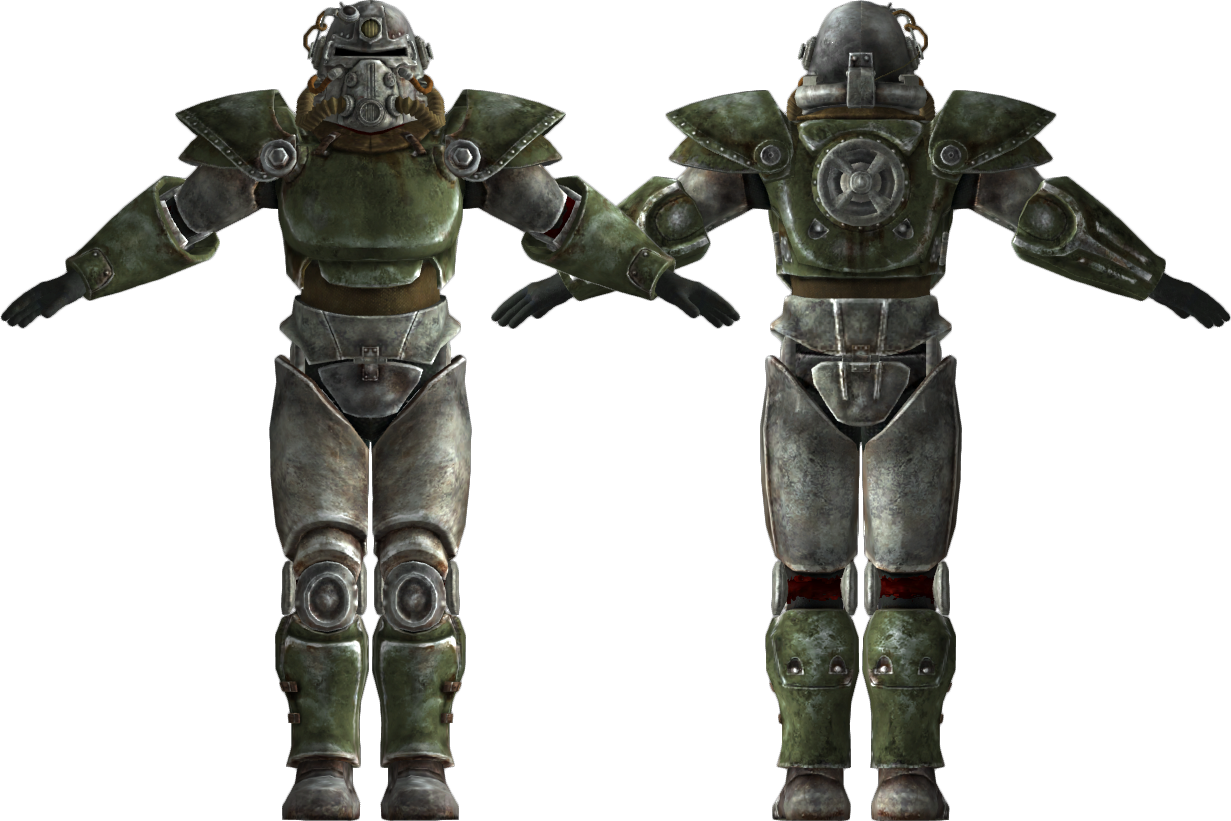 This guide will show you how to get all Power Armors in the intirety of Fallout: New Vegas. This is the T-51B, T-45D, Remnants, and NCR Salvaged.Disclaimer : I made this guide when I was still a little new to New Vegas; there’s a ton of grammatical errors but everything is still factual.

Part 1: NCR Salvaged Power Armor
NOTE: This is the ONLY Power Armor that does not require training.

The ONLY guarnteed find for this armor is in the NCR Ranger Safehouse. You will get the location and a key to it by doing some NCR quests and being at least Liked by the NCR or maybe Idolized.

The other ways your likely to find one is at NCR places. NCR Heavy Troopers wear this armor. I have seen some at Camp McCarren, Camp Forlon Hope, and the 45 Trading station.

Overall getting this armor comes down to killing for or being liked by the NCR.

Half the Power Armors in the game can be found when siding with The Brotherhood Of Steel. There is one other place you can get a T-45D but Im not even going to bother looking up which Deathclaw nest its in. Yes Deathclaw nest, do you see now?

Anyway, you need to first to be far enough in any main quest line, have 100 Lockpick, or have the Compainion Veronica with you, also found at the Previously mention 45 Trading Post. Getting Veronica is important if you don’t have 50 Speech the reason why will be later explained.

Then go to Hidden Valley it is near NCRCF theres not much else I can do to describe its Location. Go look it up on the Fallout Wiki.

Go look around in some of the Bunkers, one holds The Brotherhood Of Steel Mojave Chapter. If you’re far enough in any main questline, The door will automaticly open. If you have 100 lockpicking Pick open the door, or if you have Veronica she will activate the Intercom.

If you don’t have Veronica you will have to either Kill or Convince (50 Speech) a NCR Ranger to leave.

Do the first quest Elder McManarra ask you to do. When you find the patrols take their T-51B Suits. NO! Your not wearing these. These will disguise you as a Brotherhood member. Use each suit to repair another.

After that quest is done wait 48 Hours and talk to the Elder again. Do his quest and keep doing his quests. Eventully you will be made a Knight and get training and a T-45D Suit.

Edit: I’ve found a much easier and efficent way to get a Higher-Quality T-45D. Inside in Hidden Valley Bunker, If you go to the Armory/Range, Crouch and pickpocket in Knight running the Armory. She will have a Depot Key.

Take the Depot Key, Because Keys are small, you don’t need a very high Sneak skill and you can take it while detected.

Go under the grate floor, using the staircase outside of the Armory. Go under the armory’s grate floor, use the Key to get under the Supply Shack’s Floor. There you are inside of the supply shack, Pick up some T-45D that’s on a shelf (Press Z) and bring it into a place where you can steal it without getting caught.

These T-45’s are much better in quality, They’re almost at the max. You can use another T-45D From there to get it at it’s max quality.

This part must be continuied upon from Part 2. Do that before doing this one.

Remember when you became a Brotherhood Knight? you were also given a key to a Safehouse. Go there.

Inside the safehouse there is a set of T-51B Plain armor. No Brotherhood disguise.

But its in horrible condition! Remeber that Brotherhood T-51b? use it to repair this set.

If its still in bad condition go talk to the Brotherhood guy in the Safehouse. He can repair it, but it can be a large 5000-1000 Caps depending on your Repair skill when you repaired the T-51B.

NOTE: To get the Gannon Family Armor you need 80 Speech.
To even start the quest you need:

1: Be far enough in the main questline
2: have Arcade Gannon as a Compainion
3: Have some minor trust from Arcade

Arcade can be found at the Follower’s Fort in Freeside. For him to Trust you, the easy way is to bring him to The Fort, tell him you just want to see want Ceaser is like and then just leave. Then agree with him you leave The Fort.

After you’ve done that and are far enough in the main questline Arcade might talk to you and start the quest (For Auld Long Sing) May of spelled a few things wrong there.

Find all the Remnants and go to the Bunker. if you don’t have 80 Speech you will have to kill Orion If you do you need to loot it off him. If you don’t kill him One of the Remnants will give you their armor and teach you Training. You will still get training if you killed Orion.

Now if you want the Gannon Family Armor you need to tell Arcade to go back to Freeside with a 80 Speech check.