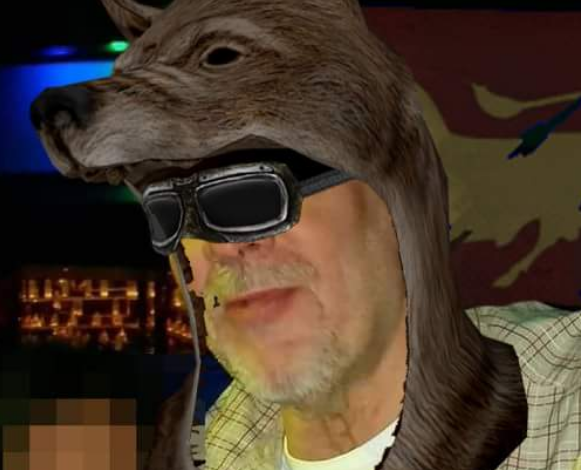 This guide will teach you how to get into New Vegas (from my experince) in under hour! If you know any ways to make this route better (excluding complex glitches most players cannot do), please comment it!

The image below show the basic route from Goodsprings to the Strip and should serve as a basic refrence for anyone attempting to take this route. If you are confused on anything in the map then check the description of how to get there in the text description below. 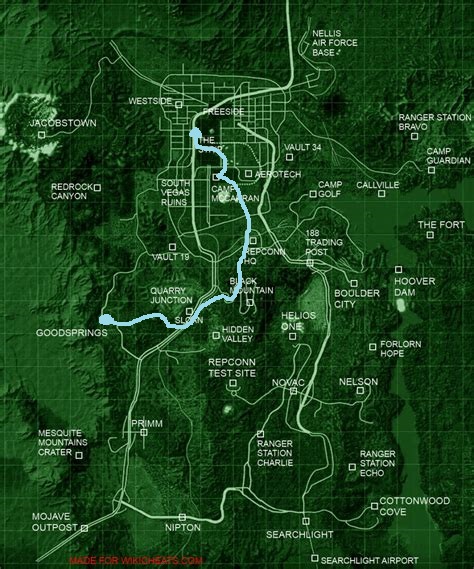 After leaving Goodsprings at the start of the game head towards the town of Sloan to the North.Although you can take the main road to get there, I suggest going from Yangtzee Memorial to the place with all the Radscorpians. If you choose to go in the Radscorpian ditch, then stay to the right and next to the hill as if you were going to go into Quarry Junction.

Once you make it to Sloan and get the warning about the deathclaws, head up towards Neil’s Shack. Once your done talking to Neil, start walking up the road to Black Mountain. When you get a chance go to the NCR Ranger station, take it.

The easiest way to get to the ranger station is by, taking a left and going through a small passage to your left once you get near the first checkpoint. But be warned, these passages are booby trapped with bear traps and falling boulders. Sometimes while walking to Black Mountain, you’ll discover the location way before you’re supposed to. If you do discover Black Mountain early, then fast travel there. After loading in, run down the northern side of the mountain and go straight to Repconn HQ.

Once you get to the Ranger safehouse start to walk towards the Repconn HQ, it should look like a big office building, or the 188 Trading post is quite close, so if you want to get as a compainion Veronica you can just take a little detour.

Once you’re at the Repconn HQ, go to Camp MacCarran. Once at MacCarran, go in the building and board the train. I’ve never staight up boarded the train so this may not work, if it doesn’t (stealth) kill the soldier gaurding the gate and put on his uniform you can get on the train because they think you are a soilder.

Great Job! You’ve made it to New Vegas without paying a cap! Speaking of caps, you don’t really have anything to gamble with. If you want to get easy money on the strip then sell all useless items to the street vendor infrount of the NCR railway station or the arms dealer hiding out next to Gamaroa.

If you are already in the middle of a game and want to make it into the strip for free (without going through McCarran) there is another way.

When you first get to the Strip North Gate in Freeside, it seems like the only way to get in is by paying 1000 to the suceritrons for a passport or 500 to Mick for a fake. Usally when you try to run into the strip the Sucritrons will start attacking you. But the very first time when you go to the Strip North gate, a Squatter attempts to run into the strip, but gets gunned down by the Sucritrons. If you run in with the squatter then you won’t get shot at because all the sucritrons are focusing on the squatter.

If this event has already happened then you can just kill one (or all of) the sucritrons on gaurd. It’s not like your Karma on the strip effects anything at all unless you’re doing a house run for some reason.