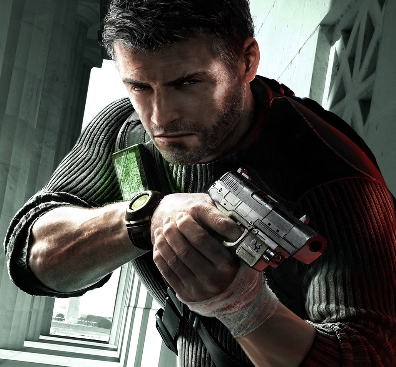 How to know many ins and outs of the game’s AI, and tactics to use on the way to mastering Realistic Difficulty.

So you want to master this game, huh? After all, it is rather fun. When i say master though, i don’t mean the basic “I know how to play the game”, I mean, knowing tips and tricks on AI behavior and map tactics, how to stay hidden, and other things that are important to know about this game.

I cannot promise you a 100% in depth description of every facet of the game’s AI, what a guard’s favorite food is, why almost every guard has the exact same voice, and how many swear words the average enemy inserts into his daily vocabulary in this game, but i can tell you some tactics that will at least send you on your way to beating Deniable Ops and such on Realistic Difficulty with ease. All it takes is a significant amount of patience and some prior experience with stealth. 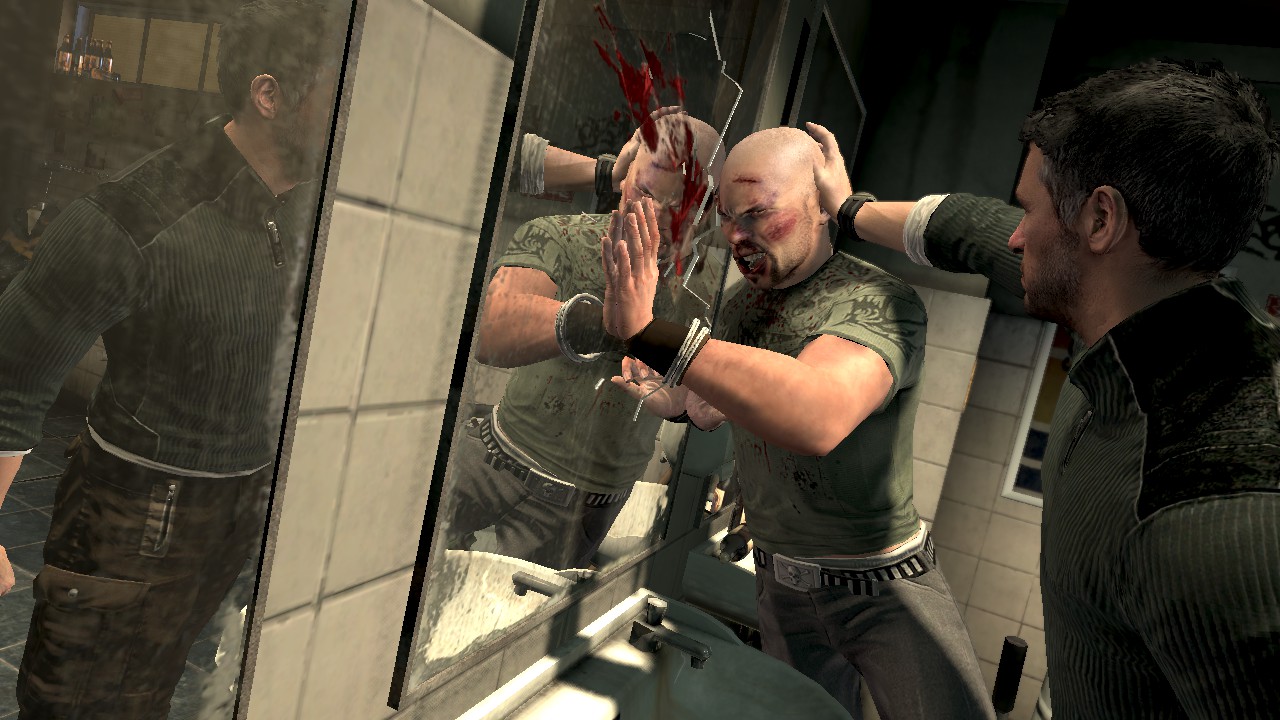 First, before continuing on, I would highly recommend completing Sam’s campaign on an easier difficulty to get comfortable with the controls of the game. You will benefit more from this guide that way.

Artificial Intelligence. The quality of it varies from game to game, sometimes it can be outright stupid, but in games like this it isn’t necessarily stupid, in fact in this game it is well crafted. However, It’s still very predictable, exactly how i’m sure mercenaries who scream insults at you every eight seconds while trying to find you would be in real life. As such, you can use that fact to your advantage. 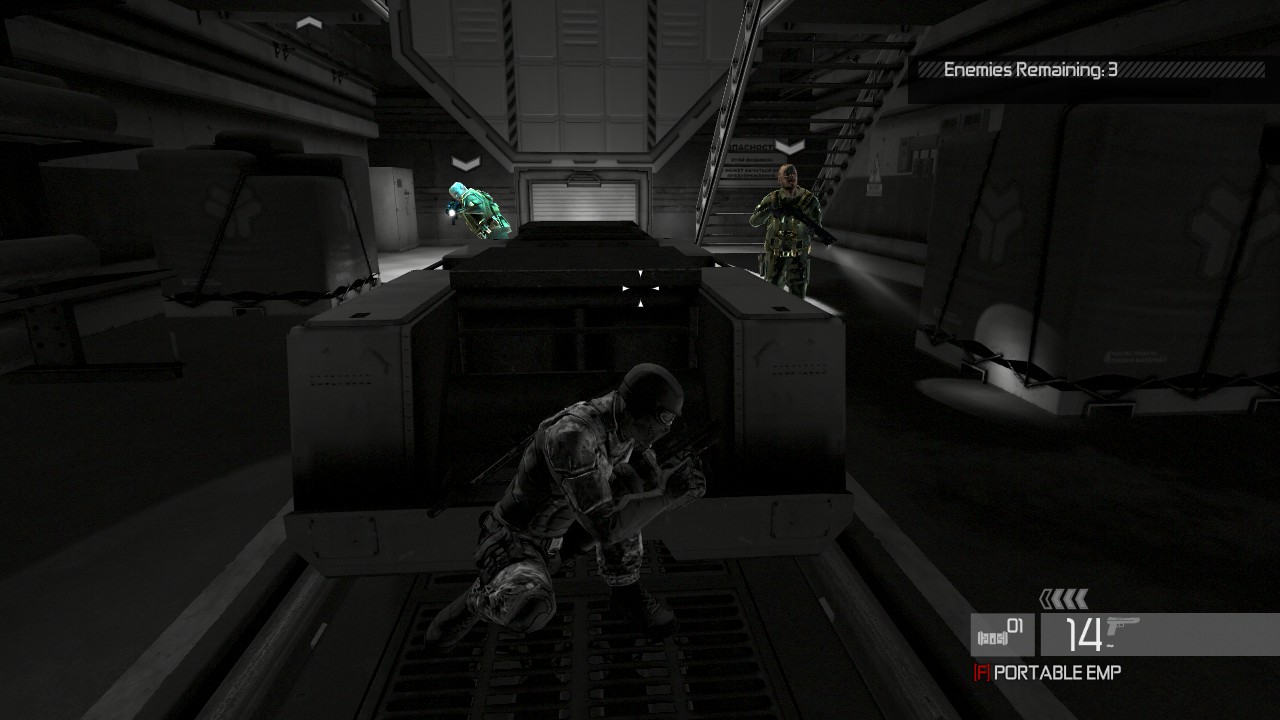 As you start a mission, of course, nobody knows you are there. If you don’t screw up and alert enough people to your presence, nobody would suspect a thing if one of their friends mysteriously disappears. Who knows, they probably went out for a smoke break or to the bathroom. They don’t care, they just want to get their shift over with.

During this phase of the AI, they have set paths that they will patrol. You’d do wise to spend at least a good 3-10 minutes observing them from a hiding place if you plan to go a no detection run. If you are detected, however, they disconnect from their patrol routes and they will just try and look for you on a more convenient and more focused set of path rules in order to hunt you down. This is why you’re going to want to mark as many priority targets closer to you as possible beforehand so you can keep track of them without having to use your sonar. This is also why my personal preference of pistol is the Five-Seven, as you can upgrade that pistol to mark four targets. Fortunately, while this is going on, they will usually be fixated on a more direct path to where they think you are, making it easier to sneak behind them and drag them into the shadows. Unfortunately, during a search phase, it also means everyone will have flashlights on, meaning that of course they can see you in the dark If you’re not careful. 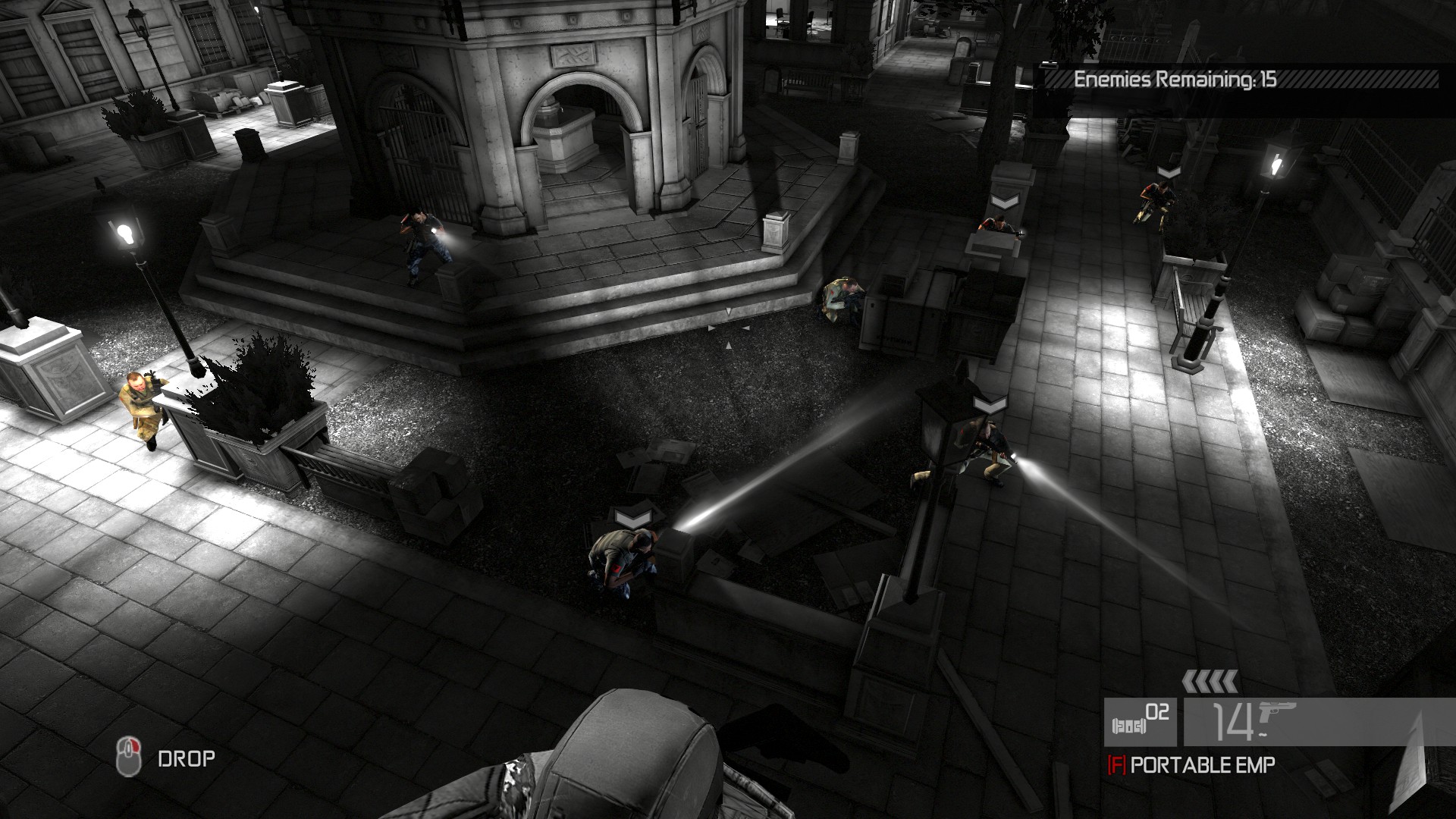 Did you know that New Yorkers never look up? Neither do mercenaries, unless they’re trying to find where a stray bullet came from. During a search or ambush phase, hell, as much as possible even, you’re going to want to do your best to stay off the ground floor. Luckily, every map in Conviction is intricately designed to allow you to do just that, since almost every ledge can be hung off of or climbed, especially the DLC maps which have a LOT of places to climb. You’re going to want to use that to your advantage.

When you have been in the search phase for a while, and a merc finds enough bodies, he will call for backup. If you eliminate enough people in an area where a body is found, They will try and find choke points that are impossible for a ground based person to pass without being turned into swiss cheese by automatic rifles and shotguns. Luckily, if you’ve been following this guide, being ground based just isn’t your style, so you’re in luck! Find a place to flank ambushers and pull them out of the group one by one if possible. A good Conviction player would only fire his weapon if he or she knows they have a good shot, and it’s absolutely 100% necessary to do so. 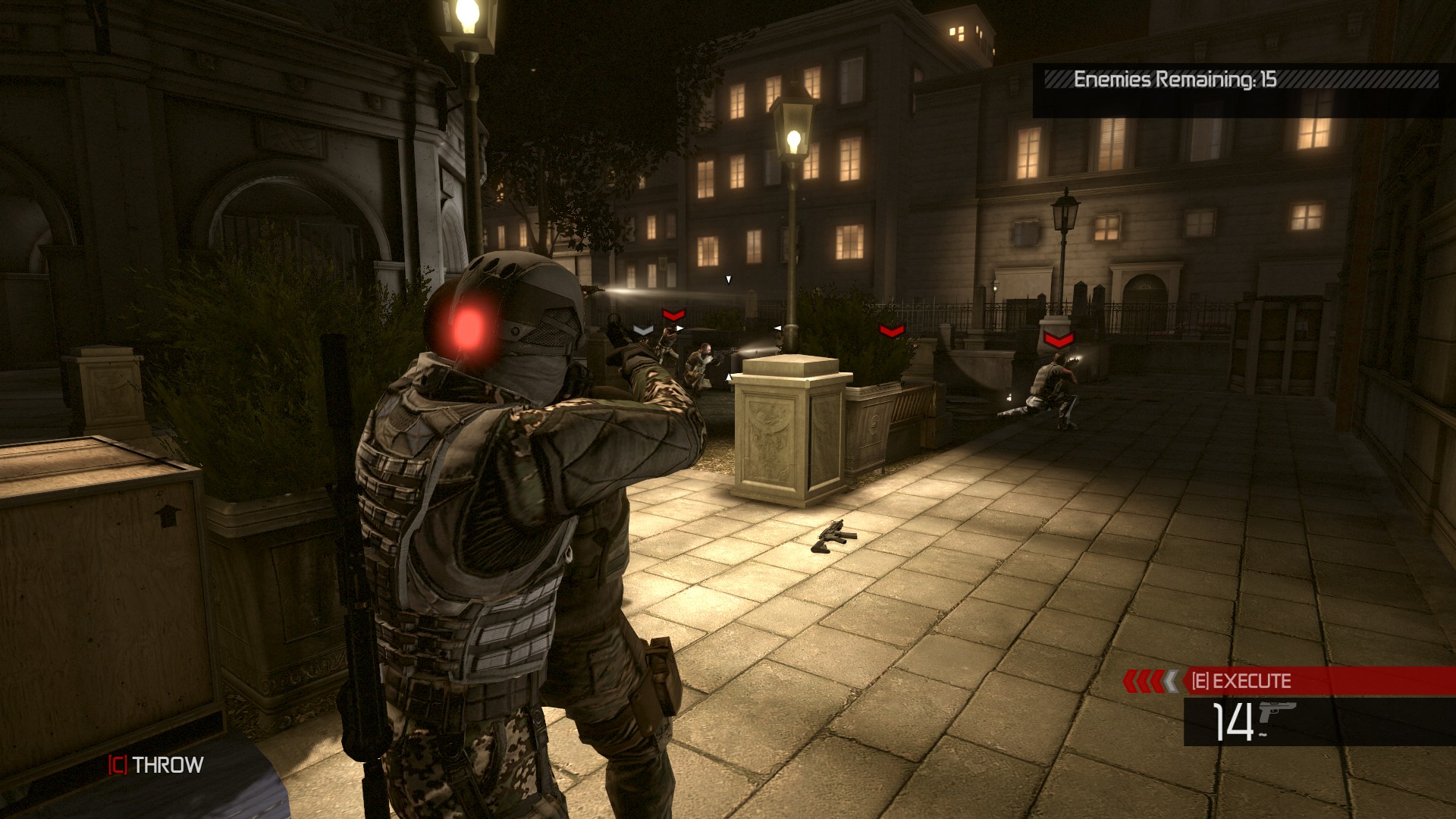 Because you cannot pick up dead bodies in this game (pretty dumb thing to take out in a SPLINTER CELL GAME, but I digress), you have to make do with taking hostages and dragging them into the darkness before disposing of them. Luckily, because of the way that the AI’s vision cones work, this is a relatively simple task, and can sometimes allow for some great risk by popping out into the light for a few seconds to make someone take a permanent “Smoke break”. See above pic for example.

The last 2 parts made the mercenaries sound really clumsy right? I’m convinced that’s by design, because here’s where i really have to give a shout out to the AI programmers.

The vision cones in this game are built in such a way that is 90% accurate to the way actual human vision works. The vision cones are not solid, they are distance and position based, meaning you can be inside a vision cone but being on the edge of one won’t allow them to spot you as quickly as if you were in the center of one.

See this blueprint I threw together in photoshop to give you a semi-accurate depiction of the way vision cones work in this game: 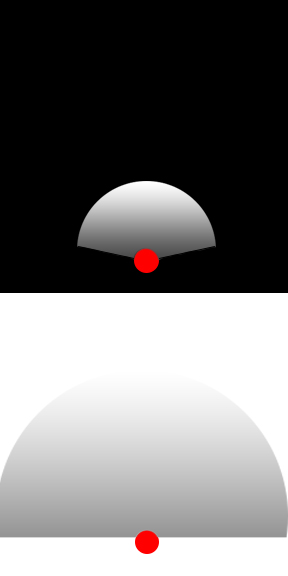 If you are in the peripheral vision of the vision cone but closer to an enemy, they would focus on you at the same rate as if you were on the edge of the front center.

On a personal note, i’m really impressed by this and the only two other games i’ve seen that use this kind of vision cone are Hitman: Absolution and Far Cry 3. More stealth games need this kind of AI.

Ah, gadgets. You’re not a splinter cell operative without them. Doesn’t mean you need to use them at all once you master the game, but they can be helpful.

This one is self explanatory, but for the purposes of this guide I will explain it in the best detail I can.

Your sonar sends a wave of sound that penetrates walls and shows targets on the other end of walls. I recommend only using this when tracking your marked targets isn’t enough, because it inhibits your ability to see security cam FoVs and flashlights. However, when you hear the mercenary scream his 1112th insult at you in a vain attempt at trying to bait you to come out in a worryingly close proximity, sometimes you won’t be able to see him. This is the only time you would ever even need sonar, as the rest of your character’s instictual cues clue you in on the rest. Of course, you also need it to see lasers, but i’m talking about general gameplay here. Here’s what you’re going to want to use it often for in infiltration mode:

Yeah, pretty nifty for overkill on lasers like that, i know.

For infiltration mode, practice everything you know about the AI until you know how to defeat them down to a science. 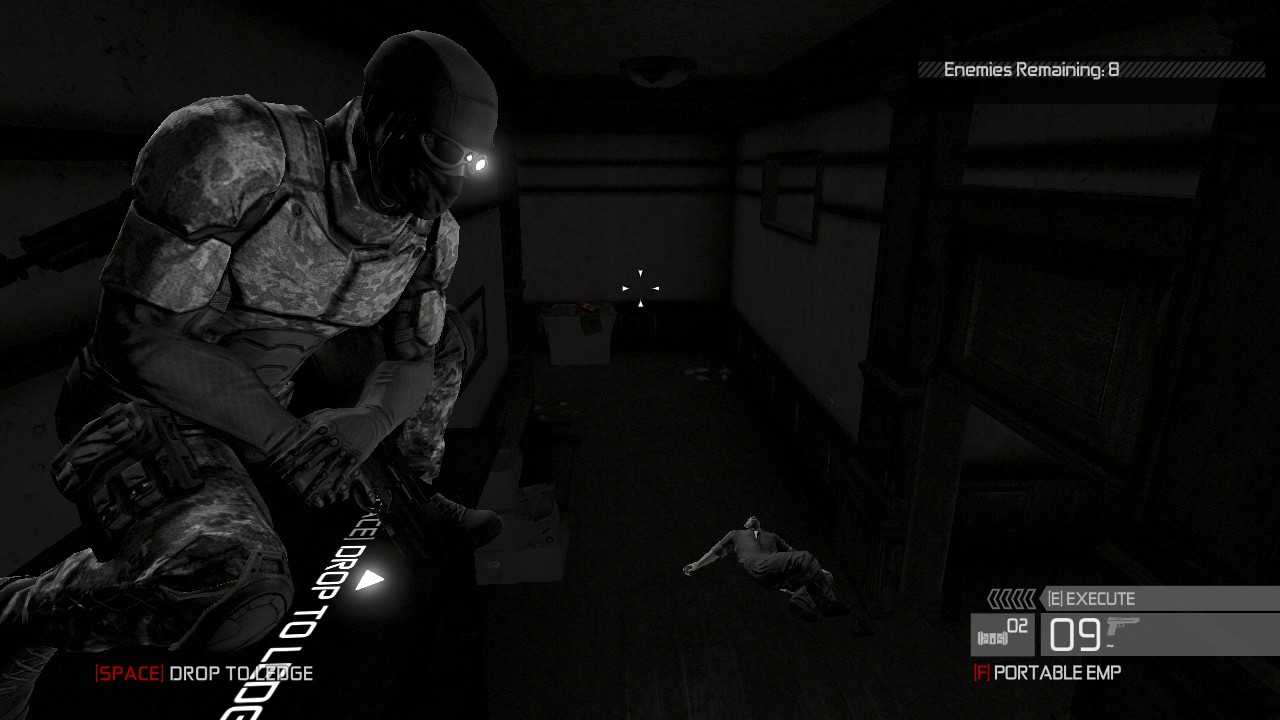 Color Desaturation. If your game isn’t mostly in black and white, you’re playing the game wrong. You really want to stay in the shadows, because on difficulties like realistic difficulty, the game won’t give you the leeway to do stuff like this:

No. Instead of walking through like a badass, “Realism” on realistic difficulty is going to hit you with a ton of bullets faster than you can say “I could have had a V8”. So, as such, stay in the shadows. 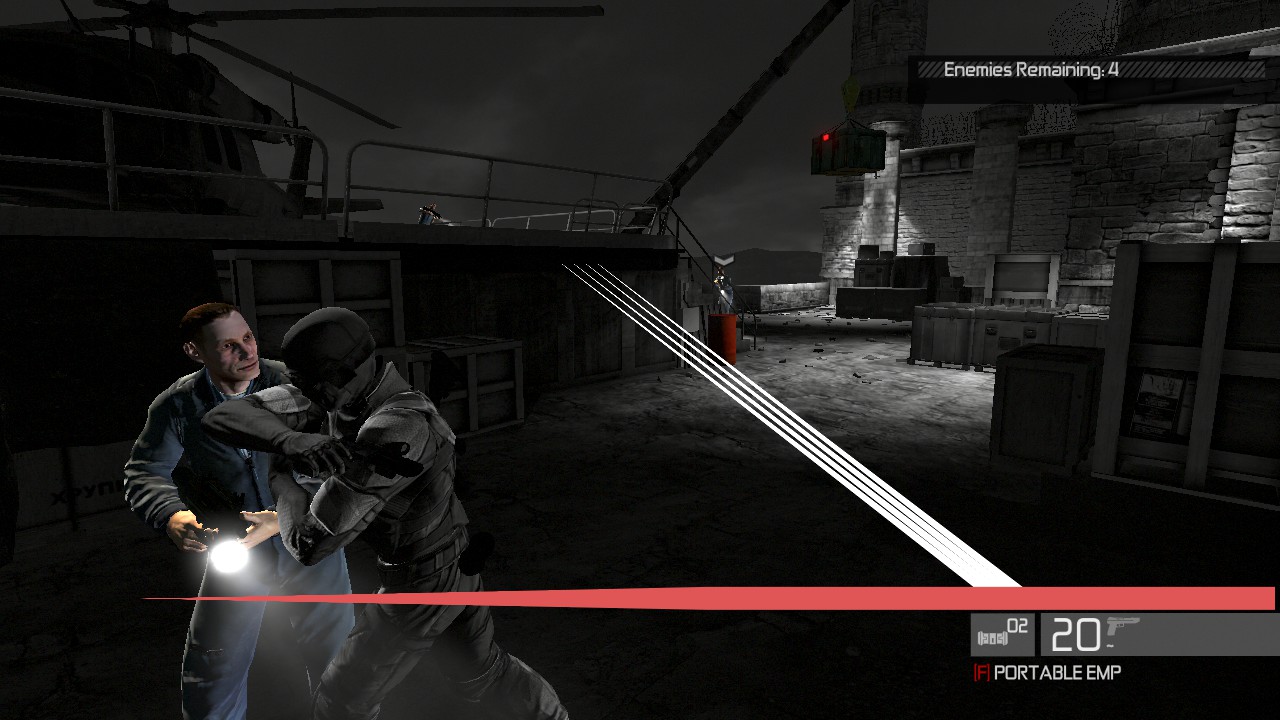 First you’re going to want to find a target and take him out with a hand to hand kill. Duh. But here’s what you probably didn’t know mark and execute was good for: Keeping track of targets.

As you enter an area, mark as many enemies close enough to you to be a problem as you can. The weapon loadout i recommend for this is the Five-Seven and a silenced M4A1. Don’t ever upgrade the M4A1 to have an upgraded scope, it makes it extremely hard to aim in comparison to having it without that. As i said in “Understanding the AI”, the Five-Seven is good for marking four targets and it’s huge damage output disadvantage is nullified because you’re going to want to be going for one hit kill headshots anyway.

Here’s something you probably didn’t know, while pointing at a body of a living mercenary, your crosshair turns red. Duh. But what you didn’t know is that when you zoom in as your crosshair is red, it autoaims to his head. I don’t have any fancy screenshots to showcase this yet, but take my word for it. Unfortunately, once it locks to his head the game relies on you to track him on your own. Which means this feature is essentially useless if a guard is walking in a direction. I rarely find myself using it, but it is good for mercs who are standing still.

Thank you for taking the time to read my guide. I spent around 4 hours working on it and i hope it helps you along the way of this fantastic game. Enjoy, and happy stealthing.