This guide describes in detail how to abuse the gun runners to your advantage.

NOTE: A TL;DR version is at the bottom of this guide.

Several requirements are needed in order to maximize the effectivness of this cap farm. These requirements are not absolutely crucial to have but they will make this event go by much smoother. Those requirments include:
– A lockpick skill of 50 (average)
– Above average weapon
– Good sneak
– Good barter
– Stealth Boy

Step 1: Make your way to the gun runners

This whole farming scenario will take place at the gun runners. The gun runners location is shown in the following picture. 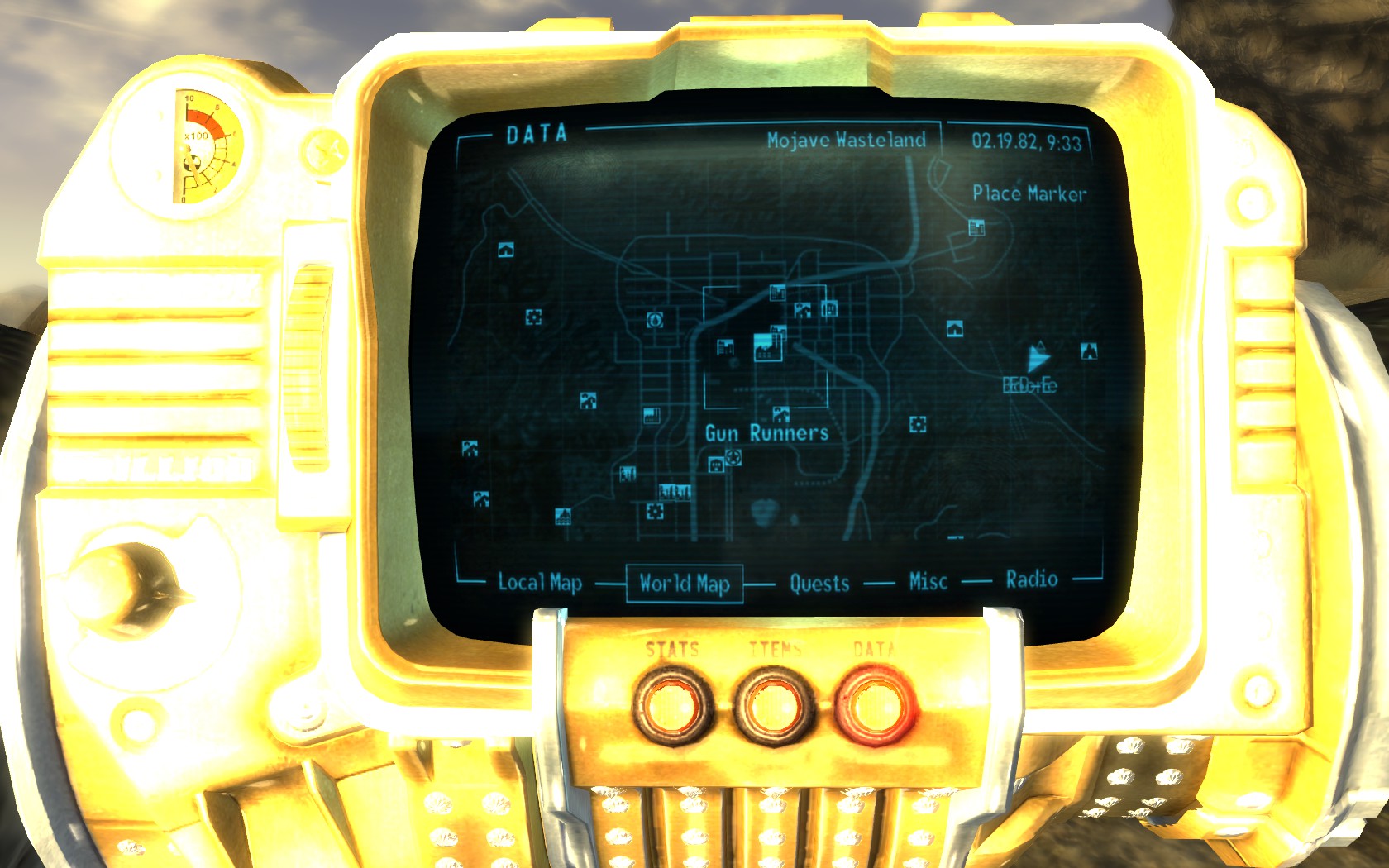 Make your way to their location. You will find the gun runners vendor outside along with a NPC. Inside the perimiter will be two gun runner guards patrolling the area.

To the left of the vendor is a locked gate. To get inside, you need to have a lockpick of 50. Pick the lock, and get ready for the next step.

If you do not have a lockpick of 50, read about what you should do in the next step.

IMPORTANT NOTE: If you have any companions, it might be wise for you to hide them away in another location first, as what you will be doing in the next steps might make the NPC outside the vendor hostile, and he is crucial for a quest. If your companion sees him, he may wander off and attack him, rendering the quest incomplete.

Those guards I mentioned is how you will execute phase one of the farming. After you lockpick the gate, the goal is to take down the two gun runner guards. Sneak behind each guard and execute them in your way. Due to their powerful combat armor and helmet, they can take quite a beating if you do not have the proper guns.

If you do not have the required lockpick of 50, a way to get past this is to shoot the guard outside the fence. The guard will open the gate and will chase you. Keep in mind that doing this will make the NPC near the vendor hostile if he is present.

Once you have took both guards down, if you have enough space, take all of the equipment the two guards have. The main items of importance are the Combat Armor, Combat Helmet, and the Hunting Rifle.

If you took both guards down and you do not have enough space for the three items, carry both guards outside the entrance of the gun runners facility. Leave them there.

Important note: If the weapon you use to execute the gun runners is NOT silenced (such as the Anti Materiel Rifle without mods), any remaining gun runner guards and the NPC near the vendor will become hostile for a brief moment. Once this happens, quietly sit back until both stop being hostile. Once the other guard is not hostile, he/she will continue along their programmed route.

ENTERING FOR THE FIRST TIME: On the left side of the building will be several guard runner guards stationed. In front of you will be the gun runners workshop. There are several high quality goodies to be looted from the workshop so make sure you stop by there. Proceed to take down all the guard runners stationed in the left side of the building. This can be a tough task so a stealth boy + a good weapon is reccomended. Otherwise you can bring in a couple of companions to help you out.

If you have enough space after you take the gun runners down, again, loot the Combat Armor, Combat Helmet, and Hunting Rifle. Otherwise, drag the bodies with those items near the exit of the building.

ENTERING AFTER THE FIRST TIME: There will not be a mass group of gun runner guards now, but rather just one facing the lockers where the mass group spawned originally. Sneak up behind the guard, execute, and drag or loot right away.

This step assumes you are still inside.

After you get outside, if you dragged the two guards near the entrance, loot for the same three items once more from the both of them. Once you have all the Combat Armors, Combat Helmets, and Hunting Rifles collected, make your way to the gun runner vendor located quite comfortably outside of the gates.

Initiate normal conversation and make your way to the store screen. In your inventory, locate all the Combat Armors, Combat Helmets, and Hunting Rifles and sell them to the vendor. 6000-8000 caps every time!

Now that you feel richer, make your way to a bed.

Now that they are back, do the same thing all over again!

Get to the gun runners. Lockpick the gate, and kill the two guards. Get inside and kill all guards. Loot guards for Combat Armor, Combat Helmet, and Hunting Rifle. Sell to vendor. Sleep 3 days. Repeat.