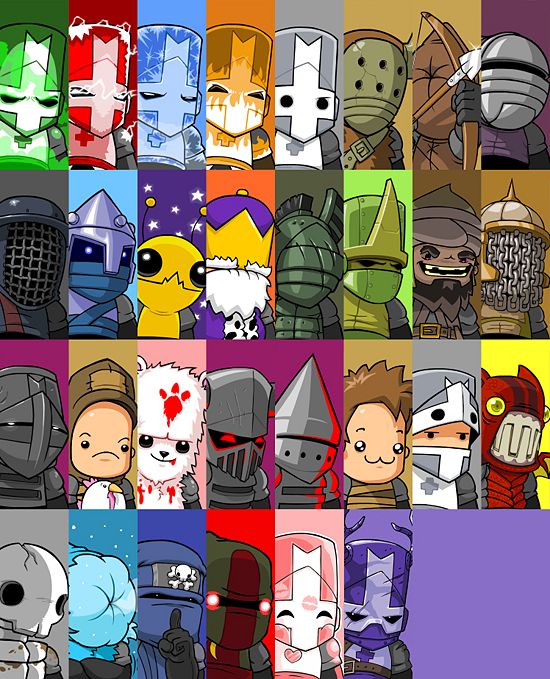 This guide tells you how to unlock all playable characters for the game Castle Crashers.

Green Knight: A knight with the power to control the element of poison.
Red Knight: A knight with the power to control the element of electricity.
Blue Knight: A knight with the power to control the element of ice.
Orange Knight: A knight with the power to control the element of fire.
Gray Knight: One of the brave and loyal knights of the King.
Barbarian: An uncivilized enemy that lives for raiding and pillaging.
Thief: An agile enemy with a bow and arrow; he lives up to his name by stealing gold and food.
Fencer: A minion of the Industrial Prince.
Killer Beekeeper: Keeper of the killer bees in Flowery Field.
Industrialist: A worker at the Industrial Castle.
Alien: An extraterrestrial who bears an uncanny resemblance to Alien Hominid.
Brute: A mighty warrior of the forest.
Snakey: A knight protector of the Flooded Temple and Marsh.
Saracen: An enemy soldier from the Desert.
Royal Guard: A guardian of the Sand Castle.
Stove Face: An elite, heavily armored black knight that guards the path to Snow World.
Peasant: A loyal subject of the King.
Bear: A member of a feral tribe of white bears.
Conehead: A knight of the Conehead Groom and Cyclops.
Civilian: A townsperson living at Home Castle.
Fire Demon: An evil guardian of Lava World.
Skeleton: An undead enemy reanimated by the Necromancer.
Iceskimo: An enemy who guards the way to the Ice Castle.
Ninjer: A ninja that ambushes other ships at sea. He rides on a pirate ship
Pink Knight: A knight that spreads peace and joy throughout the land (while crashing castles).
Blacksmith: A knight that was hidden in the shadows of mystery.
Hatty hattington: A character from the popular game Battle Block Theater also made by behemoth!

Available in Legend of the Blacksmith DLC
Blacksmith

Beat these levels on insane to unlock the characters listed

Complete these arena`s to unlock the characters listed

Beat this level to unlock The characters listed