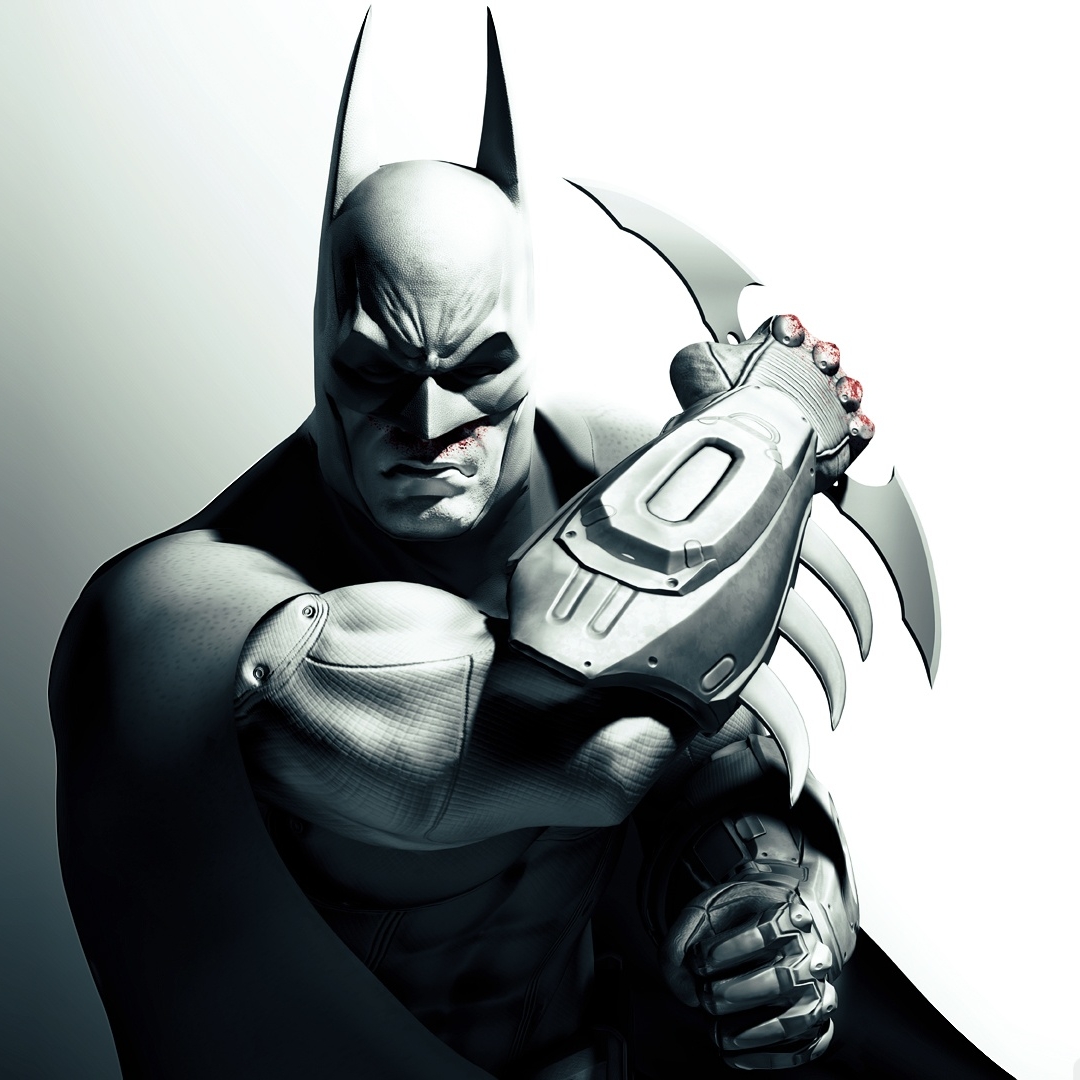 It can be overwhelming to learn and master all the attack options in Arkham City, even for those who have played plenty of Asylum (like me). After some experimentation, I recommend these keybindings to help you control combat with a bit more ease.You’re still going to need a lot of practice. There’s 17 base attacks, but variations for all of them. There are already a handful of guides out there that go into detail about Perfect Freeflow 2.0, but I wanted to chip in anyway.Obviously, this is for keyboards not game pads. The game plays just fine on a keyboard, not all of us need to rely on our thumbs so much. =P

To rebind actions, you’re going to need to start the Launcher: launch the game from Steam –> Configure PC Options –> Settings –> Controls. The in-game Options screen does not allow you to change the Controls, just view them.

I’m keeping the list in relatively the same order as the Launcher. The Launcher Controls menu doesn’t detail every single available action through key combinations like the in-game screen. These are all intended as Primaries only, because I see no reason to have redundent commands. You can assign Secondaries as you see fit, take some of these bindings and leave others, or read over this only to make a snarky comment about controllers which I will promptly delete.

For mouse controls, you have to click inside the box with the name of the input while assigning the control.

Unchanged from the default settings except for Previous / Next Gadget. I don’t think scrolling forward (up) feels like moving left. I swear I have to change this setting on every single game since 2004. Old dog, new tricks. Also, who really selects weapons and things with any of the number keys past 6? No one. Although, this game is the first I’ve seen to have Shift + # up to 6, which would work.

The settings I grandfathered in from Asylum. I think combo keys are more intuitive for “mode types” especially since I don’t want to accidentally hit a single keypress and use up a Freeflow. I really do miss the Throw, it always let me feel the brute strength of Batman, though Disarm and Destroy almost makes up for it as a replacement. There is a Counter sequence now where Bats tosses the thug over him and donkey kicks him ten yards…. pretty damn awesome.

I highly recommend taking advantage of the extra keybind options for one-touch Quickfire. Borrowed these from Asylum as well. Maybe they changed to the double-tap because of the massive number of gadgets now available…. even though that makes no sense because you can only Quickfire the five main gadgets anyway!

These can’t be changed, at least not in the Launcher or in-game. No big deal.

There’s a rumor that “Combo Batarangs” can be used as a Special Takedown without reaching Freeflow Focus, and that these count as another combo variation for scoring, achievement, and XP purposes…

This is not true, for:
This action is from Arkham Asylum, and was replaced by the Freeflow Focus version which DOES NOT count as a combo move on its own. The other Freeflow Focus boosted gadgets also do not count as distinct combo moves. Using Quickfire Gadgets, regular or Freeflow, counts toward x5 Gadget Variation bonus, and that’s it. 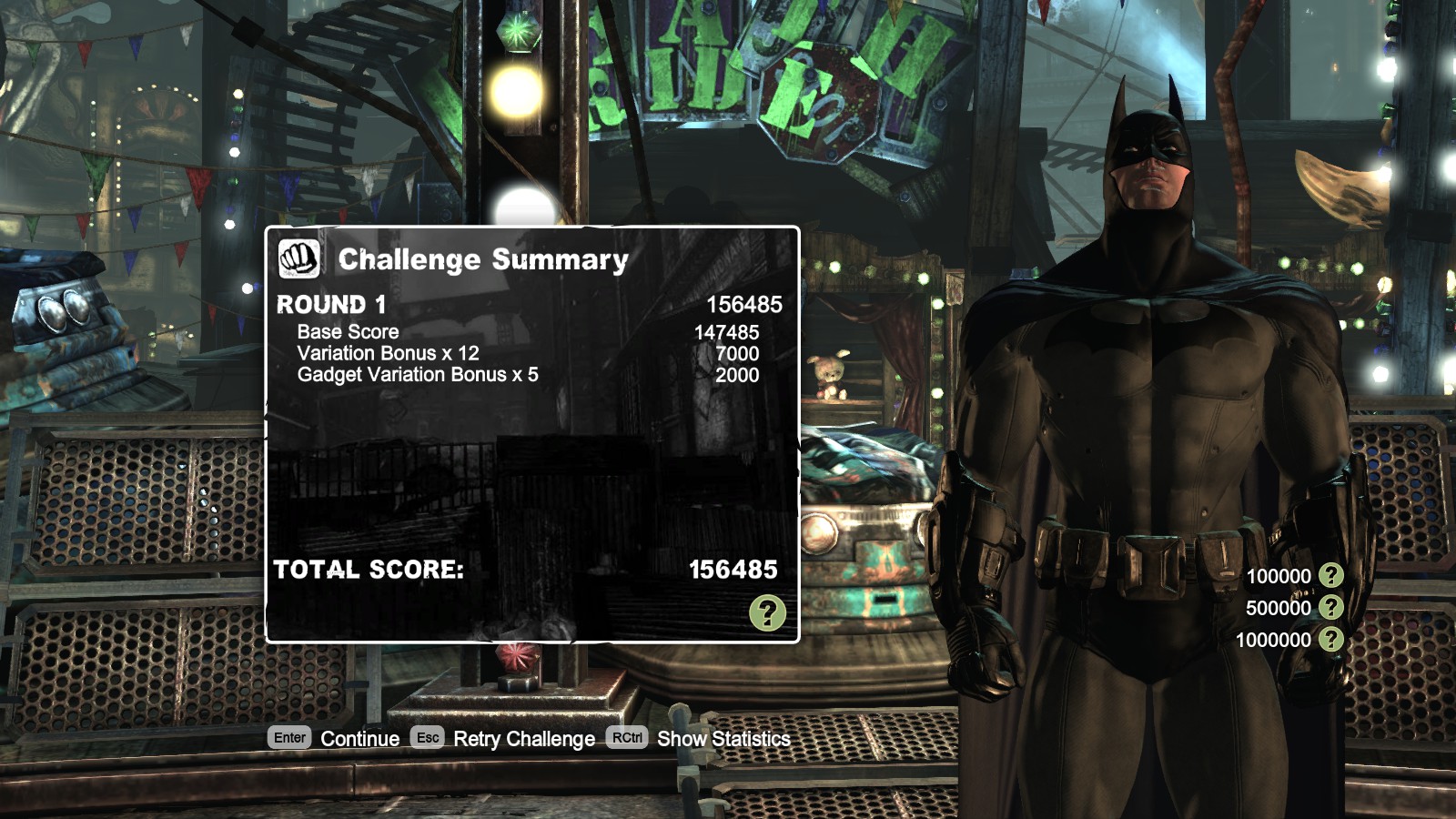 My tactics for easy completion of the achievement and resulting score bonus:

Maps: I’ve been able to complete it in as little as four guys: at least one with a weapon and one with armor. The Extreme Riddlers Challenges are the perfect resource for practice, especially the two DLC neverending ones: The Joker’s Carnival and The Iceberg Lounge VIP Room. The major difference is that the Carnival has a slow build up with the full variety of enemies / weapons and requires that you never get hit to keep playing and extend the timer, whereas the VIP Room is exclusively regular thugs, Armor, and weapons with a larger crowd from beginning to infinity until you’re knocked out / killed. I find the Carnival easier to use for this simply because it begins with a smaller group allowing space and time to complete the slower moves, especially Ground Takedown.

Priority One: Try to always start off with a Batclaw pull n’ punch, since it is stupidly time consuming. Though if you don’t want to: the Bat Swarm creates a decent opportunity to complete slow actions like Aerial, Batclaw, Beatdown, or Ground Takedown. Bat Swarm is very low damage so feel free to use it a lot but remember that Armored and other special enemies do not get stunned easily.

Second: Quickly cycle through all of the low / no damage attacks. You can’t just go through all of them without entering Freeflow, though. We can’t remain in Freeflow, otherwise gadgets become too powerful with limited targets. So use the first two Takedown charges on Disarm / Destroy and Batswarm. If you’re missing Batclaw or Beatdown, Bat Swarm buys time, when in doubt: Batswarm!

Third: Cycle through all your gadgets, but not in Freeflow. It’s best to spread these throughout the fight so you don’t find yourself in a room of mooks on the floor and / or frozen simultaneously. Another option is to reserve one guy to take all the toys in succession. R.E.C. –> Freeze –> Batarang is my favorite cruel combo. Remember that you can, in fact, freeze thugs to the ground when they’re down. Great for keeping armor or weapons out of your way, or save for dessert.

Fourth: Use Takedowns on guys who are too softened up to take another punch. With practice, you should be able to keep track of how much punishment you’ve doled out to each individual thug. Normals can only take the equivalent of three critical hits, ninjas two.

Finale: if you haven’t Ultra Stunned and Groundpounded already, it makes for a nice cherry on top of your can o’ whoopass. Both Ultra Stun and Ground Takedown are slow, so it’s nice to give the last poor bastard standing some extra love. Nothing says “Batman!” like dazzling a guy out of his mind, jumping on him, and smashing his head into pavement…. because Batman doesn’t kill.

In an effort to perfect my playstyle, and help people be more Batman, I will make an attempt at a maximally detailed general combat guide.

I provided some basic insight with the bindings, but here I’ll explain in more entertaining detail.

^^ But you know, when you break a bone, you generally always want to go to the hospital. “Why?!” You ask with completely innocent ignorance. Well, besides setting the bone back into place to heal properly, and getting medicated for the intense amount of pain you’re definitely in, there’s the very real chance for what’s known as “complications”. These are disorders caused as a secondary effect from the initial injuries / disease. So while Batman might try his darnest to not kill directly, while breaking so many limbs in his regular schedule, he’s definitely killing or permanently maiming a lot of people in the long run. That’s even assuming he’s able to manage perfect breaks that they don’t knick arteries for a nice bleed-out right then and there.
/nerdrant