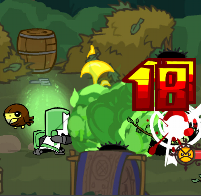 Fastest method of leveling up.

The best place in the game to level grind is the Forest Boss on Insane Mode. He spawns an infinite mob of trolls that you can pound until your fingers get tired. They have no range and no magic, they just hurt if they get close enough to slap you.

Other guides will tell you to keep your strength low to level up faster. The only reason for this advice is that you get xp PER HIT, which means you will level up more PER ENEMY with low strength, which in turn means that if you just play straight through the game, you will be a higher level at the end of it because you have taken longer to beat it. It does not actually level you up faster PER TIME.

In fact, with a never-ending stream of enemies to kill, your strength doesn’t actually affect your level up rate. More strength just means you kill enemies faster, which means you get more food.

My preference is to max Magic, then Agility, then Defense, then Strength, but you can do it however you want. Agility is crucial though. If you get caught in a mob of trolls, they can stun-lock and kill you within a couple seconds.

You’ll want Hawkster with you to collect extra food from enemies, unless you’re good enough to not get hit, in which case, use Giraffey.

I recommend using the Flame Sword, because fire damage does multiple hits over time, gaining you more xp. If you’re using Green Knight, shoot a blast of poison every now and then, for the same reason. Red Knight’s lightning is of course amazing for pure xp quantity.

Air juggling is a must, and if you can get in position to do the X,X,X,Y,Y combo, that can be worth a whole ton of hits.

ALWAYS BE MOVING VERTICALLY. The troll AI is pretty simple, and they can’t hit you if you’re moving up or down. You can safely run diagonally through crowds of trolls.

There’s a chest with chicken in it if you need it, but you might sacrifice some health standing still long enough to get it open. Bring potions with you of course, but if you’re good enough, you shouldn’t need them. Be aware of your xp bar, your health will refill every time you level up.

This video is a pretty poor performance (and it has no sound), but it’s still good enough to survive without using potions. It’s not actually that hard. Read the comments if you want more details.