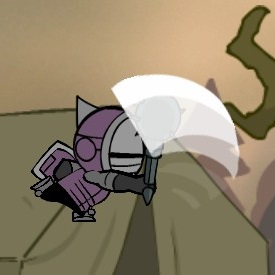 This guide will explain in detail how to use XYY Levitation in Castle Crashers. It will contain a brief text description. This technique is nothing new, and most pros already know how to do it, but it’s very difficult to master, and since it’s critical (pretty much) to completing insane mode, I decided to explain how to do it. I will also list other useful (or less useful) juggle combos.Please by all means list combos you made up yourself in the comments, and I’ll list it in the guide along with your name.

There are some things you need, or are convenient to have in order to master XYY Levitation.

XYY Levitation isn’t impossible to do without the Slow Fall. As its name suggests, the slow fall obviously makes you fall slower, so it becomes much easier to levitate.

Even though it’s hard at first, if you primarily levitate without the slow fall, then you can begin juggling in the middle of it rather than landing, then jumping and starting a juggle which could potentially lead to taking unnecessary damage.

Now that you’ve mastered the slow fall, don’t go like XYYXYYXYYXYYXYYXYYXYYXYYXYYXYY, at lightning speed and crash your game because your computer couldn’t handle button input that fast. Pace yourself when you do it. Just do a nice: RT+A+A+XYY [pause] XYY [pause] XYY [pause] like that. If you go too fast you won’t be able to perform the combo properly anyway, because if you ever go to high, you character will do a flip, which will mess up your combo input EVERY TIME, guaranteed, and possibly also make you fall to the ground if you’re inexperienced with levitation, and falling to the groudn is typically an undesireable result when it comes to levitation.

Note: The pause in between combo inputs isn’t set in stone, but a 1-second pause approximately should be sufficient. Over time you’ll be able to just automatically calculate when you need to do it again, and after that you’ll just levitate without even thinking about it. These results don’t come instantly though, and I guarantee you a good month before you master it, but I also guarantee you that it’s definitely worth it.

You can use the XYY combo with yourself and another player to juggle heavyweight enemies.

I recommend sprinting then pressing Y in front of a group of enemies, then jump as fast as you can and start the combo with your partner. Doing this requires a partner that you have chemistry with, as you’ll really have to be in synch with each other. I could probably make do with anyone, but only because now that I’m going onto my third year of Castle Crashers, I’m a very experienced player, but not everyone is going to be able to just work around a lack of time spent playing the game together.

A shout out to my besties Fromanmd, Shizukana,Drakath, and Teh Sweg

This lets you fly like XYY, only it’s harder to use and master, but in my opinion, it looks cooler than XYY Levitation because you get to do flips instead of twirling your weapon in a fairy pose.
Jump, get some air (using X Y Y or RT+A) and hit XY, then repeat XYX, XYX, XYX, and so on.

There are several things that you should know about juggling.

This combo is definitely a great farming combo. When used at the Troll Mother boss on insane mode with little or no strength, you can accquire some serioly huge amounts of XP. This can also be used anywhere else to infinitely juggle lightweight enemies, but mediumweight, heavyweight, and very heavyweight enemies as well as other players can’t be juggled with this combo. This combo is common among pros and skilled/experienced players, but 65% of the time, the people you’re playing with won’t know about it.

This is an excellent juggle starter for PvP, and medium weight enemies. Simply use XXYY + XYY + XYY + XY + XY + XY + XY — an 18-hit combo. Note that the XY’s should all be side slashes and uppercuts all the way down to the ground. If you do anything else, then you’re putting the combo in at the wrong speed.

This is also the same as XXXXYY, or XXXXXXYY, or any even amount of X’s with two Y’s.

This combo is useful for farming level 99’s as a low level character who’s at 8 or higher. The AA portion (with little or no strength) does one damage twice, so it’s very economical. The full combo is YY + XYY + XYXAA + XYXAA + XYXAA + XYXAA + XYXAA. It’s best use is for juggling medium weight enemies with more total hits per juggle (only on medium/player weights) than any other known juggle combo; it’s the ONLY 30-hit combo I’ve ever used.

This is also currently the ONLY juggle combo that can successfully juggle Necromancer[castlecrashers.wikia.com]

I’m not sure about this myself, but according to Shizukana…

THIS IS NOT AN ACTUAL JUGGLE COMBO. IT’S ONLY A FORM OF SEMI-JUGGLING. The reason for this is because it’s terribly inefficient and it’s unreliable. Also, if you didn’t know, semi-juggling is code-words for “a convenient way to steal or ruin juggles and screw your entire team over.”

Since the combo doesn’t sustain itself unless you use it against a wall, enemies just pop out behind you because you have to keep moving non-stop; this is the ONLY form of “juggling” that doesn’t sustain itself, and it’s also the only form of juggling that doesn’t benefit from raising agility; it in fact becomes less effective with higher levels of agility, because since you have to move forward constantly, you’ll move to far and lose half of the enemies if not all of them.

As unfortunate as it is, this is the most commonly used combo.

Thanks for reading! Please, Rate Comment, and add to Favorites!

Brute: I’m not dead yet!
Fencer: *Continues Headbanging*
Brute: What we have here, is a failure to communicate.