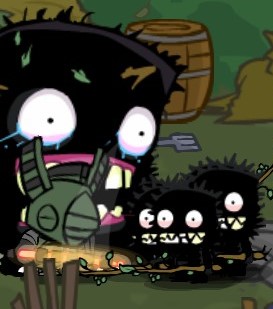 This guide goes over how to stop your HP bar from hitting zero in Insane Mode. It will go over predicting enemy movements, some defensive tactics you can try out, and other tricks you can use to avoid death.

I like to read guides that tell me about stuff I already know. Sometimes I pick up something new, sometimes I learn nothing, and sometimes I get to watch some really good comment fights. I’ve yet to find a guide that tells players what they should do to make the best of their HP, however. So here we are. I’m going to do my best to talk about…

Wait, so where’s the juggling I was promised?

Pretty much anything related to offense is going to get left out. I strongly reccomend you go look up guides on juggling if you don’t understand it, since offense is the best defense in this game. Everything I’m going to talk about is supposed to be used either at the same time as offense, or when you get backed into a corner and offense is no longer an option.

Ittrix, I don’t want to read all of this

That’s understandable. You might not care that it’s possible to block bombs, want to see my stupid haiku about red potions, or plan to understand the science behind a double rainbow. Luckily for you, not everything in this guide is super important! If you want to get the short and sweet version, I advise you to only look at…

Everything else is either a small nitpick I have, extremely situational, or something a better, far less nerdy guide will teach you. With this information, lets begin!

A big part of defense is understanding what the enemy is likely to do. From the little things, like knowing thieves will shoot arrows at you, to the big stuff, like knowing what a standard enemy formation looks like.

It’s not easy to see with the enemy running seemingly willy nilly around the screen, but each enemy is going to have a very distinct movement pattern on the screen that can be easy to identify. The enemy will either…

Each of these positions can only have one enemy in them at a time. These enemies will also move to attack you if you stun any of their allies by attacking them or juggling them. Once these three positions are filled, any extra enemies will zig-zag around the screen in a diagonal pattern, only attacking you when they’re at the same level as you and either in bow range, magic range, or melee range. Sometimes, the enemies will switch their positions. This can happen at a random interval. It’ll also always happen whenever you kill an enemy in one of the three main positions. In multiplayer, the enemies will make a formation around each player.

Ittrix, the Enemy Is Glowing

Suprise! Some enemies can use magic! They don’t advertise their projectile magic on the ground, but you can tell when they’re going to release a splash attack or a magic jump paired with a projectile. Whenever an enemy is about to use a splash attack or a magic jump, they’ll gain an aura around them, just like you do when you’re pressing the magic button. If you see this, you can act more careful while attacking them.

How Enemies Get Up

After you’ve knocked an enemy down, there’s a few different ways they can get up. They’ll either…

Why is that important? The enemy will often attack you the moment they get up, if they can. Since most of the time they just get up where they fell, you can jump into the air and start juggling them when they get up. However, you can’t be caught completely off guard if they roll and attack.

The Enemy I was Hitting Just Stopped Flinching and Slapped Me!

Enemies will only get stunned from normal hits on the ground for a set amount before they’ll swing back at you. This counter gets reset after a period of time, or when they get knocked down. This little counter is pretty much the reason why juggling exists, since if it didn’t we’d all just stunlock on the ground.

When to use a Red Potion

If you’ve only ever played multiplayer, you’re probably best friends with the red potion. You buy five at the store, then go on your merry way and forget about them. Solo players have a big set of problems with the wondrous red potion, however. It isn’t used automatically when your HP drops to zero. Playing through a level becomes a constant painful decision. Do you risk death and hold off until you find some food or level up? Or do you use one of your five valuable red potions? I see you multiplayer people leaving! This information is important for you all too! Why?
Because if you’re the last player standing in a multiplayer match, your red potions also won’t auto-heal you.

When to use a Red Potion

So, when do you use a red potion? As a general rule of thumb, you need to be watching your HP bar the moment it’s at half health. You should generally use it if you get into a bad situation, or whenever you know you can only take two more hits, but a large part of it is still up to the player. Having only two hits left with one red potion when you KNOW there’s meat up ahead or a level just around the corner might change whether you use the red potion or not.

When an enemy tries to attack you, there are four things you can do. You can either hit him first, block, jump, or step out of the way. There’s no perfect set of rules for deciding which to do, but I can try my darndest to give out a general rule of thumb.

This is the recomended option, almost all of the time. But if the enemy has already started his magic or a melee attack, it’s not an available option. If you mess up a juggle and land, you’re often frozen for a moment- just long enough that this is no longer an option.

I personally love this one. Blocking raises your shield, which halts all damage you might have received from an attack. Out of everything you can do, blocking is by far the quickest action. However, blocking isn’t impervious. You can get stunlocked by a large group of enemies while blocking. Blocking may also not work if you aren’t facing into the attack, depending on what the attack is. Lastly, splash magic and jumping magic, along with some attacks from beefy enemies simply can’t be blocked. It’s worth noting that if you time your block very well against a melee attack, you’ll bump the enemy back.

This is another thing I love to do. This is the simple action of changing what level you’re on by moving up or down. It should usually be used while predicting what the enemy is going to do. If you run into one of the zigzagging enemies in a group, you should know he’s going to swing his sword at you. moving up or down until his swing is over, is the bread and butter of not getting hit. If you have magic maxed out, sidestepping while doing a magic jump will get you out of almost any bad situation.

Ittrix, isn’t this just another version of sidestepping? Nope! Jumping is slower than blocking and sidestepping, but it’s the best defense. While you’re in the air, lots of attacks are obviously going to miss you. Paired with the offensive tactic called juggling, you’ll be in the air pretty much all of the time. An odd thing to note about jumping, or really any time that you’re in the air, is that you’ll only take 1 damage from splash attacks. While you won’t move up fast enough against projectiles and melee attacks to make jumping effective, you only need to leave the ground to reduce the damage from splash magic, making it the best way to avoid taking a hit from splash.

When you land from jumping, you’ll be frozen in a short animation where you land. You can avoid this by doing a light attack in mid-air as you take off.

That’s the summation of things. While it’s great to block, dodge, and jump, you don’t want to be doing this forever. Ideally, you want to juggle in the air and never ever land. Ever. I didn’t teach you how to juggle, and quite frankly I don’t want to mess with that beast. There’s dozens of other guides out there on how to juggle, and steam doesn’t need one more. So if I were you, I’d go check out this guy!
[link]
Back when I played console, this was the guide I looked at to figure out how to get through insane mode. If you’re looking at this llfi, thank you.

I Have an Opinion About Your Guide!

Think my guide was good? Tell me! Think it was trash? Tell me again! Think I’m missing something important? You guessed it! Try and be specific, and I’ll look into it.

I’ve started getting requests to play with people since I posted this guide. My internet is bad, so I don’t usually play multiplayer. If I don’t lag horribly, and I don’t make you lag horribly, I’ll consider it. Otherwise, I promise it ain’t personal.

I Want to Play With Someone Else, but I Don’t Know Anyone Who Plays…

If you want to play with other people but you don’t know anyone, I recommend using the Castle Crashers community forums. They have a whole section dedicated to arranging to play with others!
Have a look: [link]

Just for giggles, I thought I’d occasionally work on a list of every enemy, a picture of them, what attacks they use, if you can block it, whether you need to face into the attack to block it, and their weight.