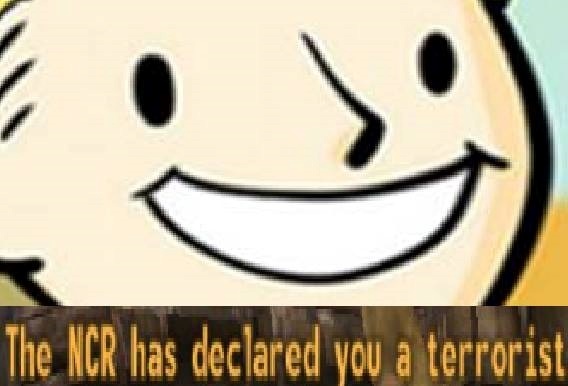 This gives you a brief description of all of the minor, less important factions in New Vegas, the ones you can’t finish hoover dam with.

Although a glorious major faction in fallouts one, two, tactics, brotherhood of steel (duh) three, and most of all four, the Brotherhood of Steel is pathetic in New Vegas. Their is only several dozen people in the Mojave chapter of the Brotherhood and only a few can leave the bunker, but the only one you ever see is the companion veronica. They exist in one bunker in hidden valley, and are currently in a state of lock down because a few palidins got killed. They aren’t trained very well and rarely ever get to see action. They are so lame in New Vegas that one person is seriously consirned because she lost a freaking pistol, it’s an actual unmarked quest.

The boomers live at Nellis Air Force Base and are extremly xenophobic. If you try to go near their area they will try to blow you up, and it is really annoying. You need them to complete the game, and their quest “Volare!” (that’s italian/Latin for ‘fly!’), ends with you getting them a plane from Lake mead and durring the second battle of hoover dam the bomb the place. They orignate from Vault 34 which is now inhabited by ghouls and is partially flooded.

Followers of the Apoclypse

The Followers are probably the nicest and smartest faction in the wasteland. They heal the sick and wonded, and fix up the junkies and druggies of the wasteland. They have several quests, all of which should take ten minutes to do. They also have the companion Arcade Ganon who is gay.

The great khans seen in New Vegas, is their weakest version yet. In fallout one and two they where a powerful raider gang that harrased the NCR and it’s caravans but now they are weak. They live in red rock canyon because they were massacered at Bitter Springs, and fleed there (which makes no sense at all because they are on oppisite sides of the map). They supply raider gang the fiends with drugs, and that’s really what they are in New Vegas – drug dealers. The leader of the Khans, papa khan, has been convinced that they should join Caesar’s Legion because this will allow them to defeat the NCR or become better or some crap. Many people in the Khans are onboard with this Legion alliance because they hate the NCR and they don’t know about legion destroying tribe’s cultural identies.

The white glove Society runs the ultra luxe, which is the most expensive and high class casino on the strip. They have a fancy restraunt with a french name, their interior is beautiful and white (just like them), and they have a fountain on the exterior, no excorts unlike Gammorah and the Tops, and you actually need to have a sneak of fifty to bring hold out weapons in. They all wear tuxedos and dresses, white masks, and white gloves so they look very fancy, and their weapons are canes. Did I mention that they are cannibles and that their quest can involve killing one of your human companions so they can eat them?

The tops is the most gambling oriented of the casinos on the strip. They have a few escorts, but not like gamorrah, their interior looks okay, and they don’t really have food. But they do have entertainment which isn’t that bad if you complete a quest for them. The Chairmen all talk like they are from the fiftys and it is really funny, I’ve heard it’s paying homage to the former owners but I’m not sure if that is true. Their leader benny is the one who shot you in the face at the start of the game, and if you are a woman you can bang him if you have the black widow perk but it’s really weird. Benny also has a reprogrammed sucritron in his room named “Yes Man”, who you need for the independent new vegas ending.

The Omertas are the cheapest people on the strip and their casino looks like crap. They are affiliated with the legion and are really just gangsters. Their casino focuses mostly on prostitution, having a large number of prost¡tutes through out their building. Also, their quest gets you the Pimp-boy 3 billion which is nothing short of amazing.

The kings are incharge of Freeside, the suburb surronding New Vegas, and they have an amazing backstory. After house assimilated the tribes of the Strip, he kicked out the people who are now the Kings. The called dibs on a building called “The King’s school of impersonation”, and from there took over the suburb. They looked into the history of the building and decided that it was a church before the great war based around a man named “the king”. People would come from all over the world to learn how to talk, walk, and act like the king. They decided it was only right to respect the church and be like “the king”. If you can’t tell, there was no church and their HQ is a pre-war elvis impersonating school, and they are a faction of elvis impersonators and it is halirous. The leader of the kings has a dog named rex who can be a companion if you complete the quest “GI Blues” (which is a movie with elvis in it), and Rex’s quest is “Ain’t Nothing but a hound dog” (which is an Elvis song).

The fiends are the biggest group of raiders in New Vegas. They are found in the western part of New Vegas, and various places west of there like the Sunset Sarsparrila Head Quaters. They are addicted to tons of diffrent drugs and are supplied by the Great Khans. They are generally hostile to you unless you go into vault 3 (their base), and say you are with the Khans. Their leader, motter runner, can be found in vault 3 and is always high. It should also be mentioned that the Fiends capture people at the middle of the night and r a p e them.

The Vipers and Jakals are small raiding factions, they have no story what so ever and exist for the sole purpose of gaining XP and adding on to the length of the game. The only actual reason why you should care about them is because you can get a Gun Runner’s challange from killing enough of them with machetes and stuff

The scorpions are this random gang that have one location in the game, it’s some hotel/motel in North Vegas.

The Vann Graffs sell Energy Weapons and you’ll probably go there alot if you make an energy character. If you do their quest, which is pretty easy, you have to let them kill Rose of Sharon Cassidy. They want to kill Cass because they are involved in a conspiracy with the Crimson Caravan that has to do with a caravan monopoly and Cass is a lose end. Also, if you do the Brotherhood of Steel main quest then you have to kill all of them, because they distribute technology to the general public – something the brotherhood is morally opposed to because their mission is to hoard all tech so no one can use it but them. Wait no I mean, presurve and keep all technology so humanity cannot use it to destroy them selves again.

The garret twins run the atomic wrangler which is the only casino in freeside. The twins Francine and James both have quests for you, also you can pay James to give you Karma in freeside which is pretty cool. Jame’s quest involves getting escorts *cough cough*prositutes, and ends with you finding out that he has a robot fetish – wierdo. Francine’s quest is called “Debt Collecter”, and it is exactly what it sounds like – you get debt from people who owe the garrets money (and get a fraction of it for helping them).

The Crimson Caravan is assossiated with the NCR, through trading, and has almost completely rided the mojave of all other caravans with the vann graffs in the hope that they can make a monopoly. They are quite profitable and their head quaters looks more like a small trading town than the hq of a major caravan. For Rose of Sharon Cassidy’s quest, or Cass for short, you need to kill the leader of the CCC in an act of revenge because she destroyed her father’s, John Cassidy (yes the companion from the second game), caravan which was her only memory of him beacause he left her to do destroy the enclave with the chosen one.

The Gun Runners are a weapons manufacturing company, they have no bosses and make all their products. They make good weapons and have a DLC based around them. For the Vann Graffs’ quest you have to steal weapon blueprints which is a kind of hard infultration if you don’t have a stealth boy on you.

In fallout two, the enclave was a juggernaut. In fallout three, they were considerably powerful blowing up liberty prime and all. But in New Vegas, they truely are pathetic. They have six members, five of them being old people. They have one quest “For Auld Lang Syne”, which is when you go to various locations with arcade ganon and then he tells you he used to be in the enclave, then you go to various places ask for former member’s of the Enclaves password to their base, and then you go in their base and all the old people are in freaking x-1 power armor, and you get x-1 power armor, and you get to decide who they are fighting with, and by that I mean “Who are you going to shoot a vertibird at?”.