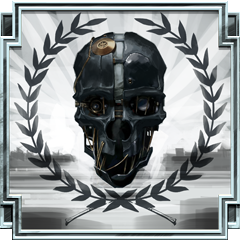 Love achievements? Hate spoilers? Welcome to my chronologimafied mission-by-mission achievement guide to Dishonored, so you can get the hidden achievements without having to look up the entire game.

I found Dishonored to have a lot of easy but also easily missable achievements. The following guide is meant as a chronological mission-by-mission help when you wish to hunt for achievements in Dishonored.

When you start a new mission, you will only have to read through that mission’s section of the guide, and thus avoiding learning too much about the story!

Each mission can be loaded later. I’ve marked achievements with a * that can easily be done later by reloading the mission.

You won’t be able to get all in one run, but you can get most, especially if you don’t mind saving and reloading a few times.

Please don’t hesitate if you have comments, corrections or additions.

For the following achievements, you will have to play a specific way throughout the entire game:

Mostly Flesh and Steel: Purchase no abilities or enhancements besides Blink. You are not allowed to upgrade Blink either. Bone Charms are allowed.

Ghost: Alerting no one but key targets.

Shadow: Alerting no one, not even key targets.

Clean Hands: Killing no one. If you wish to do these achievements, especially Clean Hands, read up further before you begin. There are known “bugs”, where you by “accident” can kill people (like blowing up a wall near the beginning, killing two guards if you aren’t careful). There are Community Guides or video guides on YouTube.

Faceless: After escaping Coldridge Prison, complete a single mission without alerting anyone.

Specter: After escaping prison, complete a mission without alerting anyone, and kill less than 5 people.

Surgical: Play from the first mission through Kaldwin’s Bridge killing fewer than 10 characters.

Achievements throughout the game:

Look out for the opportunity to do the following achievements, as they aren’t mission based. I’ve put in bold what you need for easy overview:

Thief: Pickpocket everyone before you take them out.

Occultist: Collect 10 bone charms – this is very hard to miss.

Inhabitant + Creepy Crawly*: Take possession of a rat and hide in a rat tunnel for 3 mins. The achievement won’t pop until you leave the tunnel, so don’t sit in it forever waiting like I did, while your significant other keeps looking over at your screen, thinking you’re the most boring person in the world.

Big Boy: When you bump into a Tallboy, save and jump on him using Blink. Reload.

Alive Without Breath*: Take possession of a fish.

Wall of Sparks*: Rewire a Wall of Light and kill an enemy with it – I picked up an unconscious enemy and walked through it to get the achievement.

Merchant of Disorder: Acquire 15 weapon upgrades – difficult to miss, pick up blueprints when you bump into them.

The following achievements are also not mission based, but you will have to go out of your way to get them, especially if you do a nonlethal playthrough. I won’t go too much into detail with how to do all of them.
The ones marked with **, I have added a place to do them throughout the guide.
Note that most if not all of these are cumulative, meaning that you can’t rinse and repeat, but will have to get everything in the same play.

Manipulator**: Cause others to kill 5 of their own allies.

Hornets’ Nest**: Kill 4 enemies in one second with a crossbow. Bend Time and awaaay with the crossbow bolts!

Tempest**: Kill 6 enemies in less than one second. I did this by making a neat little pile of 6+ unconscious enemies and then throwing a grenade at them (horrible but effective).

The Escapist**: Elude 5 persuers without killing them or leaving the map (after Coldridge Prison).

Cleaner**: Fight 5 enemies at once and none survived.

Back Home**: Grab a grenade thrown by an enemy, and throw it back and kill the enemy.

Big Boy**: When you bump into a Tallboy, save and jump on him using Blink. Reload.

You can’t miss these even if you want to:
Dishonored
Excommunication
Child Care
Capturing Genius and Madness
Long Live the Empress
Resolution

Vanished: Escape the prison and sewers without being detected.

Wall of Sparks*: Now is an excellent time to do rewire a Wall of Light and kill an enemy.

Gentleman Caller: Do the two sidequests for Granny Rags – the last will come later.

Back Home*: Overseers like throwing grenades, so you can attempt this achievement: Grab a grenade thrown by an enemy, and throw it back and kill the enemy (remember to save first if you’re doing nonlethal).

Street Conspiracy: Do the sidequests for Slackjaw – the last will come later.

The Art of the Steal: Empty the safe before giving Slackjaw the combination.

Poetic Justice: The nonlethal way to dispose of the twins includes doing the above optional quests.

Versatile: The plans for the Incendiary Bolts are in the Distillery, behind the rolling metal door.

Art Dealer: Art Dealer’s Apartment – “Light Along the Inverse Curve, Sokolov’s Self Portrait”; “Daud and the Parabola of Lost Seasons”; “Custis, Morgan and the Postulate Child”.

King of the World*: Reach the top of Kaldwin’s Bridge.

Harm’s Way*: Cause 5 unintentional suicides. The following is from the wikia: “The guests in Lady Boyle’s Last Party can be forced into the Wall of Light by possessing them, walking to just in front of the wall of light, and then ending the possession. The resulting stagger will then cause them to walk into the wall of light, thus “committing” suicide. Make sure to take out the nearby Overseer or he will prevent Corvo from using magic with his second attempt.”

Well Mannered: You can do the mission the lethal or nonlethal way, but cause no disturbances or disruptions at the party whatsoever.

Versatile: The blueprint for the Sticky Grenades can be found in the security office at the entrance to the Boyle Mansion.

Art Dealer: Top floor of the Boyle Mansion – “Vera Moray and the Affix of Her Skin”; “The Spymaster’s Axis of Asymmetry”.

Return to the Tower

Versatile: The blueprints for Explosive Bullets are in General Tobias’ office.

You are now ready to do Versatile! If you missed some of the blueprints, you can find them in the next mission. When you find an area with a lot of enemies (e.g. The Loyalists, two missions from now), save and kill a (conscious!) enemy with:

* Spring Razor
* Bullet
* Crossbow Bolt
* Sword
* Grenade
* Sticky Grenade
* Incendiary Bolt
* Explosive bullet (according to the wikia, it may require the enemy to be killed with the blast rather than the bullet – shoot at the surface near the enemy)

Political Suicide: Nonlethal completion of the mission – sleepdart, get the confession, and go back to the announcer.

Art Dealer: 2nd floor of Dunwall Tower, beside the Lord Regent’s room – “The Empress and the Empty Seat”.

Food Chain*: Excellent chance to save, then assassinate an assassin for this achievement, then reload (if nonlethal playthrough).

Art Dealer: In the first area after escaping, climb up the chain, cross the catwalk and find the weeper where the painting is – “The Commutative Rats and the Weeper”.

This Is Mine: Optional side-quest to go recover your belongings.

Versatile: In case you missed the plans for the Incendiary Bolts, it can also be found in Daud’s chest.

Art Dealer: In the Chamber of Commerce, on one of the floors when climbing down the chain after Daud – “The Torturer’s Quaternionic Groan”.

Versatile: In case you missed the plans for Explosive Bullets, it can also be found in an abandoned rail cart.

Versatile: In case you missed the plans for Sticky Grenades, it can also be found in the looters’ warehouse.

Art Dealer: In Granny Rags’ room beneath the whale corpse – “The Outsider and the Circumscribed Void” (Ding! Achievement 🙂 ).

There are a lot of enemies here, so this is an excellent time to save and get your lethal on:

Big Boy*: When you bump into a Tallboy, save and jump on him using Blink. Reload.

Hornets’ Nest*: Kill 4 enemies in one second with a crossbow. Bend Time and awaaay with the crossbow bolts! I did this here on top of Piero’s Workshop, shooting two crossbow bolts at each enemy.

Tempest*: Kill 6 enemies in less than one second. I followed the Wikias advice, being: Knock out six guards/modify the Arc Pylon and render all enemies unconscious. Then, pile 6+ up, save, and throw a grenade at the pile (I had to hold the grenade and throw it just before it exploded).

Manipulator*: Make others kill five of their own allies. I also got this by stacking up five unconscious guards, standing on the pile and have a tallboy shoot at me with explosives arrows.

The Escapist*: Elude 5 persuers without killing them or leaving the map (after Coldridge Prison).

Cleaner*: Fight 5 enemies at once and none survived.

Versatile: If you haven’t done it yet, now’s the time – you can go to Piero and buy the upgrades/ammo you need. (Save and) kill a (conscious!) enemy with:

* Spring Razor
* Bullet
* Crossbow Bolt
* Sword
* Grenade
* Sticky Grenade
* Incendiary Bolt
* Explosive bullet (according to the wikia, it may require the enemy to be killed with the blast rather than the bullet – shoot at the surface near the enemy) The Light at the End

Whisper Ways: Complete TKoD without alerting anyone. Chokedust does not appear to alert enemies.

NOTE:
The Brigmore Witches has an achievment: “Enough Coin to Disapper: Survive TBW in Low Chaos with 10.000 coins.” According to the Wiki, you can max get around 7.700 coins in TBW. If you wish to import your save to TBW after you finish TKoD, make sure that you have at least 3.000 coins when you finish the game (more would make the achievement easier, of course). Otherwise, you will have to start a new game, as that will give you a starting coin purse of 3.000 coins.

Throughout the game:
Rats and Ashes*: Attach an arc mine to a rat, resulting in a kill. If you’re doing Cleaner Hands, remember to save and reload.

A Captain of Industry:
Well Connected:
Purchase all favours: First mission has 3. Note that you don’t have to actually do the favours in the mission – only buy them (in case you’re lazy like me).

Just Business: Get the information you need.

Rats and Ashes: After escaping the Slaughterhouse, I saved and put an arc mine on a random rat and waited. Reload for Cleaner Hands.

Eminent Domain:
Well Connected: Purchase the last two favours for your ach. It will pop when you start the mission.

Stone Cold Heart: On the top floor of Timsh’s estate, you will find a statue of Delilah. Talk to it. If you enter from the balcony via apartment 10, it’s to the right. It will come up in yellow if you have vision. 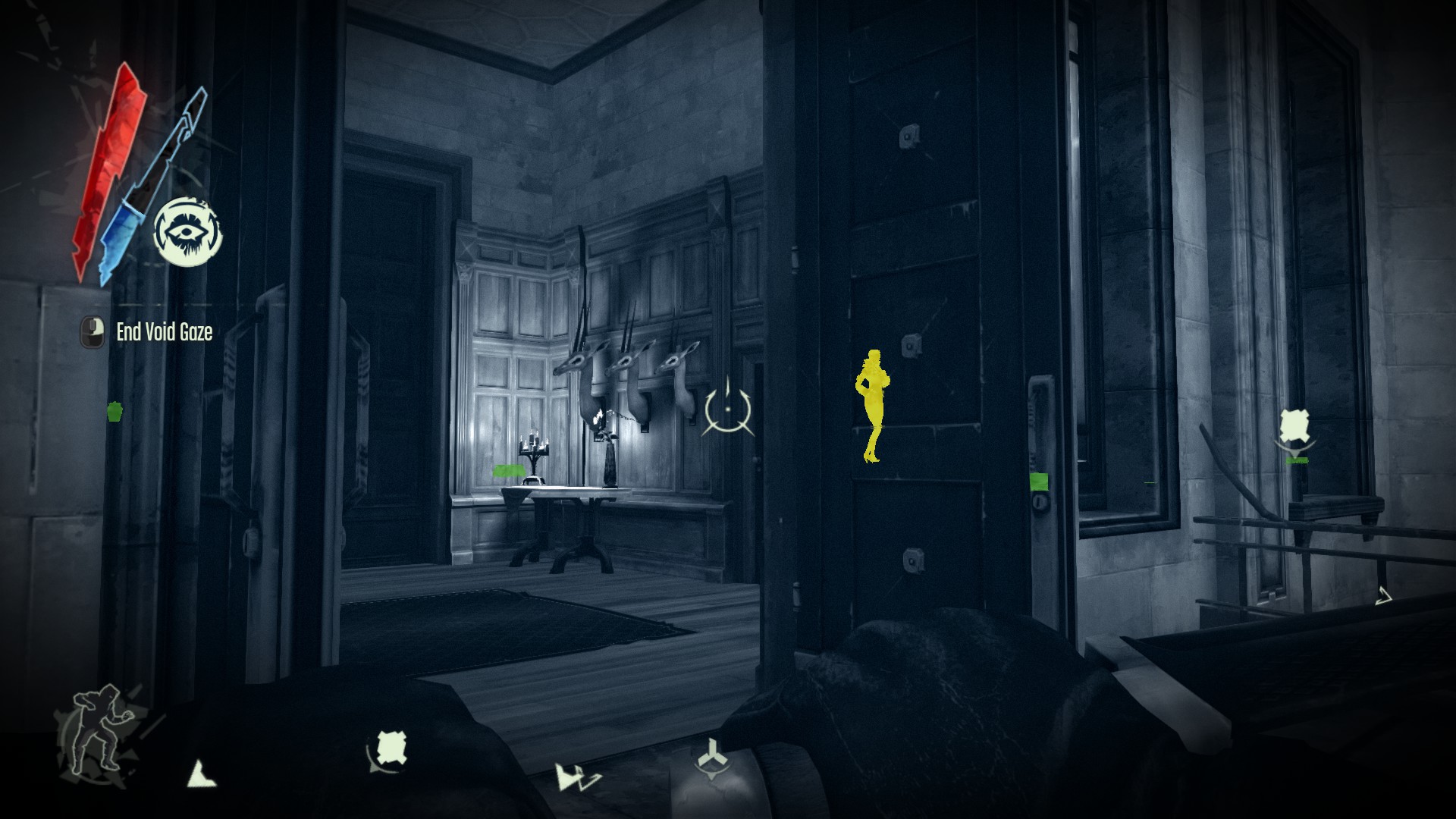 The Surge
Message from the Empress*: Perform a drop assassination from atop the Empress statue. Remember to save and reload if you’re doing Cleaner Hands.

Silence is Golden: Complete TBW without alerting anyone.

Info from the wiki here: [link]

According to this, you can max get around 7.700 coins in TBW. Therefore, if you spent a lot of money in TKoD, like me, you might be best off starting a new game, as you will then start the DLC with 3000 coins.

Deal Maker: Purchase at least eight favours in TBW – Simply purchase every favour before each mission.

Throughout the game:
Wall of Flesh*: Use an enemy lifted with Pull as a shield. Not bound to any mission. Upgrade pull to rank 2, lift one enemy while you give another an evil stare. Reload if you’re doing Cleanest Hands.