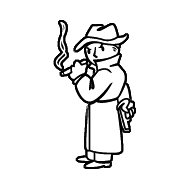 Mysterious Stranger. Everybody knows and loves him. This guide reveals how to get his lovely (and dangerous) weapon.

The weapon is held by a guy named The Lonesome Wanderer. When he was just a kid, his father left him and his mother was forced to care for him. He says his father was a mysterious person, and said he was like a stranger. Make sense? He passed a few things down, including a special .44 Magnum, and a fancy guitar (which you can steal). The father is now known to wander the wastes, giving aid to people who need it.

To get the Mysterious Magnum, approach The Lonesome Drifter. He is found just up the road north of El Dorado Gas & Service sitting near a Sunset Sasaparilla sign. There are two ways to get the weapon:
– Kill him and loot the magnum
– Pass a barter check during a quest (info below)
The weapon plays a nice little sound when it is drawn and holstered.
You can also loot from him:
– 18 .44 rounds
– Regulator Duster
– Sherrif’s Hat

He is involved with the quest “Talent Pool”. In this quest, Tommy Torini from The Tops wants you to gather various people to be entertainers, including The Lonesome Wanderer. When you talk to him during the quest, you can pass a barter check of 50 to obtain the weapon guilt-free.