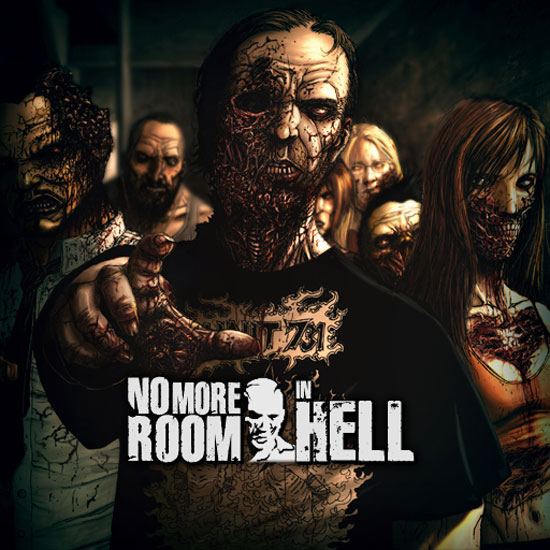 So let’s see, you found this game either on the Steam store or somewhere on the Internet, you decide to download it but after you do so, you realize that you don’t know how to play this game At All.Well if that’s the case then don’t worry because Am Here To Help.And if that’s not the case then What Are You Doing Here ?!.

If you ever played any game made in the Source engine, or in fact just any first person shooter you can safely skip until the “Extra Keys” header, it is the final header in this section, if not then Listen Up:

The Basics Of Movement:
Communications And Miscellaneous Keys:
Extra Keys:

This last header talks about keys that you’re not going to usually find in other games and are specialized to No More Room In Hell.

Items: How Good And Rare They Are, And What They’re Used For:

This section will be all about the different items you will see in No More Room In Hell Including: Melee Weapons, Firearms, Ammunition, Throwables, Miscellaneous, Items and Medical Supplies.

Items: How Good And Rare They Are, And What They’re Used For: PT2

I am forced to split this section into multiple parts as Steam has a limit on how long can each section be.
Continuing On:

So now I have explained how all the tools and medical supplies work, But What About The Weapons ?, now I am going to explain the tools that you will use to Delete The Zombies Out Of Existence kill the zombies, and i will start off with:

Items: How Good And Rare They Are, And What They’re Used For: PT3

So now I explained the melee weapons, time for the best part, FIREARMS !, but first I will need to explain the ammunition as some properties of the firearms change depending on the ammunition so without further wait.

So now that I explained all about the ammunition, time for the part you always wanted:

And now for the part you were actually waiting for, and that would be:

Firearms split into multiple categories including: Handguns, Sub-Machine Guns, Rifles, Sniper Rifles and Shotguns, we will go through each categories and what guns each one includes and all about each gun.

Items: How Good And Rare They Are, And What They’re Used For: PT4

Items: How Good And Rare They Are, And What They’re Used For: PT5

This is the last section talking about items:

And this concludes this part about the firearms in No More Room In Hell as well as all the available items in this game, one thing to note about firearms in this game is that reloading firearms in here is as realistic as real life, when you do a tactical reload (in other words a reload where you still have some ammo in the magazine) all the ammo that was in the magazine is lost, this goes for all of the guns except for the Shotguns and the Winchester 1892, so for everything else beside these 5 guns i just mentioned, when you need to do a tactical reload press the U Key to unload all the ammunition from the gun and then reload normally.

So after i explained all the items that are you going to use, some more then others, I will now explain what enemies you will be facing, starting of with:

These are you standard typical slow, kind of Ret*rded stupid zombies, they’re easy to deal with when it’s just one or two, but they can be very threatening in numbers, setting them on fire in anyway has a slight chance of turning them into runners, you’re going to be seeing A LOT of these guys, they can grab you and hit you so keep that Shove Key handy and you will be good.

Same exact deal as the normal shambler, except they are a tad bit faster in movement, not quite running but not quite, well, shambling, a tad bit more dangerous but only in numbers.

Dead USNG soldiers, wearing soldier uniforms, can come in any form except as a kid of course, sometimes they might have more health then other zombies as they get a larger health pool, when killed they have a slight chance of dropping specific items, their drops include, bandages, an empty Beretta M92FS, [5x] 9mm bullets, [7x] 5.56 X 45mm N.A.T.O. rounds, and if you’re really lucky an M67 Fragmentation Grenade, so if you can, it wouldn’t hurt to take a look if that one dead soldier has anything useful on him, sometimes it could be that one clutch you needed.

Now we get to the annoying types, as the name implies this one crawls, they cannot hit you normally only grab you, and they are rather slow, they’re health pool is so low that you can take them down with a fully charged punch, but here is where they get annoying, since they are in prone position 24/7 they can easily go under door barricades and when there are so many zombies or you’re in a dark space they can totally get to you and you wouldn’t notice, they are too far down for you to swing a melee or shove them away without crouching, and when they grab you they will start munching on your leg Like How My Stoned Uncle Munches On Crackers N’ Cheese With A Can Of Half Cooked Kidney Beans On The Side At 2:00 AM, their bite speed is much higher then any other type meaning a higher chance of infection, so please take caution and if you see one just take it out if you can.

These Annoying F*ck Wits bastards are the bane of every player in this game, they run really fast and are generally more annoying to deal with, they can come out from like anywhere, they can grab and bite or they can hit you normally, when being attacked by one, try to stun them first if they are running at you at full speed, thank fully, they have a less health pool than normal shamblers so that’s good at least.

It sounds like an intense type of zombie involving bug’s and stuff like that but no, they are the result of some weird bug somewhere in the script involving how much health can shambler shave, they are almost always USNG shamblers and the only way to identify one is one they take 4 sledgehammer swings to the head AND THEY’RE STILL STANDING or when they take 6, 357. caliber shots straight to the head AND THEY’RE STILL F*CKING MOVING I MEAN SH*T, so please watch out from these guys they can be annoying as hell.

These Little Sh*ts make every parent in the NMRIH wish they used a condom or any form of birth control, these, highly mobile, very small Sh*t Heads are really annoying to deal with, they have about double the health pool of a crawler, and are faster then a runner, they cannot grab you but they can hit you at a higher speed then a normal shambler dealing a less damage, like it’s totally possible to be beaten to death by a little girl in her pink pajamas after she was turned into a zombie, i would imagine that if these kids were alive they would be Running Around Humming The Sonic Theme While Screeching “gOtTa Go FaSt” very annoying.

So, I explained to you how to play and what will you be facing in detail, but it’s time to explain what the hell are you supposed to do in this game, so then listen up:
So you have two game modes in this game, one of them is called:

[h]Objectives:[/h]
You will know that a map is an objective map when it’s name starts with “nmo”, in this mode, you along side your teammates will have to complete a series of objectives as you progress through the map before you are ultimately rescued, you will have to pick up your supplies as you go and you will be almost always on the move, as a result supplies will be scarce and you will need to manage your inventory quickly and efficiently, sometimes objective maps might make you take a different route every round, this is to give more replayability value to the game.

The second game mode you will encounter is called:

[h]Survival:[/h]
You will know that a map is a survival map when it’s name starts with “nms”, in this mode, you along side your teammates will have to protect an amount of zones from zombies, A through F, each map has different amount of zones, you will have to go through a series of waves, the standard for 95% the maps is 10 waves, each wave is harder than the last, you need to keep at least one zone with 1% health or you will fail, when you finish all your waves you will be rescued, to heal your zones you will need to use F.E.M.A. reinforcements bags, which will be found either in big wooden boxes or just scattered, each bag heals the zone by 25%, when a zone reaches 0% health you cannot heal it, however it will be regained and healed up to 50% when you get a F.E.M.A. Reinforcements Supply Drop, these supply drops will arrive after you finish a specific amount of waves along side a bit of extra down time to pick up supplies, these supply drops contain ammunition, medical supplies and melee weapons and firearms, the amount of waves you will need to complete to get one differs per map, you can summon one at will ONCE per round by firing a flare gun to the sky, also, there are supplies scattered around the map, sometimes in the form of caches, but sometimes they might be far off from the main safe area or locked behind puzzles you will need to solve, keypad you will need a password for which can be found somewhere in the map or obstacles that need tools to go through.

By the time you reach this section you have learned how to play the game, but, there is a difference between being able to Play The Game and being able to Play It Good, these are some tips and tricks to help you be even better at playing the game.