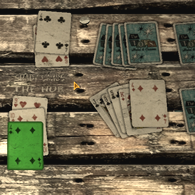 It’s time to play Caravan!Contrary to popular belief, Caravan is not difficult to learn. If you can add and subtract you’re 3/4 of the way there! This guide is intended to help you over the last hurdle…the keyboard. By the time you finish this easy-to-follow tutorial, you will know how to customize your Caravan deck and how to place and play cards on your caravans and on your opponent’s. After a few practice games with Ringo you’ll be ready to take merchants and street players throughout the Wasteland for every cap they’ve got!

With the zeal that only a newly minted Caravan evangelist can summon, I’ve put together this guide to help those who would like to play Caravan but simply haven’t been able to figure it out.

It seems that one of the obstacles faced by those who would like to play Caravan is how to select and place cards. Yes, the process is explained in the game manual, but, as is generally acknowledged, not explained well. So this guide is intended to be the easy-to-follow, step-by-step tutorial that will finally deliver you from being the laughing stock of the Wasteland and get you that Caravan Master achievement you know you’ve been coveting.

Please note: I am NOT going to go over basic rules of the game like direction and the properties of the face cards. That information is readily available elsewhere, including the game manual (yes, it is good for something). Nonetheless you do need to know that stuff, so refresh if necessary.

If you have even a slight grasp of the objective of Caravan and have retained the ability to add and subtract, then the only other obstacle that can keep you from playing the game is understanding the keyboard. Once you’re comfortable selecting and placing cards via the keyboard, strategy and deck crafting will quickly follow.

To get your first deck of cards, you’ll have to meet Ringo. Once you’ve fulfilled the necessary prerequisites, visit Ringo at the gas station and accept his offer to play Caravan.

On the game’s opening screen you’ll have a chance to wager. Ringo, will always ante first. You can press “W” to match the wager or “A” to raise. The screen shows the total ante and the funds you currently have available to play. If you change your mind and want to leave the game, press “R”. 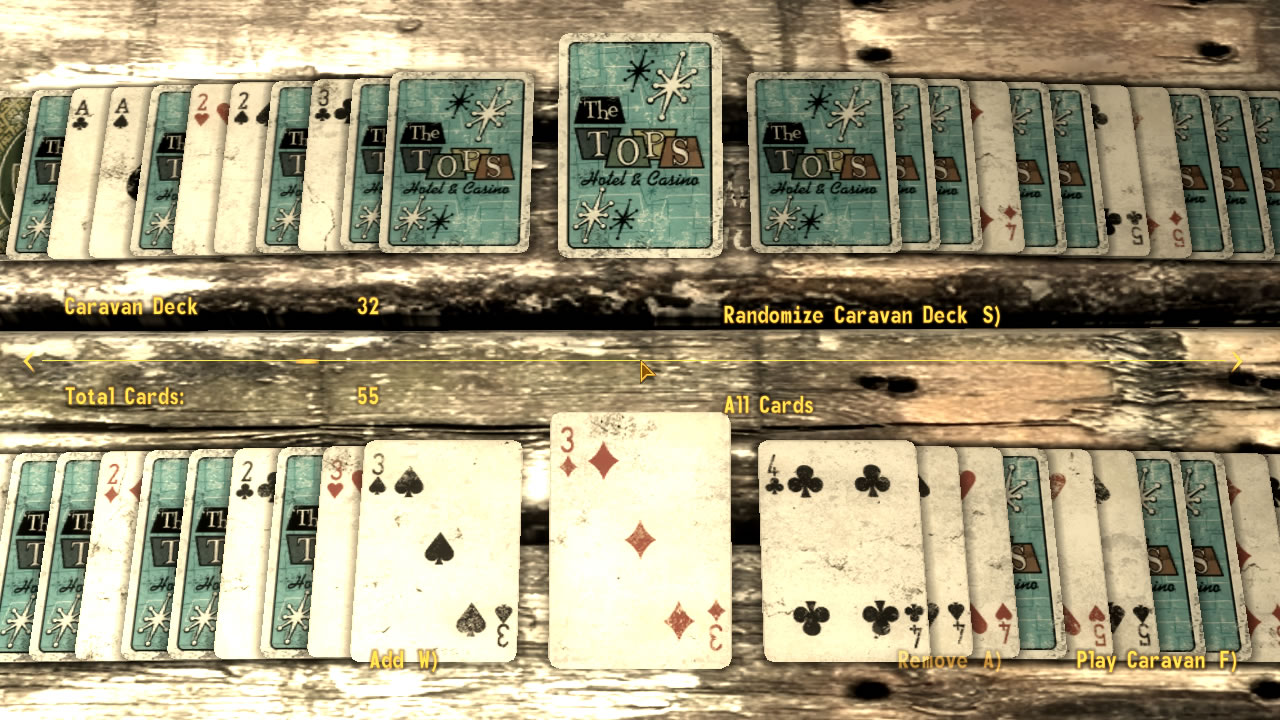 At this point, if you don’t want to customize your deck, either leave it the way it is or press “S” to create a randomized deck. Even if you randomize your Caravan deck, you can still add to or remove cards from it before play begins. For new players I recommend you randomize the deck and press “F” to start playing. Save customizing for later. After a few games, you’ll work out which cards you want to keep in your deck and which ones you want to discard.

To craft your own custom deck, use the Left and Right arrow keys to scroll through the cards. If a card is face-up in your Caravan deck that means it is active. That same card will be face-down in the source deck at the bottom of the screen. Conversely, a card that is face-down in the Caravan deck, meaning it is not active, will be face-up in the source deck, meaning it can be selected.

Remember, when crafting your Caravan deck, you cannot have fewer than 30 cards nor more than 55.

*Hint: To avoid confusion, craft your deck using a two-step process. First add all the cards you want (or think you want) from the source deck to the Caravan deck, then for step two, go back and remove cards from the Caravan deck to create the custom deck you desire.

Your custom deck will stay the same each time you play, until you change it yourself.

Once you’ve crafted your Caravan deck, it’s time to play your first hand. Pressing “F” takes you to the play screen. In the upper right corner of the screen the pot, the net total and your win/loss record are displayed. Ringo always goes first and places a card in his first caravan

According to the official rules, players may not discard during placement of the first six (three for each player) base cards at the start of the game. The program, however, has a bug.

In the lower right-hand corner of the screen, the options menu shows that the “Discard Card” option “Q” is active. That means that despite the rule, you can, one-at-a-time, discard as many cards from your hand as you’d like. This glitch can be used to create nearly fool-proof decks that will win almost 100% of the time. I’m a bit of a purist, so I refrain from using this loophole.

Also, you still have the option to leave the game at this point by pressing “R”, but unlike quitting on the deck screen, exiting the game now will cost you any caps you have wagered.

With Ringo’s first card now on the table it’s your turn. Getting your cards on the table and maneuvering them into the right position is a two-step process I call “place and play”.

Your first three cards are going to go into the three caravan spots, so use the L-R arrow keys to sift through your hand until the card you want to play is on top. Press “W”. Your card is tinged green and automatically placed on the board directly opposite Ringo’s card. You have placed the card on the table, but it is not in play yet. While the card is still green, you can change your mind and take it back by pressing “R”. The card will be returned to your hand and you can choose another card to play.

If you like the card you have placed on the board, you must press “W” again to play the card. When you press “W”, the card turns from green to white indicating that it has been played. Remember only an Ace or a number card can be used as one of the six “base” cards at the start of the game. 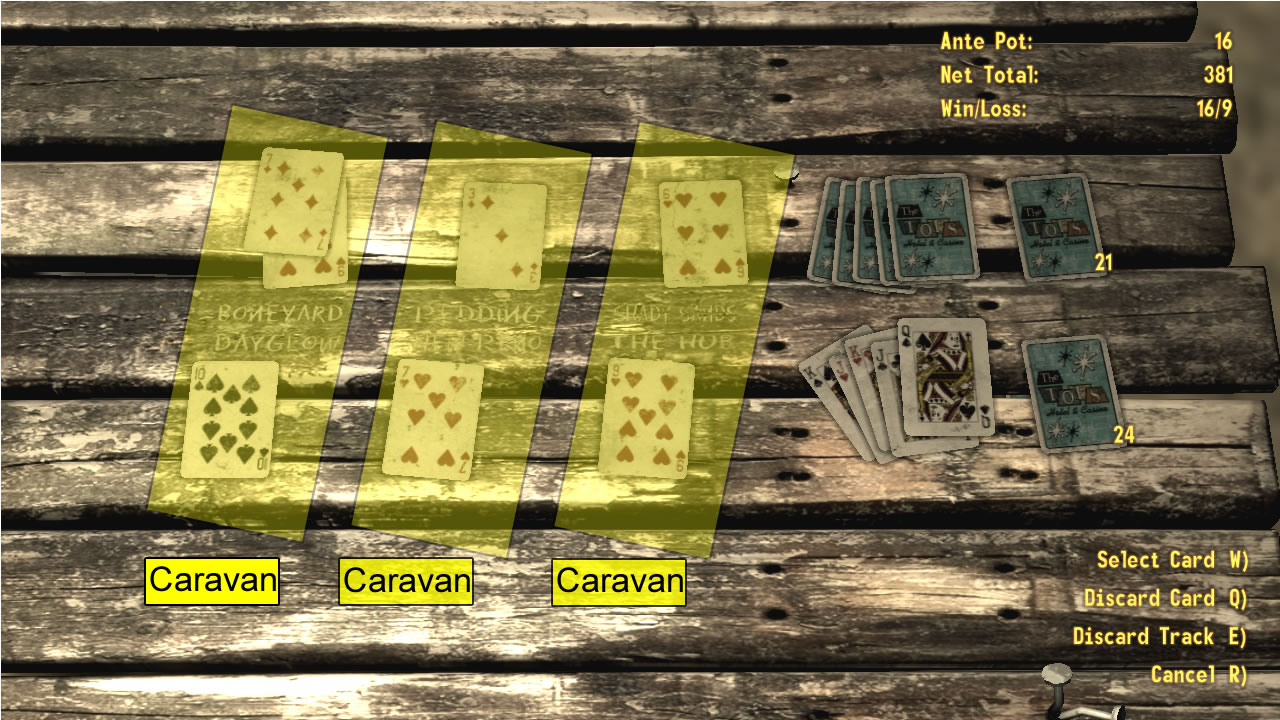 By turns you and Ringo place the remaining base cards on the table, forming the three caravans. As soon as you place your third base card, Ringo plays a card on one of his caravans, and the strategic play begins! Face cards can now be used, both players can discard cards and can remove their caravans from the board.

The same place/play method is used throughout the game. Select a card in your hand; Press “W” to place it-Green; press “W” again to play it-White.

Your first three base card will always be green when placed on the table, and the computer automatically places them next to each other. From that point on, however, each card you place will probably be brown when it hits the board. Brown is the tell-tale sign that the card has been placed illegally.

When you place a card it will always appear in the left caravan, and unless it’s a King, Jack or Joker it will almost always be brown. This is where, in addition to your L-R arrow keys, your Up and Down arrow keys come into play.

Use the L-R arrow keys to move the card along your caravans until you get to the stack you want to place it on. Then use the up/down keys as needed to place the card exactly where you want it. If the card turns green, you’ve made a legal move. Press “W” to play it. If the card remains brown, you can’t play it. Take a moment to figure out why and then either move it somewhere else or press “R” to return it to your hand.

Face cards can be played on your own caravans, or on Ringo’s. When your selected card appears in your left caravan, simply press the Up arrow key. It will appear in the caravan on Ringo’s side. From there, use the arrow keys to place the card exactly where you want it. Press “W” to put it in play.

And that’s it. That’s how the keyboard works.
Now that you know how to place your cards, you can go about the business of building and selling your caravans.

Last, but not least, you have to know how to win…

Victory conditions for Caravan were confusing to me at first until I understood that all three Caravans had to be “sold” before a winner could be determined. That is, between the two players, at least one stack of each of the three caravans had to total between 21 and 26 to bring the game to an end.

For example, in one caravan Ringo might win with a score of 26 points to your 16. You might win the second caravan with 23 to Ringo’s 21. But if in the third caravan, Ringo has 18 and you are over with 36, that caravan is not sold and the game is not over. One of the players has to bring his caravan into the 21-26 zone in order to win the game by two caravans to one. 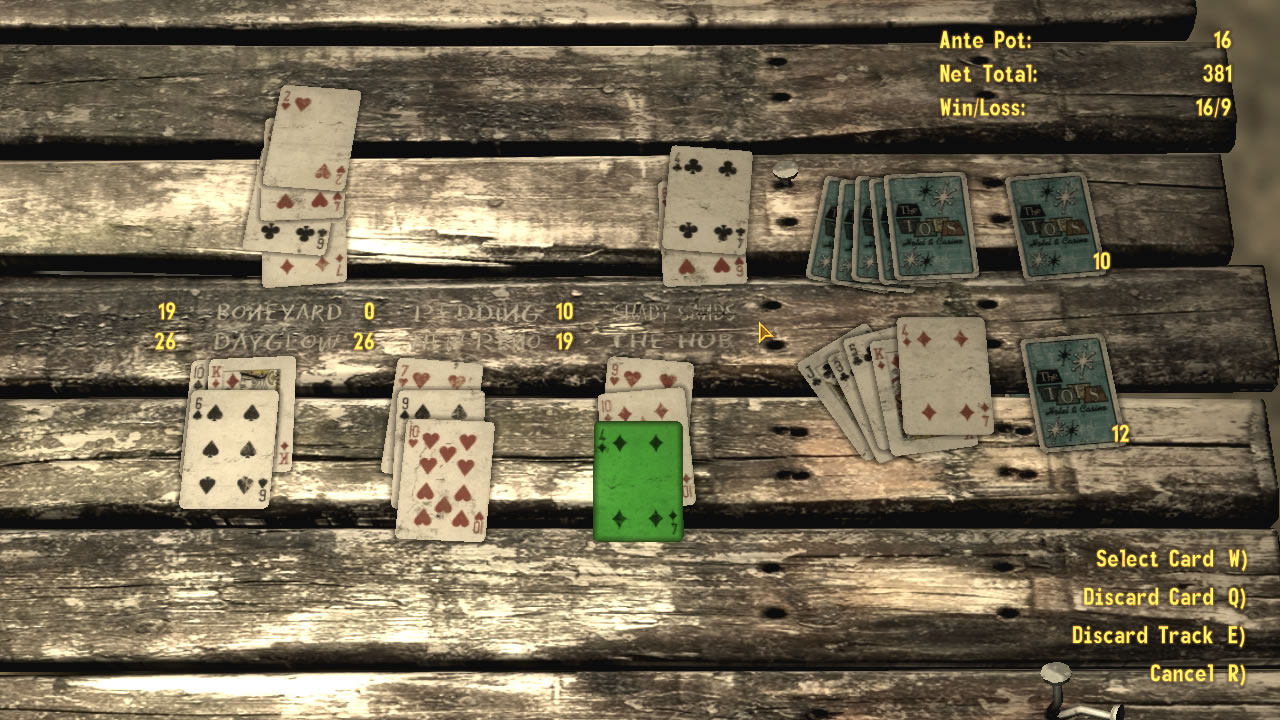 In the example above, the left and center caravans are “sold” with 26 points apiece. The right caravan could not be sold because it had failed to meet the scoring threshold. But the four has been placed, and as soon as the player presses “w” it will be played and the score will reach 23. The caravan will be sold, and the game will be over.

One thing I dislike about the way Caravan is implemented in the game is that as soon as a player wins, the screen immediately transitions to the score screen, leaving no time to analyze the board. I found this incredibly frustrating as I was learning to play, because I would often lose games without understanding why. If I had had a few moments to look at the last card, I could have figured it out. There’s nothing to be done about that, of course, other than to be aware of the scoring for each caravan as the game progresses.

I truly hope this guide helps FNV gamers who have wanted to play Caravan but have been frustrated in their efforts to figure it out. Suggestions, criticisms and thoughts about this guide are very welcome! I especially want to know about any factual mistakes I’ve made so I can correct them.