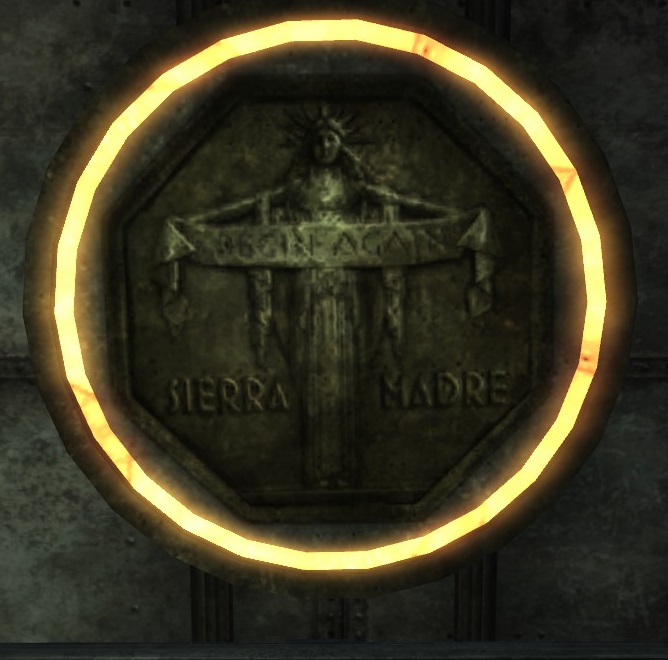 this is a simple, no nonsense, no glitches, no cheats, no DLC items, no outside items guide to robbing everything you can possibly fit into your pockets of the Sierra Madre vault, especially the gold.Everything you need to secure all 37 gold bars in the vault, is in the vault itself.

I got Sierra Madre fever, I wanna get out with all the gold, and thensome

the stealth boy in the vault locker

you know, the locker with weapons, ammo, sierra madra armor? on the side where the gold itself is?

first step, and most important, grab as much as you can without being overencumbered, do not take any more than you can carry before you grab the gold. once you got everything you can, grab the gold.

ideally you should do all this before you check the center terminal, cause if you do this while Elijah’s coming down to confront you, it’ll mean less precious time for you to escape properly.

I say properly because usually the forcefields near the elevator will activate if you get too close to them, however there’s a short window of opporunity where they won’t trigger. this guide will show you how to exploit it.

this version of the guide is a truncated version for quick viewing and copypaste.

how to move the gold
how to evade Elijah, and the forcefields

Read the next section if you need details on how to escape.

what to do before I get out of the vault?

but we need the stealth boy, that’s important, because we need it to evade Elijah.

How do I move the gold? I can’t possibly carry that much and make it in time

Keep in mind, as long as you’re not carrying too much, you can walk just fine, be sure to have looted the vault up to your carrying limit- drink a beer or something that increases strength, unless it’s already at max.

anyways, Is Elijah coming down to confront you? place the gold near the vault door, activate the stealth boy, CROUCH AND STAY CROUCHED. open the vault door.

your ideal escape route, as viewed from inside the vault, is up the stairs and along the farthest side of the rightward walls. Elijah takes the shortest route directly to the vault itself, but he walks, so you have time, but not exactly a large amount.

To move the gold, open your pip boy, drop the gold, move along your escape route as far away from the gold as you can manage, and pick it up again.

Look along your escape route, Drop the gold again, move as far along your path as you can reach, and then pick it up again. Repeat this as many times as it takes until you’re close to the deactivated forcefield room that Elijah came from.

now keep in mind, when I say the room, I don’t mean the exact door he came from, the door we’ll be going through is the farthest from where he came from.

when you’re significantly close to the door, save your game to a seperate file, now get as close to the forcefield as you can without triggering it. Triggering it accidently is ok, we have that seperate save file for a reason.

now that we’re in place, we wait for elijah to start accessing the vault terminal.

once he’s distracted at the vault terminal, you can get past the forcefields and you’re home free!

the forcefields activate before I can get past them!

you have one way to get around this: the fact that the forcefields are scripted through elijah, not the vault map itself.

it’s hard to see him if you’re at the proper doorway, but keep your eyes on Elijah, and watch for when he starts messing with the vault’s terminal.

when he starts using the vault’s terminal, he’ll be too distracted to trigger the forcefields, this is the window of opportunity to sneak past the forcefields, and completely bypass the escape sequence!

keep in mind however, you’ll only have a few seconds to sneak past the forcefields once Elijah is distracted, if you get there before he’s using the terminal, he’ll raise the forcefields and attack you. wait too long, and the vault trap triggers before you’re out of the room.

Yes! the bank is broken, now what?

Gamble until you get 7500 in wins, get all the holorifle parts, find the snowglobe, get the weapon kit repair kit codes, loot everything you can until you can’t stand it, store it in the suitcases near the front desk, and when you’re ready, say goodbye to the sierra madre while carrying a literal truckload of loot.

no really, you should exit the sierra madre while carrying as much as you want. you’ll be immediately transported to the abandoned bunker you came from, and will otherwise be safe from the wasteland’s horrors, that and trying to pawn the gold into the pre-war money from the hologram vendors is more trouble than it’s worth, besides, you got unique weapons out there that cost at least one of those gold bars, better make them count!

and once you return to the mojave, use the sierra madre chips you’ve saved up to buy weapon repair kits, go kill dudes, repair the most expensive weapons they drop and resell them!