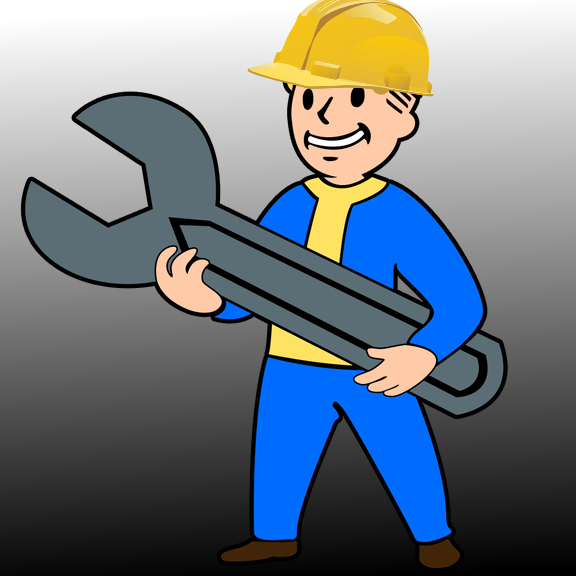 A simple guide on how to set up your game for a smooth experience with as few crashes as possible.

This guide was designed to be fool proof, don’t take it personally if it beats you over the head with information, I just want to make sure you make no mistakes.

This was made with Windows 10 in 2021, I can’t solve problems with other operating systems, it should work perfectly fine with Windows 7.

I heavily recommend you have all of the DLC before starting as not having them will limit what mods you can use, but ultimately you do not need them to make New Vegas functional.
If you bought the base game alone, you can still buy the bundle, the price of the base game will be subtracted from the total price and only cost $10.

You will need a way to open compressed zip files

I highly recommend using 7zip[www.7-zip.org] because it’s free and easy to use.

Step 1: Run your game once

After your game is installed, run you game one time, you don’t need to go into the game itself.

Seeing this is enough, click EXIT and move on to the next step.

This crates the files you need in order to set up your game properly.

Never run the game this way again, doing so will reset your .ini files, and then they will have to be edited again.

Further down you will be shown how to run your game properly from now on.

Step 2: Setting up your .ini files

Find your “my games” folder, inside the FalloutNV folder you will see this

If they’re not labeled “.ini”, don’t worry about it.
That’s just the file extension that tells the computer how to operate it, these files will always be .ini on creation.

Each section of these settings files is labeled with a word in [Brackets], you don’t have to copy the whole thing you see below, just what’s under the word in brackets, the bracketed word will tell you where you can find those settings.

On windows you can press Ctrl + F to search for lines.
If something isn’t in there by default, simply add it to the end of the section stated below.
Here is an example:

Right click “Fallout.ini” and select Edit, find the following and edit them to match.

Save and close the file
Now do the same for “FalloutPrefs.ini” to match the following.

Save and close the file, this completes all you need to do with these files.

New Vegas Script Extender
This is the backbone of modding, it allows mods to preform actions they otherwise wouldn’t be able to due to engine limitations.
As for the 4 Gigabit Patch, New Vegas is a very old game running on an engine that was already outdated when the game was made, this causes it to frequently crash due to the game asking for more computing power than the engine knows how to provide.
This patch allows the engine to use the power the game asks of it.

You can find NVSE here 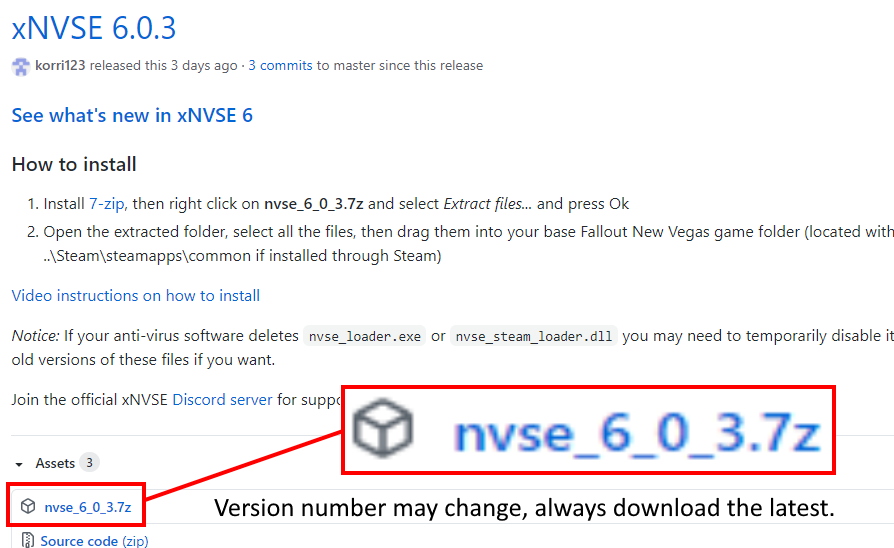 Next, you can find the 4GB Patcher here
[link]

NVSE and 4GB Patcher will not work if they are put into a mod manager, they must be directly installed to your game’s root folder.

Drag and drop the contents of the zip files to your New Vegas root folder, which can normally be found here

Now run “FalloutNVpatch.exe” one time, this will patch your game.

Now that everything else is set up, you can begin installing mods, and the best way to do that is with Mod Organizer 2.
If you install MO before you edit your .ini files, MO will create it’s own version of them that you will have to edit instead, see “Common problems” up by the .ini section.

You can find it here
[link]

The Skyrim Special Edition nexus page is just a place to host the file, it works well for every Bethesda game.

The Archive version allows you to drag and drop the files already unpacked.

Do Not Install This Into Your Game’s Folder.

The Installer version is the same as above, except instead it will find it’s own place to be installed.

Once it is installed, run it and make sure that “New Vegas” is your selected executable to run, this is the patched version of your game made by the 4GB Patcher.
This executable will automatically run NVSE, but you do not need to run it right now. 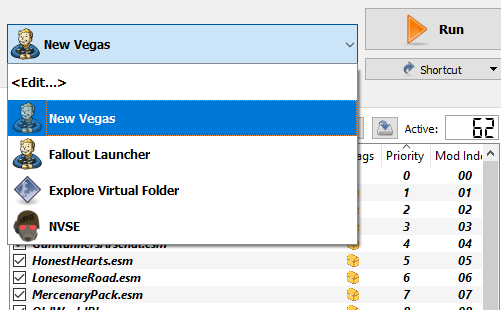 Through Mod Organizer in the top left corner, click Install Mod as shown below, this is how you will install the mods lasted below. 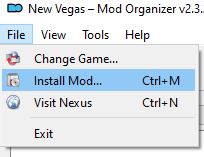 Minimum Required Mods: These should be installed through MO in the order they are listed.
1) JP LN NVSE Plugin, this is an extension of NVSE that needs NVSE to function and is required by many mods out there.
[link]

3) Yukichigai Unofficial Patch – YUP, it’s recommended that you have all the DLC, but YUP does have a version in it’s optional files if you don’t, see “Troubleshooting” for more details.
[link]

7) OneTweak for FNV, I recommend this only if you have more than one monitor, but some have said that it’s also great for alt-stabbing with one.
[link]

Install them one by one and it should look like this

And with that, your game is now ready to play. Have fun!

I don’t have all the DLC with YUP

Infinite loading screen when I load a save file

Try to save frequently and preferably indoors as they’re very low-stress on the game’s engine.

Dead Money: Elijah audio crackling/buzzing
I don’t know when the problem started, but it’s a problem with JP LN.

Game won’t launch
This may be a problem with your anti-virus or permissions;

Unfortunately I’ve never experienced this problem myself, so this as much as I can say.

“MSVCR120.dll was not found” when running the 4GB patcher
4GB Patcher requires “VC++ x86 Runtime”, a download is listed under “Requirements” on the mod page, simply download and install.

These are some additional mods that, while not required, do fix some things.
I do not include them above because unlike the mods in step 6, these may conflict with other mods you might install.

Additional Fixes
Ghost People Perception Fix[www.nexusmods.com]
This is a fix for the DLC “Dead Money” if you have that.
As this mod states, by default the ghost people have a perception of zero, which in gamebryo rounds itself into infinity, meaning you cannot sneak past them no matter what, this fixes that.

FNV Mod Limit Fix[www.nexusmods.com]
By default, FoNV has a limit of of how many mods can be installed at once, most people never meet this limit, but this fix also improves framerate and load times, so I recommend it but it’s not a requirement.

Unoffical Patch NVSE Plus[www.nexusmods.com]
Lot of good things in here, but it’s somewhat new and so there may be bugs.

Recommended mods for making your game look better, more balanced, and other tweaks.
[link]
I’m putting this in a separate guide as to not clutter up the main guide with information not needed to make New Vegas run well.

Having problems and cannot solve it on your own?
Leave a comment describing your issue and I’ll see if I can help you out.