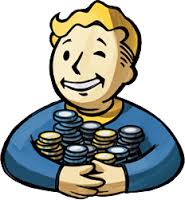 Being a sniper really isn’t that tough, compared to say, a melee build, since the only skills you REALLY need to work on are either Guns/Energy Weapons based on your weapon choice, and Sneak since those headshots are pretty much vital early on and in Lonesome Road. Most of this is really straightforward, but there are some things that don’t appear immediately obvious, like what weapon mods to use and what perks to get. This guide assumes Ultimate Edition, since references to most of the DLC will be made.

Mauno mostly served as a proofreader/consultant, but he’s probably the best person to ask about New Vegas stuff, so 😀 for everyone. 😀

First, stick solely with Light Armor, since if you played Fallout 3, you’ll know Power Armor is terribad for sneaking, and since that’s a major skill to increase so you can line up headshots easily, it gets tossed out the window like a Minigun. Second, pick which weapon tree you want, since there’s both Guns and Energy Weapons. The former is both cheaper and easier to find the weapons for, but the latter only uses one ammo type as opposed to the minimum of 3 types in Guns. (Microfusion Cells for Energy; 5.56mm, .308, and .50 BMG [actual name, .50 MG ingame] for Guns; both without perks that increase craftable ammo types in both categories.)

Next, for weapon types, stick with one, since choosing both really spreads the points out, which is a good way to get shot (more) in this game. Explosives is something else to put some points into, mostly for landmine purposes on the off chance you either miss or don’t headshot, which is eh if you’re fighting Fiends but pretty much a death wish in Lonesome Road, which will get its own section due to the enemy types there.

Key: Scoped=comes with scope or scope can be added; Silenced: weapon has silencer mod, with one exception as a unique. Strength requirements aren’t added, since the build involves 8 Strength and the only weapons that require higher are FIDO, the Minigun/CZ57 Avenger, and some melee weapons, which are all irrelevant here aside from challenges.

Uniques aren’t directly mentioned, but are usually similar to the base item, just with more damage or better clips. In few cases, Ratslayer being the prime example, the unique weapon has some or all of the base weapon’s mods attached, the Avenger mentioned above being a Minigun with half the clip but with the motor mod that increase fire rate. None of the unique weapons can be modded, though, so the unique Hunting Rifle (Paciencia) can’t be scoped, and considering it apparently has an iron sight issue, sniping with it is only advisable if you’re not using True Iron Sights.

There are probably others, but I can’t be bothered to look right now considering the only other weapon I know falls into this category is Medicine Stick, which isn’t scoped without game mods that affect the weapon mod system.

Energy Weapons:
Laser Rifle (requires 0 skill, scoped, when fully modded is excellent against most enemies, with the only other weapon in this category being used on them if an AMR isn’t needed)
Gauss Rifle (requires 75 EW, scoped, uses 5 ammo per shot with basic ammo, knocks down on hit, fun with Meltdown)

Ideal equipment would most likely be the NCR Courier Duster due to the Carry Limit increase and one or more of the above weapons. There are mods that increase the weapon selection, such as Millenia’s L96A1 which is pretty much between the Hunting Rifle and the AMR, dealing half the damage of the latter, which is a few points more than the former, requires 75 Guns, and can be gotten directly at the beginning when ammo for it is isolated to a few locations, such as Primm. The only mod it has is a silencer, but I’m not sure if it works like the Varmint Rifle or the AMR.

SPECIAL starting out: (this is my normal build, and it works fairly well thanks to the high INT)
If you have a build you prefer, go with that, since this one works best for Guns and heavy weapons like the AMR, Miniguns of all types, and the occasional Super Sledge beatdown.

Good with skill points, bad with gambling, but considering the ease of killing enemies and grabbing their stuff, not to mention the ammo saved, you don’t need gambling.

The chosen traits are really up to the player…however, DO NOT take Trigger Discipline. Most of the “good” sniping weapons have near-pinpoint accuracy and a low fire speed. Since that’s the case, the accuracy boost does barely anything worth mentioning and the drawback weakens the character. Fast Shot is better, since the low fire rate gets improved and the accuracy takes a slight ding. For example, the most accurate weapon I listed, (from memory) the Hunting Rifle, has a spread of 0.01, which as far as I know, is the lowest in the game. Taking Trigger Discipline only lowers it to 0.008, but reduces the firing speed from 0.9 shots/second to 0.72. With Fast Shot, the spread goes from 0.01 to 0.012, but the fire speed goes from 0.9 to 1.08, so the gain far outweighs the cost. Of the two Energy Weapons, both of them have spread just slightly worse than the Sniper Rifle at .025 and .03, respectively.

The Perks are dependant on which path you take, but I’m going to just list the perks that are useful for both, then for Guns, then for Energy Weapons. Some of these perks may not be obtainable with your build, such as Better Crits needing high Luck than my build above and Them’s Good Eatin needing 55 Survival, which is always a useful skill, although putting it much past that isn’t important unless you’ve got the skill points to spare.

Guns: Shotgun Surgeon, And Stay Back!, Hand Loader, Cowboy, Heavyweight due to AMR with no Energy Weapons relevant to sniping being more than 10 lbs.

This is easily the toughest DLC the game has in terms of combat, since the combat in Dead Money isn’t that bad aside from the environment itself attempting to kill you. If you do this DLC after level 40, you’ll find some of the best weapons in the game and ammo that you can access…but the Marked Men are almost psychic, the Tunnelers are actually a bit scary, and the Deathclaws WILL kill you in one hit if you aren’t level 50 with maxed END. Regardless of which path you chose, and I can’t say this strongly enough…BRING AN AMR WITH MATCH ROUNDS.

The only way to really survive here is to shoot everything from stealth and aim for headshots when possible, or to MAKE headshots possible when they weren’t.

And as a piece of advice, go into the Mile for the challenge, then leave. Excellent place to get ammo, but an even better place to get killed by the same Deathclaws…that regenerate
health constantly. It’s possible to loot the outer edges, but even with maxed Rad Resist, going near ground zero is a bad idea.