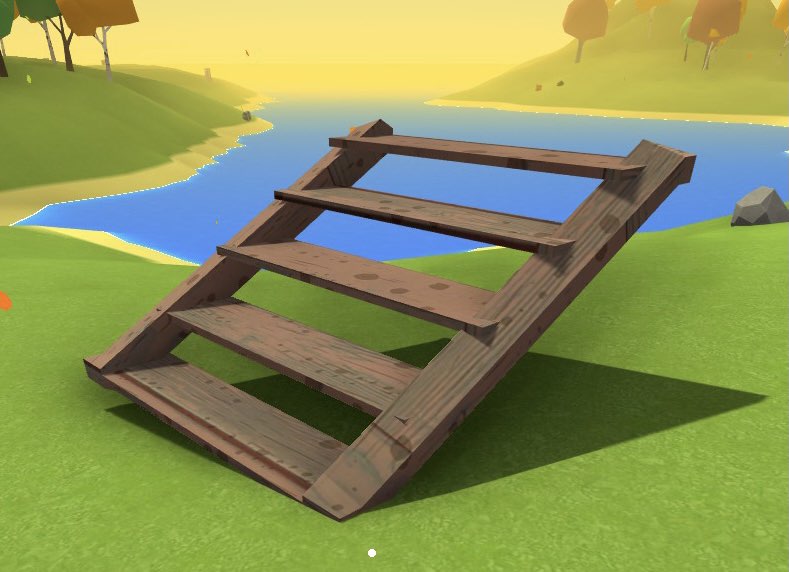 This is the ultimate strategy for silly ways to play muck.

Now I might seem crazy, but hear me out. Muck is a game about getting power ups and dealing damage to progressively increasing enemies with basic move sets which are highly telegraphed and all can be dodged (Except for the Guardian beam). But what if you didn’t have to dodge? If you didn’t even have to jump to avoid Big Chuck Rock waves or weave around Gronk’s thrown swords… But instead you stood perfectly still as a act of defiance towards all things considered holy and stared directly into a on coming one shot…

There is only one object as powerful as you in muck and that object is the wooden stair case. With its sloped 45 degree angle acting as a glamorous way to go up one story in a building. Or in our case a way in which you can block all projectiles and melee damage. Granted the stair isn’t immortal but with it you will be, The stair can be used in many different ways. For instance stairs can be placed in front of oneself in a last ditch scenario where in the on coming attacks cant be blocked, As in the Guardian laser beam. or if your early game and don’t have those 15 sneakers in the bag to deflect Gronk’s sword throw. any situation you manage to get you feeble early game body in the wooden stair case will deliver itself onto your aggressors like a long lost guardian angel.

How to Use Stairs

Stairs can be acquired many ways you can find them in item chests in the jack hut and wooden carts and are also crafted at a workbench using 2 wood from the low level trees or that is dropped by the bone wielding goblins. Stairs are like satellite dish, If they’re not facing the right way they’re not gonna work. You’ll want to make sure that you always the high end of the stairs facing towards the boss or mod you’re fighting so that its actually blocking the projectile and not letting it just pass by the *R* Key is going too be your new best friend. –remember that rotation only goes one way so strafing in the parallel way is key.– Always run counter clockwise around your foe as rotation is the same way. Next you’ll want to get good at using hot keys build muscle memory that allows you to switch from weapons to stairs and rotate them faster than the cows in muck run away. –Thats sarcasm the cows are so slow you want to be the opposite.– Now you may be asking why not just use wallsthey do the same thing as stairs which is mostly true, the upside to using stairs is the fact you literally get the upside of every combat scenario because of when the stair has served it’s purpose as a shield you can run up and over it easily getting up and over any short mobs that may be in between you and the boss you’re fighting. A little disclaimer but wall and stair strategies won’t work on bob the Dragon because you can’t build on the boat.

Hey thanks for reading all this, Ill be adding more strategies for blocking damage and general speed running when the game is updated or a find a new one while playing. I’ll also be doing silly strategies like a rock only run and a board only run and be writing on those here so look forward to that in the near future. If you have any strategy ideas let me know and i’ll get to writing! Glhf and go kill that pesky dragon.