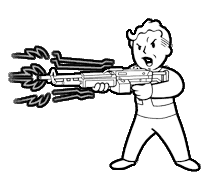 Here is a small guide to put some light on a point of rule that people with people deeply familiar with new vegas know, but often ignored :
the difference between “steady” critical chance and “multipliable” one.

In new vegas, most critical chances are multipliable, such the one brought by “finesse”, “build to destroy” and all clothes and armor that give you additional critical chance.

A few ones are steady :
_ the VATS bonus critical chance
_ Laser commander perk
_ Set laser for fun perk
_ light touch
_ Fight the power! (but only against the member of said faction).

Where you can benefit from it, it’s with weapons with a critical multiplier below 1 : automatic weapons.

For instance, Sleepy Time one of the automatic weapon with the highest critical multiplier has a critical multiplier of x 0,1.
If you have Elite riot gear + 1st recon beret + max luck + finesse, you would get at best 25 x 0,1 = 2,5 percent chance of scoring a critical hit per hit with Sleepytime, that’s pretty low ! Even automatic weapons with higher critical chance such the automatic rifle, the nail gun or silence 22 SMG, won’t benefit a lot from a high critical chance.

So in a short way : you want to benefit from critical hits with automatic weapons ? Don’t use the riot armor, or the 87th tribe armor and prefer the sierra madre reinforced armor, or any light armor, it will be much more efficient.

Theorically, with a weapon where the critical damage = regular damage, the benefit would be of 7,5 % additionnal dps with both light touch and better criticals, however, practically, the benefice are higher as it’s a way to bypass more damage threshold.
For instance, with a light machine gun doing 21 base damage, against an unarmored ennemy you will benefit of an additionnal 7,5 % dps, but again an ennemy with a damage threshold of 10, it would be a damage rise of 18 %, that’s a lot !

What weapons would benefit the most of it ?

Automatic weapons benefit the most of it, but in that case, you want a balance between the rate of fire and the damage/critical damage.

All laser automatic weapons benefit from it greatly, and you would be able to score multiple critical hit per seconds just by getting laser commander and the two ranks of set laser for fun.
The laser RCW deserve a special mention as because it’s precise and has low action point cost, it is an effective VATS weapon, you would be otherwise rarely be able to benefit from those 5 % steady critical chance, and on critical strike it benefit from “the professionnal”.

The two other weapons that are especially effective with that are the 12,7mm SMG and the 45 auto SMG. They have an extremely good ratio of high damage/critical damage and rate of fire to benefit on a regular manner of those critical hit. Furthermore, they would benefit from “the professionnal”. The 45 auto SMG is more interesting if you want to go simply for damage as it has a higher rate of fire, a higher ammo capacity when fully modified, and benefit of Grunt.

K9000, FIDO and the shoulder mounted gun are less interesting because of their low critical damage. If the CZ57 Avenger benefit on a theorical level, it has already a lot of piercing armor and dps, and the loss of some protection may not be worth it.

Theorically the turbo plasma caster is interesting : it benefit both from “set laser for fun” (despite the name with laser, it benefit all energy weapons) and “light touch”, reaching a 9 % cirtical hit chance. However, it has a lot of flaws compared to its non unique variant, the plasma caster, it remain however a strong weapon.