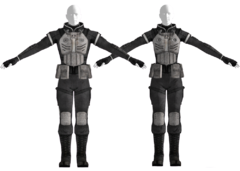 This is how you can get your fully upgraded Stealth suit Mk II using the console.

About The Stealth Suit Mk II

The suit has a similar design to the assassin suit, but is cleaner and has a luminescent white chest piece with similar white stripes on the back, possibly circuitry. The suit itself has a built-in medical system that automatically dispenses Med-X and stimpaks, similar to the prototype medic power armor in Fallout 3. A female on-board computer narrates the usage and current levels of these items, as well as warning of impending combat situations, reminding the Courier of an active Pip-Boy light, and making off-hand comments without prompting. The computer is very similar to, and just as talkative as, the personality modules given to the Light Switches in The Sink.

When poisoned by a cazador, the suit will dispense a stimpak if available and cure the poison.

When the Courier is crippled while wearing the suit, the suit will dispense Med-X.

The suit can be upgraded in the course of four stealth tests in the X-13 facility. Bonuses from upgrades are cumulative.

Firmware version 1.4 – Adds a bonus of +20% to Stealth movement speed.

Now most console codes are easy to find and use, but for a few items there is a bit more effort needed to get the items and the Stealth Suit MK II is one of these. The main reason for this is that it comes from one of the add-ons and you need to know what addons you have and in what order they are loaded to know the value of the first two numbers in the base ID number for the console.

Example, the Stealth Suit MK II’s base ID from the wiki and every other place you can find it is “xx00C12F”. The xx at the begining are unknown because no one can know what addons you have and the order they are loaded.

This guide is for the Pepole that have Fallout New Vegas Ultimate Edition from steam for the most part because I have figured out the xx values and if you have this edition from Steam your add-on loading should be the same and as such the xx values. (that is if your just running the game from steam and have all DLC installed and nothing else)

NOTE:
If you find that your load order is different you will need to figure it out before this method will work.

Now if you have any other version of the game or its not bought from steam you will need to have the DLC/add-on “New Vegas Old World Blues” and know in what order it was loaded so you know your values for xx.

If you dont know what order “Old World Blues” is loading for you there is a way to find out. You can go to [link] And instal there mod manager to find out, or if you dont have a lot of addons/DLC you can just do trial and error with the base ID until the suit is in your invintory.

I have not tested game behavior for the x-13 facility quests once I have upgraded the suit through the console, there might be issues with aquiring quests and or completing quests already aquired if you use this method. So in short continue at your own risk or do it on a alternate save file other than you main one.

Also use mod managers at your own risk, including the one I have listed. I only used it as a example from others recommendations and not from personal use.

So to do this we need to know three things:

Once we know this its very simple to get your upgraded Stealth Suit MK II.

Now start a new game or choose a current save, then bring up the console with the ~ key.

Once your suit is in your invintory its time to upgrade it.

Bring the console back up and enter the following:
completeAllObjectives 07006D8D

That will complete all quests to upgrade the suit in your invintory and now you have a fully upgraded suit.