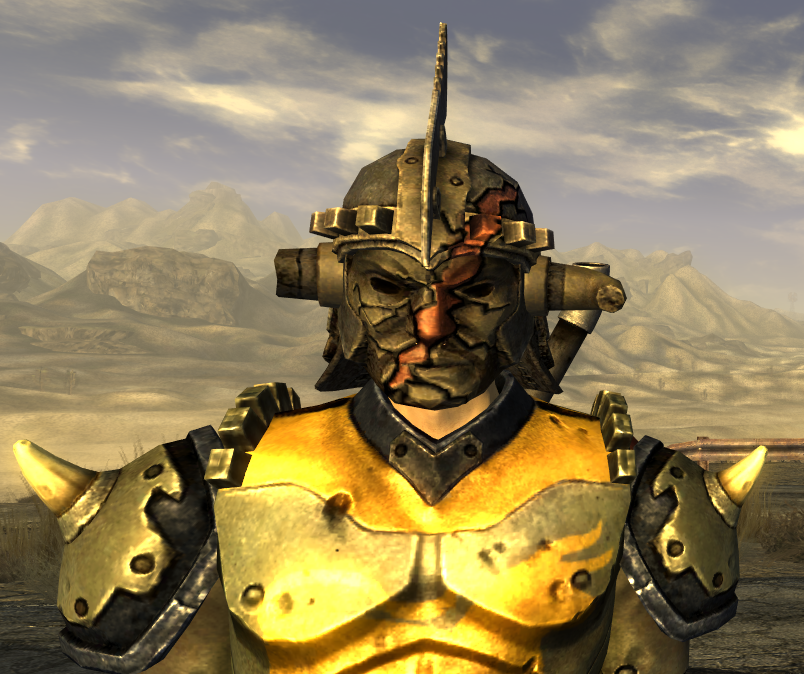 My attempt at creating the ultimate melee build, extremely powerful melee build able to easily kill anything stupid enough to get close, you ever wanted to curbstomp Rawr up close? I did with this build.

Strength 7 ”Beach Bully”
7 points of strength represents the berserker being a strong, well-trained man.
Combined with the strength implant and reinforced spine it will give him 10 strength, allowing him to hit like a train.

Perception 5 ”Wary Trout”
The berserker’s senses are pretty average.
Make sure to get the perception implant so you can get Better Criticals.

Endurance 9 ”Bullet Proof”
Unsurprisingly for someone who survived being shot twice in the head, he is built solid as an oak, and few can match the berserker’s extreme pain tolerance and unwavering fighting spirit.
If he gets the endurance implant he’ll become damn near unstoppable.

Charisma 1 ”Misanthrope”
Only one point in charisma represents the berserker being asocial and possibly autistic.
He was never one to mince his words, his complete lack of tact, his bad temper, and low social skills forced him to learn never to rely on others.
He might also have suffered frontal lobe damage from being shot in the head, which wouldn’t have helped.

Intelligence 3 ”Cretin”
The berserker always preferred physical rather than mental exercise, time spent reading was time not spent perfecting his body and martial arts skills.
Getting shot in the head probably didn’t make him any smarter either.

Agility 6 ”Catlike”
The berserker is quite fast.
With the agility implant you’ll be able to get the Slayer perk which will make his attacks overwhelmingly fast.

Luck 9 ”21-Leaf Clover”
The berserker would claim that his ability to hit where it hurts the most, and being amazing at blackjack is due to skill, but he can’t claim it was his skill that made Victor and Doc Mitchell save his life.
With the luck implant the berserker will get 10 points of luck, giving him an amazingly high chance of getting critical hits in on his opponents.

Hot Blooded
Fits well with the berserker theme of this build, doing even more damage when below 50% health.

Note that these are ordered according to what level they become available, not the order you should take them.

Lady Killer
While the berserker won’t charm anyone with his words, he exudes a kind of pure raw primal sexual virility which few can resist.
His body is like a work of art, and he has an element of danger to him, which gives him a damage bonus against women.

Confirmed Bachelor
This sexy beast of a man is also irresistable to men, and gets a damage bonus against them.

Entomologist
intelligence implant, I4, survival 45
Gives radscorpions, cazadors, and giant mantises something to think about, with a damage bonus to all enemies considered insects.

Bloody Mess
Fits perfectly with the brutal berserker theme, leaving carnage behind you, and giving a damage bonus.

2 Tougness
E5
The berserker is one of the toughest people around.

Living Anatomy
medicine 70
The berserker is very familiar with anatomy, both in how to take care of it, and how to take it apart.
Gives a damage bonus against humans and non feral ghouls, and lets you see the exact health and damage resistance of others.

Stonewall
S6, E6
The berserker is not an easy person to knock down, he is strong, tough, and has a good sense of balance.
His will to stand his ground also gives extra damage resistance.

Super Slam!
S6, melee 45
The berserker understand how to use force and leverage to topple his enemies.
Gives a chance to knock opponents down in melee.

Finesse
The berserker is more than just hard hitting, he also hits precisely, giving him a better critical hit chance.

Fast Metabolism
Stimpaks heal more.
The berserker might have been a doctor at some point, or at least been close with one, as he understand how to get the most out of all chems, including stimpaks.

Robotics Expert
science 50
The berserker isn’t just good at breaking the bodies of the living, even machines will fall before his might.
Gives a damage bonus against robots, and if you sneak up on them you can shut them down.
As this build uses chems it makes sense to get the science needed for this perk so you can make your own chems, plus the science skill book is the most common skill book in the game.
I recommend getting this perk before or early in the Old World Blues dlc.

Piercing Strike
unarmed 70
No armor can perfectly protect the entire body, or it would be impossible to move in.
Knowing how to get around the armor or through its weak points is important for any martial artist.

Unstoppable Force
S7, melee 90
The best defense against the berserker is to never actually get close to him, as even blocking his attacks is going to hurt.

Chemist
medicine 60
The berserkers understanding of medicine allows him to get the most out of his chems.
And sometimes performance enhancing drugs can mean the differece between killing a deathclaw, or becoming its lunch.

Jury Rigging
repair 90
Will make it a lot easier to maintain your gear.

Purifier
Even the fiercest abominations of the wasteland don’t scare the berserker, nor will they be able to stand against his might.

Better Criticals
perception implant, P6, L6
Hitting your enemy where it hurts is good.
Hitting them where it hurts, but harder, is better.
Critical hits do more damage.

Chem Resistant
medicine 60
The berserker’s deep understanding of chems and their addictive nature means he won’t get addicted to them as often as other people would.

Eye for Eye
This perk fits with the berserker theme.
Crippling the berserker will only fuel his fighting spirit, the pain he feels only motivate him to fight harder.
Do +10% more damage for every crippled limb you have.

Slayer
S7, agility implant, A7, unarmed 90
The berserker can overwhelm most foes with his incredibly fast and powerful melee attacks.

2 Implant GRX
E8
Allows the berserker to get the effects of turbo several times a day without the risk of addiction, experiencing the world in slowmotion.
Alternatively if you feel confident you can get enough turbo to keep yourself supplied, you could instead spend the 2 perk points on something else, such as Fight the Power! for extra offense and defense against NCR, Legion, or Brotherhood, Hunter for extra critical damage against animals, and if you choose to go with Ulysses’ duster: Travel Light so you can get close to your enemies easier, or Light Touch for the better critical chance and protection from critical hits.

Reinforced Spine
Together with the strength implant it will give the berserker 10 strength.

Brainless
Leaving your brain in Big MT will give you a lower chance of addiction.

Cardiac Arrest
Putting your heart back in your body will make healing items such as stimpaks work better.

All Implants
This build has enough endurance to get every implant in the game.
You should probably get the intelligence implant as early as possible for some extra skill points, and also prioritize the perception implant for the Better Criticals perk, and the agility implant for Slayer.

Lonesome Road
Will make you do more damage when you don’t have a companion following you.
This build has low charisma, so you might as well not rely on followers.

Elijah’s Ramblings
This will give your melee weapons even more critical damage.
Sure it was meant for Veronica, but the berserker will put it to better use. 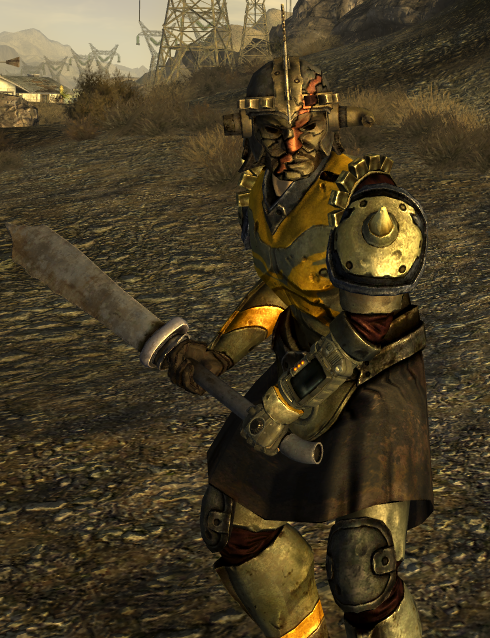 Armor of the 87th Tribe/Ulysses’ duster
Both will give a bonus to charisma, and more importantly: critical chance.
The armor gives +3 critical while the duster gives +5.
The armor also gives +10 AP, and better DT, but is a heavy armor, which means you’ll run slower than you would wearing the duster. 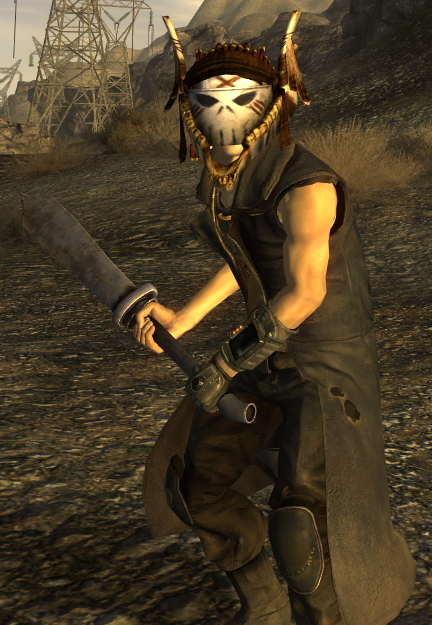 Aid
This build benefits from several chems such as: Buffout, Psycho, Med X, and Slasher.
You could also drink Rushing Water for even faster attack speed, and Battle Brew could also be a good choice of drink, giving a damage resistance similar to med x.
The Weapon Binding Ritual can be used to boost your damage and restore limb condition without risking addiction, or it can be used together with psycho or slasher for even more damage.
Eating Yao Guai meat will also boost your damage without the risk of addiction, and reading True Police Stories will increase your critical hit chance.
Lastly you can apply venoms such as Cloud Kiss or Bleak Venom to your weapon, in case you somehow didn’t think you were overpowered enough.

Dead Money
You can do pretty much whatever you want in Dead Money, though I recommend being a jerk to most of the companions, due to this build being best with evil karma.

Honest Hearts
Either agree with Joshua to fight the White Legs, or go on a murderous rampage when Daniel refuse to help you leave Zion without helping him some more first.
If you help Joshua fight the White Legs I would kill Salt-Upon-Wounds in a duel, as it seems more fitting for a proud warrior like the berserker than executing him.

Old World Blues
You can do pretty much whatever you like in Old World Blues.
I would however recommend being mean, because this build is best if you have evil karma when you reach level 50.

Lonesome Road
I recommend not saving ED-E at the end, and bomb either Caesars Legion so you can get Armor Of The 87th tribe, NCR if you are playing a Legion sympathic berserker, or both.
Ulysses’ fate is up to you.

Main Story
The faction that fits the berserker best would be Caesar’s Legion, but you can honestly just pick whatever ending you prefer.
The reason the Legion is a good fit is that they have similar martial values to the berserker, and the berserker’s high medicine skill would let him cure Caesar.
They do however have a low tolerance towards chems, and those who use or sell them, which clashes with the berserker’s use of chems.

I hope you liked my take on the ultimate melee build.
No I don’t think it’s necessarily the best possible melee build you can make, personal preference and playing style is also a factor, but it is certainly up there amongst the best.

I’ve been getting more confident in taking and editing screenshots compared to my first build, as can be seen from the fact that I actually used a picture of the character itself to represent this guide, as I was originally going to do with my General build, I might look into going back and doing so.

I released this build not long after my general build, but forgot to select its language, leading to this build getting buried.

Let me know what you think down in the comments.
Constructive criticism is welcome, who knows, maybe you thought of something I didn’t.