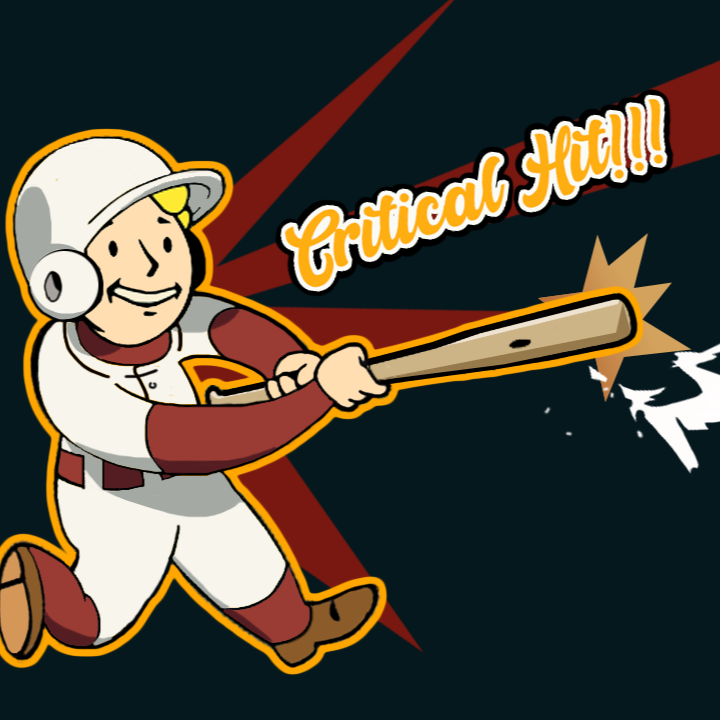 This build functions much like the Always Crit build, except instead of focusing on higher crit chance by getting True police stories/light armor perks, you are focusing on bigger crit damage with perks like Better criticals and Just lucky im alive allows it to significantly increase your crit damage while building a melee character makes it ideally suited to dealing massive amounts of damage.

Built to destroy
The 3% chance might not seem like a very reliable chance to crit, but you’ll be surprised how many crits will be going around throughout the game.

Small frame
Increase agility by 1 point but the downside of this trait will stop you from creating much havoc in fights early by taking your limbs out of it almost immediately. Get the Adamantium skeleton perk if this grows to be a problem.

Level 2 – Confirmed bachelor
Wow more damage against men? You can’t say no to that!

Level 4 – Educated
Can be picked or skipped depending on whether you feel like you need the extra skill points each time you level up.

Level 6 – Hunter OR Entomologist
Both are good perks, just depends on whether you want to do more damage against insects or to finish off animals quickly, I usually take the hunter perk but I feel like the entomologist perk is better most of the time.

Level 8 – Toughness
Is something you may need if enemies are poking you a lot.

Level 12 – Piercing strike
Consider getting this if you need a high amount of melee damage, it would help you edge against tanky enemies.

Level 14 – Fast metabolism
At this point, your stims starts to become more important.

Level 16 – Adamantium skeleton
It minimizes the damage that you take from your limbs. And because we picked the Small frame trait you are now less likely to be crippled.

Level 18 – Unstoppable force
Is a direct counter for enemies that block your attacks.

Level 20 – Super slam
Improves your sticking power and makes it harder for enemies to fight back, since they’ll be repeatedly knocked down.

Level 22 – Stonewall
Let’s not forget that knockdowns and melee baddies overall are still a great threat to you. Great perk to always have on most builds, as it’s going to be a lifesaver throughout the game. (Also to decrease the amount of melee damage received.)

Level 24 – Purifier
Going for the Purifier is great because it’s going to make your ghoul slaying much easier and your damage on deathclaws more devastating.

Level 26 – Chemist
Extends the duration of your chems.

Level 28 – Slayer
A good boost to your damage per second, increasing your attack speed. And attack speed are the only way to proc your crits.

Level 30 – Ninja
There are going to be scenarios when the enemy is stronger and you wont be able to properly fight them. In this case, you’re going to have to focus on getting kills on sneak mode. This perk increases your SAC damage and critical hit chance (even if it doesn’t seem that much early on). Taking into consideration the crit damage boost from Better criticals, Just lucky im alive, Elijah’s ramblings, Stealth girl, the bonus Ninja SAC damage is going to mean more damage to your sneak attack.

Level 32 – Silent running
If you for whatever reason want to sneak past enemies.

Level 34 – Better criticals
Once you’ve reached this level and you picked this perk, the real fun begins! You’re going to be dealing great amounts of critical damage so later in the game whenever a critical hit happens that any single target is going to be in danger when engaged by you.

Level 36 – Intense training: Luck
Any perk you choose is fine, this is just to make your luck maxed out.

Level 38 – Intense training: Charisma
One of the most common mistakes a player make with low charisma is to rely on their companions deal with aggro – this never really works and there are enemies in the game so powerful they can kill even the toughest companions in the game in seconds. The same isn’t true for a well-prepared character. Generally speaking leave the DPSing to your companions. Dead companions = no DPS.

Level 40 – Chem resistant
This perk is fairly powerful later on because of how effective this is against addiction. If chems with the most highest addiction risk is steady, rocket, and dixon’s jet, this perk is very useful for cutting down their addiction risk.

Level 42 – Bloody mess
Additional damage increase, nothing much more than that.

Level 48 – Living anatomy
This perk is nice because it boosts almost all the damage you deal.

Level 50 – Just lucky im alive
Ever heard of Overspecialization? Okay cool, here is something that can make crits hilarious, especially combined with the Better criticals perk. You’re gonna be attempting to deal as much damage with one hit, so crits are crucial.

Elijah’s ramblings
This one is a no-brainer, it’s a big crit damage increase equivalent of both Just lucky im alive and Better criticals perks combined, and just makes this build much more powerful.

Heartless
A good pickup against enemies that puke out poison damage like a person with a stomach flu like ones that include cazadores, radscorpions and Salt-upon wounds.

Coin operator
For crafting SM chips. Why SM chips? Because super stimpaks are easy to find in the vending machine and you can redeem other useful chems, and the chips has many other uses as well, you dont want to run out of it.

Knock knock is best to get early on.

Oh baby is one of the best for both damage and crits but needs high crit chance in order to be impactful.

Blade of the East is the best weapon to keep enemies under control, you will have the chance to knock your target per critical hit while you also have the possibility to keep them pinned down with the Super slam perk.

Figaro has a very high chance of proccing crits because of its 4x crit multiplier but you need some damage from items/perks first to make crits hit like a truck.

Personally I made all of these but if you’re interested in as much critical damage as possible go for the Old glory, or for DPSing get Katana(GRA).

Armor of the 87th tribe – Marked beast face helmet
The armor for this build is decent; though it’s protective value is overshadowed by other heavy armors, it is the only way you gain access to the crit chance bonus, which actually does have its merits.

Battle brew – Medx – Slasher
Increase your survivability by taking these items that help minimize the damage you take.

Weapon binding ritual – Psycho – Yao guai meat
A must-have when an enemy gets beefy enough to not die to your attacks.

Turbo
Good for utility but also helps you stay alive.

Super stimpak
Most of the time, you’ll be needing health in an instant.

Alcohol
Charisma and strength are basically all you need DPS-wise.

Stealthboy
To take advantage of your sneak attacks when dealing isolated enemies.

These companions, in some way, shape, or form, heavily boost the damage you output, which is really swell, because you need it, and once you have it, you can wreck anything. And companions are here to distract enemy while you deal damage if they deal much damage by themselves this would be even better. Good mention are.

Lily
You have a strong synergy with Lily in terms of crit boosting since all your damage is crits. With her Stealth girl perk, your damage output is through the roof (Coupled with the crit boost that you gain from Better criticals, Just lucky im alive, Elijah’s ramblings, Lily’s Stealth girl will enhance it even further). Additionally, the increased stealthboy duration is nice.

Ed-E (BoS Upgrade)
Usually, I take the BoS armor upgrade since Ed-E usually needs it, and Ed-E isn’t supposed to do fat damage. His Enhanced sensor perk could make a significant difference when looking out for enemies (e.g spotting enemy before they spot you). Camarader-E is key to increase his damage and armor(yours too), also he can produce ammo for Lily (and obviously some ammo, doesnt really benefit you, coz you’re a melee character) and he can repair your weapons daily.

Thanks everyone for reading and please let me know what you think! I’m also looking forward to your rants constructive criticism! As always, any feedback is greatly appeciated. If you want to reach out or follow me elsewhere, make sure to head over to my twitter: @KillKroozer or to my Youtube channel https://www.youtube.com/channel/UC5JHYv1f_E3BM9rbGdQ0K2A

Be sure to checkout out my other guides too: