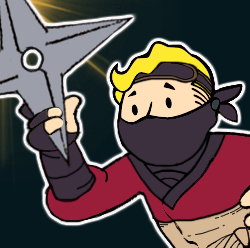 This guide is my most common build. There are many builds for a stealth and crit-based character, this is just my favorite and works very well for the way I play.

Built to destroy
Just the basic source for your crit chance. Nothin’ special.

Loose cannon
This perk is essential for your throwing weapons, because your projectiles arrive faster. Never let expectations stop you from throwing weapons. You will never learn if you try.

Level 4 – Light touch
Gives a delicious crit-chance bonus, activates when a light armour is equipped, and it has great synergy with other light-armour and crit-based perks.

Level 6 – Bloody mess
You will never have enough damage early, acknowledge that, my friend.

Level 8 – Toughness
The common pick up if you’re not doing so good early.

Level 12 – Piercing strike
This I get early for this build, as a built-in armor negation also means that it’s good at taking out tougher medium-armored enemies.

Level 14 – Purifier
Will bring about the swift demise of abominable foes. This can also be combined with the Abominable perk to noticeably damage mid-weight enemies like deathclaws and tunnelers, and almost instantly annihilate those annoying nightstalkers.

Level 16 – Adamantium skeleton
Yes, my dear friend, there is always one time where an annoying broken limbs interferes with our beheading. And here is your solution.

Level 18 – Fast metabolism
For when you’re not doing so fine early.

Level 20 – Super slam
This perk will give you a breathing room to respond to threats and to turn the tide of an unfavorable fight.

Level 26 – Chemist
Chems last longer and make you even more effective in combat.

Level 30 – Better criticals
An effective perk for increasing your damage potential. It relies on having both good attack speed and crit chance to be truly worthwhile.

Level 34 – Stonewall
Although you could pick this up earlier, there’s no real point in rushing this perk as it’s effectiveness prevents knockback, and you will absolutely annihilate any hard melee target up close later on, without worrying of getting knocked down.

Level 38 – Silent running
For those who utilize stealth, you can now run while crouching. Placing yourself in a good position will make you have a better chance at surviving, or pulling off a successful SAC.

Level 40 – Life giver
Increases your rather meager health pool, so it’s never a terrible choice, though sometimes you can just skip it.

Level 42 – Heave ho
Is a must get for this one, if you’re used to throwing or just think your projectile range is bad and needs more bolstering up.

Level 44 – Travel light
Alleviates some of the lacking movement speed you need to catch up enemies.

Level 48 – Living anatomy
Pretty straightforward. It displays an enemy’s HP and DT, as well as a small boost to your damage output.

Level 50 – Just lucky im alive
This perk alone enhances your crit damage so far, making your melee hurt more, also it gives you more luck points after a fight if your health is very low and let you pop those crits easier.

Heartless
Is a must if you want to keep pressure on the enemies that inflict poisons.

Reinforced spine
Is a good way of gaining additional strength and DT.

Lonesome road
You might also want to consider this perk which lets you gain 10% damage if you have no companions.

Elijah’s ramblings
Not enough crits and need some more? Here you go.

Katana (GRA)
Is great for a fast damaging weapon, as the attack rate is fantastic in turning your target into your own personal pin cushion.

Blade of the West
It’s your call since its damage is high and knockbacks on crit hit can be useful in some situations.

Old Glory
Backed with the Better criticals, Just lucky im alive and Elijah’s ramblings can actually inflict an ungodly amount of damage – mainly because it’s quite overpowered. And it hits like a truck in sneak mode.

Throwing spear – Throwing knife spear
For me, this provides so much utility. So to execute this one in New Vegas, you have two choices. One is to envenom your throwing spear, run some more until there’s a bit of distance between you and your target then throw. Two is to do a sneak attack if you want to take full advantage of its SAC damage. The only downside is that it’s attack animation is a bit long, so it has to be timed well, especially on enemies that are moving.

Stealth boy
Is an OK escape tool but pretty good for initiating SAC. Situational, but fun.

Psycho – Yao guai meat – Weapon binding ritual
The damage boost greatly improves the killing power, especially when these three are combined at once.

Battle brew – Medx – Slasher
Gives you much-needed damage resistance, allowing you to absorb some highest damage, as you directly engages heavy enemies in a fight.

Super stimpak
One of these for after you get into combat, chances are you will be low so hang back and heal. Keeps you alive a little bit longer.

Bleak venom – Cloud kiss (lethal)
These are, in my opinion, just the icing on the cake.

Sierra madre martini – Buffout
These items gives you a ton of endurance (which enlarges your health points) and a fair amount of raw health points.

Weapon repair kit
ALWAYS have a repair kit on you, not sometimes have one, not every once in a while have one.

Turbo
If the fight is going badly, might be useful to use it.

This time I tried to make the guide a little bit more short, but I’m not sure if I really accomplished that. So lemme know if you liked this guide in the comments below, and if so, more or less than the other ones I have made. Give me feedback so I can make better guides.