I’m trying to be a professional, don’t bother me.

There are four different settings in “Back Off, Barbarian!” that is known currently. I will give you pictures, where it is, and what type of enemies are there.

The fire world uses molten rocks as the floor, with some lava instead of the usual water in the other settings. The enemies here are the fire demons. The screenshot below shows me and some other players running away from a fire demon.

This world consists of mostly snow blocks, with some frozen water blocks, too. One snow world setting has a small castle in a corner of it. The enemies here are the Eskimos, also known as the Ice-Skimos. The screenshot below shows me hiding in the corner of the world without the little castle, while the other players run away from the Ice-Skimos.

This is last setting in “Back Off, Barbarian!” so you can go ahead and pat yourself on the back for already reading this far. Good job! Anyways, this setting is inside the castle where you start in the Story Mode. It can also be on the outside doors with some grass and some stone and wooden blocks for the doors and walls. The enemies here are the Barbarians. The screenshot shows me in the setting with the outside castle doors and with me and some players by a Barbarian.

Just incase you don’t want to go back to Part #1 and check and see each enemy, I’ll list them here. I will say what setting they appear in and what they look like to the best of my ability.

Also known as the Ice-Skimos, these enemies appear in the Snow World levels. They wear a white and blue hoodie with black shoes and black pants.

These enemies appear in the forest settings with a big brown mask with big horns and a warrior armor. Mostly brown and peach clothing all over his body. He also has black pants and grey pants.

These odd-looking characters show up in the Lava World levels. They have yellow eyes with red clothing and red cat-like ears. They also have giant teeth that take up around half of their face.

Here are other things you should know about “Back Off, Barbarian!”

If you’re in co-op while playing “Back Off, Barbarian!” you might see one of the players die. So, that player is gone until the next round, right? Wrong. After a few seconds of a player’s death, a red potion appears. If you get the potion, the dead player will spawn back into the game. But, if you don’t get there in time, the potion might dissapear. So, if you see it, try to get it quickly! 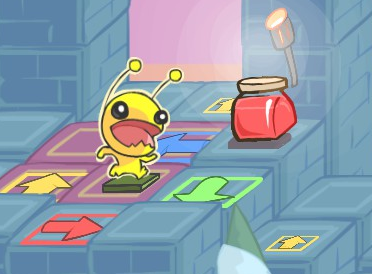 When a player dies, another thing also happens. A little meter with a sad face at the top shows up on both sides of the screen. If you don’t get to the life potions in time to revive the dead player, the meter will get to the top and you will die as soon as it does. All the more reason to get the potions! 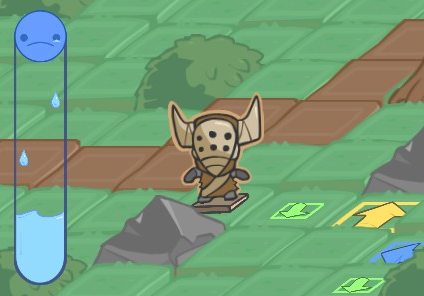 Before an enemy spawns, a red X is seen. It flashes three or four times, and then an enemy crashes down onto the ground. So if you see a big red X, stay clear of it or you might get killed. 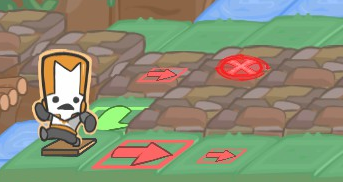 Thanks for reading my guide. It took me a total of two and a half days to complete. If you have any more questions or if you think I messed up on something, go ahead and say it in the comments section below. I want to make this guide as informational as possible, so please give me feedback. Make sure to get this a five-star rating, because we need people to know all the information about this Castle Crashers minigame. So, thanks for reading this, and see you guys some other time!