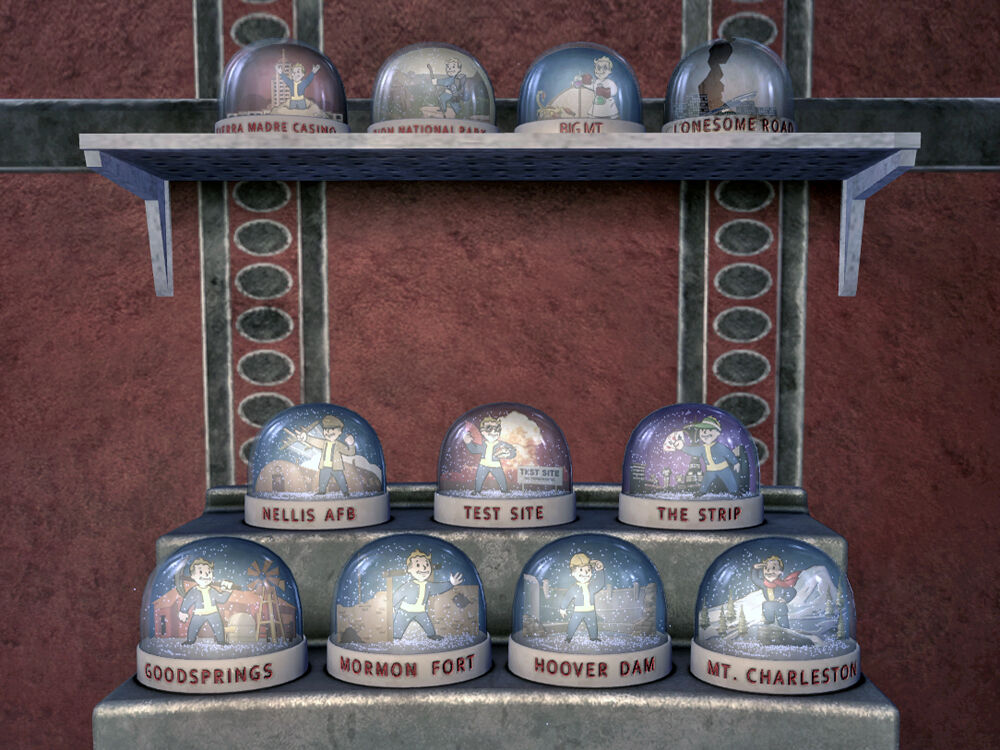 A simple and helpful guide in grabbing a hold on every Limited Edition Mojave Landmark Snowglobe found throughout the Mojave wasteland,and it’s DLC areas!

🎰What is a snow globe and why should I collect them? 🎰 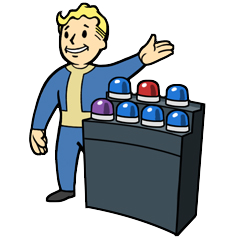 Throughout the Mojave, 7 snow globes are scattered across the map, with 4 more found in the downloadable content maps. They are all the same size, with variations of what’s in them depending on which part of the map they are found. Unlike the bobble heads found in Fallout 3 , Fallout 4, and Fallout 76 , the snow globes in New Vegas give you no additional stat or S.P.E.C.I.A.L. boosts.
So why collect them? Each Snow Globe is worth 2,000 caps! only one specific buyer is found within the Mojave: Mr Robert House. 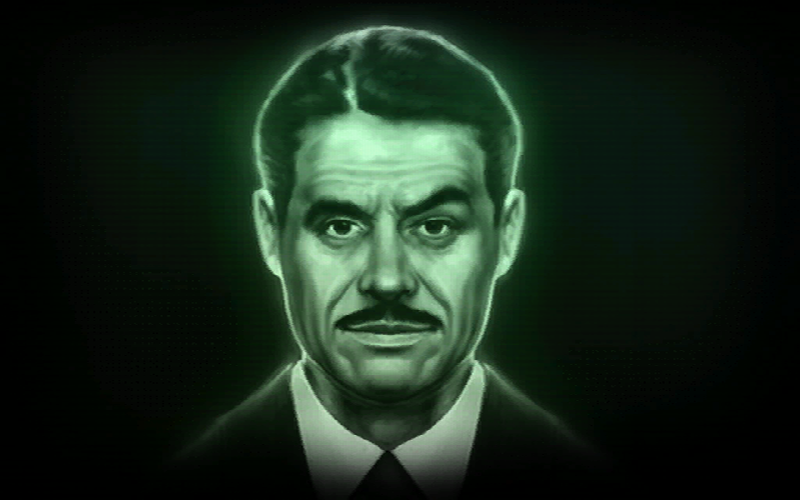 To sell them to House, talk to Jane at the Lucky 38. she should be standing close to the Elevator on the Penthouse level of the Lucky 38. She will sell you 2,000 bottle caps per globe.
If House Dies, Jane will disappear, making it impossible to remove the globes from your inventory. However, opening console and entering ” player.placeatme 00116a50″ to place Jane at their location. the command “stopcombat” will also help in case she spawns hostile, since you murdered her boss. 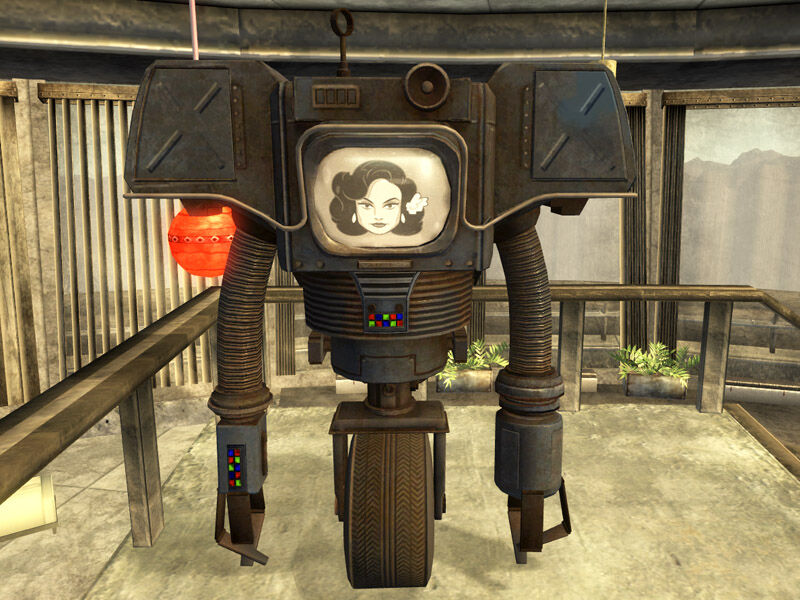 in each DLC, the caps will be automatically dropped into your inventory (barring the Dead Money DLC, when you capture the Sierra Madre snow globe, you will instead be rewarded with 2,000 Sierra Madre chips. Once Bought or Transferred, the Globes will leave your inventory and place themselves on the stand inside the Presidential Suite floor of the Lucky 38.
Furthermore, once obtaining each globe in the base, one will unlock the “Globe Trotter” Achievement. The four found in the DLC add-ons are not needed, but who doesnt like a dose of 2,000 bottle caps?

The following guide will help give you a hand to finding each one!

The Seven Snow globes in the base game can be found in the following locations.
Included in each entry is the base ID for each globe, in case you need to add it in through console commands. Note, Once console is opened and entered, achievements are unable to be obtained until restarting the game. 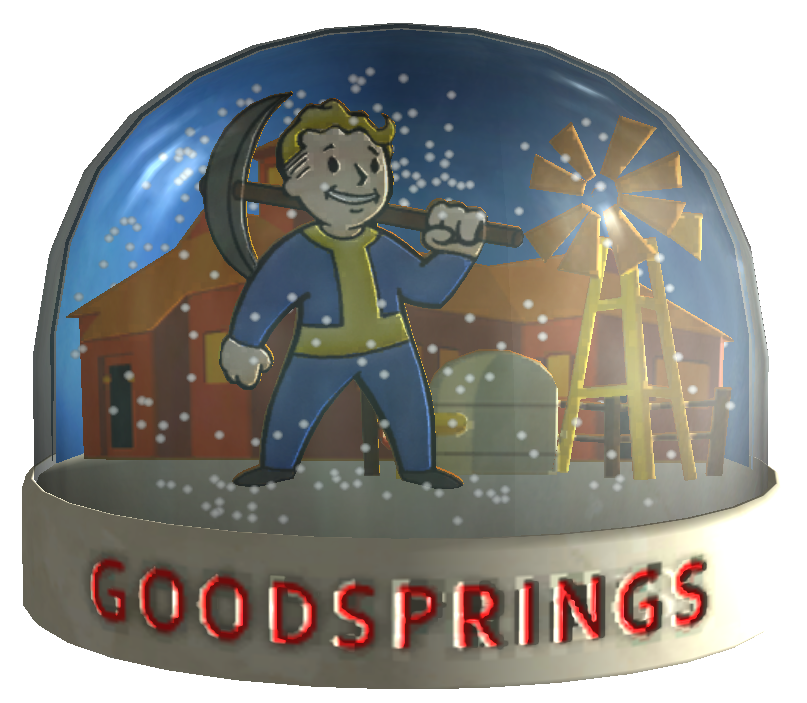 The Goodsprings snow globe can be found just north of Goodsprings in the Goodsprings Cemetery. Close to the water tower is a rectanglular gravestone with the globe leaning against it. 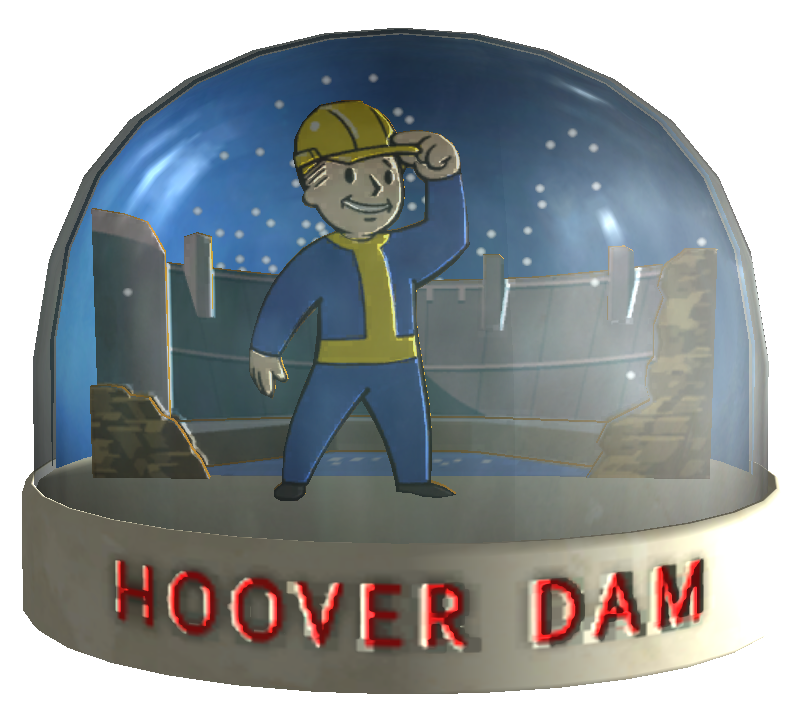 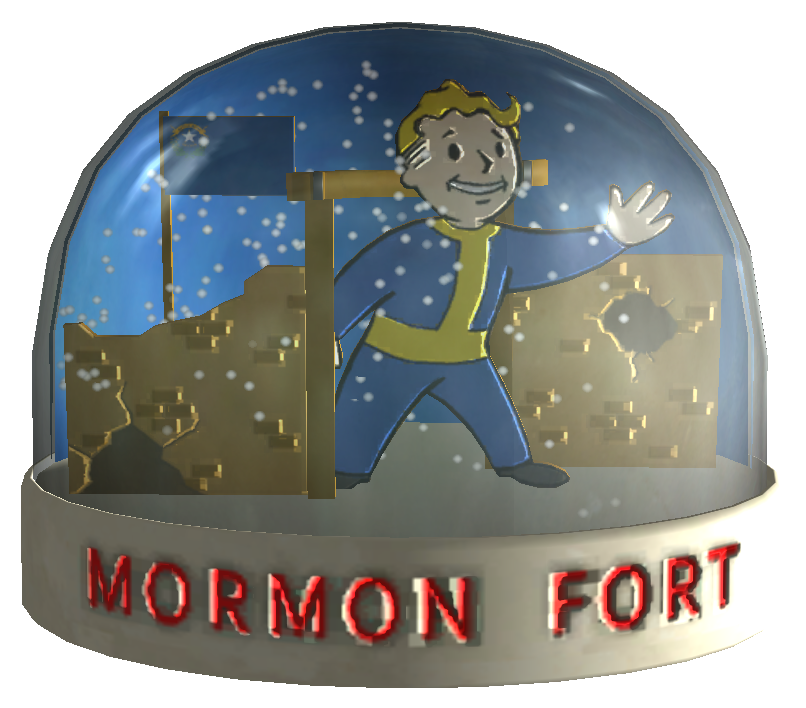 ID:0015DB37
The snow globe for the Mormon Fort is found in the western tower of the Old Mormon Fort, marked as Julie Farkas’ office. the globe is located on top the wooden bookcase 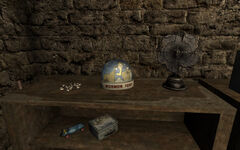 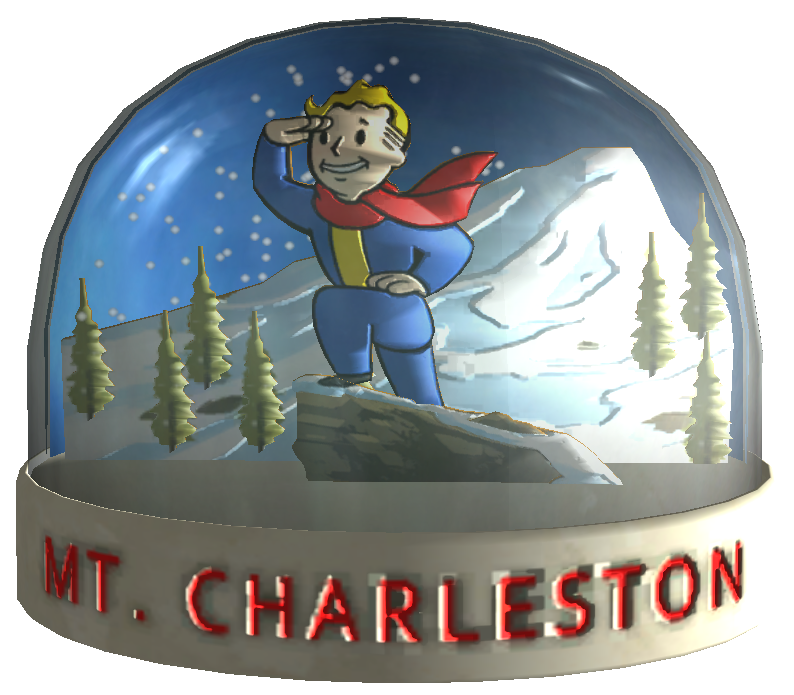 ID:0015DB38
The Mt. Charleston appears in the massive lodge inside Jacobstown. In the lodge’s reception lobby, the snow globe sits on top of the large desk, near the lobby terminals. 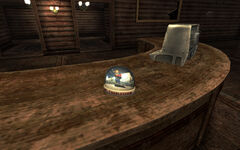 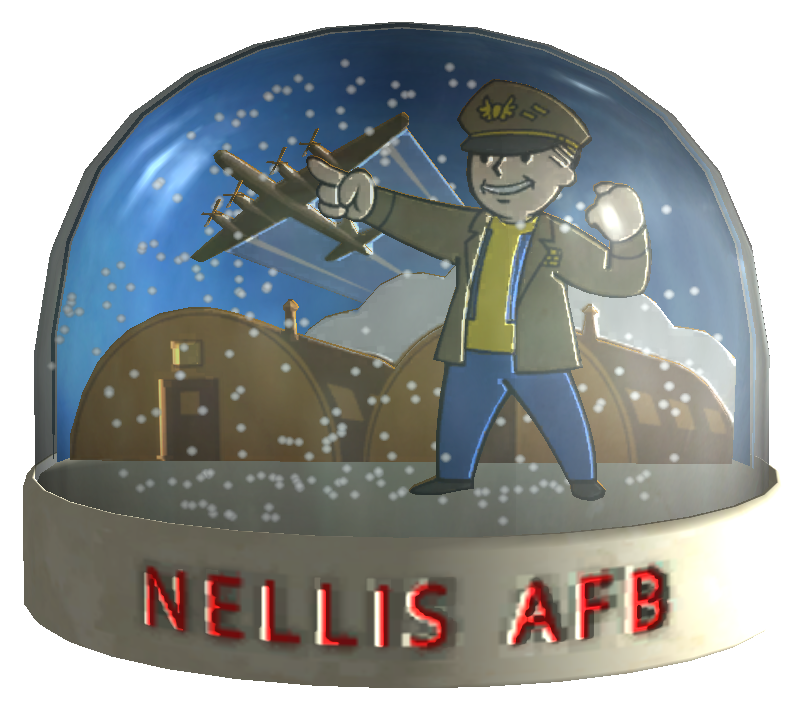 ID:0015DB3C
Once Dodging the ordinance and making your way into the Nellis Air Force Base, head to Pete’s “museum”. The Snowglobe is sitting on the table to your immediate right, once you enter the museum. 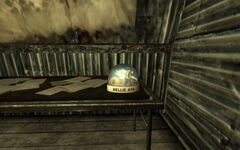 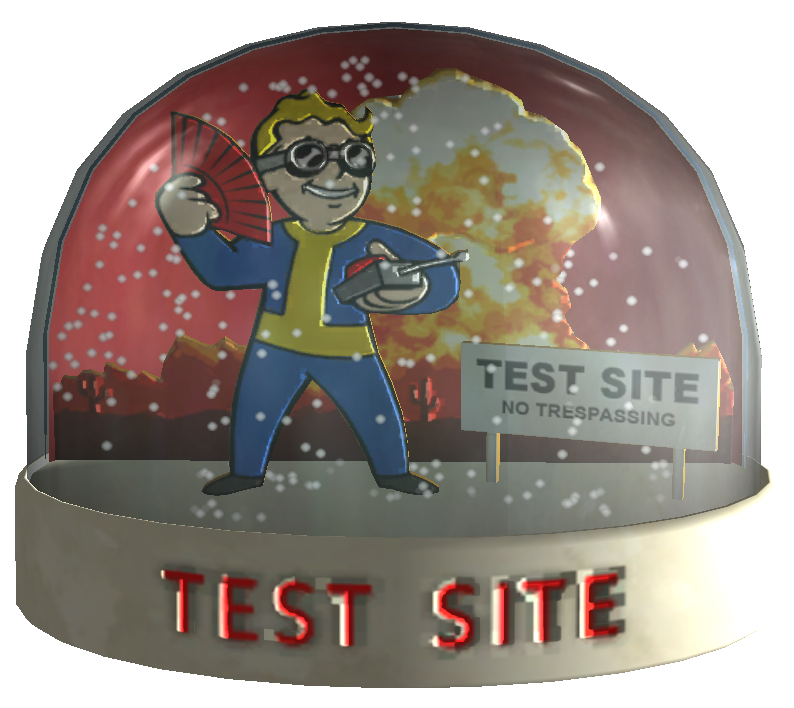 ID:0015DB3B
The snow globe for the Nuclear Test site is actually located inside the Lucky 38. Once speaking to Mr House, the snow globe can be found in the Cocktail Lounge floor of the Lucky 38. Located next to the green lamp and bar taps, the snowglobe is sitting behind the middle cash register. 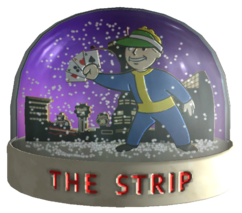 ID:0015DB3D
Located inside Vault 21, the snowglobe is located inside the locked bedroom of Vault 21 manager Sarah Weintraub. Access to the room is found through either pick pocketing Sarah of her room passcard, or passing a Lockpick skill of at least 50. Between the two beds located on a small table, the 7th snow globe is located! 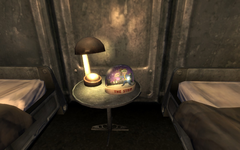 The last four snow globes are found in the Downloadable content that can be added into the game. each DLC has one globe in it. 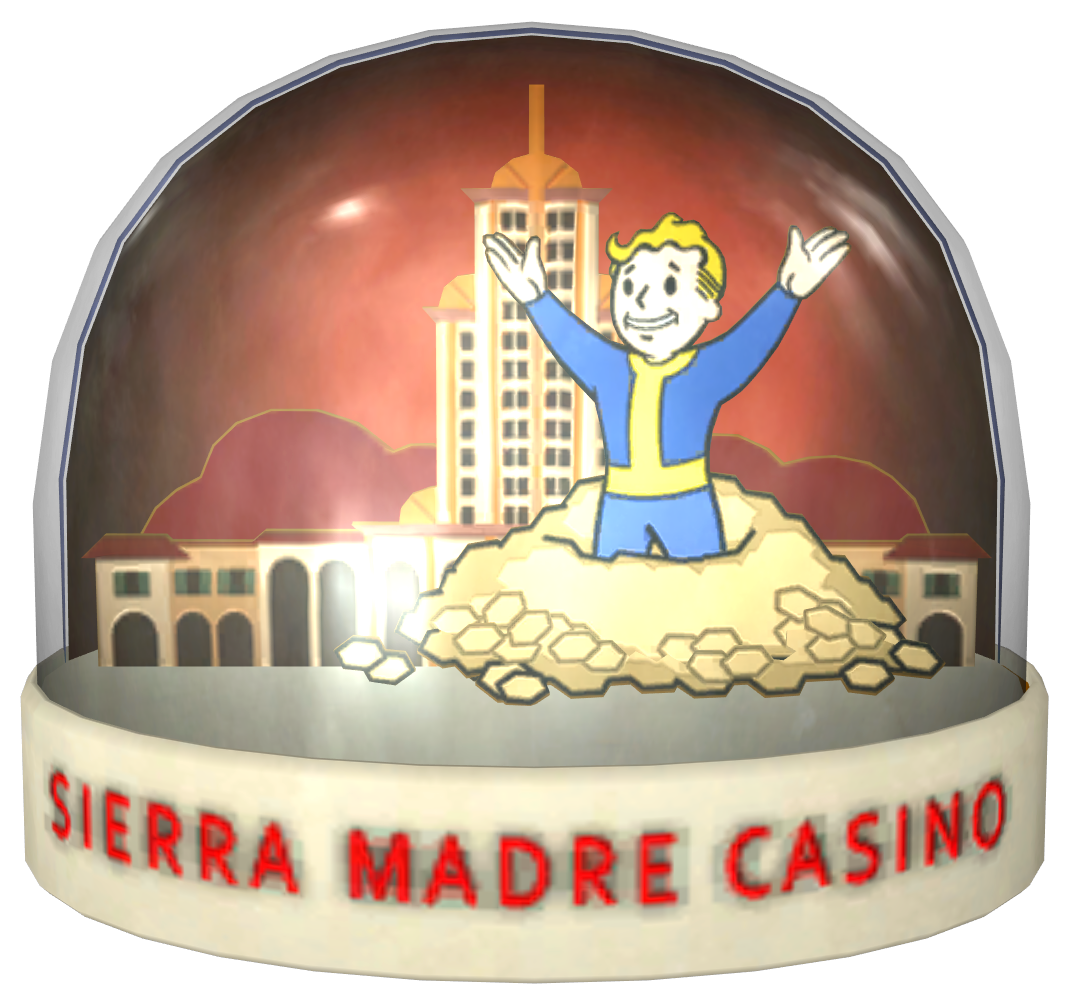 While walking the Northern Section of Salida Del Sol, finding the southernmost entrance to the Southern Half, go up a set of staircases to gain access tot he rooftops on the west. there should be a hole in the wall. on top a crate by a pile of desks will be the Sierra Madre Casino snow globe.

Unlike the other DLC globes, once you complete the Dead Money DLC, this snow globe will be inaccessible. It is important to grab this globe before completing the rest of the Gala Event quest line. Instead of Snow, the Sierra Madre snow globe has the cloud,fitting for the DLC itself. 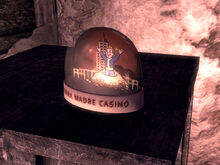 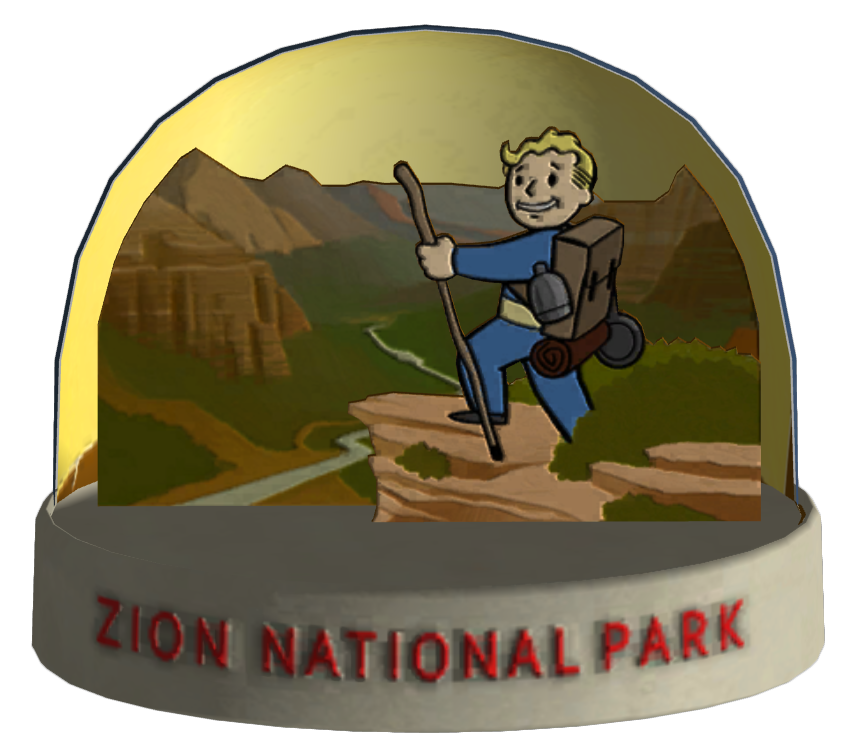 In the Northwest of the Zion valley is the Zion General Store. after disposing of the hostile creatures, the Zion Valley Snow globe is found on the bottom shelf the cabinet behind the counter with the cash register,found once you enter. 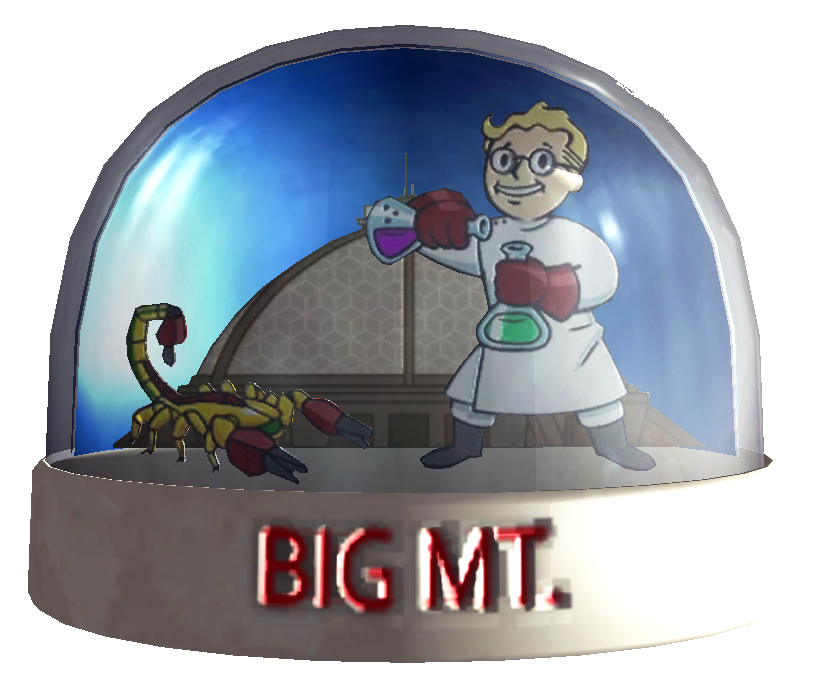 Inside the Big MT, the X-17 Meteorological station houses the Big MT Snowglobe. the Station is located in the northern part of the map, sandwiched between the construction site, the Signal Hills transmitter, and the X-22 Botanical Garden. Once you enter X-17, follow the catwalk from the replica model of Higgs Village. the catwalk leads to the test terminal. opposite the entrance to the room, the snow globe is sitting on top a computer console. 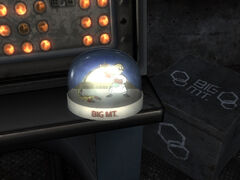 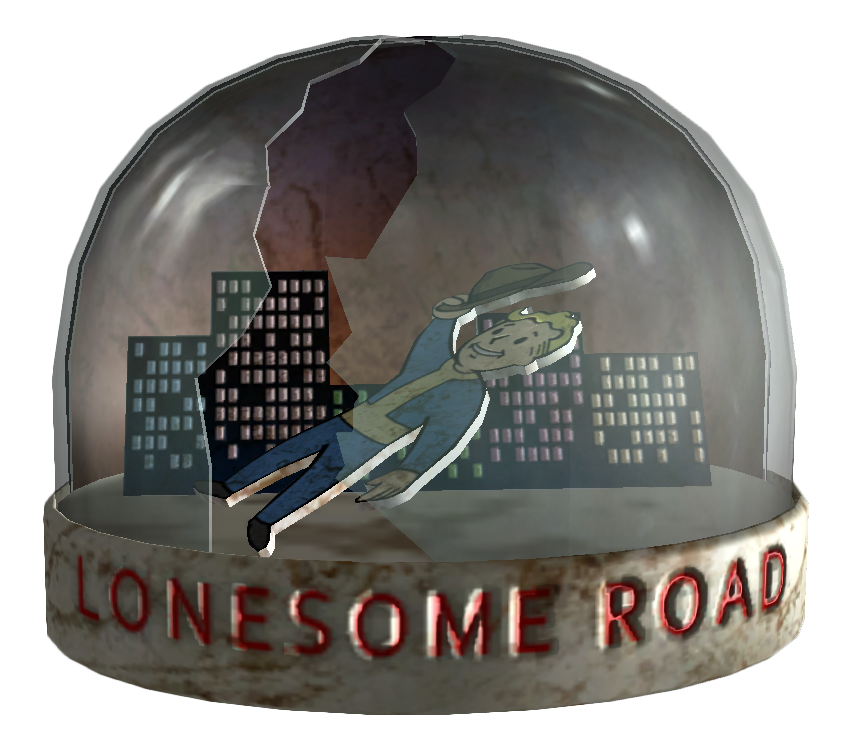 ID:xx004687
The Snow globe for the Lonesome road can be found at the Junction 7 rest stop. Found at the end of the High Road, Junction 7 is near the west of the fallen overpass. inside a the damaged building, the equally damaged snow globe can be found on the second floor in a turned over shelf, beneath a sign of graffiti stating “Give peace a chance!”

Once you’ve found all 11, Congrats on completing the entire collection of your Limited Edition Mojave Landmark Snow globes!

Good Luck and Happy Exploration as you patrol the Mojave and wish for a Nuclear Winter!