Hi! I will show you a way to finishing the Volleyball level in 1-2 tries – Solo or Multiplayer.

Well recently, a player added me asking for help with the Volleyball level and that reminded me of my own countless failures before completing this level.

Since it is technically a “boss fight” in which you must complete the level to progress in the game, there is no way around it.

You will fight against 4 Saracens (Sand guys) and no it is not impossible.

Now moving onto the main strategy, this will work with solo and multiplayer mode.

Solo:
Since you are on your own, you are solely responsible for returning the ball. Hence if the ball flies into the back end of your court, you will be at a slight disadvantage as opposed to having a proper team.

1. Before starting the match, stand at the right edge of your court and use your magic splash damage to hit 1-2 of the enemies. The splash attack will stun the enemies multiple times.

2. Immediately after using the splash attack, run back and hit the ball into their side.

Splash attacks such as Pink knight’s Rainbow attack will stun the enemies 2-4 times over around 2 seconds. Therefore only half of the 4 enemies will be able to return the ball thus greatly increasing your chances of scoring a point.

3. Continue using the splash attack to stun enemies right before hitting the ball back. If they score, leave the ball sitting in your side of the court and repeat Steps 1 and 2.

Multiplayer:
Half the team use the splash damage, the other half stand in the back of the court and return the ball. 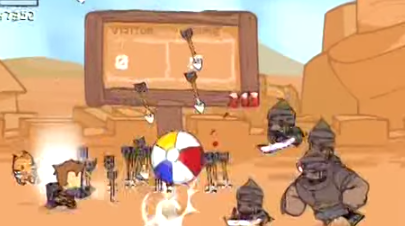 Now I understand that most people would have already completed this level but hopefully this guide will save new and old players some time when playing through a new character.