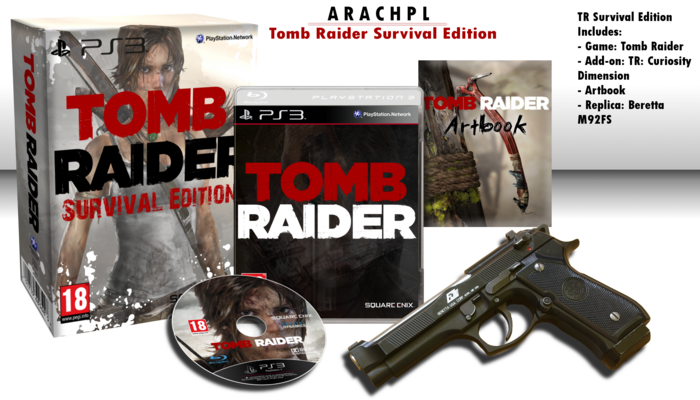 A guide meant for those willing to buy Tomb Raider games, but who are not sure which edition or DLCs to pick. Also, a few tips on how to save the most when getting additional content.

Most of us are willing to begin with the most recent title within Tomb Raider history. Considering this possibility, we have to face our first choice picking one out of three options.

It’s easy to have doubts considering that these three items always go one sale at the same time. Usually, when a customer is willing to buy Tomb Raider, he is able to pick any of these three possibilities, since their prices don’t differ so much when under 75% discount. GIven this data, which one is the righ one for me?

Tomb Raider is just the base game. No DLCs, no extras. Ideal for those that came just for the ride, to enjoy the atmosphere, sthe story and the main character. Eventually, if one gets interested, he or she may buy a few extra content to further increase experience in a long term.

The Survival Edition of Tomb Raider, includes not only the base game, but a few extra content. The key feature, is that part of its content is not obtainable any other way.

Tomb Raider Collection includes the history of Tomb Raider through 10 canonical games. The best choice for BUNDLE LOVERS or GAME COLLECTORS who want to make the most of their money within only one shot.

But what is the drama, then? The point is: survival edition is NOT INCLUDED in ANY PACK! If you want to officially possess EVERY extra content for Tomb Raider (2013) you have to earn it the hard way: buy TR: SE once, then buy every single TR title, thus paying double the original amount of money. So what do you prefer? Make the most in one go? [Tomb Raider Collection] Have a special distinguished edition of Tomb Raider? [Survival Edition] Check next section!

If you check the steam store, it clearly states 6 items under Survival Edition. However, the store is not clear and can’t offer you a complete idea on how these contents are going to be offered and presented to you. Here’s the deal, then: two of these items can be bought by anyone from the store. The other four are EXCLUSIVE, and can only be obtained from buying Tomb Raider: Survival Edition.

As you can see, nothing special regarding file formats. Standard PDF files (though high quality), plus Soundtracks surprisingly in Wave formats. It’s nice to say that together ithey fit in a standard USB flash drive or in a 2GB memory stick.

“Guerilla Skin” in-game outfit – it’s important to say that if you own Tomb Raider (standard) the best way to get this outfit is from buying Tomb Raider: Outfit Pack (1). It’s a pack filled with 3 outfits for a discounted price. A steal when under 75% discount. Here is the link: [link]

Three in-game weapons from “Hitman: Absolution” for use in “Tomb Raider”: The Silverballer, Agency SPS 12, and HX AP-15

Again, with you own the standard edition of TR, these 3 weapons can be bought separetly, but it’s better to buy the Tomb Raider: Hitman: Absolution Weapons Pack 1. Link:
[link]

I’m providing you these links since they cannot be found under TR’s store page. They are found only through careful searching. There are also a few items that remain unlisted for now. I’m going to show you below.