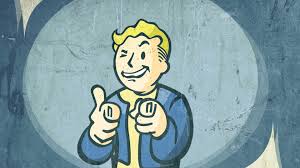 A simple guide for a powerful character; so you don’t have to get bogged down about what to get and focus on enjoying the game!

I’m the kind of player who likes to completely beat a game. For Fallout 3: New Vegas, this means winning all (or most) speech-checks, opening every lock and safe, and buffing every companion. I also play the game on Very Hard and Hardcore, which can be a bit tricky at times.This game is mind-bogglingly complex with the sheer number of avenues in which to approach every situation (and the amount of bugs if you do something in a very specific way!). This is by no means the end-all be-all of guides so if you feel there’s a better way of doing something then do it!—but this really helped myself out in creating a plan on what to get so I didn’t have to spend all of my time worrying about what to get and actually enjoy playing the game.

I know there some people who claim that luck is an amazing attribute, but its not. Here’s my S.P.E.C.I.A.L. build: 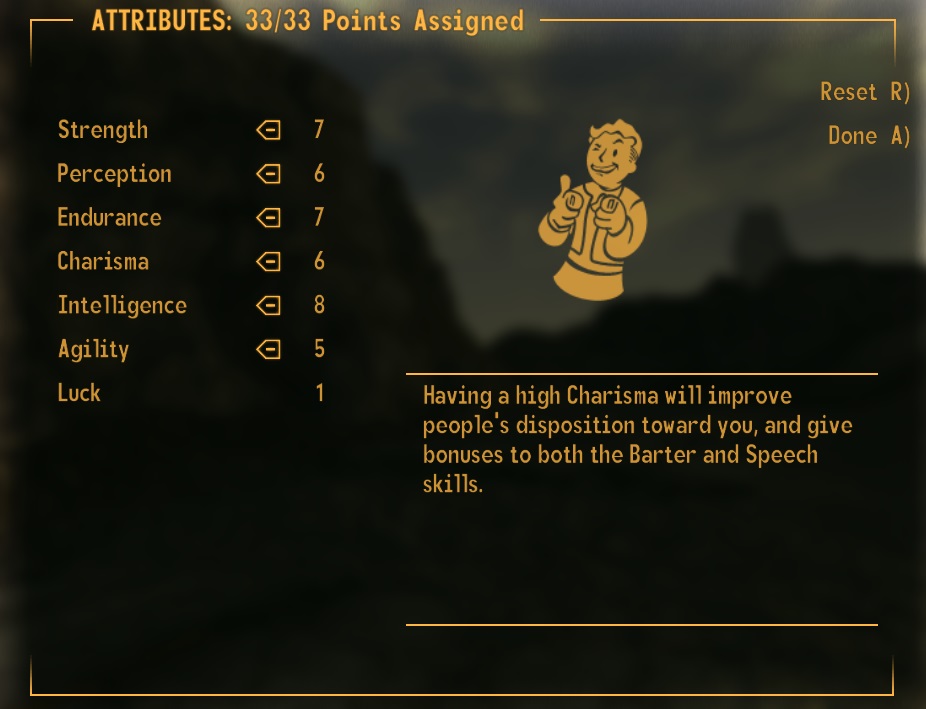 This gives decent carry weight, health, and companion nerve. The goal here is to get your companions early and use them as meat shields so you can continue to sink points into speech-check skills and not have to worry about dying against 2 cazadors, etc. This build also insures that you can get pretty close to maxing out almost every skill and meeting attribute requirements for almost every perk. The one draw back is that until you get the Finesse perk at level 10 you’re almost never going to get a crit., and also good luck trying to win anything at The Strip. But there are so many other ways to make money in this game, it shouldn’t be a big deal.

This build doesn’t actually differ too much from the Jack of All Trades build, the only difference is substituting LUCK with CHR. And while CHR is mostly considered a dump skill, I do find value in the +5% of damage and health in your already beefy companions (for a total of +30%) compared to the mere +1% crit. chance that each SP of Luck brings (in addition to the +1 in all stats per 2 SPs put into it). And with the Finesse perk, you get the best of both worlds with a +5% to crit. The other downside to a CHR of 1 is that even if you wanted to, you couldn’t get the Animal Friend perk that effectively renders mutated animals harmless (i.e. Deathclaws will never give you trouble so you can roam much more easily). It really boils down to playstyle: if you like the lonesome road of being a badass, having a CHR of 1 and a LUCK of 6 is better. While if you like having a 2 man army behind you, then a CHR of 6 is arguably better.

Next, my tagged skills: 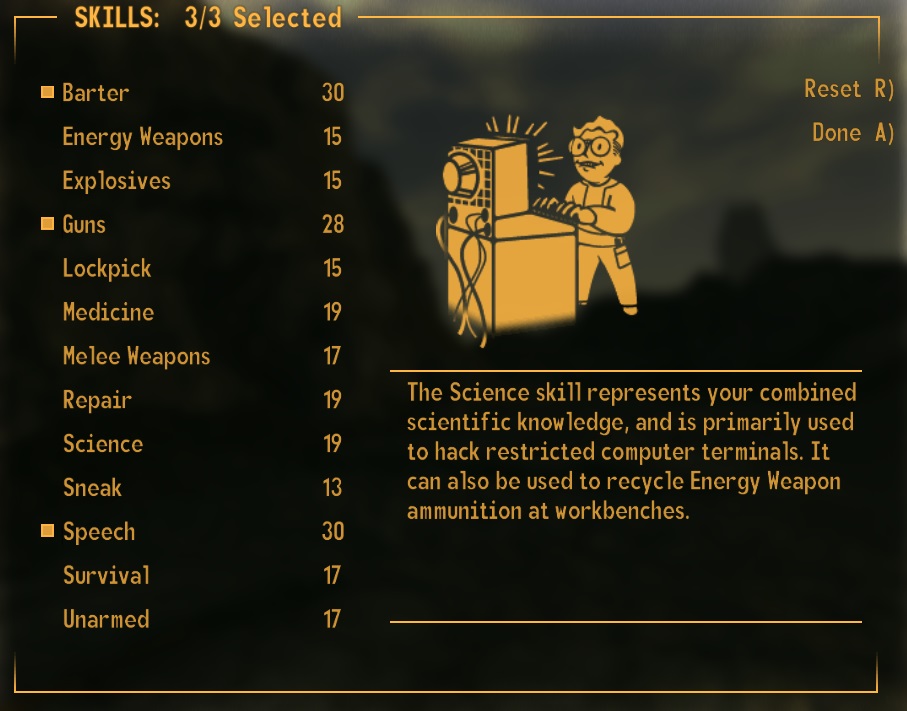 Now, if you’re like me, I tend to horde a lot of aid items while carrying a few weapons, some armor, etc. so I don’t normally drop down below 140-160 carrying capacity even after I sell unwanted items. Both companions help, but tagging Barter helps you get the 70 Barter required for the Pack Rat (INT 5, Barter 70) perk at level 8, which clears up quite a bit of space for ammo and whatnot. The other two tags are player preference, I personally like guns (so you can get some damage related perks early) and speech (for any early speech checks you may encounter) but having science, medicine, survival, and lockpick are also nice to have. Or even getting melee is fine if you know a location of a great melee weapon like the “Oh Baby!” near Jacobstown. 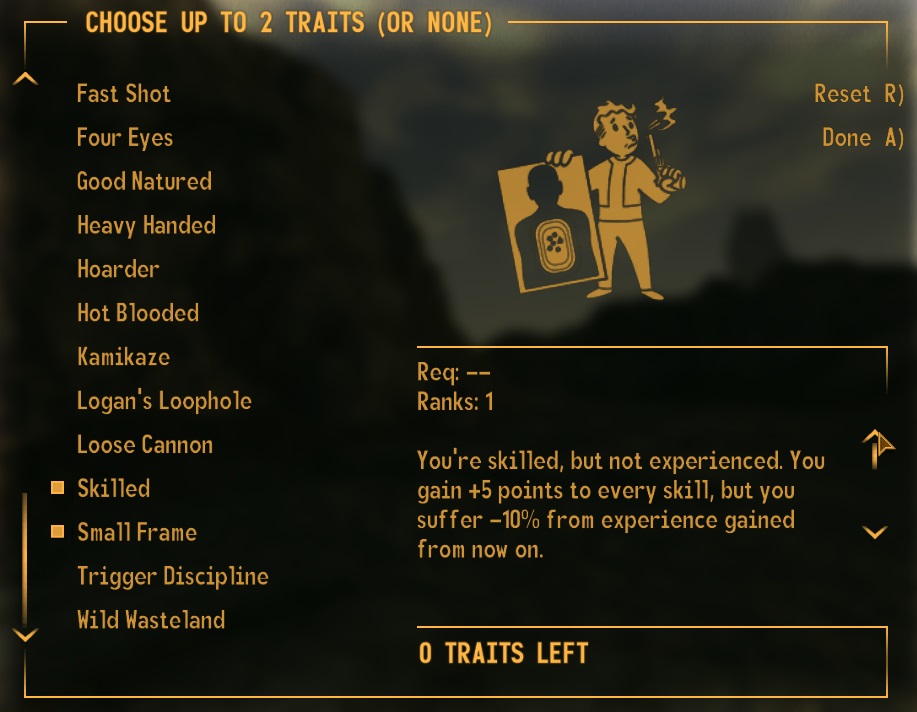 For the purposes of this build, the two best traits are Skilled and Small Frame. A permanent +1 to your AGI plus your base of 5 allows you to get almost every AGI related perk without having to change the build or see Usanagi. Also, after getting your limbs crippled (which is pretty damn easy in Very Hard!) 50 times you get the Tough Guy perk, making this the only trait to have its negative side effect almost completely negated through just playing the game. You could also get the Four Eyes perk for a +2 to Perception, but gives a permanent -1 to your PER when you’re not wearing your glasses. Having the Skilled perk just makes everything early game a bit easier and is intended to help achieve maxed skills late game, with the stipulation of -10% exp. for the rest of the game; but in a RPG designed to have a few thousand hours put into it, what’s the difference between a few hundred giant radscorpion kills?

With such a high INT build, NEVER, max out any skill to 100 because inevitably you’re going to find several skill books for that skill while going through the game. For leveling skills, I generally tend to go to 75 and worry about the level 100 checks later. I put skills in order of importance as such:

And the skills that hardly get any points until everything is maxed (that is, unless you want to be the stealthy Fat Man shooter):

That being said, plan the skills you put points into towards the perks you want to get or that you know you need/will need in the near future. Towards late game, you should try and get every skill at least to 90 so that if you ever need a 100 level speech-check, you can read a magazine and be good to go.

The perks I chose are intended to maximize damage with versatility (there are quite a few of useless perks). But instead of listing off all of the perks I personally got, I’ll list perks in order of how useful they are. The first 10 levels however should stay relatively the same despite whatever play style you’re going for. After level 10, it’s really a mix-and-match of what’s best at the time and what you have the prerequisites for (but since you followed the S.P.E.C.I.A.L. build above, for the most part you just need to hit that perk’s level prerequisites).

Everything Under “Very Useful” are arguably the best perks in the game, and should almost always get picked up throughout the course of a play through.

The “Very Useful Situationally” are perks that are very beneficial in and of themselves, but work most effectively in tandem with two or three other perks. Such perks are grouped together by what they effect. Also, these groupings of perks are the most influential on play style as they effect active actions/skills/weapon usage. These perks are weapon damage/V.A.T.S. related.

The “You Decide” category is relegated to everything that is really nice to have, but something I wouldn’t consider a necessity. You can’t have everything, so pick carefully if you decide to get any of these third-string perks. These perks are more passive related.

The “Somewhat Useful” perks aren’t necessarily good, but are more like “help you sleep at night” perks. For example the Animal Friend perk doesn’t really change your play style because 99% of the time you’re going to want to kill the animals anyway, but Deathclaws will never wreck you when you’re exploring.

The “Useful Situationally” are skills that I wouldn’t recommend individually, but are useful if heavily committing to a very specific play style.

The “Low Usefulness” category aren’t the bottom of the barrel per se, but are no means any good in a “serious” character. I reserve this category for perks to get if you want to d!ck around.

The “Never Get” category should be pretty self-explanatory. These perks effectively waste precious slots that can be easily circumvented, place limitations on the positive aspects of the perk, or simply undermine the pleasure of the game.

There are also some skilled that are bugged (or so I hear). Better avoid these perks if possible:

So what does it mean to have a LUCK of 1 in New Vegas? Well for starters, you will almost NEVER win gambling, so don’t even bother. Probably about 80% of the time you’ll proc. the “you feel unlucky” message, which means your low LUCK made you lose, not by chance. How do we combat this? Well, there are a multitute of ways.

Finding snowglobes is really easy, but you can only make 12k max by collecting all of the snow globes.

Going to the Lucky 38 and searching the casino floor can give you quite a lot of Old World money.

Killing Legion kill-squads can net quite a few Legion Denarius, but can sometimes be difficult to deal with.

Without breaking the bank at the casinos, the easiest way I made a lot of money was by playing caravan. Whenever you rasie the amount bet, the NPC will almost always automatically match your bet to the best of their ability. This means the more money they have, the higher they can raise their bet amount by too.

There are several merchants who have the ability to play caravan: Cliff Briscoe in the Nipton Dinosaur, the Lady in the Mojave Outpost, Johnathon Nash in Novac, among others. The trick is to earn a good sum of money; I would say wait until you have a solid 20k. Go to a merchant and buy whatever you want from them so that the money you have left is even with the amount of money they have. The more money you spend, the more money they have to bet. Once you win all that money, repeat the process. You should be able to take most of their weapons/mods/Aid if you do it correctly. Also note that merchants have a maximum of times they’re willing to lose at caravan (5 times I think), but you losing won’t count towards the cap. Make sure you look at their dialogue before you spend all of your money. I easily won 40k caps and probably 30k worth of goods from merchants using this technique.

How to Stay Alive in the Wastes

How to Win at Caravan