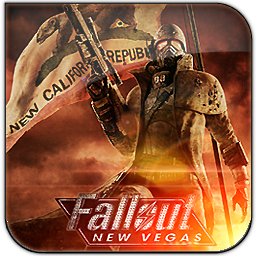 Overview We all know that Fallout: New Vegas is an incredible game as it is, but what if you could improve it? What if you could replace those purple skies or weird faces some characters have with something better? That’s where mods come in.This guide will lead you through some of the best and most popular mods for this game, it will also do it’s best to help with the creation of a bug-free New Vegas experience.So take your time, and enjoy.

To start of this guide, I’m going to describe a mod necessary to run most of the mods here – NVSE.
NVSE can be more easily described as a plugin. It’s function is to add new script functions to New Vega’s Code, creating new paths for mod creators to go through.

Also, the latest version comes with the 4GB patch[www.nexusmods.com], allowing you to allocate more RAM to the game.

Unlike people have spread all over the internet, there is absolutely no danger in installing it, as everything is packaged into a single .zip file. 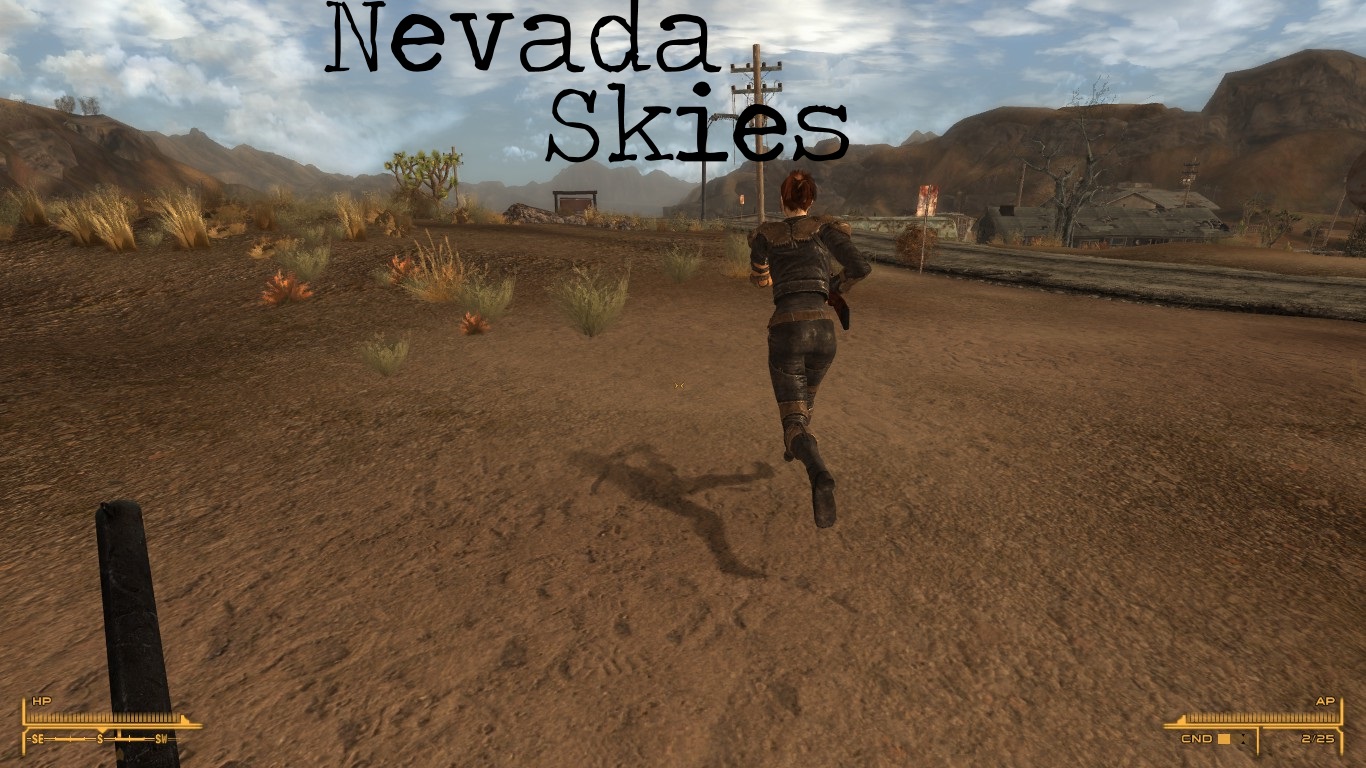 This is the mod that even the purest of purists should think about adding. It makes your game a lot more varied and unpredictable, adding new perks, effects and weather conditions;

So what are you waiting for? Add some flavor to the Mojave Wasteland with this mod!

I love this mod for the same reason I love Nevada Skies; it makes the Mojave feel like a real desert. 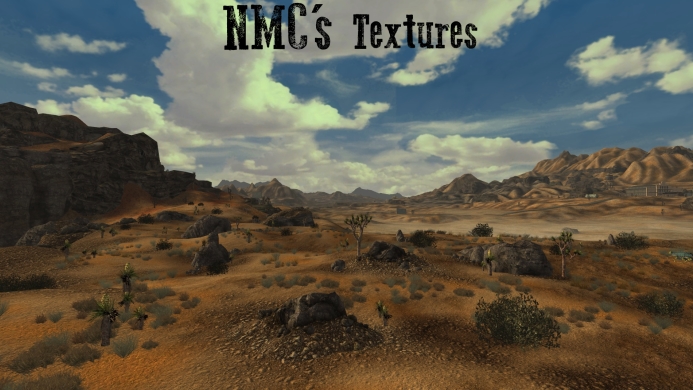 This texture pack overhaul takes the low-res default New Vegas wasteland and breaths new life into it, adding more colors and detail to each texture the game offers, and you know what the best part is? Any PC can handle it.

… Yep, you heard me right

This mod has 3 different variations; Large, Medium and Small, with the the last variation having the same resolution as the regular New Vegas textures. 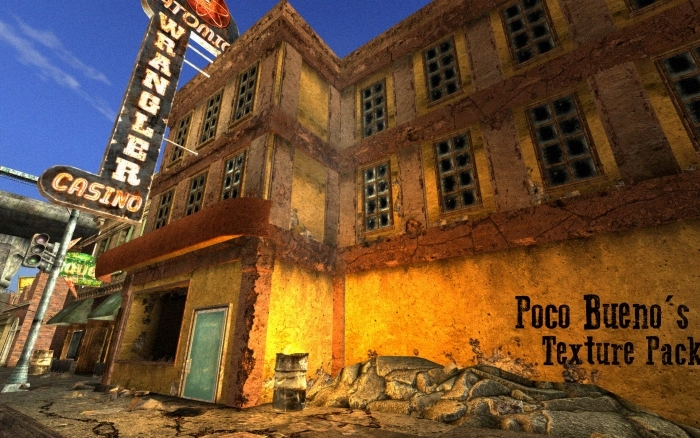 Don’t worry, it’s better than the name implies.
The Poco Bueno Texture Pack is a compilation of all Ojo Bueno’s his prior textures into a single file, optimized and compressed. It retextures objects that would otherwise be left alone by the texture pack posted prior to this one, it includes new textures for buildings, robots, sidewalks and generic objects.

If you choose to use it as an extension of NMC’s work, you may have to overwrite some filmes.

Warning: not compatible with Mission Mojave! Use Yukichigai’s Patch[www.nexusmods.com] instead for this mod.

This is one the biggest mods for New Vegas I have ever seen, it gives each individual NPC a detailed overhaul based on the lore of each character and the voice they have, it also retextures a great deal of details in the game to make it more realistic and cohesive. 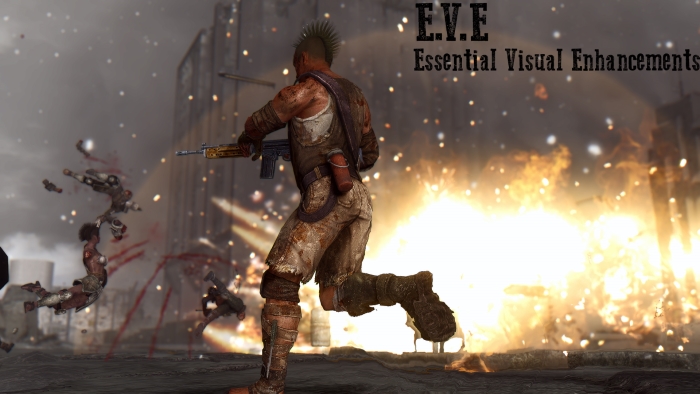 EVE Replaces the old vanilla effects for gore, energy weapons and explosions to something a bit more sophisticated.

It adds more variety to energy weapons, featuring many ones. And unlike other gameplay mods it does not require external script extenders to work properly.

Warning: This mod is incompatible with Nevada Skies[www.nexusmods.com] 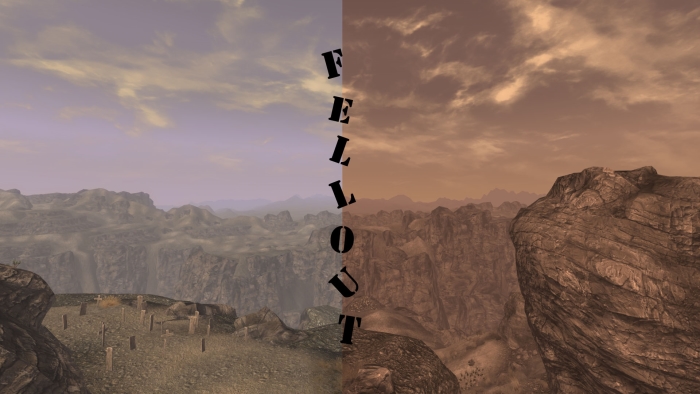 Once upon a time in 2008, a selection of modders disliked the green tint of Fallout 3. So they made their own mod with the objective of shaking up the color palette.
Fast foward to 2010, and you’ll see that they also disliked the orange tint of New Vegas, so they made a new version just for this game.

Why settle just for the cosmetic stuff? 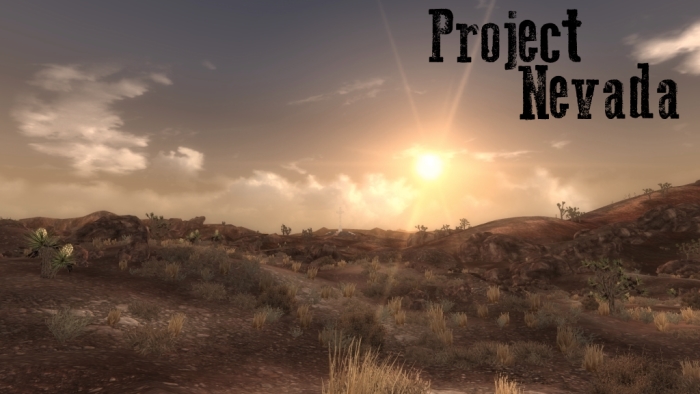 This mod makes the game a bit more like other FPS games on the market, it adds many new mechanics to make the gameplay more fluid. Stealing the words of the developer, it includes:

So basically, this mod will make New Vegas feel more like a modern FPS game.

Not related to the country of Brazil, unfortunately. 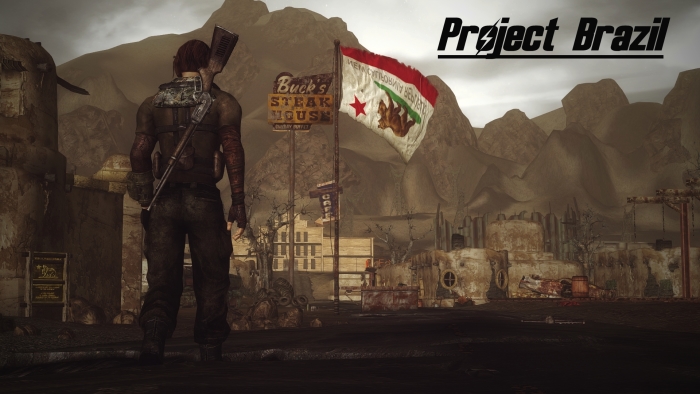 Forget about the Mojave desert, and forget about the Courier. In this mod you’re gonna be a member of the Vault 18 in San Bernadino, fighting your way through the Enclave, Super Mutants and Raiders.

A World of Pain

Now here’s a mod that does justice to it’s name. 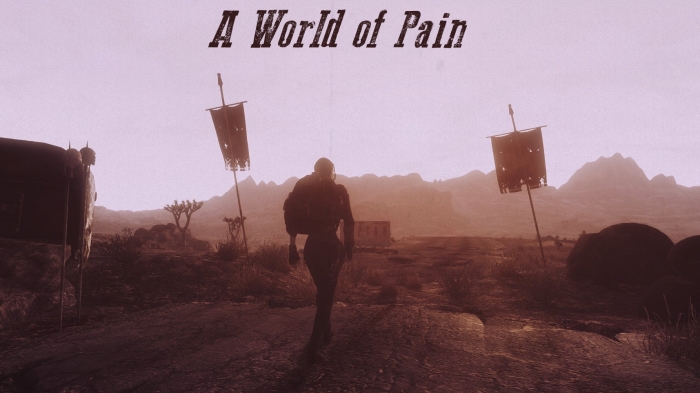 Ever felt like New Vegas was getting a little stale, running out of stuff to kill do? A World of Pain intends to fix that, by adding 114 complete with new enemies, NPCs and fully-voiced dialogue.

Weapons of the New Milenia

The quintessential weapons mod for the gun nut inside of us. 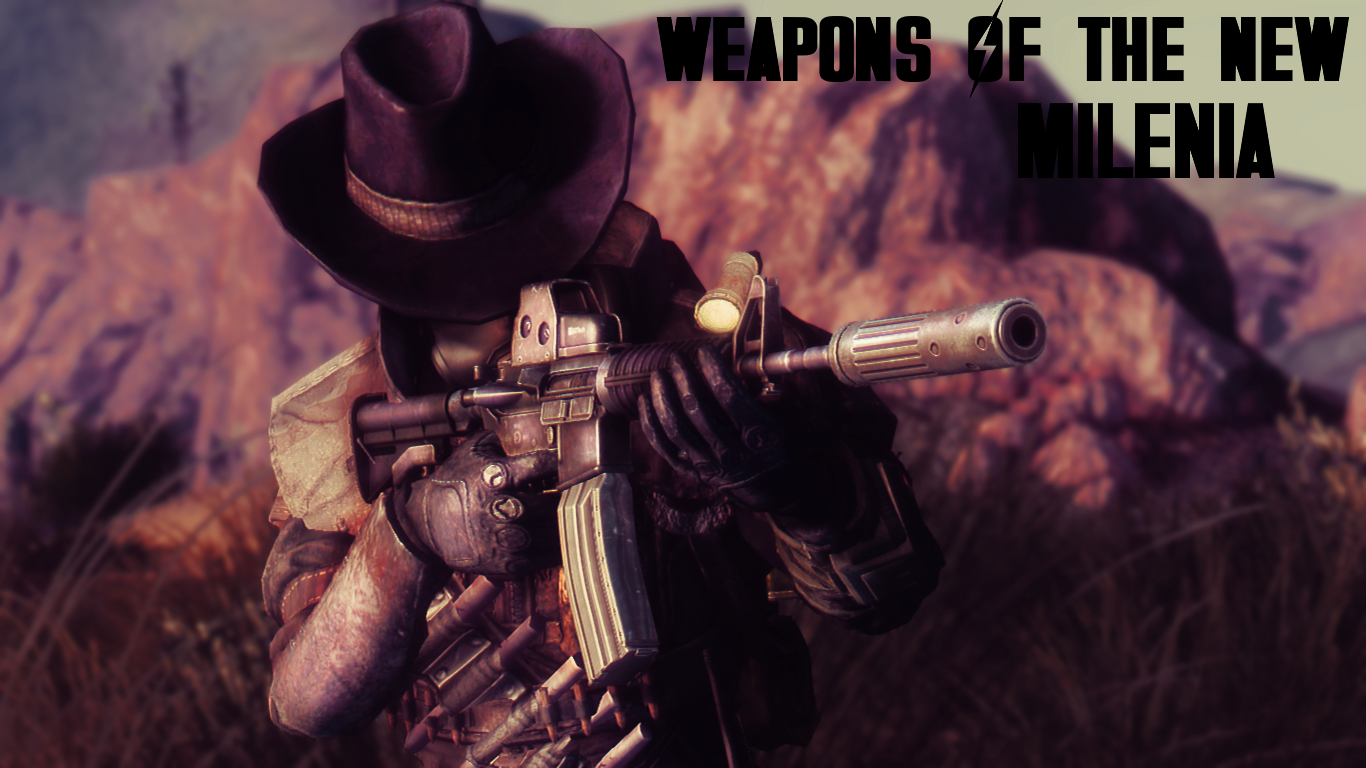 Weapons of The New Milenia is a collection of more than sixty different weapons based on their real life counterparts. AK-47s, Berettas, M14’s, you name it. 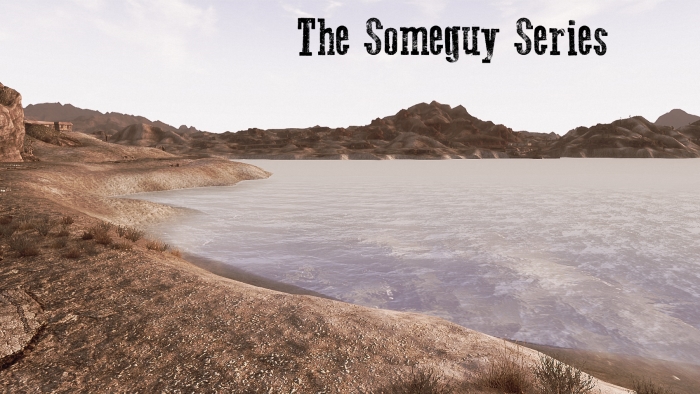 It would be hard to pick just one mod from Someguy2000 to put here, so why not all of them? This collection includes three different mods fully compatible with one another:

Wanna do more stuff? Feel like killing all the wasteland scum you find? Then this series is for you.

A mod so good Bethesda basically made a carbon copy of it for Far Harbor![www.nexusmods.com] After all, imitation is the sincerest form of flattery. 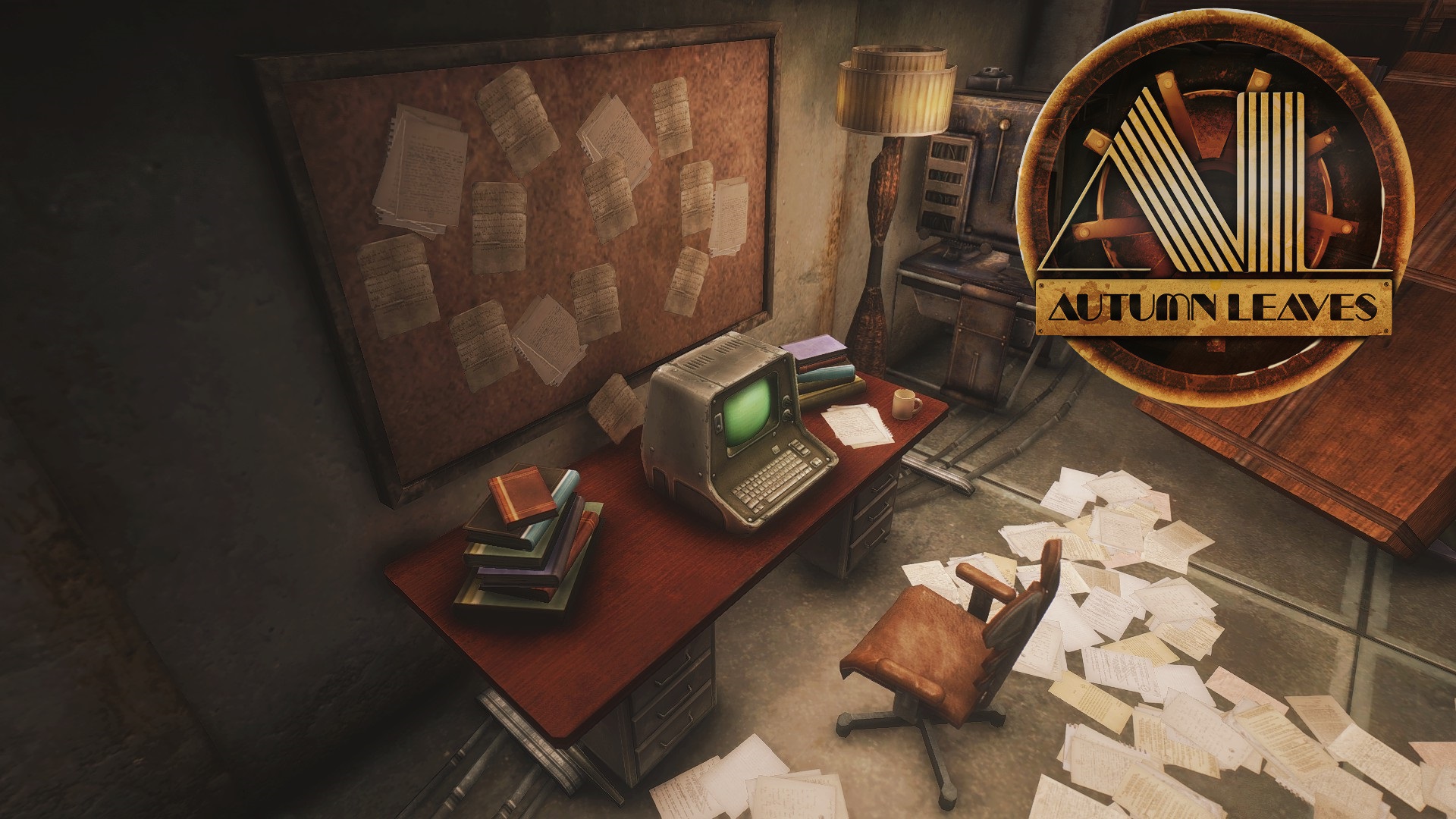 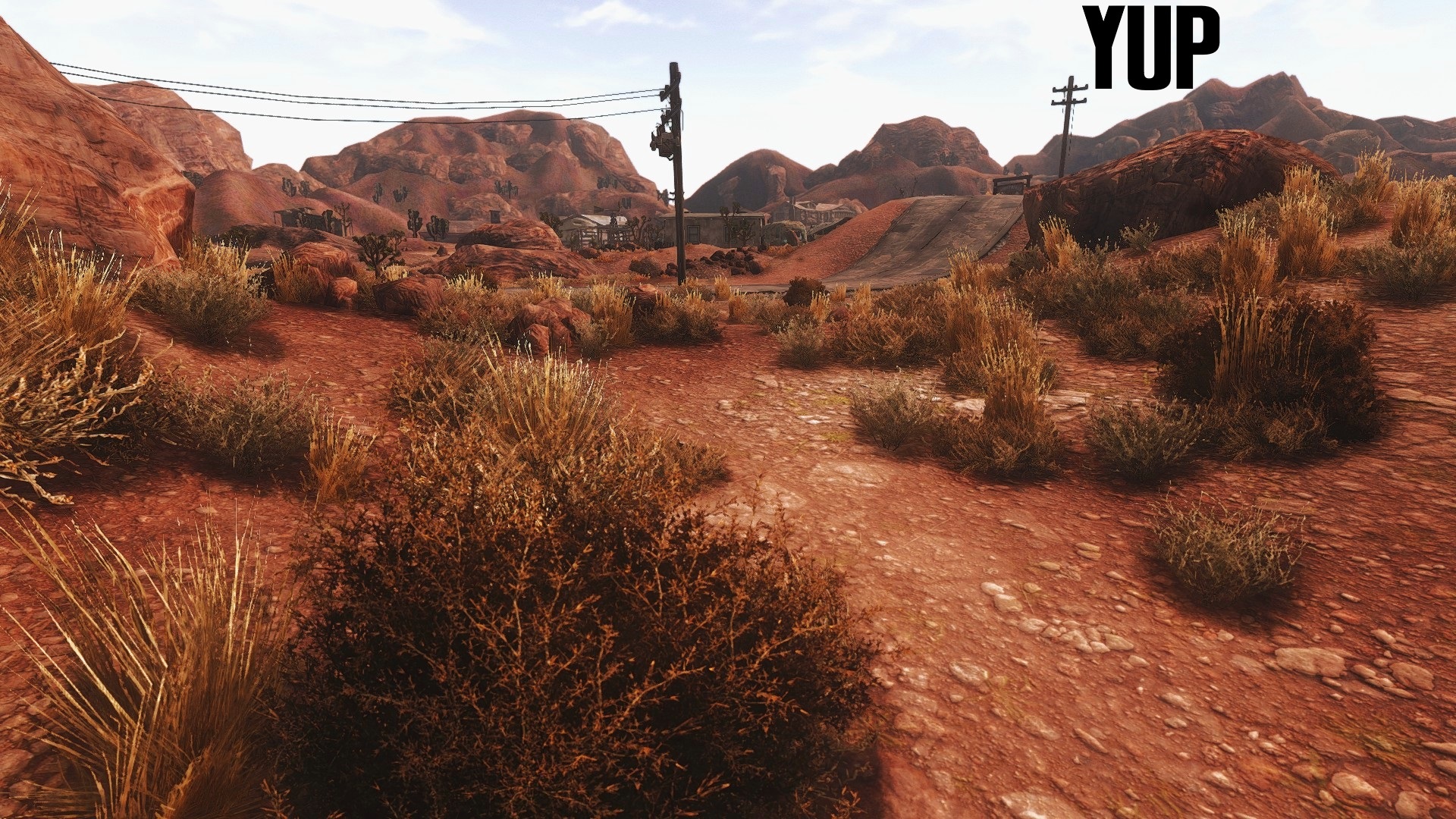 This mod works like a patch, If you’re looking for more stuff, or prettier stuff, this is not the mod for you. “So why would I install this?”, I hear you ask? 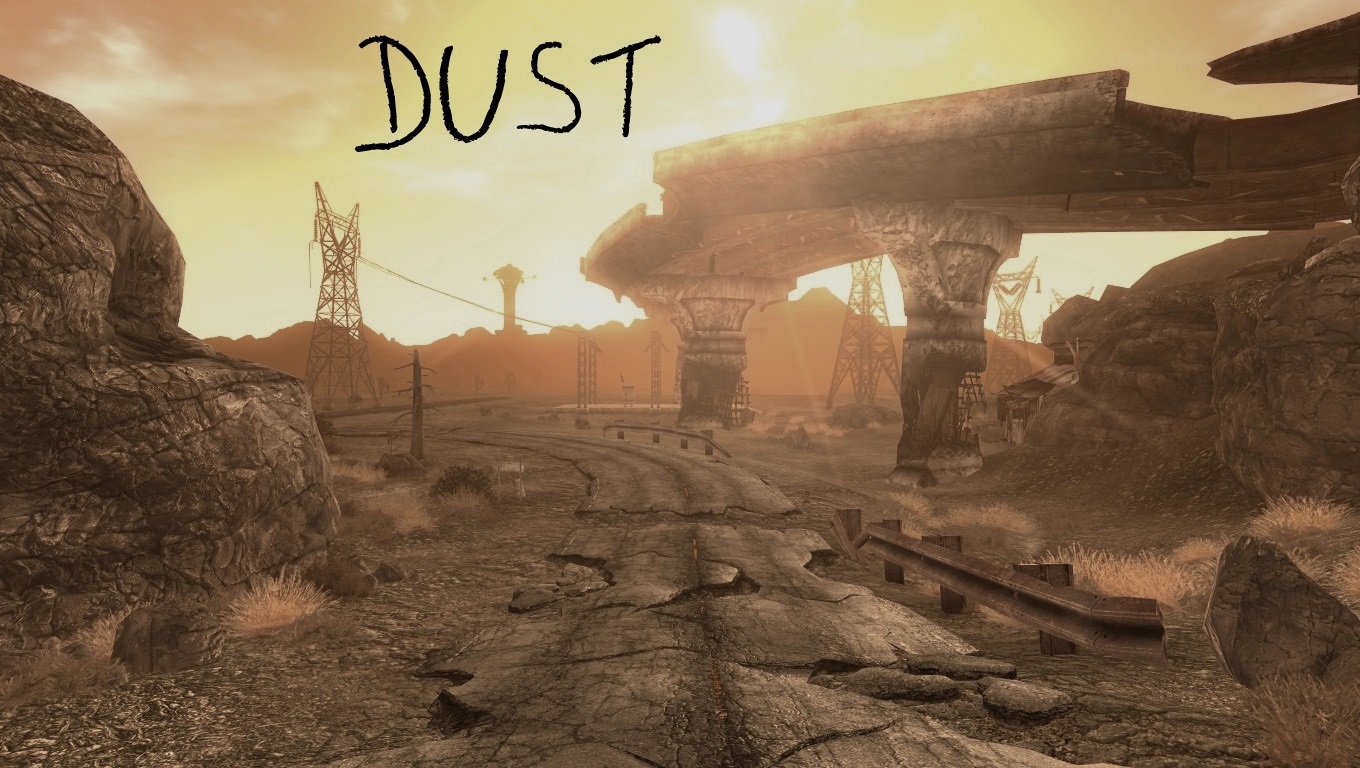 Did you ever wonder about the fate of the Mojave desert after the events of New Vegas? This DLC mod ties a few loose ends with details from the DLCs of New Vegas, while also being a damn hardcore survival simulator.

The list above introduced you to the biggest, most popular mods of New Vegas. But they’re really only the tip of the iceberg as far as the modding scene for New Vegas goes.

On this section, you’ll get a glimpse of some of the highlights of New Vegas modding.

Josh Sawyer’s Mod[twofoldsilence.diogenes-lamp.info]
Sawyers was the lead developer for New Vegas. So hell, he doesn’t even have to name his freaking mod, it speaks for itself. This mod makes your game tougher and more realistic, not for the faint at heart.

Animated Sweat Effect[www.nexusmods.com]
Sometimes you feel like there’s something missing from your game but you can’t pinpoint exactly what’s wrong with it. I mean, didn’t you ever wonder how your character ran across the Mojave desert for hours without breaking a sweat?

Animated Chems[www.nexusmods.com]
Simple yet immersive mod made by BlueBellFairy. Adds a great little high quality animation for whenever you inject a chem into your courier.

Animated Sleeping[www.nexusmods.com]
Another small yet immersive animation mod. This one plays the vanilla waking up whenever your character… wakes up.

Drugs Are Bad, Mkay?[www.nexusmods.com]
Now you can get high while playing New Vegas! This mod adds visual side effects for when you do them drugs.

Darnified UI[http//wwhttp]
Make Fallout use more of your screen when it comes to showing text!

DV’s Custom Soundtrack Project – Wasteland Music[www.nexhttp]
DeutscherVolker is awesome. Dude worked hard to create a mod that completely revamps the soundtrack of the game. Though you may be attached to the original soundtrack, why not give it a shot? Who knows, you might love it!

oHUD[www.http]
Let’s face it, you don’t need the HUD all the time. I mean, let’s enjoy the eye-candy without all this clutter getting in the way, shall we? When we need to fight something, it’ll be back. This is a handy mix of all three HUD mods made by Gopher.

The Mod Configuration Menu[www.nexusmods.com]
Another mod by Gopher. It’s a very handy little tool, integrated seamlessly into the main menu of New Vegas. With this, you can configure most of your mods while you are playing the game! Brilliant, right?

NCR Trooper Overhaul[www.nexusmods.com]
How can you side with a faction that has clothing with such low-resolution textures? Make the NCR soldiers look better while adding a bit more variety to them with this mod.

CASM[www.nexusmods.com]
Reduce those darn crashes with this auto-save mod.

Improved LOD Textures[www.nexusmods.com]
Make the horizon easier on the eye at the cost of no performance loss at all.

Goodsprings Home[www.nexusmods.com]
Tell you what, you’re not the only one who’s sick of that small, crappy Novac apartment. Who’d want to live in a place like that? I rather have a cozy little house in Goodsprings

Wasteland Flora Overhaul[www.nexusmods.com]
Why not spice up the wasteland with some grass and trees?

Realistic Headshots[www.nexusmods.com]
Remove the mysterious armor that are somehow under the skulls of every single inhabitant of the Mojave.

Weapon Animation Replacer[www.nexusmods.com]
This mod adds some more realistic animations for the game, if you’re bothered by the way The Courier holds his handguns and rifles, you should probably give it a shot.

Wasteland Clothing Hi-Res Retexture[www.nexusmods.com]
Makes all the outfits in the wasteland have higher resolution textures.

Caesar’s Legion Overhaul[www.nexusmods.com]
For a supposedly “legendary” faction, those folks look really pathetic compared to their enemies. Give them a fighting chance with this mod!

See You, Time For Bed![www.nexusmods.com]
Are you tired of simply staring at a black screen for half a second while your character is supposed to, well, be asleep? Well, me too! With this mod, you can now stare at your character for 30 seconds instead! Watch out for thieves though. Those guys are jerks.

Companion Sandbox Mode[www.nexusmods.com]
This will make your companions able to relax instead of just standing still like a robot when they’re not following you.

Fallout 4 Style Quickloot[www.nexusmods.com]
One very welcome improvement from Fallout 4 is the streamlining of the loot menu. This mod adapts that system into Fallout: New Vegas for your looting needs.

Enhanced Blood Textures[www.nexusmods.com]
EBT Replaces the vanilla blood textures with new high-resolution detailed blood. It also features new blood spatters to your screen when you get hurt.
Performance impact should be minimal.

Enhanced Grass[www.nexusmods.com]
Add beautiful vertex lightning to your grass, along with a neat animation that simulates wind.

HD Startup Screens[www.nexusmods.com]
Sick of those old, boring vanilla screens that pop up when you start the game? Give this a try, then!

Barber Mirror[www.nexusmods.com]
Simple mod that gives your apartment and house new mirrors, you can get yourself new haircuts by using them.

rePopulated Wasteland.[www.nexusmods.com]
If you’re gonna waste 500 hours of your life into a videogame, might as well do it with some company, right? With rePopulated Wasteland you have a whole new set of wastelander friends around you all the time!

Populated Casinos[www.nexusmods.com]
The casinos in New Vegas feel more lonely than the Mojave desert itself, and it’s a freaking desert. This mod fixes that particular qualm.

Well… That’s it. You have successfully modded you Fallout: New Vegas game!
I hope you enjoy it, and if you also dig Fallout 3 and Elder Scrolls, don’t forget to take a look at Fallout 3: Enhanced and Skyrim: Enhanced!

If you have any issues or questions, don’t be shy! Post a comment so me and my friend ~Jp will give you a hand with whatever trouble you have.